Valve designed the Steam Deck from the ground up to support suspend and resume, allowing for convenient on-the-go play. 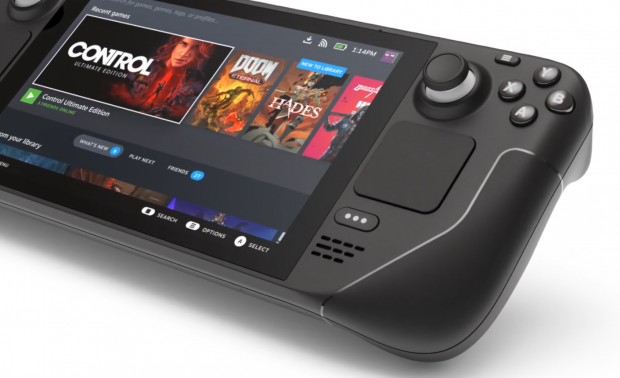 Quick and easy access is one of the biggest advantages of mobile gaming. It's incredibly important that consumers can jump right into a game from a click of a button without waiting. Like Nintendo with its Switch, Valve designed its new Steam Deck handheld-PC hybrid with this seamless access in mind. Only Valve put a dedicated suspend/resume button right on the Steam Deck--a feature that was planned from the get-go.

"We all agreed early on that we needed that feature, that it would be a core part of how people experience the device. As we've seen, many other mobile platforms, how people use their phones...that's what they're used to. Press the button and everything comes back up the way they left it," Valve developer Pierre-Loup Griffais said in an IGN interview.

"Most of the work was actually more on the lower level OS side in collaboration with AMD. We've worked a ton on getting that stable but it's rock-solid now and we're really happy with where it's at."

The Steam Deck converges both PC and mobile gaming together in one package, combining the instant access and convenience of mobile gaming with the flexibility, power, and huge library of games offered on Steam. The result is something that may shake up the PC games market.

"It came up in the earliest conversations with AMD, also with Steam developers internally. We needed to make sure that suspend and resume--just putting a game down and picking it back up==was something that was accommodated by the design of the system at the lowest level," said Valve designer Greg Coomer.

"The power envelope to maintain a session across putting a game down and picking it back up, but also the speed of which you can do it. One button puts the device in that state, and more importantly, the speed in which it will resume. It's pretty impressive."

"We didn't want to lose sight of that feature. It had to be buttoned down, it's not like that was the hardest feature we implemented, but we needed to not let it slip by and then end up being a poor experience in the end."