Facebook is preparing an alternative storefront for the Oculus Quest standalone VR system. The company currently keeps tight requirements for apps on the official store. Many app developers have been forced to look for alternative distribution methods for their software because of it. 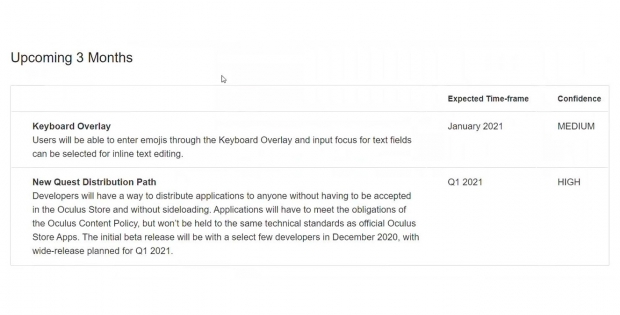 SideQuest, the unofficial alternative content store that allows you to sideload unapproved Quest content on your headset, was born of necessity when Facebook started leaving some developers high and dry. SideQuest has thus far operated in a grey area neither against Oculus's terms of service nor adhering to Facebook's vision for its VR platform. Thus far, SideQuest has skirted any severe backlash from Facebook, but that might be about to change next year whenFacebook rolls out its new distribution plans.

Facebook notoriously makes life difficult for developers that build things that it sees valuable to the core Oculus platform. Take Yur Fit, for example, Facebook has repeatedly patched the Quest software to break the functionality of Yur Fit, and it has now rolled out a system-level fitness tracking system that renders Yur Fit all but obsolete. Why wouldn't Facebook do the same to SideQuest once it has a similar solution available?

SideQuest is in a strong position right now, with newly acquired funding and the publicity of support from Oculus founder Palmer Luckey. But none of that matters if Facebook decides it doesn't want SideQuest around anymore.

Facebook said that its new platform would roll out in Q1 2021. We'll see how things play out when that happens.