bHaptics today revealed a pair of haptic feedback vests that are sure to bring an extra level of immersion to your VR gaming experience. The company is taking pre-orders now, with delivery expected before the holidays.

bHaptics' TactSuit X series comes in two flavours. The TactSuit X16 is the entry-level option. It features 16 ERM vibration motors, with eight on the back and eight on the vest's front. The X16 comes equipped with a 4900mAh battery, which gives it a claimed 22hrs of playtime.

The higher-end TactSuit X40 is packed with 40 ERM motors to add more realism to the haptic response. The extra vibration motors come at a high cost on power. The battery in the X40 has twice the capacity at 9800mAh, which gets you 18hrs of playtime.

bHaptics said that both vests are one-size-fits-all garments. That adjustable straps support chest sizes between 25" and 50". The X16 variant is a shorter garment, which bHaptics said enables you to wear it while seated. The X40 is meant for standing games.

Aside from the number of motors, both TactSuit X series vests offer the same features. Both vests offer two input modes, including wireless Bluetooth 4.0 and a wired audio jack option. The TactSuit X series vests are also SteamVR compatible, with at least 50 titles with native support. The vests also support audio-to-haptics mode so that you can use it with any gaming experience, even with your PlayStation or Xbox console. 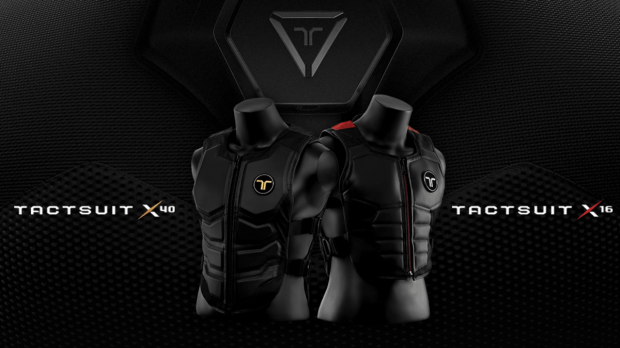 bHaptics is taking pre-orders for the TactSuit X16 and X40 vests from now until December 9, and it plans to ship the first units to customers on December 10. The entry-level X16 model starts at $299, and the X40 option is $499. bHaptics said that pre-order units would also include a bonus accessory kit with an audio cable, and Y-jack for use with Oculus Quest, and a mesh lining for the vest.