In a recent earnings call, EA said gamers can upgrade current-gen games to next-gen console versions for free. Turns out there's some limitations and fine print attached to that policy, and they hint EA could release two versions of their future games: a current-gen one, and a next-gen copy.

Today EA confirmed Madden NFL 21 would support Smart Delivery on Xbox Series X. That means you get access to the enhanced next-gen version even if you buy it on Xbox One. But there's a catch: The offer, as EA calls it, is only available for a limited time.

A recent press release outlines the details surrounding Madden 21's next-gen free upgrade: "To receive the offer, players must purchase Madden NFL 21 on Xbox One by December 31, 2020 and upgrade to Xbox Series X by March 31, 2021." The entire thing is head-scratching. By 2021, Madden NFL 21 will be obsolete and replaced by another annual NFL game. That's how EA operates.

So what does this mean? The only real reason to impose this restriction is if EA plans to sell separate next-gen PS5 and Xbox Series X SKUs at the same time. From the sound of it, that's actually likely to happen.

"The development teams at EA are always pushing the envelope to leverage new technology in exciting ways that benefit their fans and we're thrilled by the work they've done in optimizing Madden NFL 21 for Xbox Series X. We're delighted to be partners as we usher in the next generation of gaming."

In a recent earnings call, EA CEO Andrew Wilson said annualized sports games will push first onto next-gen consoles: "EA SPORTS will also lead for us on the next-generation consoles this year."

Coupled with the weird timed availability of free next-gen patches, it certainly appears EA plans on releasing optimized next-gen versions of its games in stores as disc-based SKUs. Nothing's been confirmed, though, and we're just speculating.

This "offer" comes just a day after EA CEO Andrew Wilson promised the company will start embracing new mediums and platforms. EA is bringing "multiple games" to the Nintendo Switch, it's dropping a bunch of its most popular games on Stadia, and it's also bringing EA Access to Steam. 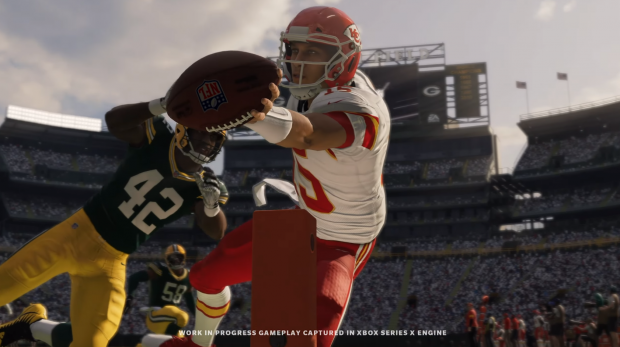