At the moment, we are currently on a short break from Rick and Morty Season 4, so to make the wait just that little bit easier, Adult Swim has released some shorts.

Before I get into what is shown in each of these videos, I must warn you that if you aren't up to date with Season 4 Episode 5, then these videos will be spoilers of some episodes. I'd advise you to go and watch the episodes before checking out these videos, as I believe you will enjoy them much more after you have seen the episodes.

Moving on now to the contents of the above video. This video is from Season 4 Episode 3, 'One Crew over the Crewcoo's Morty' where the whole episode is one big rip on Heist movies. In the video, we watch Heist-o-Tron attempt the greatest heist of all time - steal a planet's core without its inhabitants knowing.

The next video is from episode 1 (Edge of Tomorty: Rick Die Rickpeat) Season 4, its the tag at the end of the episode where Jessica says she wants to comfort the "lonely" people out there. This doesn't sit well with Morty, considering all of that episode he was trying to dodge death to be with Jessica, which eventuated to the whole world knowing him.

The last video is from episode 5 (Rattlestar Ricklactica) where Morty gets bitten by a space snake and kills it in rage. Feeling bad about what he has done, Morty takes Rick's space ship to the snake planet and gives them a replacement snake from Earth. The snakes on the planet view this extraterrestrial snake the same way we would view an alien if it came down to Earth. Then things get weird.

The second half of Rick and Morty Season 4 should be returning sometime in late January. Pringles is making their own Pickle Rick chip flavor, check that out here. 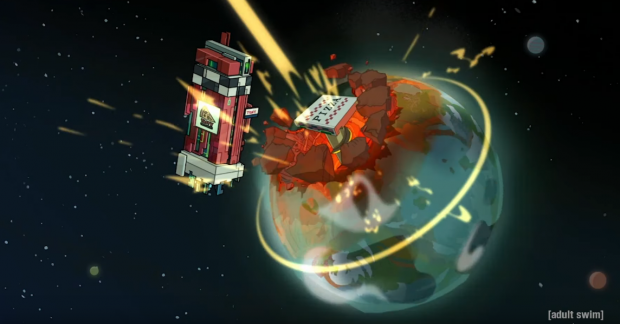