Activision-Blizzard have been on seriously hot water, along with a large list of companies bowing to Chinese censorship pressure, but now Blizzard Entertainment (wholly owned by Activision, don't forget that) has buckled under pressure from gamers. Blizzard is even issuing 1000-year bans on their forums (yes, 1000 years -- that's not a typo). 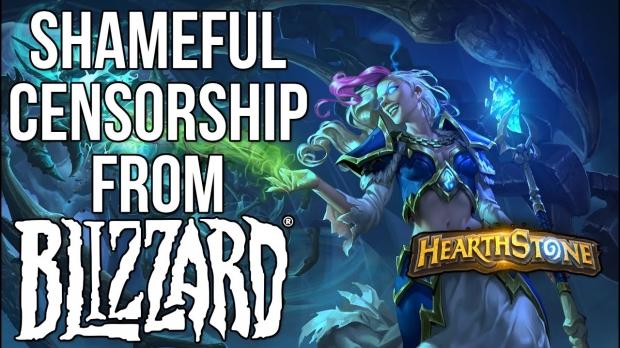 Blizzard Entertainment president J. Allen Brack said in a statement on Blizzard's website that Blizzard didn't make their decision to suspend pro-Hearthstone player Ng "Blitchung" Wai Chung or take his prize money because of his views of what's going on in Hong Kong.

Brack explained: "The specific views expressed by blitzchung were NOT a factor in the decision we made. I want to be clear: our relationships in China had no influence on our decision. We have these rules to keep the focus on the game and on the tournament to the benefit of a global audience, and that was the only consideration in the actions we took. If this had been the opposing viewpoint delivered in the same divisive and deliberate way, we would have felt and acted the same".

In his lengthy post, Brack explains that Blizzard has some core values that include Think Globally (except China); Lead Responsibly (only sometimes); and importantly, Every Voice Matters (as long as you don't criticize China). I've obviously inserted my own bits there because it feels like a slap in the face from Activision-Blizzard.

Brack asks himself "what could Blizzard have done better, and where do we go from here?" to which he answers: "Over the past few days, many players, casters, esports fans, and employees have expressed concerns about how we determined the penalties. We've had a chance to pause, to listen to our community, and to reflect on what we could have done better. In hindsight, our process wasn't adequate, and we reacted too quickly. We want to ensure that we maintain a safe and inclusive environment for all our players, and that our rules and processes are clear. All of this is in service of another important Blizzard value-Play Nice; Play Fair".

He added: "In the tournament itself blitzchung *played* fair. We now believe he should receive his prizing. We understand that for some this is not about the prize, and perhaps for others it is disrespectful to even discuss it. That is not our intention".