AMD has confirmed that it will be launching its next-gen Navi GPU architecture in Q3 2019, with the news coming directly from the company and its recent earnings call. My exclusive industry sources told me Navi will launch at E3 2019, with the press to be invited in the coming weeks leading up to Computex 2019. 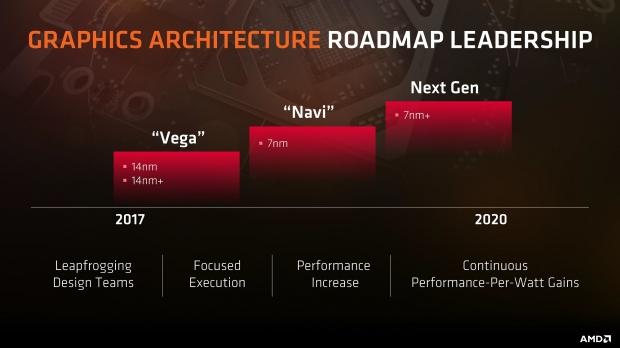 Navi will be made on the new 7nm node, the second GPU on the 7nm node after AMD's recent Vega 20 launch inside of the consumer-focused Radeon VII and the professional/data center-focused Radeon Instinct accelerators. We don't know much about what makes Navi tick, but we do know from our exclusive story that Sony worked hand-in-hand with the RTG engineers on the Navi architecture for its next-gen PlayStation 5 console.

Just recently Sony confirmed it will be indeed using a custom Zen 2-based CPU and custom Navi GPU-based design inside of its upcoming PS5 console, and we can presume Microsoft will be using the new 7nm-based tech inside of its next-gen Xbox, too. Rumor has it the PS5 will be priced at just $399, too.

All roads right now lead to Computex 2019 and not even two weeks later E3 2019 where AMD will officially launch its next-gen Navi GPUs, with public availability starting 7/7.