The specially themed bundle isn't the first one we have seen for the Nintendo Switch, just a few days ago I reported on the Pokemon Let's Go Eveee/Pikachu themed bundle. The Super Smash Bros. Ultimate Nintendo Switch bundle has gotten a very similar treatment, we can see from the images released onto the Nintendo America Twitter page that Nintendo has decided to go with a black and white theme. On the front of the dock we can see the characters Samus, Mario, Kirby, Fox, Donkey Kong, Breathe of the Wild Link, Yoshi and Pikachu split to different sides. Picking up the left Joy-Con controller, we can see white/gray lines running from the top to the bottom, we can also see another white line stretching across to the right hand Joy-Con in a horizontal fashion. This is of course the Smash symbol.

In my personal opinion, I'm not really a fan of the bundle being black and white, I would of much preferred to be hit all those beautiful different contrasting colors from each of the respective characters. I don't really mind that the Joy-Cons are black and white, but I just feel as if the choice of having the characters on the dock black and white was wasted potential from what could of been an amazing looking Switch dock. The Super Smash Bros. Ultimate themed Nintendo Switch bundle will come with a download code of the game and will be available on November 2nd. For more information, visit the official Nintendo website here. 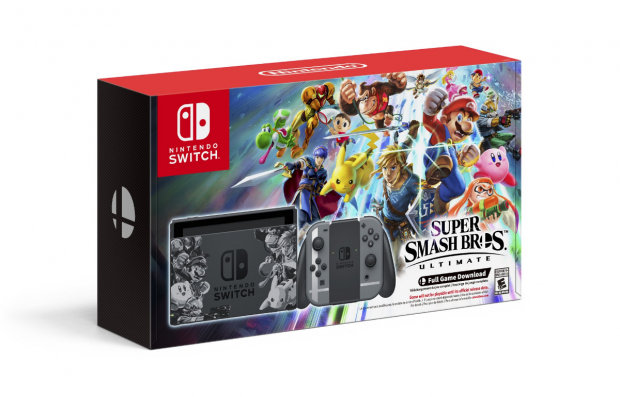