Apple iPhone 6 models have been the subject of controversy and swirling rumors lately due to constant rebooting issues. Industry insiders opined that the crashing and reboot loops, only present on specific iPhone 6 models, is due to the use of TLC NAND. TLC NAND is denser and marginally cheaper than its MLC counterpart, but suffers from less endurance and lower performance. Apple only uses TLC NAND in select models with a lot of storage, and the 64GB iPhone and the 128GB iPhone 6 Plus are perfect examples. Whether or not TLC is at the root of the issue remains up for debate, and reports are circulating that Apple will abandon TLC entirely. Kbench, a Korean benchmark developer, has released tests of the 64GB iPhone 6 with MLC NAND against the same model with TLC NAND. 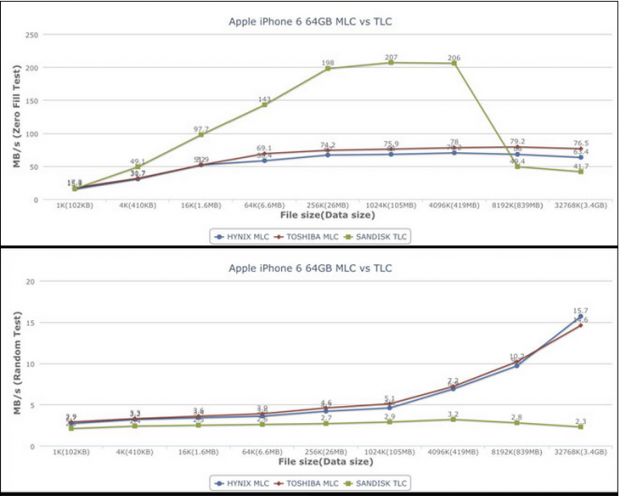 Unfortunately the released tests are limited to write benchmarking. TLC has inherent limitations with random write activity, but fares much better with read workloads. Mobile devices aren't subjected to as much heavy random write data as PC's, and as a general statement TLC fares well with sequential data. We mention this because these tests focused on random write data, which is the worst case scenario for mobile devices. Some read performance benchmarks would also be very helpful, and we are reaching out to Kbench for read performance results.

The Zero Fill test (at the top of the graphic) shows TLC blowing away the MLC competition. Zero Fill isn't a real-world test, it merely writes zero's to every address on the storage device. What isn't mentioned, however, is that this amazing speed with TLC hints at possible compression technology. It is interesting no one has connected the dots on this. SSDs that utilize compression and data reduction technology write Zero Fill data extremely quickly because compression algorithms can compress zero's so well that very little data actually hits the flash. One of the biggest challenges with TLC NAND comes on the endurance front. TLC NAND does not last as long as MLC NAND, and compressing the data results in less data actually written to the NAND, thus increasing endurance. Apple spent an estimated $500 million for Anobit, a company that was brought in specifically to increase the endurance of TLC NAND. Anobit doesn't entirely explain how they accomplish this feat, but adding compression in tandem with other techniques makes perfect sense.

The second graph denotes random write performance of MLC v TLC NAND. We expect lower performance from TLC NAND in random write workloads, and that is exactly what we get. TLC NAND is significantly slower, but the workload might not be representative of actual use-cases with mobile devices. While the results are interesting, they shouldn't be taken as a particularly damning assessment of iPhone 6 TLC performance. Sequential testing would be very relevant, but no information is currently available.

Another interesting issue pops up in memory usage monitoring. The memory use of the device with TLC NAND is significantly higher than with MLC NAND. On the surface that might be a bit confusing, but there could be several reasons for this. We have seen recent advances in SSD technology that allow the host to manage the flash directly, and Apple may be using the processor to partially manage the flash. Another possibility is that in lieu of running a sophisticated compression algorithm on the SSD controller, Apple is simply using the iPhone 6's processor to accomplish the task. What would be most telling is if the researchers monitored the CPU usage during a write workload. Excessive CPU usage with TLC NAND on the iPhone 6 Plus would be a definite clue as to whether Apple is using the processor to aid storage performance.

Manufacturers always walk a fine line between cost and performance. If users cannot perceive a difference in performance there is no need to install the fastest storage available. At last check there haven't been any widespread complaints of some iPhone 6 models being slower than others, so the slower performance of TLC may still fall within an imperceptible range to the end-user. Interesting results indeed, we will keep you updated as we receive more information.