The Samsung Galaxy S III comes with a load of new features, with many of them as suspected prior to launch. Several new things have also been added to the phone are extremely cool. For one, the front-facing camera tracks the user's gaze so that the screen will not lock while the user is looking at the screen. 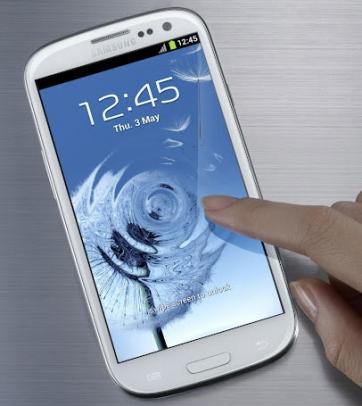 The device features the new Exynos 4 Quad-Core 1.4GHz CPU, 1GB of RAM, 16, 32, or 64GB of storage, and radios for Bluetooth 4.0, WiFi, and NFC connectivity. The front side features a 1.9MP camera which is used in the above described feature. The backside features an 8MP camera which can take HD video along with burst photos.

The screen is a 4.8-inch 720p Super AMOLED display. The device seems capable of accepting voice commands and also senses when you pick it up to make a call. It can also wake on a voice command. It is available in two colors: "Pebble Blue" and "Marble White."

Wireless charging is also available without an additional case. This phone has more features than you can shake a stick at or than I can list. The Galaxy S III will be available in Europe by the end of May and is looking at a summer launch for the United States. This phone very well could beat the iPhone. More as it comes.