DICE are constantly tweaking Battlefield 3 and the latest news comes from Alan Kertz, Gameplay Designer at DICE, who has stated through a post on Reddit that there will be several changes to weapon attachments in Battlefield 3. 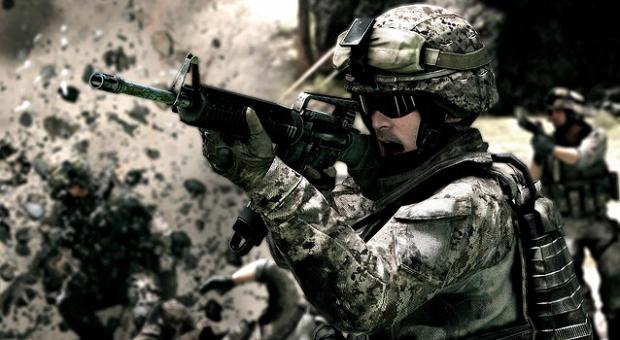 He listed various stat changes for the bipod, foregrip, suppressor, heavy barrel, and flash suppressor. Now we just need some more maps like the ones included in Back to Karkand, which feel like proper PC-made maps, well, because they are. The game is slowly getting perfected, which shows some strong commitment to longevity of the game from DICE. The full change list is below (and in the full story):

The Foregrip is for players who who are in close combat and highly mobile fighting situations. It reduces the horizontal recoil forces that make maintaining a consistant aim on target difficult, however it makes aimed shots more difficult.

+34% reduction in horizontal recoil (adjust based on gun)

-20% penalty to base accuracy when aimed

The Bipod is for Players who wish to setup a position and hold it against the enemy, or make long range shots effectively. When deployed recoil and dispersion are substantially reduced and scope sway is eliminated (except under suppression).

+Reduction in horizontal and vertical recoil (% depends on gun type)

-Has to be setup to get the benefit

The Suppressor is for players who are mostly focused on Stealth. It uses low velocity rounds, which means better stealth at the cost of reduced range. The Suppressor adds bulk to a weapon due to its size, making firing from the hip more difficult, though a high quality Suppressor provides a small aimed accuracy bonus and reduces the muzzle rise when firing.

+Does not appear on minimap when firing.

-Reduced range for both min and max, damage stays the same.

-50% penalty to base accuracy from the hip

+25% bonus to base accuracy when aimed

The Heavy Barrel is for players who are focused on Accurate Aimed fire. It uses high velocity rounds, which means the bullet drop is reduced and the max range of the weapon is increased at the cost of an increase in auto fire dispersion. The Heavy Barrel adds bulk to a weapon due to its weight, making firing from the hip more difficult, though it gives a substantial increase in aimed accuracy bonus.

+50% bonus to base accuracy when aimed

-25% penalty to base accuracy from the hip

The Flash Suppressor is for players who want some additional Stealth, without the range and accuracy penalties of a Suppressor. It works as a recoil compensator, reducing recoil, though it adds a slight bit of bulk making firing from the hip more difficult.

-20% penalty to base accuracy from the hip

If you play Battlefield 3, what are your thoughts on the changes?