All NewsBusiness, Financial & LegalCases, Cooling & PSUContests & GiveawaysCPU, APU & ChipsetsDealsDisplays & ProjectorsGamingMotherboardsScience, Space, Health & RoboticsStorageVideo Cards & GPUsVirtual & Augmented Reality
All ReviewsAll ArticlesAudio, Sound & SpeakersCases, Cooling & PSUCPUs, Chipsets & SoCsComputer SystemsDisplays & ProjectorsGamingMotherboardsNetworkingPeripheralsRAMStorageVideo Cards & GPUs
GuidesGamingAsk the ExpertsNewsletterAboutPrivacyForums
AMD Zen 4Intel ArcBattlefield 2042RTX 3090 TiRTX 4090RTX 4080GTA 6Elon MuskHDMI 2.1
Wearable Computing & Fashion
CES 2010 - During our trip to Las Vegas we had the chance to stop by the Vuzix booth and not only take a look at their new product line but also to talk to them about where they see their product in the emerging market of 3D TVs and monitors.

Vuzix, for those of you that are not familiar with the name is a company that makes hear/eye-wear for a virtualized (or augmented) viewing experience. They have been in the game for a long time and actually manufacture products for military use as well as consumer grade products. Their newest line is called the Wrap. This line up is interesting in that it is the first time someone has tried to make this type of eyewear look like a real set of sunglasses. 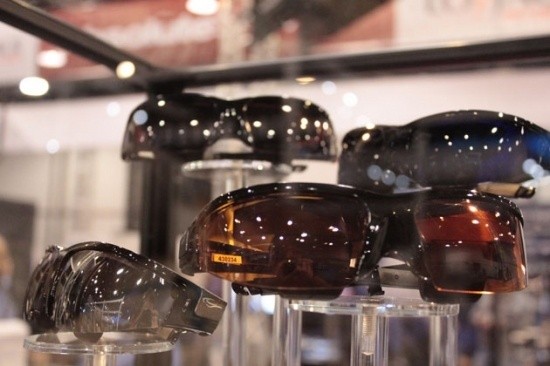 Unfortunately the technology needed to present a virtualized experience like the Vuzix Wrap does is still quite bulky. This means that even though on the outside they look like a pair of sunglasses when you put them on they will typically sit about an inch away from where a standard set of glasses would sit. When I put the Wrap eyewear on the first thing I noticed was the uncomfortable nose piece; the hear set is just a little too heavy for this type of nose piece and it felt like all the weight was pushing directly down on the bridge of my nose. I also felt like the Wrap was going to fall forward off of my head. 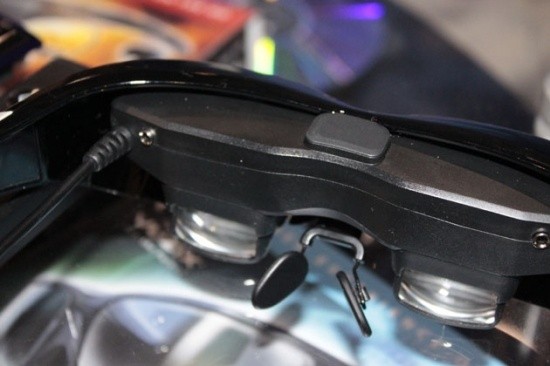 The viewing experience was not bad although it did take a little while to get things into focus for my liking. 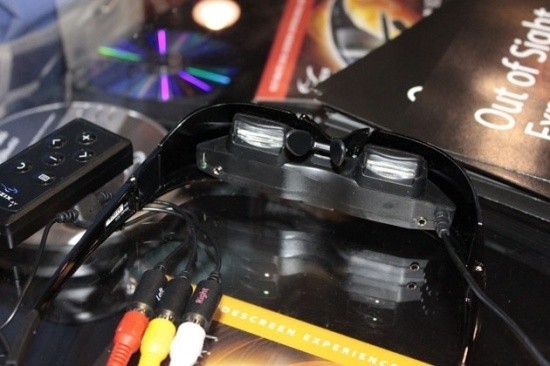 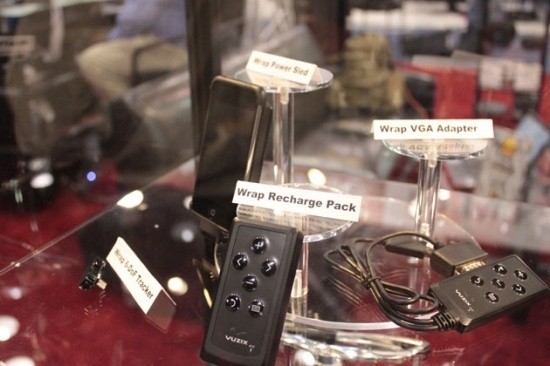 Overall I think that Vuzix has some work to do for these to be adopted for mainstream use. The Wrap is a great step forward over the older line from Vuzix but they still need some work.

We spoke with one of the guys at the booth about the product and also about the company as a whole it was an interesting talk and did give me a better idea of where Vuzix sees itself in the market. One of the first things I wanted to know was how Vuzix saw the new 3D technology impacting their business. The answer was short and simple. The new 3D monitors and TVs should not have an impact at all; the Vuzix Wrap and other products are meant as a mobile solution for PMPs not for home use or even for a laptop. As such they are one of only a handful of products that offer a virtualized "big-screen" viewing experience and 3D support.

Next I asked about Vuzix's apparent Apple centric product design and was also informed that at one time they fully supported the Zune as well as VGA out. However, after market testing they found the demand for these adapters was not great so they discontinued support for them. They did say they are considering making an adapter for the Zune HD once it can show that it is a viable option in the market for a PMP (are you listening Microsoft?).

Our last question was a more technological question. We wanted to know if Vuzix envisioned a time when the bulky mini-monitor technology would disappear and a more flexible type of display that would actually use the eye-piece would be available. As expected I got the usual answer "I cannot talk about that", but this was quickly followed by a comment saying that Vuzix is always working on new technology and enhancing their product line to offer the best solution for their customers. This comment basically means they are probably working on it but it is not at a state where they are free to talk about it. I would assume something like this would be first developed for the military (they have the bigger budgets and more money to spend on R&D) but would eventual make its way to the consumer level.

While we have not been able to fully test the new Wrap line from Vuzix we do hope to get our hands on one soon so we can tell you more about how they perform; for now we have to leave you with our short 10 minute time with the Vuzix Wrap.
Newsletter Subscription