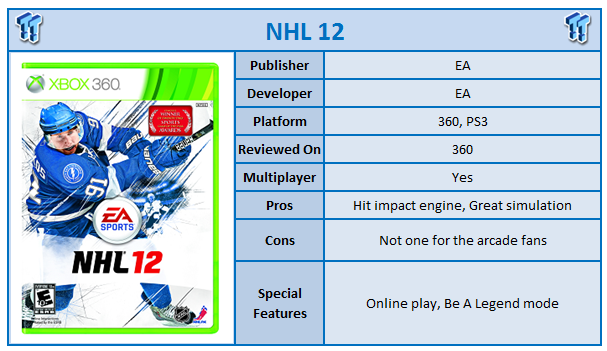 A few years ago the NHL suffered a lockout which caused the sport to lose an entire season of play and put the playing futures of many players in jeopardy. Much like the NFL and NBA lockouts of 2011, the NHL lockout put the focus firmly on the gaming side of things with the only way able to gain hockey action that year was to play a game. Once the NHL returned to the rink, it was widely reported that the NHL found the continuing relationship with EA invaluable as it kept the NHL in fans minds during that lockout and since that day, NHL has been getting better and better with EA producing what is (and what will most likely continue to be) the leading hockey sim around.

The 2012 product is now here and promises a number of enhancements for hockey fans around the world. As you would expect, the game contains the usual suspects of season mode, exhibition and playoffs, but where most players should be spending their time is the GM (General Manager) mode maintaining a team from both a playing, financial and roster aspect.

On the surface, NHL 12 (like many EA properties) looks the same as the previous titles, but once you dig under the top you start to see why NHL has won many gaming awards over the past few years. If you want a game where bashing and crashing and fast paced hockey is the game, then NHL 12 is not for you. NHL 12 does not offer what you would call traditional hockey gameplay and it tries to simulate the sport more than ever before. If you actually watch the NHL, you will know that big hits that absolutely smash a guy off the rink are quite rare and that is the case in NHL 12. 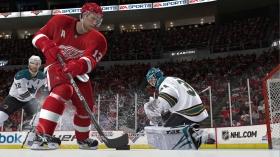 At first as someone who does not follow the NHL that closely, that did puzzle me. I have played many hockey games in my time and most have focused on big hits and fast paced skating. However, after putting many, many hours into NHL 12, I realised that EA made the right decision. Rather than bashing and crashing the boards to get a goal, it takes meticulous strategy and build-up play. This makes goals all the more rewarding and as you learn the mechanics of the game, you start to appreciate the finer aspects of the sport of hockey. Everything a simulation of the sport should do.

However, for the bash and crash fans it is possible to somewhat increase the frequency of big hits and the speed of the game through the tuners. Always lamented by hardcore fans, tuners allow you to change the speed of the game, the size of the hits, how well players control the puck etc. and this leads to each gamer being able to tweak the game exactly to their needs. You can also set how much a players ratings affect the way they play on the ice which allows you to bring the not so strong teams in line with those who dominate the league in real life.

Once you've won the cup with a team, it's time to build your own career with the Build A Legend mode returning again. This allows you to work up a player built character from the miners through to one of the best players in the game and this mode is an enjoyable aspect of the game.

This mode now also includes some of the greatest players of all time including Wayne Gretzky and Mario Lemieux. One major improvement to this mode is that you can now simulate shifts where your player is not on the ice, making it more accessible to those who don't want to sit around watching the AI play hockey.

You can still join the EASHL and play online in teams with your friends to try and become the worlds best team. The multiplayer again continues to be impressive in this title and you can play it on Xbox Live or local.

Visually, as you would expect, the game continues to impress. When the players take their helmets off it's easy to tell who they are and the big hits and animations are just as good. You tend to be able to predict when an injury has occurred by how big the hit was and how the player reacted on the ice. Sometimes a player will take a little while to shake a hit off, whilst others will leave them flat on the ice in pain awaiting treatment. The collisions have been worked on again this year and whilst it is difficult to pull huge hits off, the visual style when you manage to do it brings home just how heavy collisions can be when two big forwards hit.

The commentary is again impressive and it's the first time in a long time we have played an extended period with a game and not heard an out of place comment. For example, in the past we've heard commentators ignoring goals being scored and just continuing on with sideline comments, but this year they seem to have got it one hundred percent right. Given the speed and pace of the sport, that's quite an achievement.

NHL 12 continues the tradition EA has built over the past few years with its hockey title and it is likely to be up there again come the awards season later this year. What EA manage to do with the NHL series is showcase what ice hockey is all about. It's about meticulous movement of the puck and yes, big hits, but unlike in the past it's not a case of bashing and crashing your way to victory. There is simply no better ice hockey sim on the market today.