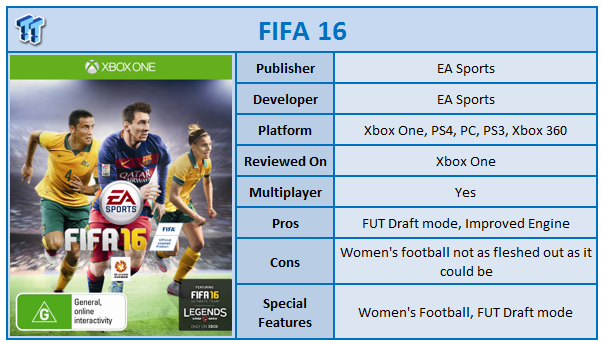 There is no doubt that FIFA 15 was the game that brought next generation gaming to the series. The first outing with the console launches, while improved, did not take too much advantage of the hardware but the second outing last year was one of the games of the year. So where was EA to go from here? They had crafted the best football game on the market, but little did we know that EA had some more tricks up its sleeve. Not only does FIFA 16 improve upon its predecessor in expected ways, it also has a few tricks up its sleeve, and two brand new modes that are sure to keep gamers happy with the franchise for yet another twelve months.

There are two brand new modes to the series this year; women's football and FIFA Ultimate Team Draft. FUT draft is an extension of what has become the premier feature of the FIFA series. For those of you who don't know, in FUT you build up a custom team of the world's best players by earning or purchasing cards. Each of the players has individual stats and contribute to making your team either a world beating galactic team or that of an also-ran. The appeal in this mode comes from the fact that you can challenge people online easily and see just how your team compares. 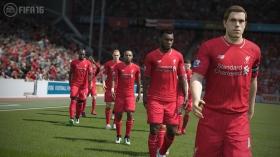 In FIFA 16, EA has taken this to the next level with FUT Draft. FUT Draft is for those of us who want to play a customized version of FIFA but do not have the time or inclination to build a team over a period of months. It's also the perfect addition for a party game. Sit down, choose a formation, captain and squad players from five randomly chosen cards in each position and get on with the match. There is a certain element of luck to this based on the random draw, but it does allow players to experience FUT without having to commit months of hard work like the top players do. This is a smart addition to the game and a natural extension of the FUT concept. 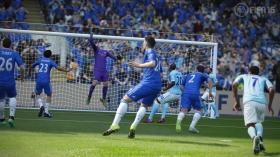 The other key new mode is women's football although it may not be as fully fleshed out as some would like to see. It has been interesting in some ways that it has taken this long for EA to get a female component of the game done given the popularity of female football in the US. However, they wanted to get it right, and they have. There is a clear difference to how the females play in the game, and it very much reflects that of the real-world style differences between the two sexes. While crunching tackles still occur, it's more about technique and skill and the movement of the players is a bit different as well. The women teams are fun to play, but the mode is not as fleshed out as it could be. There is no league format (only an international team available), and you cannot create custom female players, something that will no doubt disappoint female fans of the series. Still, it's a good start, and hopefully EA uses this to build upon in the future.

In terms of what else has changed since last year, the Ignite Engine has had a slight overhaul. EA copped a lot of criticism from players last year about the rag-doll physics and unrealistic ways that players crumpled to the turf after tackles. Although the physics somewhat remain, a lot of the concerns have been addressed in this year's game.

An interesting addition is that after particular hard challenges players will writhe around in pain before slowly getting up or staying down injured. It's about a 50/50 as to whether an injury occurs. Previously if a player stayed down, you knew an injury had occurred but now that's not necessarily the case. As well as this, the Xbox controller will vibrate during crunching challenges as well bringing how the physical nature of the sport.

The other focus and change this year is in defense. EA stated before the release that they had put a lot of work into defending AI and this shows. We found it much more difficult to score (rather than just powering through the defense, we had to find skillful openings) and the goalkeepers are near impossible to beat on even the moderate difficulties. This is a game that will make you fight for your goals and make you think about how you are shooting. Just running through and shooting will not cut it this year. 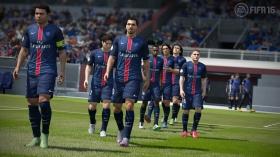 The presentation of the game remains second to none and alongside the Barclays Premier League having full graphics, stadiums and likenesses the Bundesliga from Germany has joined the party. All the stadiums, TV graphics and other niceties from the German league are present. We have to admit we were shocked that Spain was not the second cab off the rank, but it's clear now that EA intends to overhaul one league per season over the course of this console generation. Those of you who are fans of these leagues will find stunning commentary, visual graphics, and realism. Those of you who are fans of other leagues may feel a bit short-changed, but even the generic presentation is top notch. 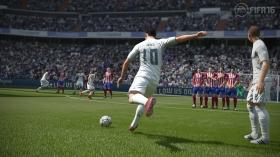 FIFA 16 is a natural extension of what was a phenomenal game in 15. It is a shame that what many may consider the big new feature, women's football is not as fleshed out as it could be, but they have laid a platform to build on. FUT Draft is a smart addition that will allow those short of time to participate in the unique game mode, and the other core modes make a return. Sometimes it's hard to recommend buying a sports game year in year out, but with FIFA, EA always seems to do enough to make that yearly purchase justified. Pro Evolution Soccer has had a strong year this year and is catching up so FIFA 17 will be one to watch. For the moment, though, 16 is worth your dollars.