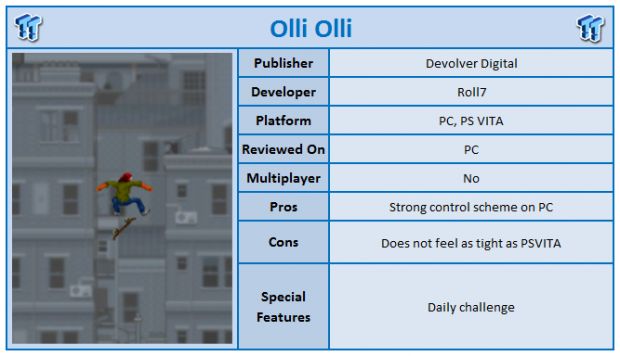 Earlier this year, a cracking game hit the Sony PS VITA system called OlliOlli. It was a return to the spotlight for skateboarding games, which over the past few years have become something long forgotten. It's quite amazing really when you look back at the heyday that the skateboarding genre had.

I remember attending many press events for Tony Hawk skating games and people wanting to know every single bit of detail. Well, OlliOlli has again come back to show the world that skateboarding can still be fun in the video game format. This time, however, it's on the PC, and whilst it was a smash hit on the VITA, the PC offered new opportunities and challenges. So, it's time to see how this smash hit VITA game has translated to an entirely different platform.

Like its VITA counterpart, the game is all about emulating the culture of skateboarding in a video game format. You control a little man on screen and use the various keys (or gamepad) to perform tricks that many of us could only dream of doing with the skateboard. However, this is not a game that is about tricking - it is far more than that. Putting together good runs is not only rewarding in a points score, but essential to be able to progress in the game. 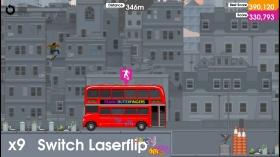 One of the concerns we had with the game jumping over to the PC was the controls. The game was built with such solid controls on the VITA that we wondered how it could be possible to translate this over to the keyboard. Somehow the developers have managed to do a decent job of it. We still recommend that you have a gamepad to play this game, but the keyboard does a decent job if it is your only option, and unlike some games, we would not shy away from playing this if we only had the keyboard option. WASD are used to basically emulate the control stick, with the arrow keys also used to perform moves, such as landing each trick. 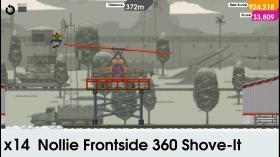 Those of you who have a gamepad, however, will find a much better experience. Like on the VITA, the thumb sticks are used in a fighting game style to perform tricks with the face buttons used to perform tasks, such as landing a trick. This is very much a game about hand eye coordination. There will be times you want to smash the controller because you mucked up a good run at the very end, but the addictive nature will have you coming back for more - even when it frustrates you to the nth degree.

For those of you who have not played the VITA version, OlliOlli is a game that is all about the flow of movement and putting tricks together. Rather than belt through levels as fast as you can, you really do need to think about each trick and each level differently. Towards the midpoint of the game, the difficulty amps up and it will take many tries through learning the course before you get that perfect run.

However, this is what is so appealing about OlliOlli. It is a game that is easily learned, but not easily mastered, and putting together a decent run is incredibly rewarding, even if it can be after a few hours of frustration. Especially due to the fact that when you make a mistake, a simple button tap has you back ready to roll again with no loading.

What makes OlliOlli somewhat unique is that there are multiple ways to complete objectives in each level. At the base level, the task is to reach the end of the track, but there are also sub-objectives in each level, such as collecting all the tokens, grinding a number of Hind helicopters or just gaining a high score. Perfecting each level is a challenge in itself and to really finish this game will take many hours of play.

And this leads us into one of the best features of the game that has been carried over, the daily challenge. Each day the game has a new map for you to try out and post a time. There is one catch to this, however. You can practice the map as many times as you wish in that twenty four hour period, but once you start the 'real' run, you only get one shot at it. It really does put the pressure on during that run and is one of the more unique and enjoyable aspects of the game. 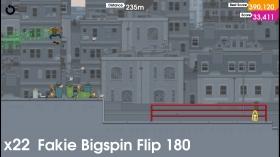 Another area of concern that we had was how the graphics would translate to the PC. It was more around the fact that the VITA has a small screen, and whilst the game did look delightful on VITA, it was a pixel art based game. However, we are happy to report that the game still looks as good as ever on PC, and the pixel art shines even more. If you want to, you can play the game windowed whilst working on other tasks. The only thing is that to succeed, you really do need to focus on controlling the character, as opposed to the graphics. 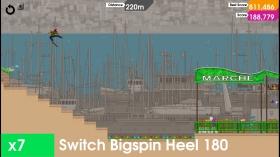 OlliOlli is a game that excelled on the Sony PS VITA, and at the time, we commented that the game was a perfect fit for the system. With the game now jumping to the PC, however, it gives even more players the chance to hop on the skateboard and we recommend that you do so. OlliOlli is a near perfect port that loses nothing of its addictive nature or sublime control system. The only thing we would say against it is that if you have a VITA, play it on there. The game still feels tighter on that system, but the PC port is very much on the same level as the original in terms of quality.