Back in June 2020, we got our first taste of 8TB of fast NVMe storage on a single M.2x2280 PCB via the one and only Sabrent Rocket Q NVMe 8TB. To this day, it's the highest capacity M.2 SSD ever brought to market. Others have indicated they have 8TB offerings, but as of yet, only Sabrent has actually produced one. Sabrent's 8TB Rocket Q is one of two PCIe Gen3 QLC based SSDs we've tested to date that performs as equal too, or even better than most Gen3 TLC SSDs on the market. Well, the all-time M.2 capacity king has re-emerged in its most powerful form ever as the Sabrent "Battleship".

So why pair Gen3 SSDs with a x16 Gen4 card? Lanes is why. 16 lanes of PCIe Gen3 can yield about 14,000 MB/s throughput, which is equivalent to four Gen3 SSDs running in RAID 0. However, x16 lanes of Gen4 can yield the equivalent of x32 lanes of PCIe Gen3 when paired with the right PEX switch. This is why the Battleship delivers roughly 10,000 MB/s higher throughput than what is possible with a Gen3 RAID card.

Now, the previously reviewed Destroyer does offer 5,000 MB/s greater throughput, because it is populated with Gen4 SSDs. However, the Battleship can hold its own with the Destroyer in many of our benchmarks thanks to some HighPoint Technologies Gen4 RAID card magic.

Like the Destroyer, the Battleship is not your typical SSD and is purpose-built for specific applications that are way outside the consumer realm. Because it is exotic in nature and will set you back around $15K, we will not be comparing the Battleship against anything as we normally do with charts. We will demonstrate how to create a HighPoint RAID 0 array and show that 23,000 MB/s eye candy we all want to see. 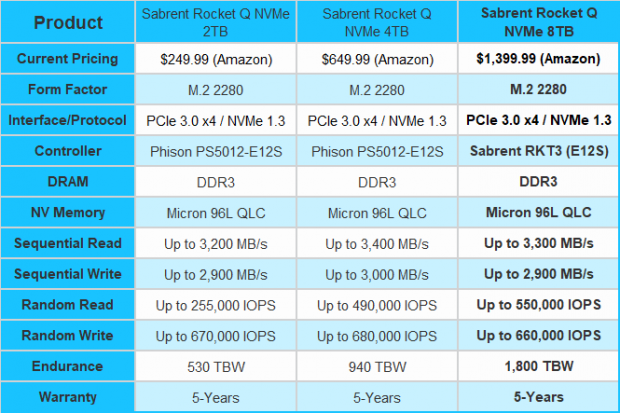 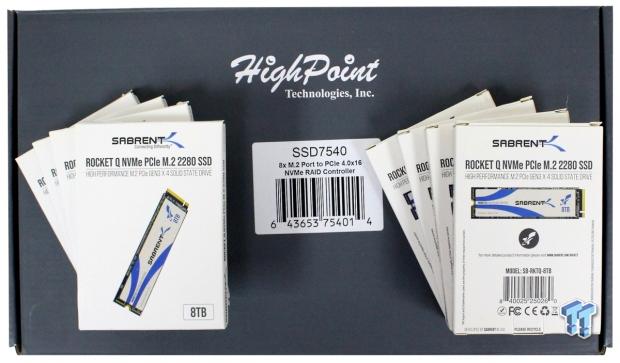 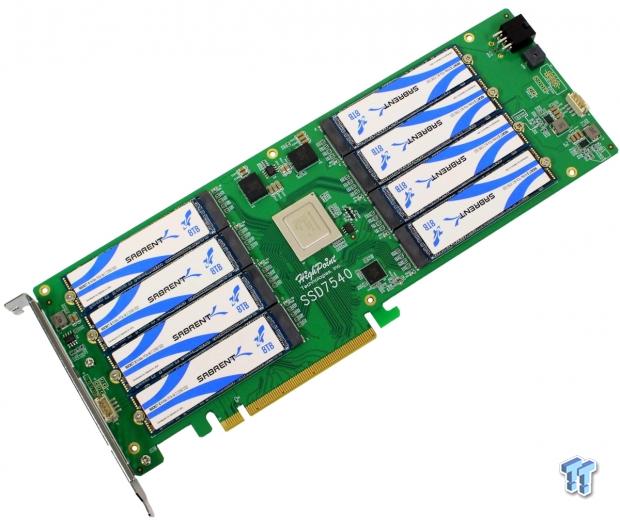 The Battleship is built on HighPoint Technologies SSD7540 x16 PCIe Gen4 RAID card featuring a Broadcom PCIe Gen4 8 series PEX switch managing eight onboard M.2 slots. The card requires additional power via a 6-pin VGA power cable. The SSDs are cooled by a heavy-duty solid aluminum heat sink with thermal pads and active cooling. This single-slot card is about the length of a high-end graphics card.

We will note that the Battleship is bootable if desired, but we don't recommend it be used as a boot volume, at least not when configured as a RAID 0 array. 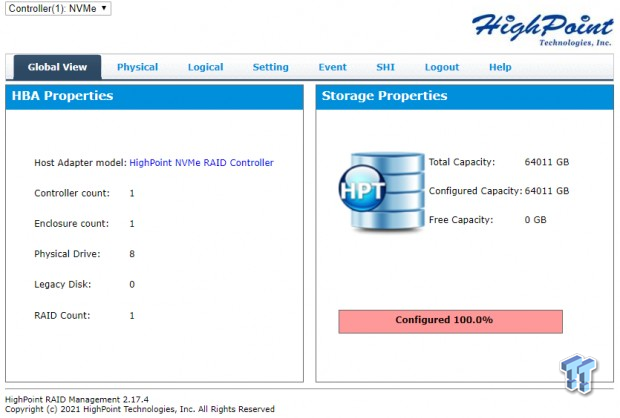 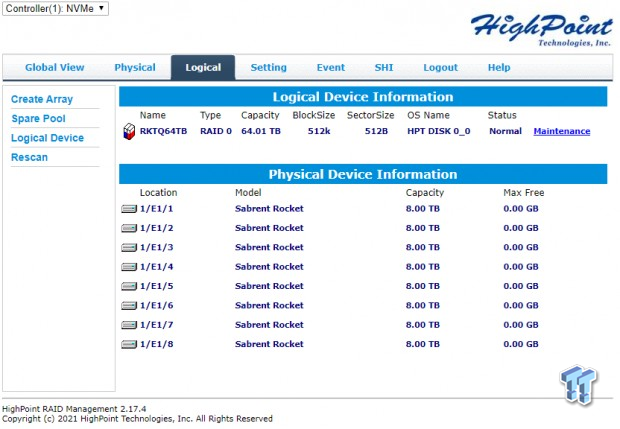 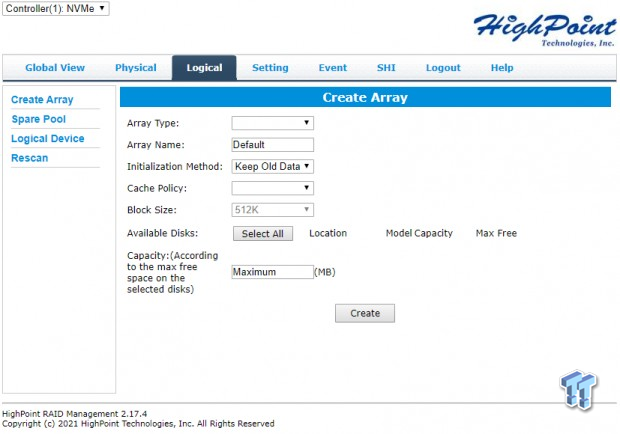 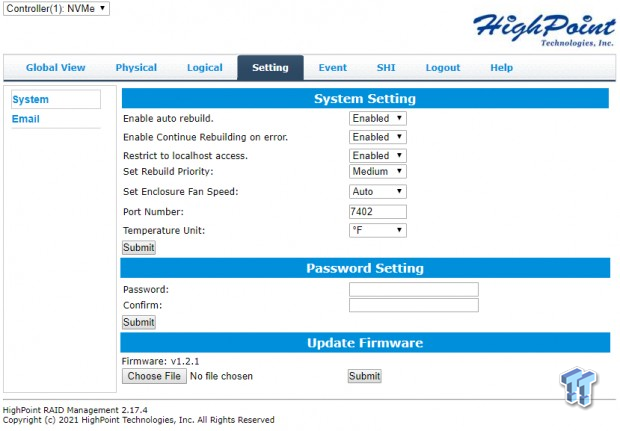 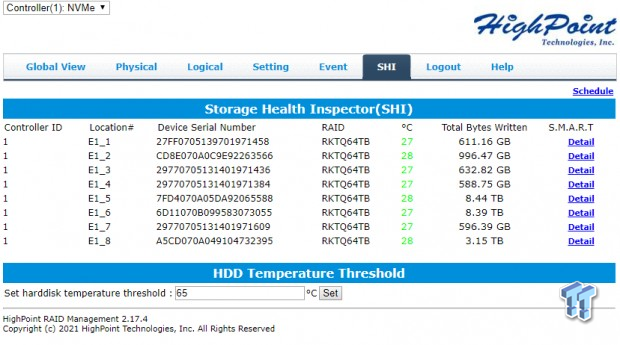 Battleship can be configured in various RAID configurations, including RAID 10. For the purposes of this review, we choose RAID 0 with the default 512K block size as this will enable peak performance. HighPoint's RAID tool is easy to use and worked flawlessly. 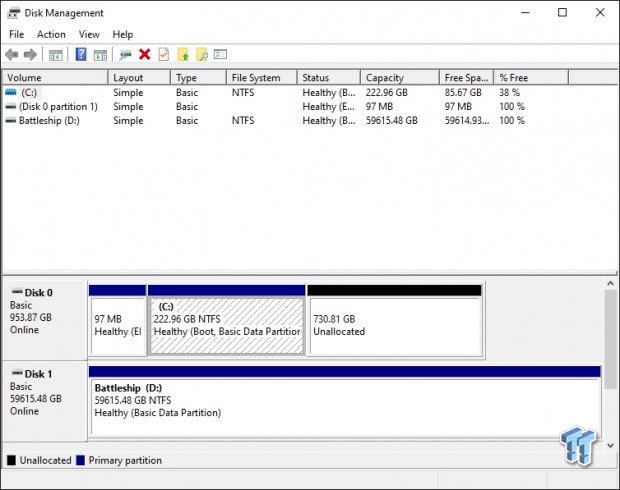 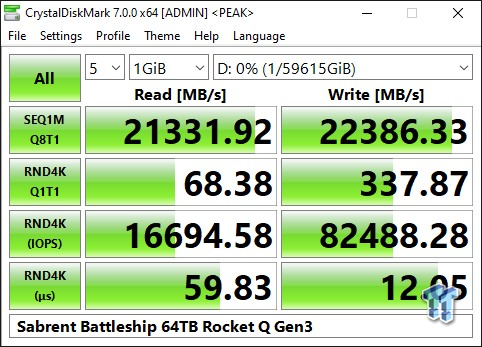 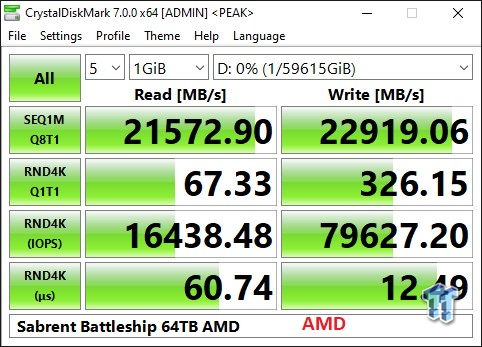 Here we can see some of that HighPoint magic in action. The Gen4 card is taking Gen3 SSDs and enabling them to punch as a group above their weight. As mentioned earlier, the HighPoint SSD 7540 RAID card enables around 10,000 MB/s higher throughput than a x16 Gen3 card can deliver. Write throughput is slightly higher than read. Throughput peaks at 22,919 MB/s sequential write delivered by our AMD system. Bear in mind you will need a PCIe Gen4 x16 slot to attain throughput like this. 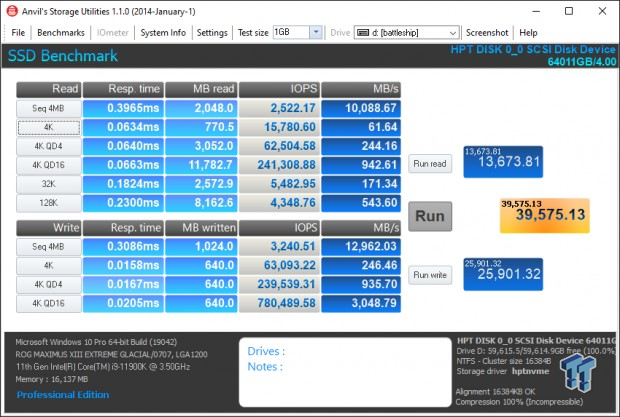 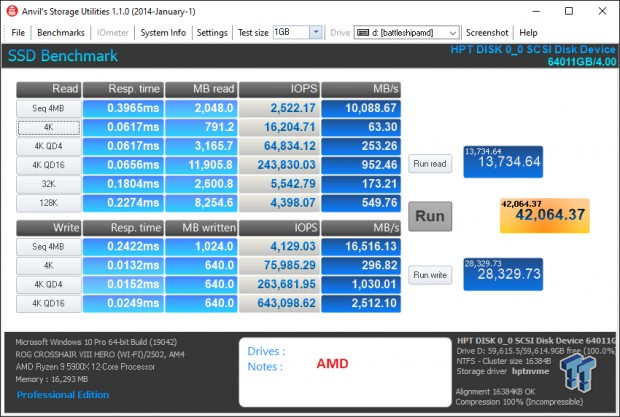 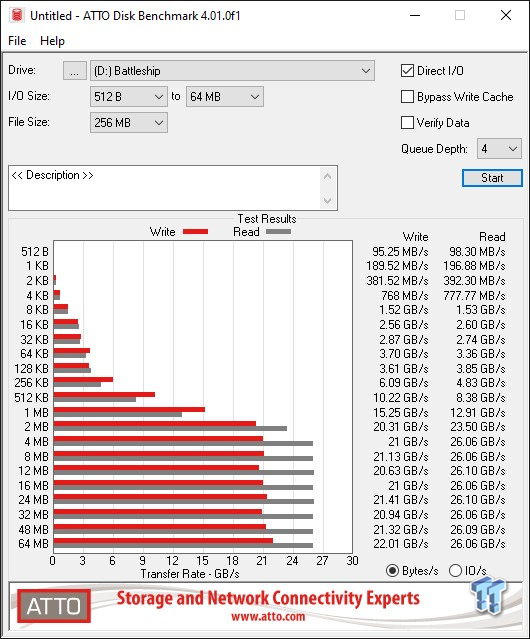 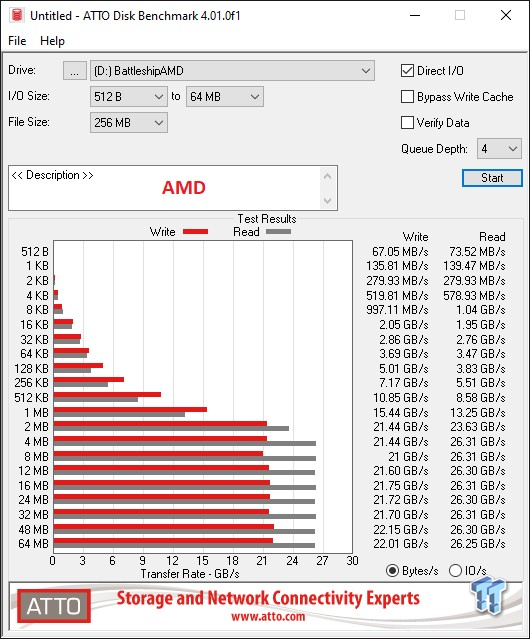 When dealing with sequential compressible data like ATTO generates, Battleship can deliver a massive 26 GB/s throughput when serving data to the host. We are essentially running at full speed at 2 MB transfers. Both platforms we are testing with can do 26 GB/s throughput with the advantage going once again to our AMD system, likely due to its higher thread count. 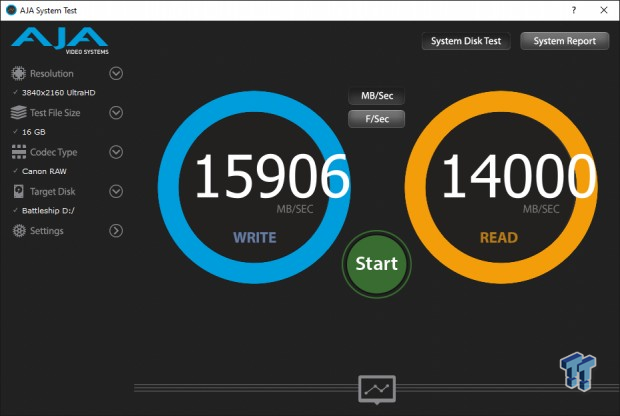 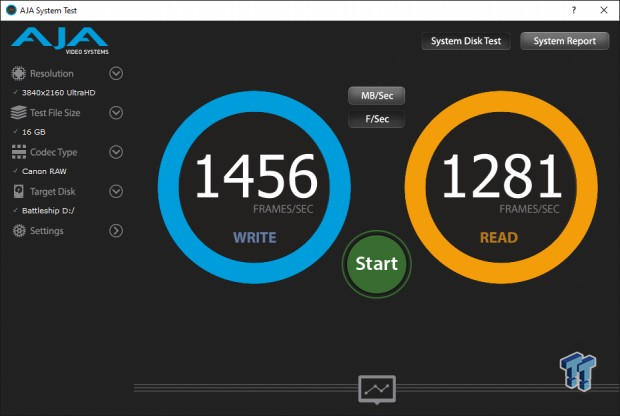 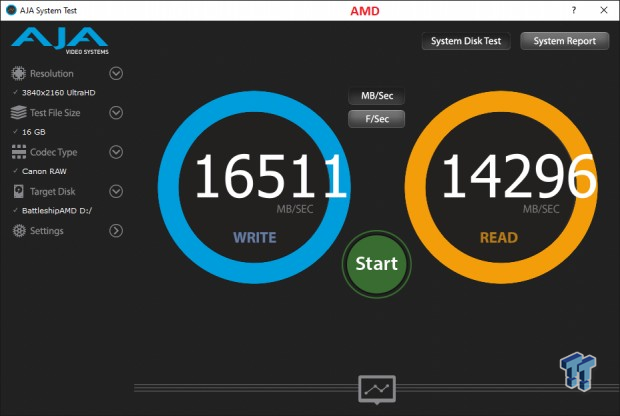 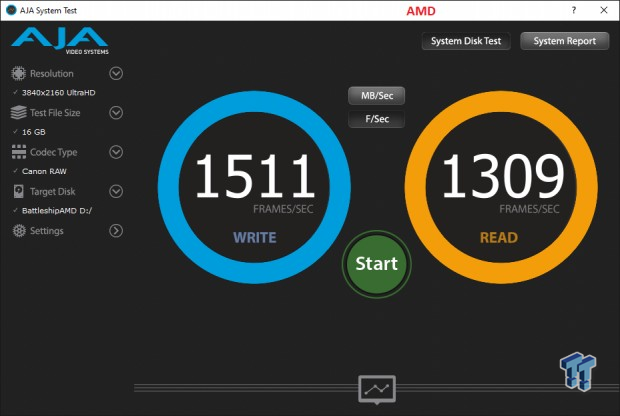 AJA disk test is an ideal benchmark to test Battleship against because it tests with video codecs of various file sizes and because it mimics certain applications Battleship will be used for. We chose Canon 4K RAW at a 16GB file size. We are showing both MB/s and FPS results. Do you need faster video processing on a vast scale? Battleship can deliver 64 terabytes of it. 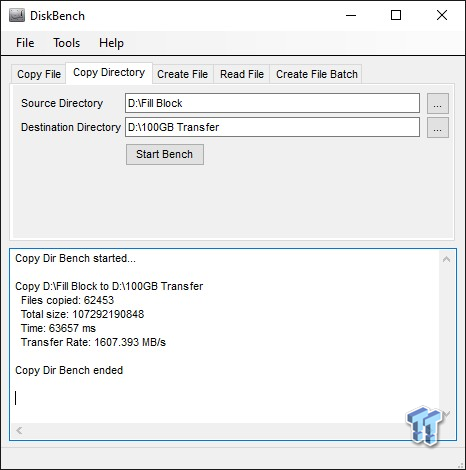 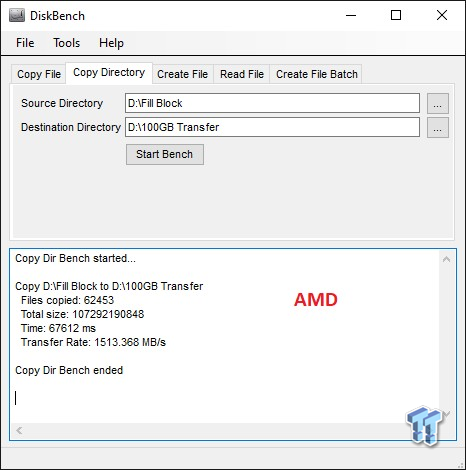 Our 100GB data block is well known for absolutely crushing the dreams of QLC based SSD's. Not so much with Battleship. Battleship handles our random in nature data transfer test surprisingly well for a QLC SSD built for sequential workloads. 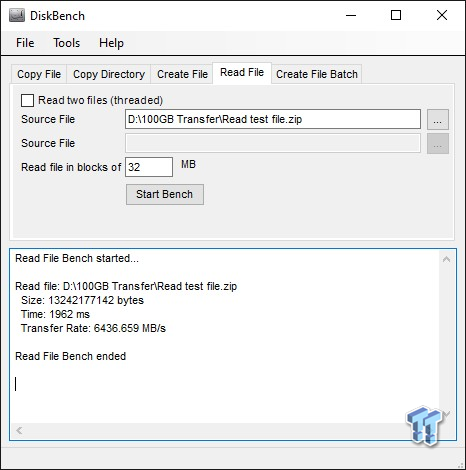 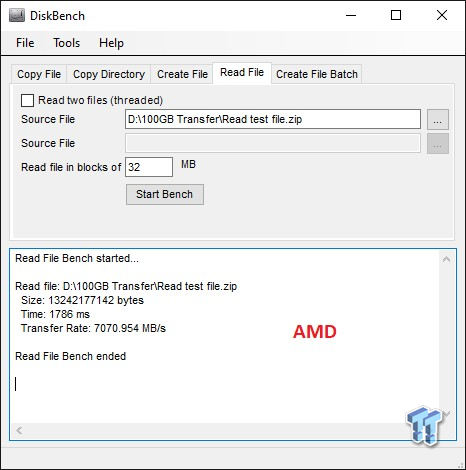 Much to our surprise, Battleship serves back our read transfer block at virtually identical record speeds as Destroyer. Amazing. 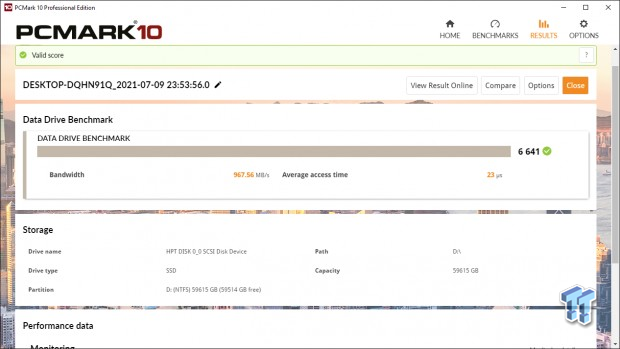 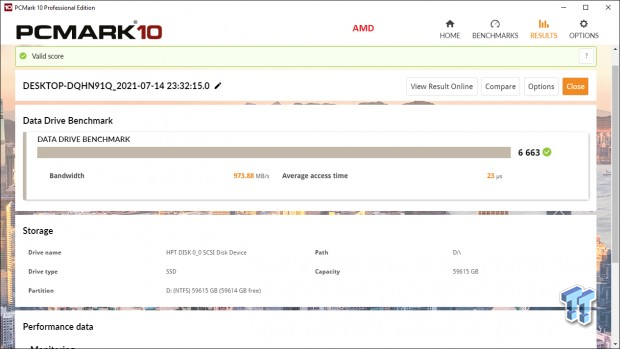 Even though this test is outside the wheelhouse of what Battleship is intended for, it does give us some insight as to how it would function as a typical consumer data drive, and that is freaking fast. This result also cements what we've observed throughout this review, and that is AMD yields slightly better overall performance than Intel. This observation is the opposite of what we saw with Destroyer, leading us to believe that higher thread count is more of a factor this time.

Battleship is a fitting name for this Sabrent/Highpoint collaboration. Overall, it's not quite as nimble as Destroyer, but at a record-smashing 64TB of capacity on a single device, it has its advantages over Destroyer. It's almost as fast too. Battleship delivered up to 26,000 MB/s throughput when tested against ATTO's compressible data and 23,000 MB/s when tested against CrystalDiskMark's incompressible data. It also matched Destroyer when serving data to the host. Amazing when you consider Battleship is composed of Gen3 SSDs and Destroyer Gen4. 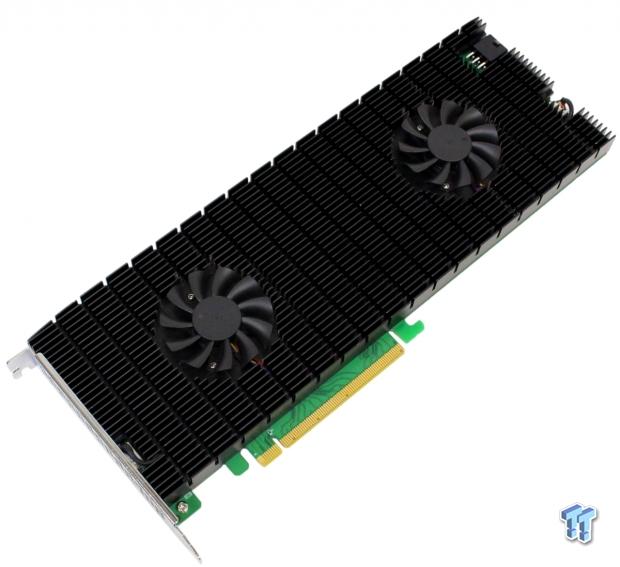