I'm a gigantic fan of NVIDIA's magic DLSS technology, where it has really grown into its own performance-enhancing beast for GeForce GPUs -- with Deep Learning Super Sampling tech powering some of the biggest and baddest games on the market. 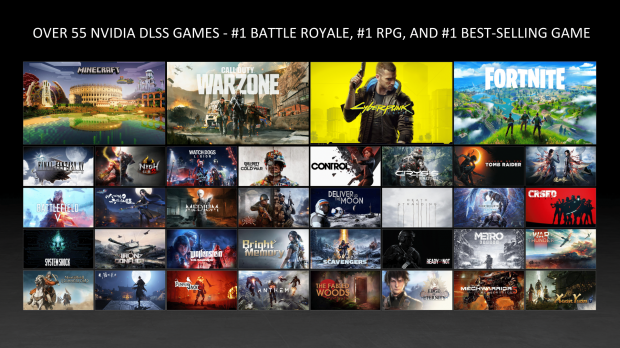 NVIDIA has its DLSS technology inside of 55+ games on the market, including the #1 battle royale game, the #1 RPG, and the #1 best-selling game. This includes Minecraft for Windows 10, Call of Duty: Warzone, Cyberpunk 2077, Fortnite, and many others. That's just over the last 6 months... while recently we've seen DLSS performance-boosting tech updates for Rainbow Six: Siege, No Man's Sky, and The Persistence.

The list you see here is just scratching the surface, but man does it look great -- Control, Watch Dogs: Legion, Call of Duty: Black Ops Cold War, Control, Crysis Remastered, Shadow of the Tomb Raider, Death Stranding -- and even System Shock, one of my favorite games of all time.

Well, it's July 2021 now -- the halfway point of the year and NVIDIA is updating everyone on its DLSS technology... on the eve of AMD's big FidelityFX Super Resolution (FSR) reveal. I've got some performance numbers there to share, with some articles dropping this week looking at 1080p, 1440p, 4K and even 8K performance under FSR on both Radeon and GeForce GPUs.

I've been testing as much DLSS content as I can, including the newly-enhanced Metro Exodus: Enhanced Edition at 8K and Call of Duty: Warzone at 8K -- which, with the help of NVIDIA's magic DLSS technology can be driven to 8K 60FPS with the GeForce RTX 3090 graphics card.

DLSS Recap: How Does DLSS Work?

How does NVIDIA achieve its magic performance-enhancing witchcraft with DLSS?

DLSS is an AI super relation algorithm that is accelerated by the Tensor Cores inside of GeForce RTX GPUs, with the super-resolution technology accurately predicting a higher resolution output (4K for example) from a lower resolution input (1080p for example). 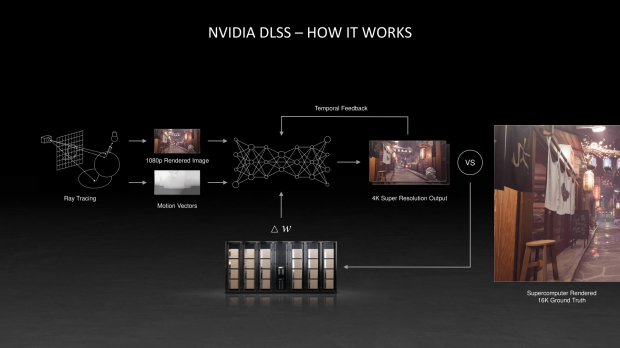 This means your GPU is rendering 1080p -- a much lower resolution, allowing the frame rate to be much higher and then taps the Tensor Cores + AI magic to magically boost the image quality out to something that looks as good -- and in some, and in most cases... DLSS looks better than native 4K.

NVIDIA explains this in 4 separate steps: 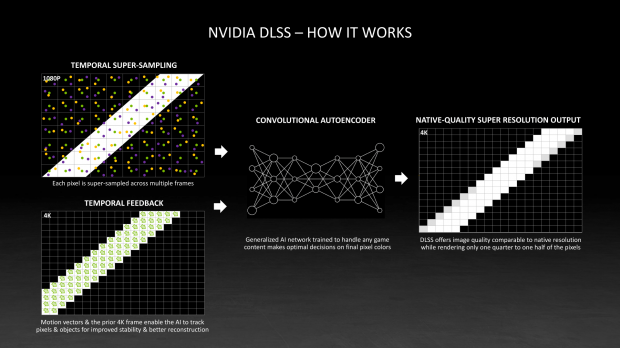 NVIDIA takes in each pixel and applies super-sampling across multiple frames, capturing as many data points as possible, and then a generalized AI network is trained to handle any game content that will make an optimal decision on final pixel colors.

You can see the green, purple and yellow dots on the top right of the image -- these are the individual passes that DLSS is making, and with each pass the image quality will improve.

In the end, we have native resolution image quality with DLSS, as well as higher performance. It's impressive stuff, and if you're playing a game with DLSS technology you would be silly to not enable it. You're going to get better graphics, and more performance... there's nothing to not love about that.

NVIDIA uses a special type of AI network called a convolutional autoencoder, which will take in the low resolution current frame, motion vectors, and the high resolution previous frame -- with that information in-hand (well, its AI "hand") it will work out on a pixel-by-pixel bases, how to create a higher resolution frame. 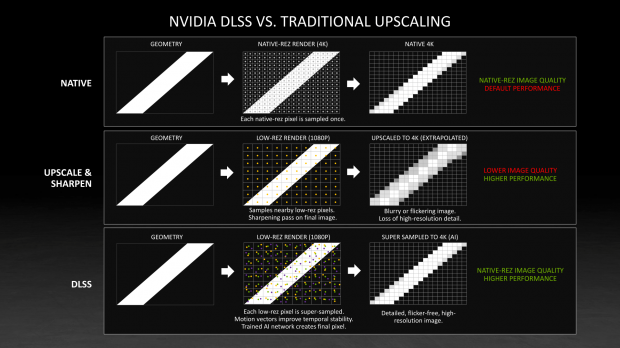 By looking at motion vectors and the previous high resolution output, DLSS is able to track objects from frame to frame, delivering stability in motion, all while reducing flickering and popping artifacts -- this is known as "temporal feedback" as it is using history to inform the future.

How cool is that? I love nerding out over this, it's awesome stuff.

NVIDIA's magical DLSS technology is "using history to inform the future" -- using previous frames, to predict future frames, and in the middle of that improving the image quality (upscaling) and the performance. It's just awesome.

With that access to prior frames and motion vectors, DLSS is then able to track each individual pixel, take in multiple samples of each pixel across frames (this is known as temporal supersampling), and then improving the detail and edge quality compared to competing upscaling technology solutions.

NVIDIA is just getting started really... as the next 6 months are going to be incredibly exciting for NVIDIA, gamers, and DLSS technology. 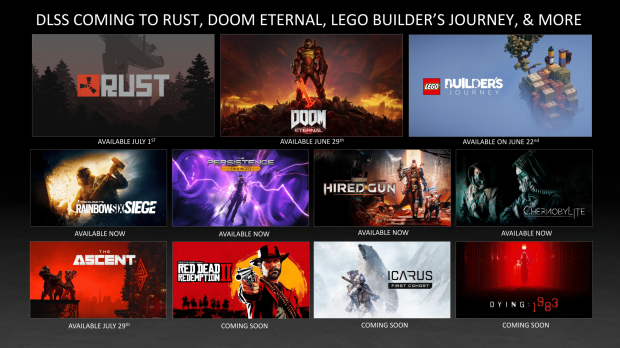 NVIDIA is today announcing that DLSS technology will be coming to the super-popular Rust on July 1, and reminding us that DLSS enters the pits of Hell on June 29 for DOOM Eternal, and LEGO: Builder's Journey on June 22.

Rainbow Six: Siege just got its DLSS upgrade patch, while Necromunda: Hired Gun, The Persistence Enhanced, and Chernobylite all have had recent DLSS upgrades. Red Dead Redemption 2 is the next big game to get a DLSS performance-enhancing update after DOOM Eternal.

I think DLSS arriving in DOOM Eternal is going to be huge, and I will be focusing a few days of performance articles on that when it drops. 4K 120FPS and 8K 60FPS (and beyond) is what I'll be looking at, especially on the higher-end GeForce RTX 3080, GeForce RTX 3080 Ti, and GeForce RTX 3090 graphics cards.

Rust is going to be another big game for NVIDIA and DLSS, as it's not as graphically demanding as other games it means gamers with lower-end cards can get some major performance improvements by enabling DLSS in Rust.

The PC version of LEGO Builder's Journey drops on June 22, and will feature ray-traced effects and NVIDIA DLSS. Mikkel Fredborg, the Tech Lead at Light Brick Studio, said: "LEGO bricks are something everyone knows and loves. Ray tracing and NVIDIA DLSS powered by GeForce RTX brings the LEGO world to life, with stunning visuals and smooth performance".

The ray-traced reflects will reflect the entire world of physically based materials in LEGO Builder's Journey, as well as its global light sources -- this includes the sun, key lights, and fill lights in and around the scene. Rough materials will have sparce reflections, while glossy surfaces will reflect every detail perfectly.

Rounded edges of bricks and spherical shapes will correctly rreflect global light as slivers of color... with the effect being quite magical. It's almost CG-like with the addition of DLSS... how did we ever live without DLSS before?! 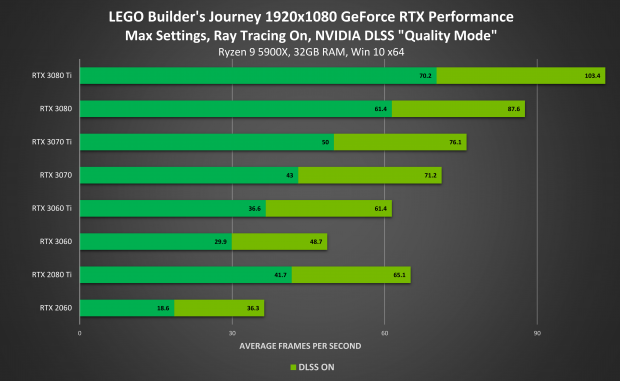 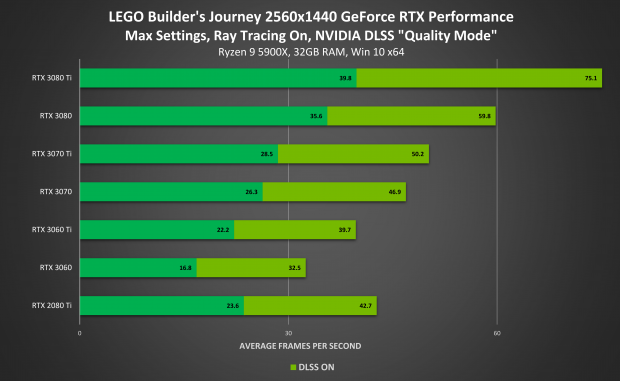 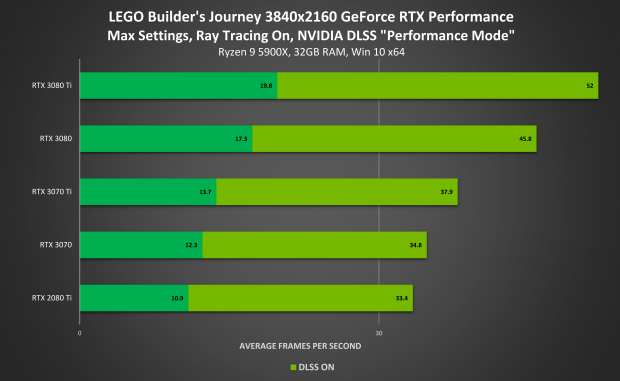 Just look at the performance gains with DLSS enabled... nearing 4K 60FPS with the new GeForce RTX 3080 Ti and everything cranked to max settings with ray tracing enabled.

NVIDIA has the support of the largest game engines in the industry, with DLSS support announced for Epic Games' unbelievably gorgeous next-gen Unreal Engine 5. 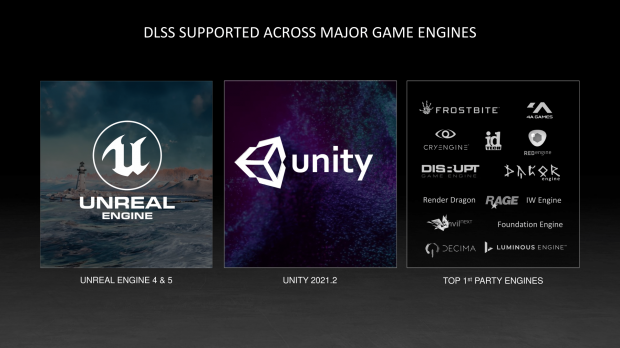 Unreal Engine 4 is already a big use case for DLSS, Unity 2021.2 coming later this year with DLSS support for GeForce gamers -- as well as the largest engines in the market. DLSS is supported by Frostbite... and during my call with NVIDIA, I was cheeky and asked if this meant DLSS was coming to Battlefield 2042 and all I could see were smiles on the video call.

Battlefield 2042 with DLSS support? I think that would be a gigantic deal later this year, for sure.

DLSS is supported by 4A Games (Metro), CRYENGINE (obvious), id Tech (DOOM Eternal), RED Engine (Cyberpunk 2077), the RAGE engine (Grand Theft Auto, Red Dead Redemption), Decima (Death Stranding) and more. DLSS has been embraced by game developers, and I think the reason is obhvious -- DLSS is dark magic and NVIDIA has spells put on them through witchcraft.

Nah, seriously -- DLSS just kicks f***ing ass and game developers would be silly not to add it to their games.

DLSS for Proton = DLSS on Linux

Another big deal for DLSS is that NVIDIA DLSS support has arrived for the Vulkan API on Linux through Proton, which allows Linux gamers to tap into the Tensor Cores inside of their GeForce RTX GPUs to super-enhance performance in DOOM Eternal, No Man's SKy, and Wolfenstein: Youngblood. 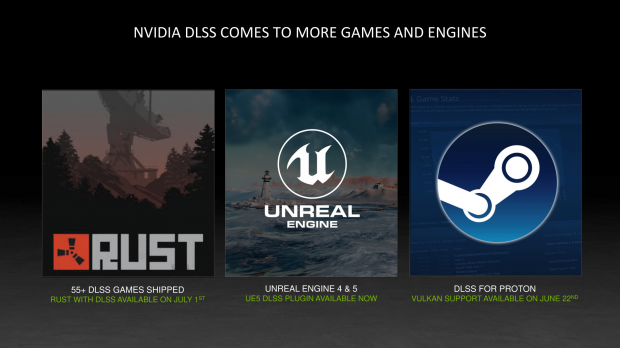 NVIDIA has said that DLSS support for DirectX titles running through Proton will arrive "this fall".

DLSS in the Future

NVIDIA has had a fantastic 6 months of 2021 so far with DLSS, but the fun is only beginning... DOOM Eternal will have DLSS upgrades on June 29, and then Rust will have its DLSS patch dropping on July 1. There's plenty more games coming with DLSS throughout 2021, and beyond.

The recent upgrades to Rainbow Six: Siege have been very welcomed, where I've spent the last few days benchmarking the game at 8K with some very surprising results. I can't wait to share those, as they are very impressive... DLSS is real change-changer in Rainbow Six: Siege.

DOOM Eternal should be pushing 8K 60FPS and even 8K 120FPS with DLSS set to Ultra Performance mode, which is going to be one of the most exciting games to play around with when DLSS arrives in DOOM Eternal in barely a week from now.

Red Dead Redemption 2 will be upgraded with DLSS support in the coming months -- another game that will be interesting to go back and re-test with DLSS enabled. I'll be testing both of these games in all resolutions: 1080p, 1440p, 4K, and the glorious 8K resolution once the DLSS upgrades drop for DOOM Eternal and Red Dead Redemption 2.

DLSS is truly kick ass... and then we'll be stepping into the world of FSR over the coming weeks, and as that matures we should see free performance for all gamers going into the future. DLSS is still a far superior upscaling technology, especially when it comes to DLSS 2.1 and DLSS 2.2-enabled games.

But what will NVIDIA do with DLSS 3.0? That's what I want to know... as I think the best is yet to come with DLSS.