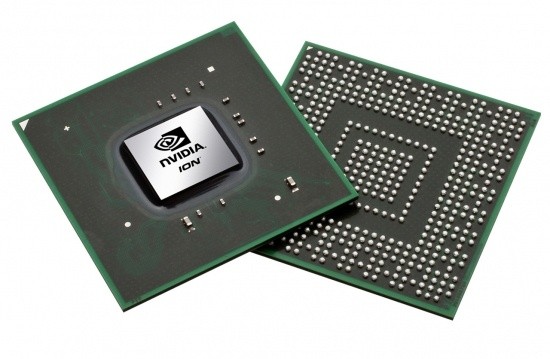 NVIDIA made many of us sit up and take notice of the hardware acceleration of HD video in netbooks and nettops back in 2009 at CES when the company showed off its first ION chip. The device took a while to come to market, but it eventually did and was welcomed by those looking for better HD video performance and graphics in small netbooks and nettops.

NVIDIA is now unveiling the successor to the original ION platform; this referred to as Next-Generation ION by NVIDIA, but often called ION 2 in the media. So far the only product to have been unveiled using the platform is the Acer Aspire One 532G. NVIDIA is betting big on the new platform and sees a huge market for netbooks moving forward, especially those that use quality graphics like ION.

Like the original platform, next-generation ION is aimed at netbook users who are media savvy, demanding things like full internet with Flash, HD video, 3D gaming and premium Windows experience. NVIDIA makes some bold claims that the new ION netbooks will offer 10x the performance and ten hours of battery life compared to other platforms.

We have already heard NVIDIA talk about its new Optimus technology that will be used on notebooks and netbooks to increase battery life by seamlessly switching between an integrated GPU and a discrete GPU without the user ever having to think about the GPU or pressing a button.

Optimus technology is very important on netbooks that will use ION along with integrated graphics. ION will also allow the user to play 3D video games like Spore, WoW and Monkey Island at impressive detail when ION is operating and sip power when ION isn't needed.

The block diagram for next-generation ION varies between desktop and netbooks, mostly based on the need for Optimus in the netbook products. Check out the slides below for more detail on the differences. 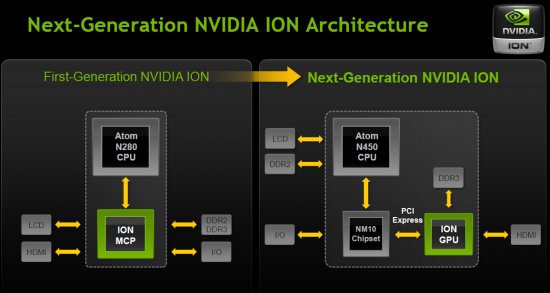 The new ION platform also allows netbooks to take advantage of all the features integrated into Windows 7 Home Premium like the Aero 3D interface, Windows Media Center, HD video codecs and personalization options, whereas machines that can only run Windows 7 Starter will have fewer of those features available.

ION will vary in specifications depending on what type of machine the platform is in. On 12-inch netbooks and desktop systems, Next-Generation ION will have 16 CUDA cores and on 10-inch netbooks, it will have eight CUDA Cores. Support for HDMI, DVI-D, VGA and DisplayPort outputs is integrated into the platform. Next-generation ION will be bundled with Atom D410, N450 and D510 processors all supporting DDR2 RAM. Both platform variants are Windows 7 certified and support hardware video decode acceleration. 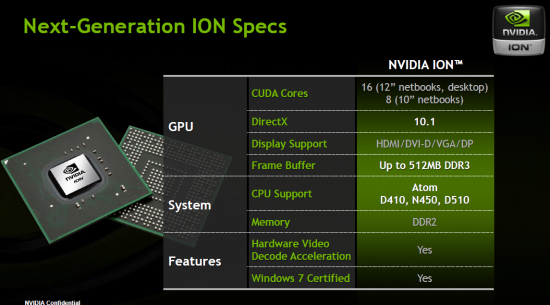 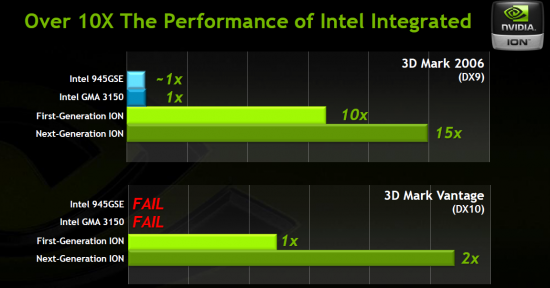 Next-generation ION will be turning up in places other than the Acer Aspire One 532G that has already debuted. We will also see the ASUS Eee 1201PN 12-inch netbook running the new ION platform. The new ION won't be limited to netbooks alone, we will also see ION in nettops, all-in-one machines and integrated into mainboards and GPUs. That last bit means that we will see discrete video cards with next-generation ION GPUs onboard. 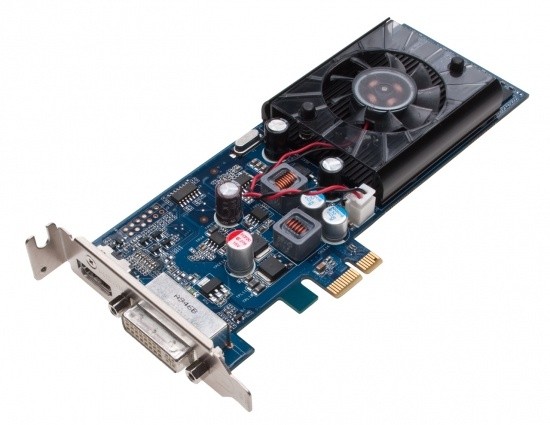