Today we take a look at Microsoft's Azure AI for mobile computing. The issue with gaming notebooks is their size and weight constraints, and while people want to be able to play their beloved games on the go, battery life and cooling capacity can greatly impact performance. People want lightweight notebooks with long battery life, so you can actually play games on your plane ride or during class, but those notebooks that might last over a few hours and also play those games are heavy, thick, and often very loud.

To take a swing at this dilemma, Microsoft teamed up with notebook vendors like GIGABYTE to take tackle this problem using artificial intelligence to maximize resources for certain things while reducing resources to parts of the system not in use. For example, let's take a game that only utilizes about 50% of your CPU, 100% of your GPU, and loads itself mostly into DRAM. The AI could decrease CPU power limits, increase GPU power limits, and decrease storage power limits. It could also optimize fan speeds and increase GPU fan speed while decreasing CPU fan speed, decrease WIFI or turn it off, and set up your keyboard to backlighting is only provided to keys that are used in the game. It could also optimize your audio settings.

While you can do a lot of this manually, the AI is designed to do it on-the-fly so you don't need to open dozens of menus to change things like your power plan. Microsoft's Azure AI on the Aero 15-Y9 we reviewed a while back actually does these things. For instance, in GTA:V the keyboard would light different keys in different colors, fan speeds would pre-emptively ramp up, and we saw actual gains with performance in the game. There are three different settings with Microsoft's Azure AI; Gaming+ & Professional+ (Green, Edge), Gaming+ & Professional+ (Red, Cloud), and AI disabled. For those of you who might not know the difference between the edge and the cloud, cloud will use resources from Microsoft's servers which are constantly updated while edge uses an embedded database on the machine, so it will need to be periodically updated. As time progresses and more user information is gathered and analyzed, the Azure AI will become better at optimizing performance.

Now, some of you might be thinking about your privacy, and there are privacy concerns with sending so much information to Microsoft, although Windows 10 already sends Microsoft a lot of telemetry information and it gathers a lot of data, this program sends more. Naturally, there is a GDPR waiver to protect GIGABAYTE. GIGABYTE did some internal testing with the AI on and off, and they reported double digit percentage gains in a few game titles such as Assassin's Creed Odyssey and single digit gains in productivity applications like Adobe Premier. 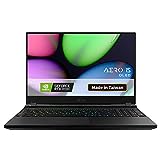