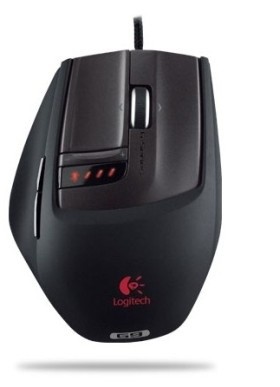 It seems like this is the year of the gaming mouse, with new products from Logitech, Microsoft, Razer and SteelSeries. The first one to get us a sample to have a play with was Logitech with its new G9 mouse. Even from the word go people thought it looked odd and we can't disagree that we had our doubts about this new design, since the previous design has been around for a good few years now, even though it has received a few tweaks along the road.

The most unique aspect with the G9 is the fact that the shape of the mouse can be changed, something no other mouse has ever offered. The interchangeable grips are an excellent idea and the mouse ships with two different grips so hopefully Logitech will follow through and release more grips for it in the future. 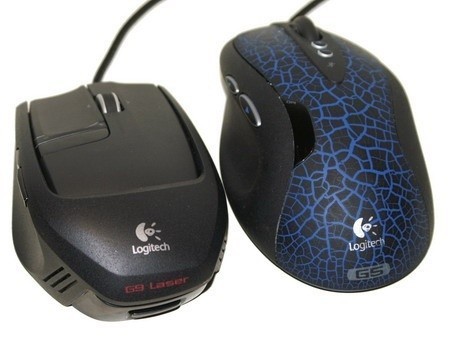 The two different styles supplied in the box consist of a smaller grip with a similar texture to the G5, a sort of rough sandpaper style surface. Logitech calls this the Precision grip as it's also smaller than the second one which is known as the Wide Load grip. The Wide Load is as the name suggests much wider, it has a more pronounced thumb grip and it has a higher, longer and larger palm surface.

The texture of the Wide Load grip is a velvety soft rubber finish and it has an extra glide surface due to the bigger thumb rest. Both grips have two thumb buttons, but they seem to be located a little bit too high up on the mouse, more so on the Wide Load grip than the Precision grip. Removing the grip reveals a fairly small mouse and it's still fully functional and might suite someone with very small hands. The side buttons are actually located here and the buttons on the grips push onto the buttons on the mouse. 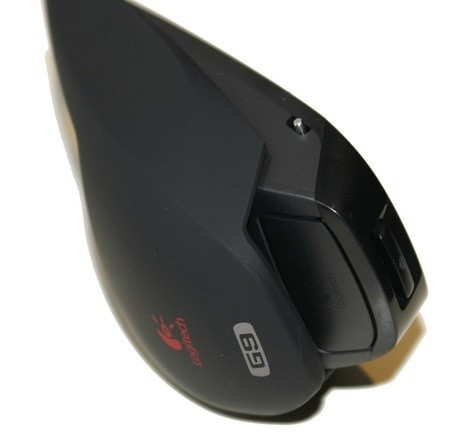 The grips are attached to the front of the mouse and locked in place by two metal bars at the rear. You release the grips simply by pressing the large button at the lower rear part of the mouse and then by simply lifting them forward. It's also here were you'll find the weight compartment and this has been completely redesigned from the G5. The cartridge is released by pushing it inwards and it now only takes four weights.

The new weights are sort of square in shape and come in 4 and 7g weights. It means that you can load more weight in total than the G5, but you don't have the same kind of fine tuning. It's easier to insert and remove the weights into the cartridge this time around, as the new weights don't have the rubber grommets like the ones with the G5. 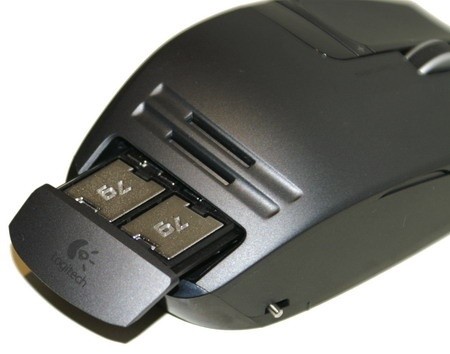 The weights are stored in a similar looking metal box as the one that came with the G5, but it does of course say G9 on it instead and it's been made to fit the new weights. We have to say that Logitech missed a trick here that Microsoft picked up with its new Sidewinder mouse and that's the ability to use the cartridge case to keep the mouse cord in place.

The scroll wheel for the G9 is taken straight from the VX Revolution. Why the VX and not the MX you might wonder? Well, it's simply because the MX uses an auto switching wheel while on the VX you have to manually switch between the modes. The G9 has a button for this on the bottom, just like the VX Revolution and it's not exactly what we'd call clever. Having to flip the mouse over all the time gets kind of annoying. 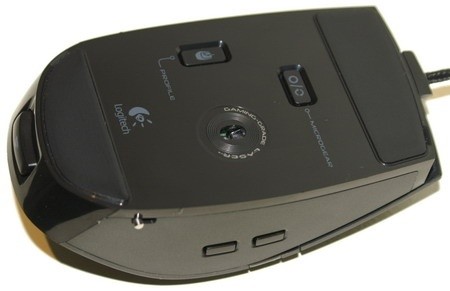 None the less, the MicroGear scroll wheel is a great addition for those that want to use their mouse for more than just games. However, we have a couple of minor complaints. The wheel itself isn't the same as for the Revolution mice, it's either made from aluminium or plastic instead of that nice heavy solid metal feel that you have in the Revolution series. For some reason Logitech also made it a lot smaller and we can't quite figure out why this is the case.

Otherwise it feels much better than the older scroll wheels, although it's quite stiff to press down and for anyone that's used to using the scroll wheel as a reloading button in games, they might want to use a different button on the mouse for this. The two main buttons are quite long and sort of half pipe shaped, which is also quite different from the G5 series which had quite flat buttons. 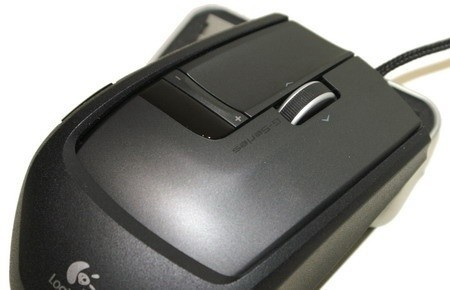 They are actually quite comfortable to use, even for longer periods of gaming and they work well with the design of the grips. Some people have complained about the location of the dpi adjustment switch, which is just above the left mouse button. However, it's actually quite easy to use once you figure out that you can press it with the rear part of the top of your finger by moving it back just slightly. It's hard to explain exactly how to do this, but once you get to hold a G9 you'll know what we mean.

The last button on the mouse is found at the bottom again and it's for selecting one of the three profiles you can store onboard the mouse. You press the button and then use the dpi setting button to select the profile you want to use.

The Logitech G9 is the first mouse that you can buy with a 3,200 dpi sensor and it's insanely sensitive at this setting. Luckily you can decide on what dpi setting you want to use from 200 all the way to 3,200 and as with the G5, five different dpi settings can be pre-defined.

The G9 has the advantage of having some built in memory in which you can store the dpi settings and even better, you can store up to five different profiles. This means that you can take the mouse with you or use with your notebook for example, without having to install the software, but still retaining you custom settings.

The new SetPoint version from Logitech is also quite different and it has been improved in many ways. It's now easier to change a lot of the settings and it has a wider range of options that you can control and adjust. The downside is that for now it only works with the G9 mouse. 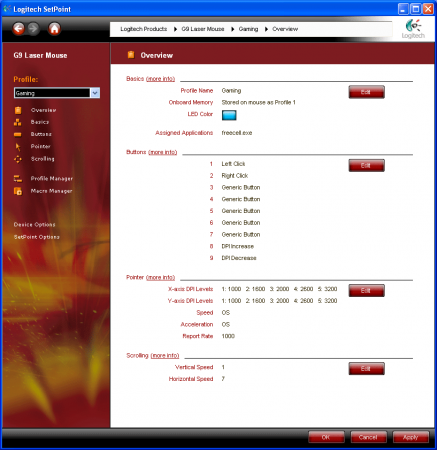 As you can see from the screenshot, you have the ability to change the LED colour on the dpi setting display on the mouse and you have a pretty good selection of different colours to choose from. This makes it easier to distinguish between different profiles. Another new feature is that you can program Macro's into the G9 and it's not limited to mouse commands. This might be considered unfair play by some, as you could gain an advantage in some games where certain key presses will initiate say for example a spell.

There's very little here that we don't like and it looks like Logitech is going from strength to strength with each of its new gaming products and this time the new software works like a charm from the word go as well. But what you're probably wondering is how good it is in actual game play. 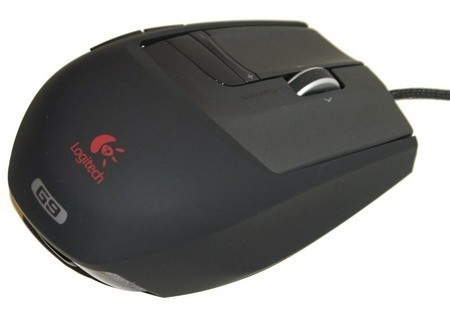 Well, we gave it a good hammering in Battlefield 2, Command & Conquer 3: Tiberium Wars and Team Fortress 2. The smaller Precision grip was definitely the better one in FPS games and we found the G9 to be very fast and accurate. Almost too fast at times and we didn't really use at more than 2000 dpi, however, the Wide Load grip was far more comfortable to use in C&C3 and we even used the 3,200 dpi setting.

The overall feel of the G9 is great and it's even good as a day to day mouse and the MicroGear scroll wheel is great when you're browsing long web pages. It's impossible to use in frictionless mode in games though, but we doubt that Logitech ever intended for this. 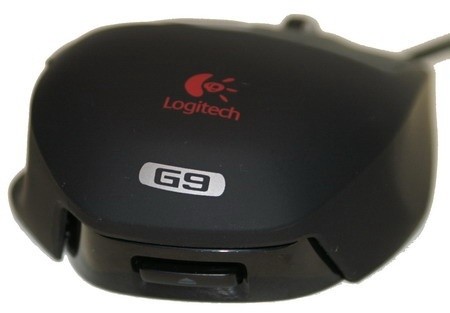 Well admit that the shape still feels a bit odd, even after several days of playing games with it and although it feels better for FPS games due to its smaller size which really seems to make it easier to move it around. It all depends on how you're holding your mouse of course, but if you grab the sides of it with your thumb and pinky, then we're pretty sure you'll like the G9 for FPS games.

The Wide Load grip could actually have been bigger, to the extent of the MX Revolution, since when you play strategy games, you hold the mouse differently and it's nice to be able to rest your hand comfortably on the mouse. Here's hoping for some new grips from Logitech.

Well, what can we say to sum up the G9? It's currently one of the highest DPI mice you can buy, at least until Razer brings out the Lachesis which offers an insane 4000 DPI. The interchangeable grips are a great idea and it's quite odd that no-one has come up with this before as it allows the mouse to function quite differently which makes it more suitable as an all-round mouse. 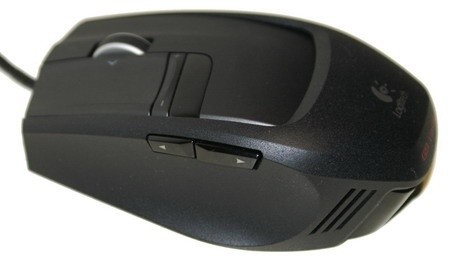 The new scroll wheel is good, but not as good as the one on the MX and VX Revolution, as we found it to be a little bit too small for our liking, as even though it's wider than the wheel on the G5, it sits lower in the mouse. It's also stiffer to click, but we like the ribbed surface. 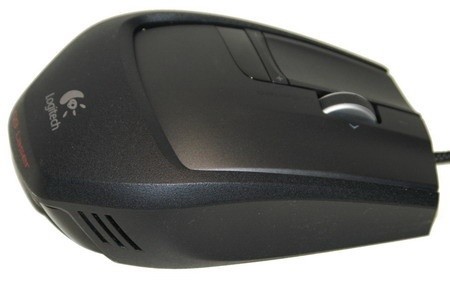 It's suitable for just about any kind of game play and you don't need any special kind of surface to make the most out of it. The ability to store different profiles in the G9 is also great and it makes it a great choice for those that bring their own mouse to internet cafes for a spot of gaming. 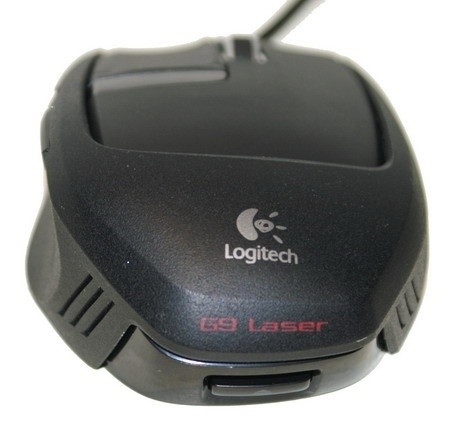 There's really not much bad we can say about the G9, we just hope that Logitech will release more grips for and that they keep develop and support the new software for it. However, there is one downside and that's the price, as at US$99.99 this is a very expensive mouse and no-one can argue with that.

This doesn't mean that it's bad value for money, as it's a first rate product, but with the second generation G5 at $69.99, it seems a tad much.

In the end we can't do much else than recommend the G9, as it's yet another excellent product from Logitech, but it will be up against some stiff competition once Razer, Microsoft and SteelSeries launch their new gaming mice. 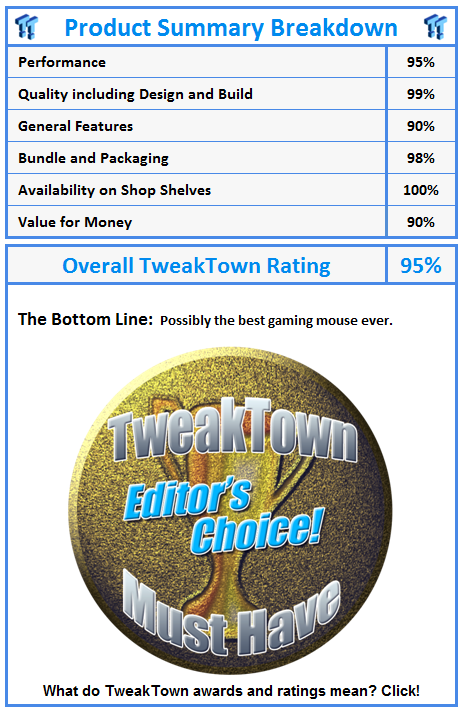