The HyperX Quadcast S is a condenser microphone marketed as a full-featured standalone microphone for streamers, content creators, and gamers. Its aesthetic is likely to appeal to all of those audiences. 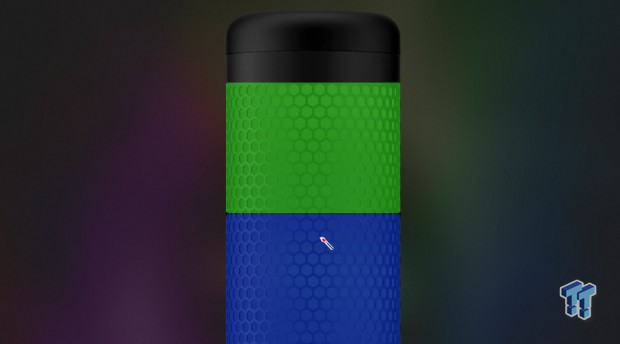 The mount attached to the stand and surrounding the microphone is made of plastic and silver elastic rope, and serves as an anti-vibration shock mount to help reduce unwanted noises being detected by the microphone. The underside of the stand also has a rubber ring to grip one's desk and stop scratching. On the back of the microphone just above the mount is a dial to select which of the four available polar patterns the microphone is using to detect audio. Below the mount is the I/O comprising a 3.5mm headphone jack and a USB-C port. 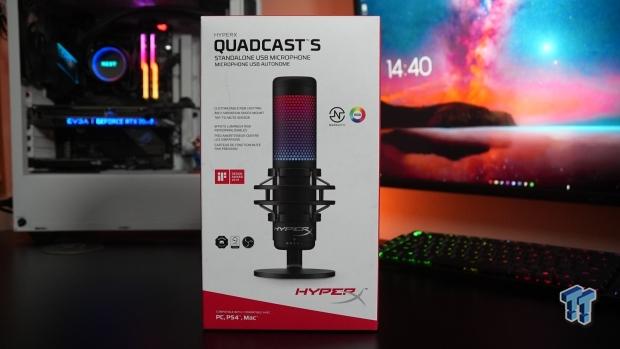 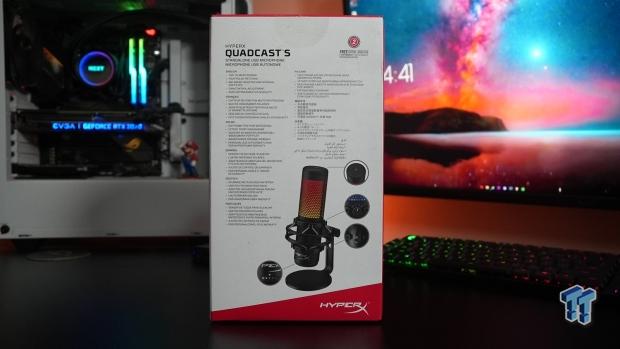 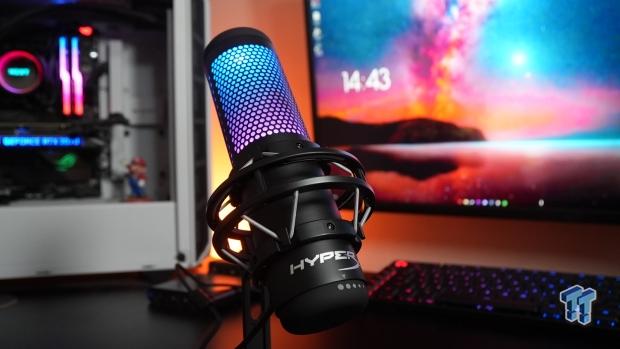 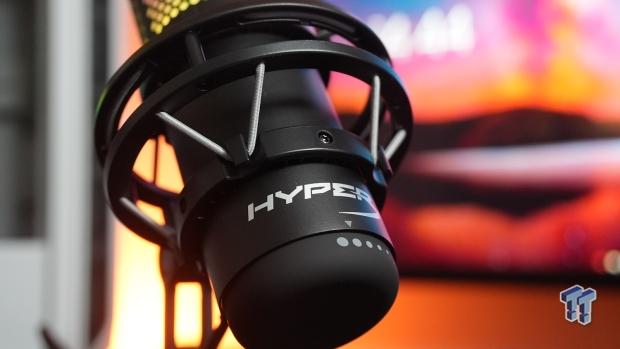 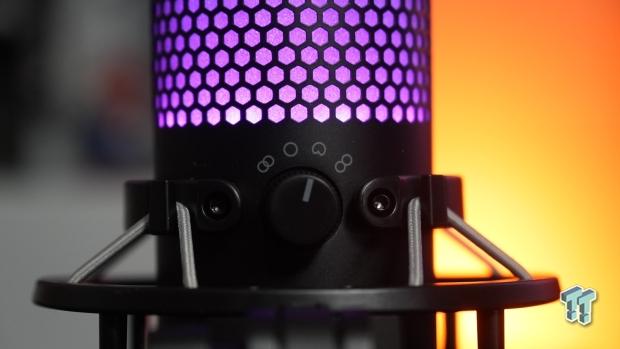 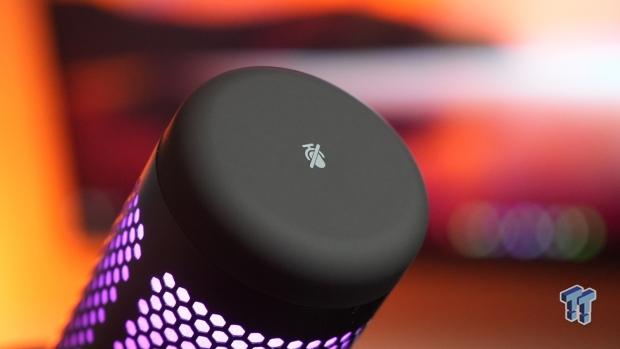 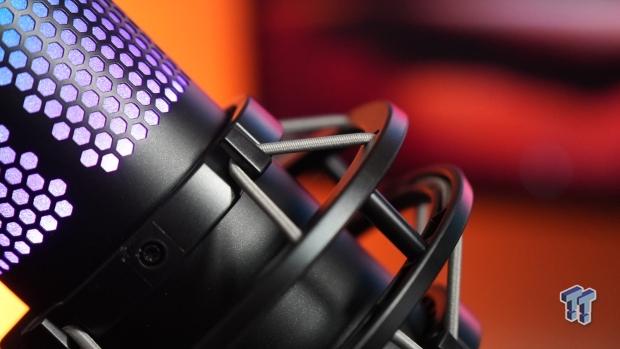 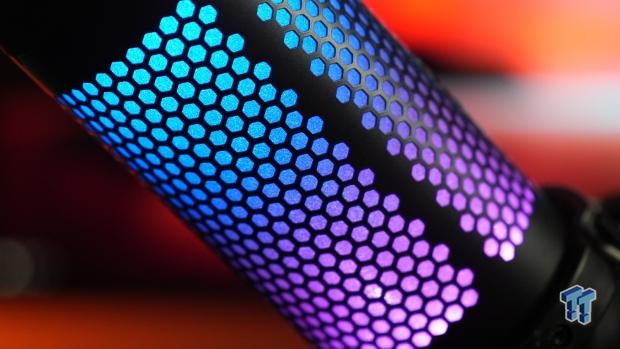 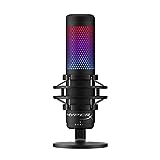 Included in the box is a braided fabric USB-C cable, a quick-start guide, welcome and support information cards, the microphone itself (pre-assembled with mount and stand), and a mounting adapter compatible with 5/8" and 3/8" threads. The anti-vibration shock mount is attached to the body of the microphone with Torx screws to deter tampering, although ideally, its removal shouldn't be necessary or desirable.

The microphone and mount can be detached as one from the stand by loosening the large plastic-headed thumb screw at the back, then attached to a third-party stand/arm of one's choice. The thumbscrew can also be adjusted to position the microphone at various angles from upright to tilted back approximately 45 degrees. The Quadcast S is supported across PC, PS5, PS4, and Mac platforms and comes with Discord and TeamSpeak certifications for peace of mind regarding compatibility and quality.

Complementing the Quadcast S is HyperX's NGENUITY software, which is in beta at the time of writing this. The program is a hub for adjusting settings and features of the Quadcast S and other compatible HyperX hardware such as mice, keyboards, headsets, RAM, and their RGB mouse pad, allowing synchronized lighting effects system-wide. 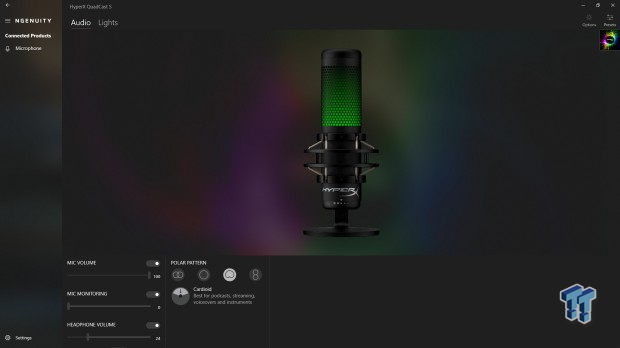 For the Quadcast S, the Options button control's overall brightness of the RGB lights, and houses the setting for choosing whether lights signify the microphone is live or muted. Next to Options is Presets, which allows the creation of, or importing, and exporting of multiple settings profiles. For the Quadcast S, this only affects lighting and not any of the audio settings. Each profile can be linked to any game or program on your system, and when they are run, NGENUITY will change from whatever settings it is currently on to the profile associated with that program, displaying the lighting effects that are saved in that profile. 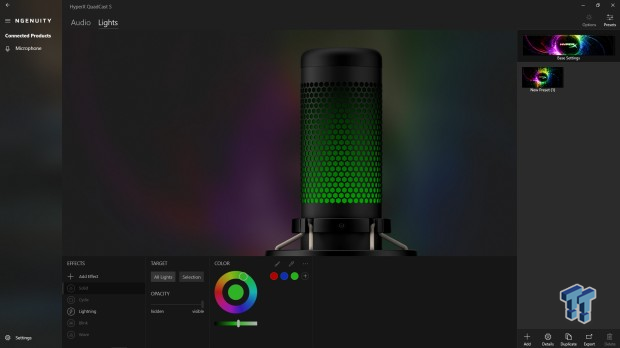 Switching between programs associated with different presets will change the presets back and forth, but they will not revert to a base setting when switching to the desktop or any program for which a preset is not defined. 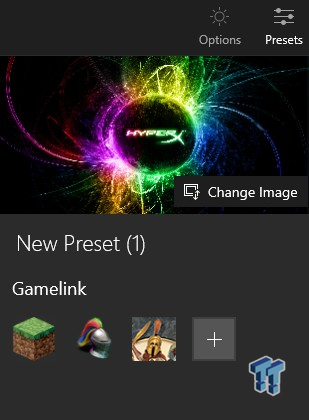 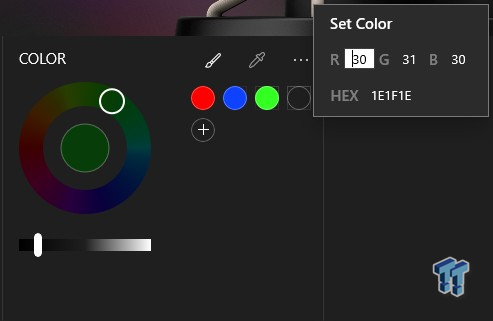 Microphone monitoring plays what the microphone hears back to the user but will only do so through the device connected to the 3.5mm jack on the microphone. This prevents having to adjust the setting if changing from headphones connected to the Quadcast S to your computer's speakers, which you won't need to hear your voice from. Headphone volume adjusts the volume of the microphone as an output device in Windows, and changes in one are reflected in the other, instead of being two independent sliders to manage in app and on a system level.

Polar pattern options are also displayed in the Audio tab, with the current mode highlighted. However, these are only adjustable via the dial on the back of the microphone itself and not through the NGENUITY software. When selected, each pattern has a diagram to represent where the microphone is detecting audio from, and a short description suggesting the ideal use-case, as described above. 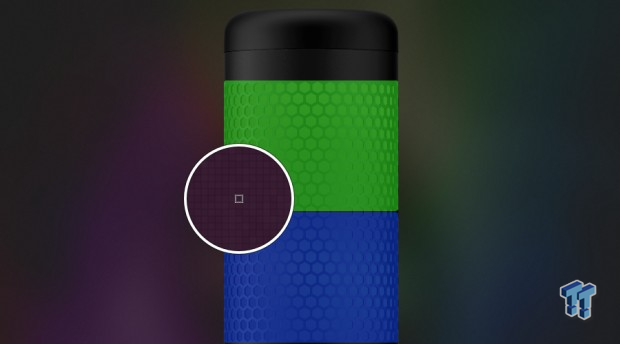 Under the Lights header in NGENUITY, a large render of the Quadcast S' top half is shown with the current lighting showing. At the bottom of this page are controls for the lighting effects, which includes Solid, Blink, Cycle, Lightning, and Wave. The Quadcast S has two individually addressable lighting zones, one for the top half and one for the bottom half. Thus, every effect has a Target setting for All Lights or Selection, allowing effects to be displayed in both zones or only the selected one, which can be chosen by moving the mouse over the desired zone on the render. This means effects can be mixed and matched top and bottom to your heart's content, or a zone can be disabled for a top-down/bottom-up lighting effect.

Creating lighting effects adds them to a list from where they can be deleted and enabled/disabled, so you can have multiple customized effects readily accessible. The list can be rearranged, with the topmost enabled effect being displayed before others. Only one effect will be active at a time if it addresses both lighting zones, but if the prioritized effect addresses only one lighting zone, then the next enabled effect will address the other.

However, every effect also has an opacity setting and reducing it will allow other active effects to be visible. This allows effects to be layered, mixing their colors and enabling multiple non-static effects to be shown at once. Though in practice, they become hard to distinguish with more than two.

The Solid effect displays any static color, while Blink displays a static color and then turns off the lights if no other effects are active until it blinks back on or shows an effect from another layer. Cycle smoothly transitions the selected zones between colours, and Wave functions similarly. However, it brings the next color from the top down across zones, similar to a scrolling effect, always displaying a different color per zone. If only one zone is selected, Wave will behave identically to Cycle.

Lightning brightly pulses a static color which then fades out slowly, emanating from the top or bottom for those respective zones, and similarly to Wave, it will do this from the top down if selected for both zones. Similar to the Blink effect, as the color fades out before the next pulse, other lighting effects will be visible from the subsequent layers. Every effect but Solid has a speed setting to control the pace of lighting changes, and Blink additionally has a delay length setting to control how long the light stays off between pulses.

Solid, Blink, and Lightning allow color selections from a color wheel with a brightness slider, and have a paintbrush tool to choose which zone a given color is applied to. Colors can also be chosen by inputting hex codes, or values from 0 to 255 for red, green, or blue individually (this also displays the hex code for the resultant color). An eyedropper tool is available to select any pixel on your screen and display its color, with a magnifying effect being applied around the cursor to make selection easier. Blink and Lightning also have the option to randomize colors with every blink/pulse.

Cycle and Wave both allow color selection from a spectrum ranging between two user-defined colors, with the ability to add eight more points on the spectrum and change the colors at these points. The color of the light will then seamlessly transition between the colors of each designated point for up to ten colors and then repeat.

Any color can be saved alongside the color picker for quick access for Solid, Blink, and Lightning using the + icon, and for Cycle and Wave, a + is also present, which adds another rainbow icon alongside the already present one, indicating another spectrum that should be able to be switched to. However, when editing the colors of a spectrum, they do not save, and selecting a different icon or reselecting the one being worked on will revert the spectrum to default. Therefore, for these two effects, the + icon serves no purpose and seems to be an oversight/bug in this feature, though this is understandable given the software is in beta.

The Quadcast S' support for different polar patterns changes where the microphone detects audio from in 360 degree space. The stereo pattern hears all but a small cone directly behind the microphone, the suggested use-case for which is recording vocals and instruments. The omnidirectional pattern picks up audio in all directions with no deaf spots, and is recommended for multi-person podcasts or conference calls.

The cardioid pattern captures audio coming from in front of the microphone, cutting out what's behind or to the sides, and is best used for streaming, voiceovers, and recording podcasts, vocals or instruments singularly. The final polar pattern is bidirectional, which detects audio in front of and behind the microphone while ignoring audio coming in from the sides, with an ideal scenario for this setting being a face-to-face interview.

These polar patterns are adjustable with a dial on the back of the microphone, with four symbols to indicate which mode is selected. These symbols are illustrated in the quick start guide and on the side of the box, and the respective symbol for the selected pattern is displayed in HyperX's NGENUITY software.

The HyperX Quadcast S is a performant and feature-packed microphone, with a highly customizable aesthetic thanks to its RGB lighting. Plug and play make streaming, communicating with friends. At the same time, gaming or conference calls are easy, and adjustable polar patterns make it usable in many other recording scenarios, preparing the user for any use case for a long time to come.

Also available for purchase is the HyperX Quadcast, which boasts the same technical specifications, but lacks RGB lighting, opting instead for red, and changes the elastic of the anti-vibration shock mount to match. It also uses micro-USB instead of USB-C but affords a more cost-effective option to those less interested in customizable lighting, getting this solid microphone into more hands.

With plenty of features, and a highly customizable aesthetic with gorgeous RGB lighting, the HyperX Quadcast S is a fantastic option for streamers and gamers and should definitely be considered a viable recording solution.