The ROCCAT Torch is a studio-grade USB microphone equipped with dual condenser capsules behind an integrated pop filter that can record 24-bit audio at up to a 48 kHz sample rate, with an MSRP of $149.95. 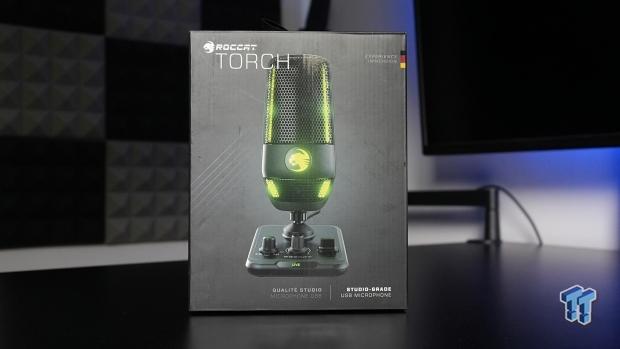 The microphone module has a black, all-metal construction (apart from the ROCCAT logo in the center, which is plastic) and screws into a ball joint on the anti-vibration mixer base that also hosts "mixer-style" controls for turning the microphone on and off, selecting polar patterns, adjusting gain, and headphone volume.

The top of the base has a black, brushed metal surface, with plastic rounding out the rest of the construction. The microphone module can be rotated freely and tilted between fully upright and about 30 degrees back. It can also be unscrewed from the base and paired with third-party boom arms. When turned on, the ROCCAT logo and two LED strips climbing the left and right sides on the inside of the microphone light up. 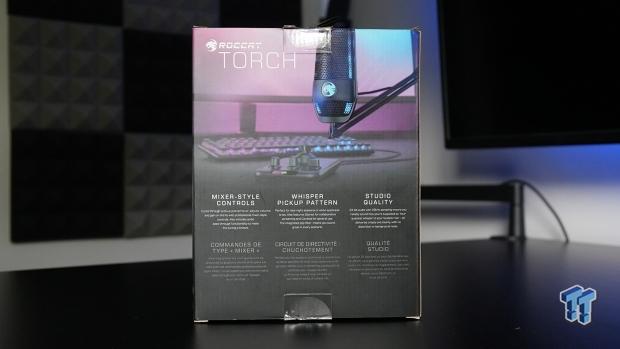 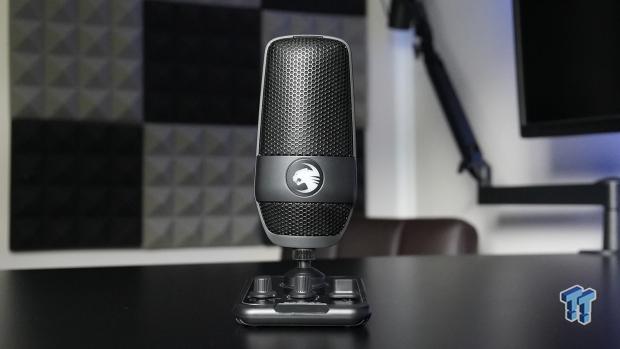 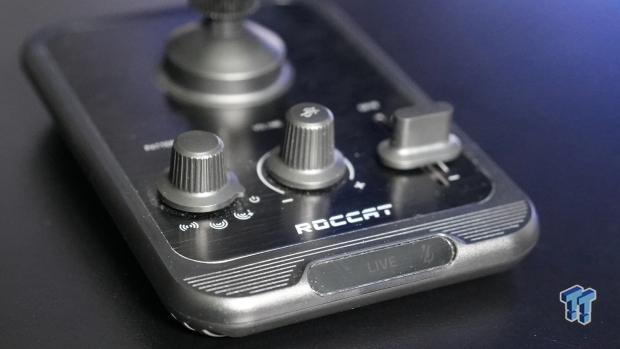 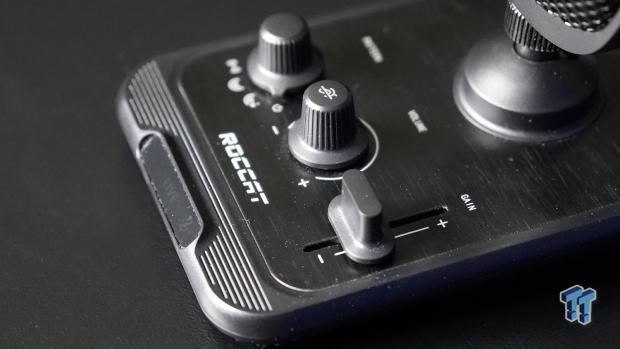 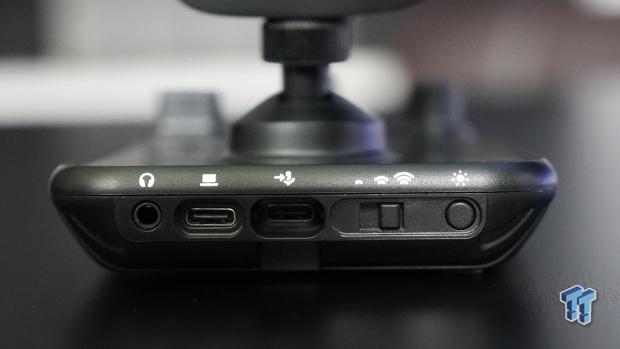 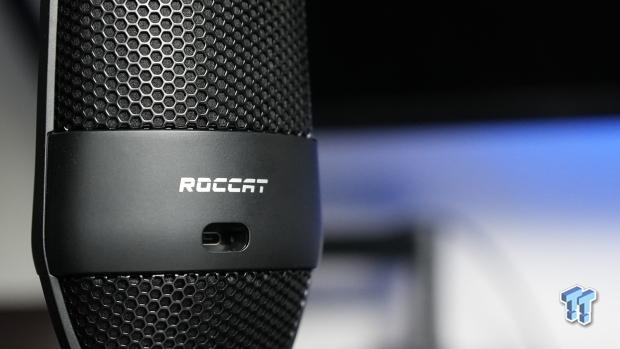 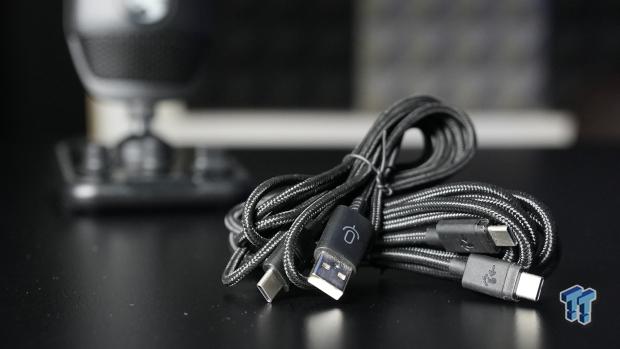 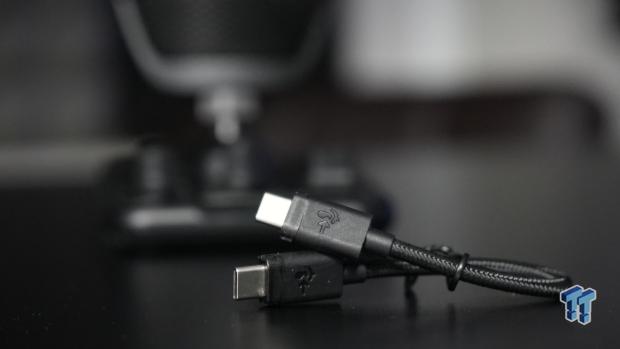 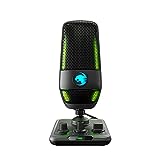 A three-setting switch on the back of the base alongside the I/O adjusts the sensitivity to allow it to be activated from further away, closer, or disable the feature entirely. Next to that slider is a button to control LED brightness, with choices for off, 25%, 50%, 75%, and 100% brightness. On the front of the base beneath the control knobs is a small panel that lights up with LIVE in green or a microphone symbol with a slash through it in red to indicate when the microphone is active or muted.

The cables are all black with a nice braided design, with little labels emblazoned on the connector shrouds that match the mixer base's I/O labels. Both USB-C to USB-C cables have small cutouts on either side of their connector shrouds to guide them onto small tabs around the USB-C ports in the microphone and the base to add stability to the connection.

ROCCAT does offer its Neon software, which is currently in beta, to unlock the AIMO reactive lighting functionality on the Torch. The software is rather barebones in the context of the Torch, only allowing the AIMO lighting to be enabled or disabled. When enabled, AIMO's "intelligent lighting engine" adapts to your play over time, according to ROCCAT, and will also sync with ROCCAT's other AIMO-enabled products such as keyboards, mice, headsets, and its mousepad. 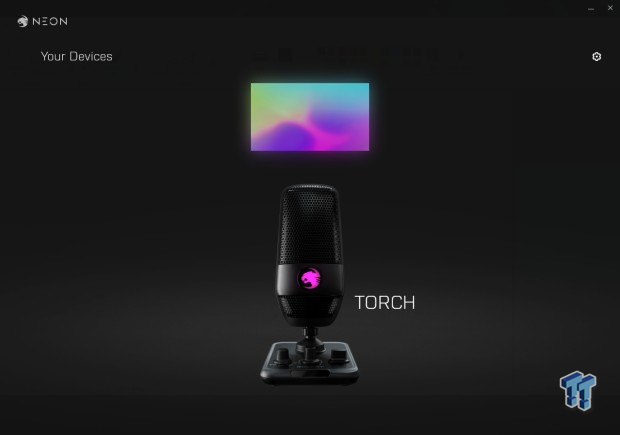 In the case of the Torch, only the ROCCAT logo begins to change colors according to what AIMO dictates. At the same time, the rest of the microphone's LEDs continue to reflect the current polar pattern or microphone state, which is a bit unfortunate when the Torch's other LEDs are capable of producing multiple colors that could be taken advantage of with AIMO. 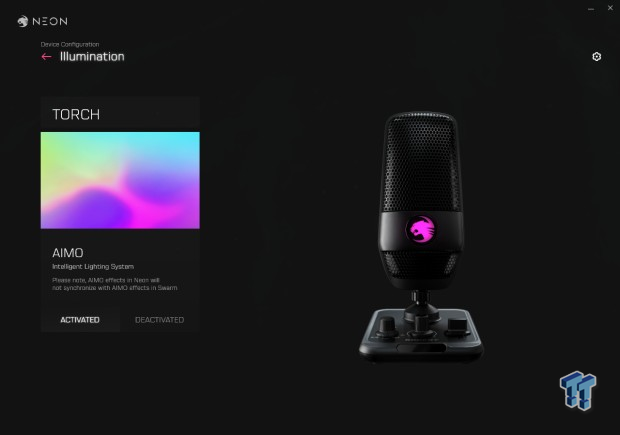 Despite ROCCAT writing on its website regarding AIMO that "RGB lighting often suffers from limited functionality or predictable, boring effects," it doesn't afford you the freedom to address all of the Torch's LEDs as you see fit. Hopefully, one day the Neon software will accommodate this, perhaps with the help of a firmware update for the microphone. 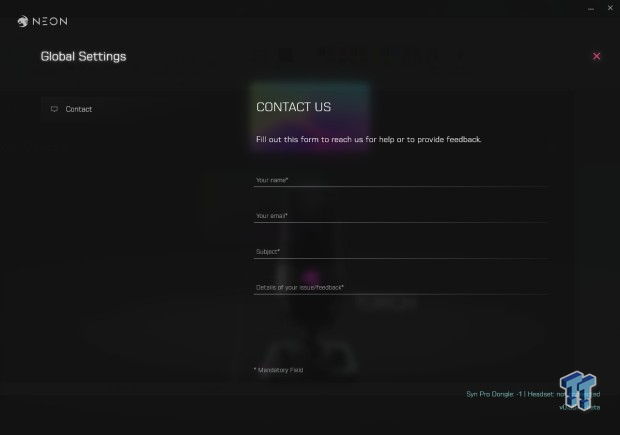 Also, as is expected from beta software, sometimes activating or deactivating AIMO simply doesn't work. In that case, you'll have to try powering on and off the microphone to make it work as expected. Lastly, to add to the few software woes, the Torch does not appear to be compatible with the Turtle Beach Audio Hub program, despite the listing on the side of the product box that says otherwise. The Turtle Beach website does not have the Torch in its list of compatible devices, and after downloading the suggested drivers, the Torch was still not detected by the program in my testing.

The Torch is plug-and-play and easy to use, requiring no driver software or application installations to get up and running. The Windows audio input and output devices are automatically switched to the Torch when plugged in. However, you may wish to change the output device back to your regular audio device if you are not planning to immediately use the 3.5mm port on the Torch for output.

The Torch comes with the ability to select between three polar patterns for choosing how the microphone detects audio; Cardioid, Stereo, and Whisper. The dial to control these starts with the power on/off symbol, so selecting any polar pattern invariably turns on the Torch. The leftmost pattern is the Cardioid pattern, which captures audio directly in front of the microphone and ignores the sound coming from elsewhere for clear audio during streaming or gaming. Next is the Stereo pattern, which utilizes both left and right audio channels to capture multiple sound sources. 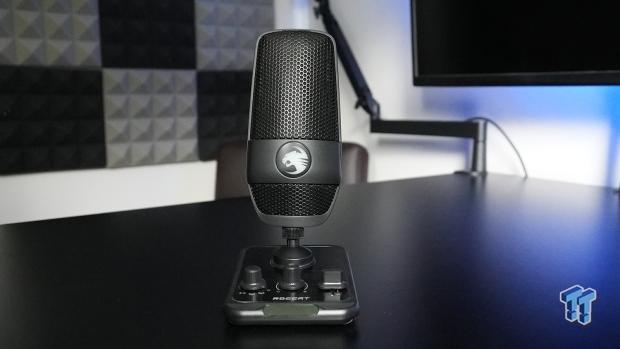 Lastly, the Whisper pattern is a proprietary polar pattern developed by ROCCAT that amplifies your audio when you need to be quiet and has been included exclusively for the Torch. The LEDs inside the microphone and behind the ROCCAT logo change color depending on the currently active polar pattern; green for Cardioid, purple for Stereo, and light blue for Whisper. Additionally, when the microphone is muted, the LEDs turn red; when it is on standby, they turn orange; when sleeping, they pulse blue.

When the Torch isn't set as an output device, the volume knob can be adjusted and will prompt audio changes in Windows to be shown on screen. However, the volume is not being controlled, and adjusting the system volume through other means will snap the volume back to what it was before fiddling with the Torch's volume knob, though this seems to be due to more of a quirk of Windows.

The microphone takes about a second to mute, as indicated by the LEDs changing to red, and about a second to unmute. The same applies to using the contactless mute sensor on the top of the microphone. The delay makes both feel a bit sluggish, especially for the sensor, which is meant to facilitate quick and seamless muting without the sound of flicking any switches or clicking any buttons.

The ROCCAT Torch is a well-featured microphone that is easy to use, owing to its upfront physical controls and plug-and-play functionality without software. 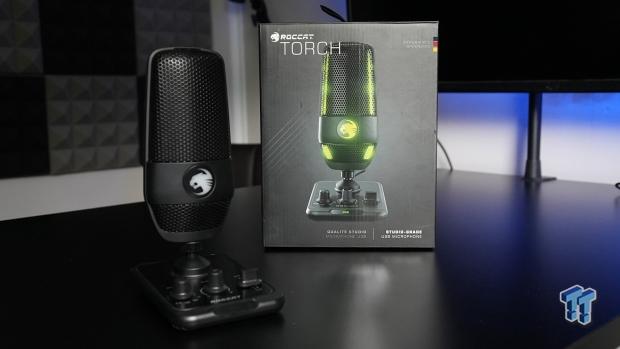 The audio quality is strong, and the build quality of the microphone, base, and included accessories are all high. The only thing left to be desired is the ability to customize the LEDs for any so inclined users, which ROCCAT can hopefully include in a future software update.