The Thunderbolt 3 interface has opened a world of possibilities for vendors to deploy high performance / high capacity platforms, whether it be a portable SSD or multiple bay RAID platforms. The 6Big is LaCie's mid-range solution sitting between the 2Big entry-level solutions and 12Big.

The 6Big is a standalone six-bay RAID platform developed to offer high-performance storage for creative professionals, slashing valuable time off post-production workflows. The 6Big, with capacity options up to 96TB, can ingest hours of RAW footage, allowing you to edit multiple streams at once, even uncompressed ten and 12-bit video.

Marketing performance of the 6Big comes in at 1400 MB/s, with several options available for capacity. At the bottom, 24TB is the lowest with a 48TB, 60TB, and 84TB model filling the gap between it and the top capacity 96TB solution. Each is deployed with enterprise-class drives - for us, it was Enterprise Capacity V5 from Seagate, while newer models will see the Seagate IronWolf Pro.

Compatibility for the 6Big includes both Windows and macOS with LaCie RAID Manager supporting both platforms. You will need a Thunderbolt 3 port as well. The MSRP of the LaCie 6Big Thunderbolt 3, in the 24TB capacity, comes in at $2109.99 with a five-year warranty. 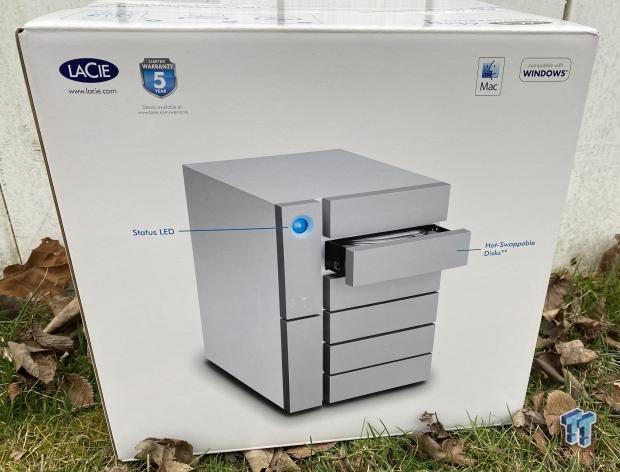 The 6Big follows the same packaging scenario we have seen from past solutions. White box, small amounts of branding top left, and image of the device centered. 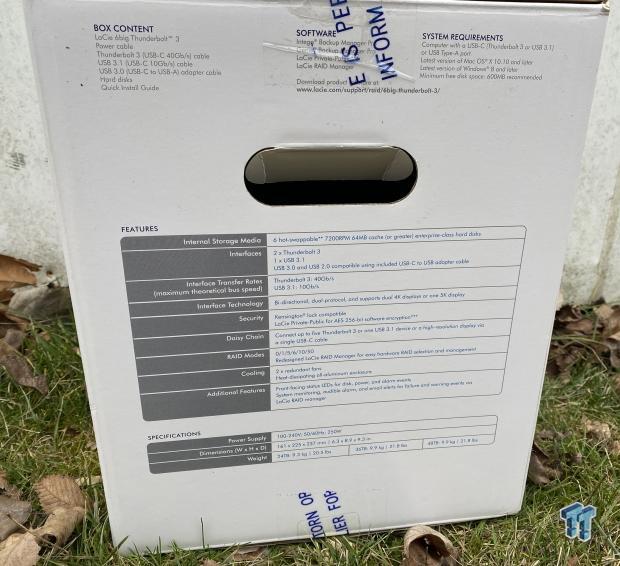 The side of the box has a full breakdown with features and box contents listed. 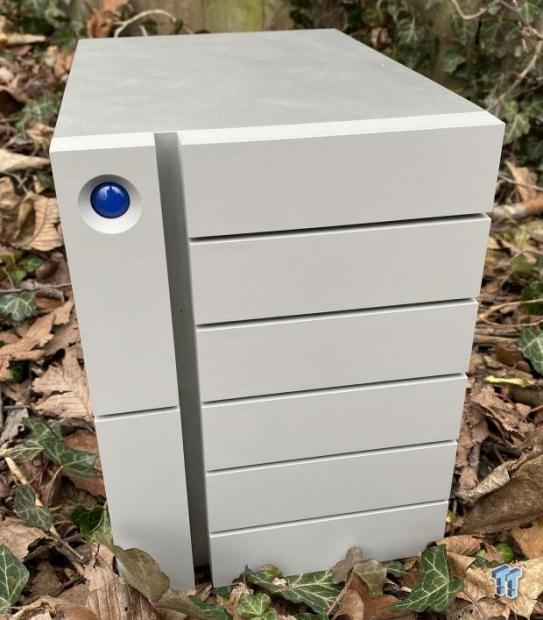 The 6Big sports the blue orb Neil Poulton design we have seen in past solutions like the 2Big and 2Big Dock. The aluminum chassis offers durability with access to all six bays from the front. 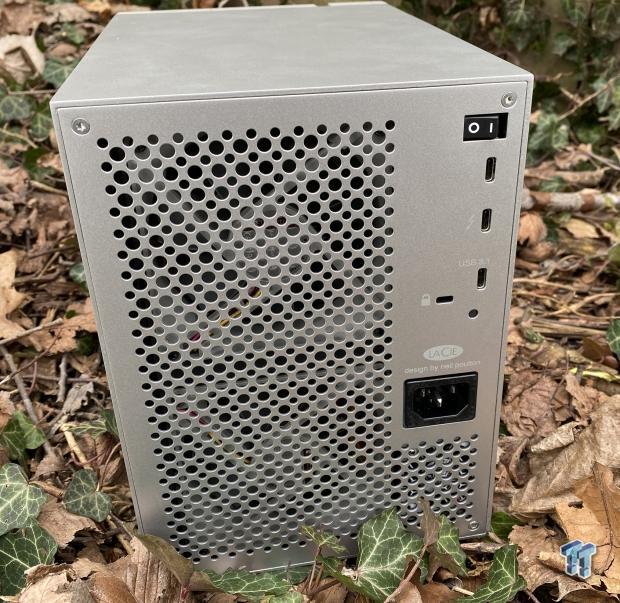 The backside offers two large cooling fans under a meshed aluminum panel connectivity to the right includes dual Thunderbolt 3 and USB 3.1 with a Type-C connection. 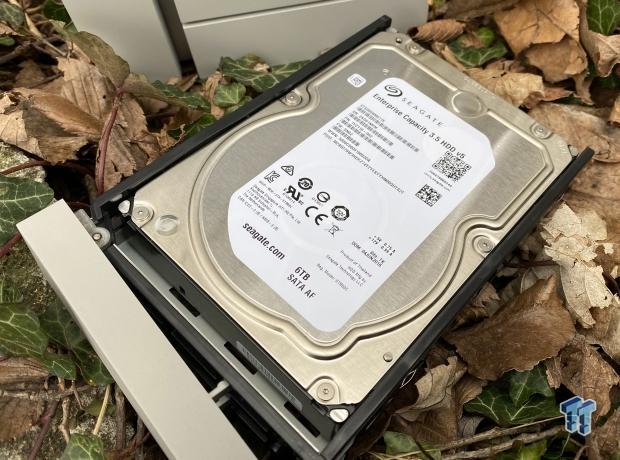 As mentioned, the 6Big sported Enterprise Capacity V5 drives for our sample, but newer models have IronWolf Pro. 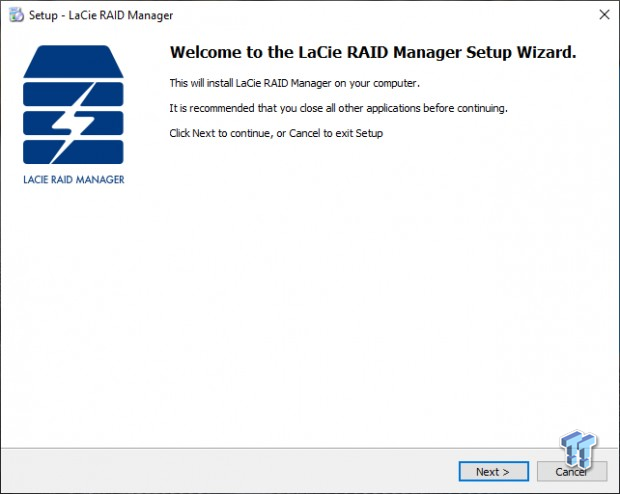 LaCie RAID Manager is the key to 6Big and 12Big RAID platforms. Setup is only a few steps. 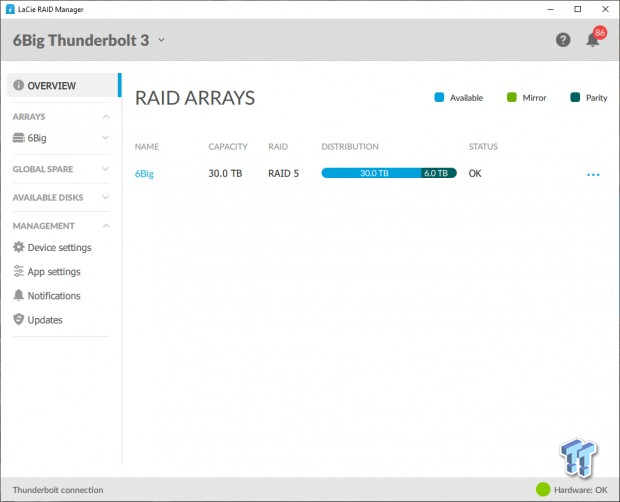 Once in, you may have to wait a moment for the system to populate your platform. Seen above, the overview gives you a breakdown of your capacity, what mode is in use, and the status. 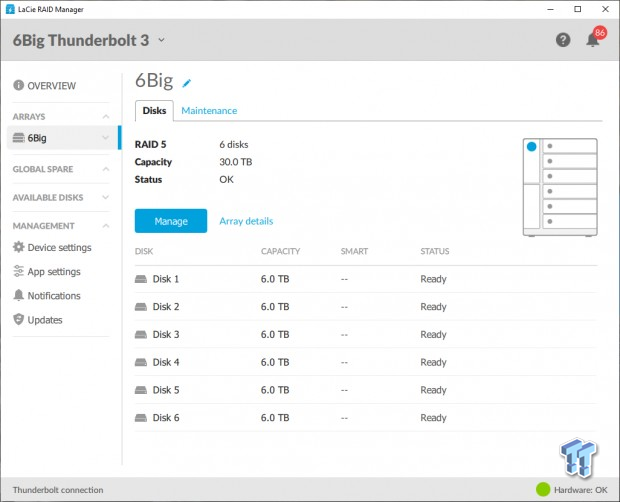 Moving to the array's menu, here is where you create and delete your RAID arrays. Below, you will see all the drives listed. 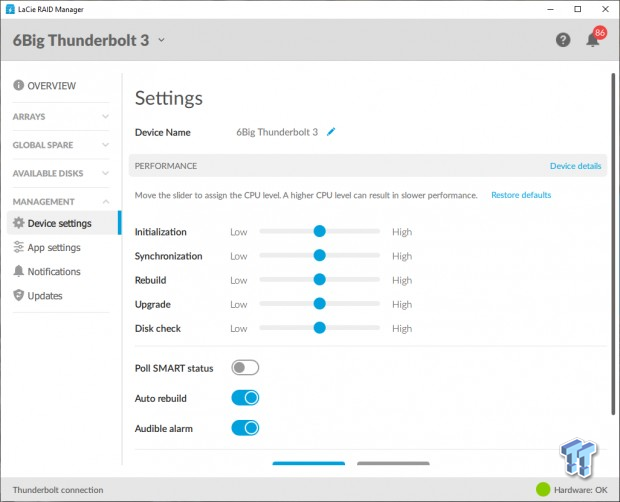 Device settings allow you to customize the performance of RAID operations using the sliders. You can also enable auto-rebuild and alarm if needed. 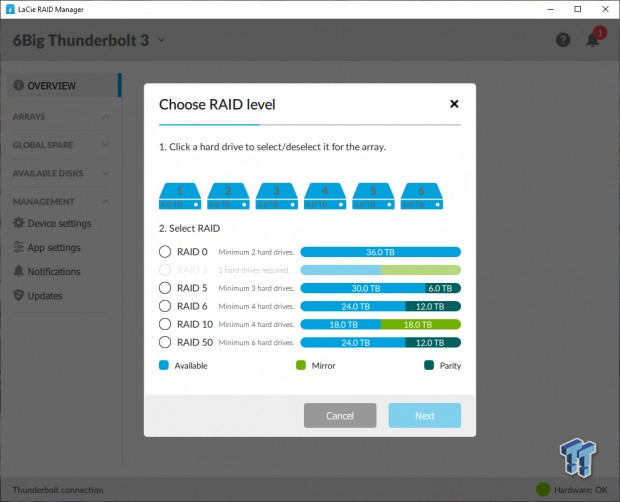 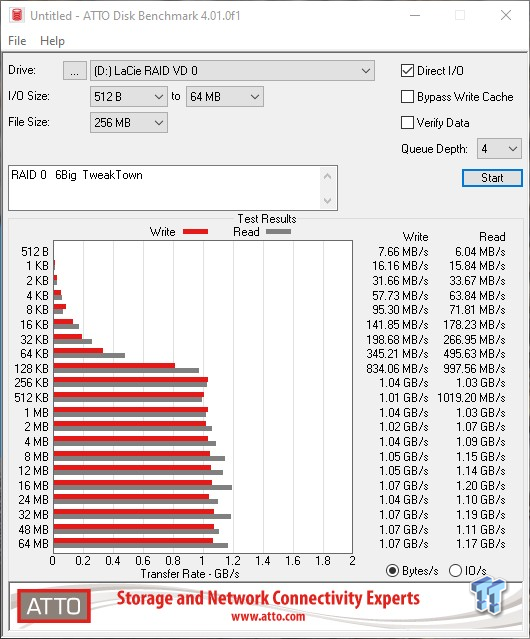 To get an idea of the performance, I used ATTO to do initial testing of the 6Big. In RAID 0, we see consistent performance - peaks around 1100 MB/s read and 1000 MB/s write. 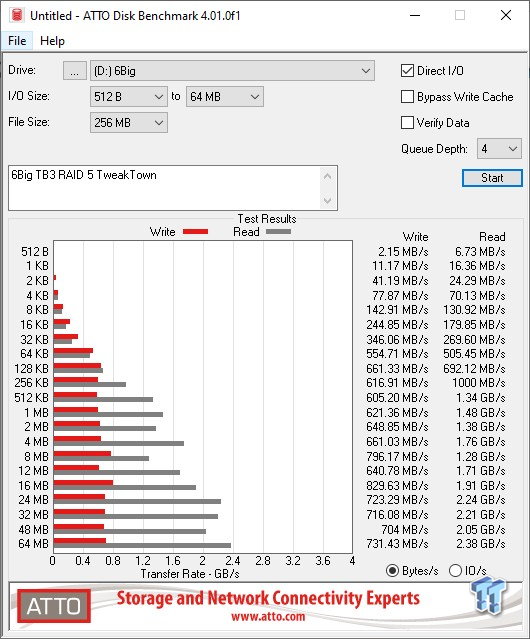 RAID 5 showed even better read performance up to 2.3GB/s with large file types. Write performance hovered around the 750-800 MB/s mark. 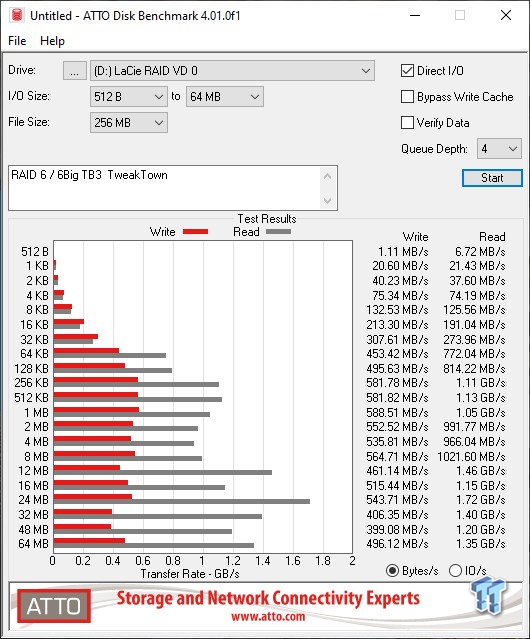 RAID 6 was more of the same with slightly erratic read performance going from 1.1 GB/s to 1.7 GB/s. Write numbers stayed within the frame of 400 to 600 MB/s. 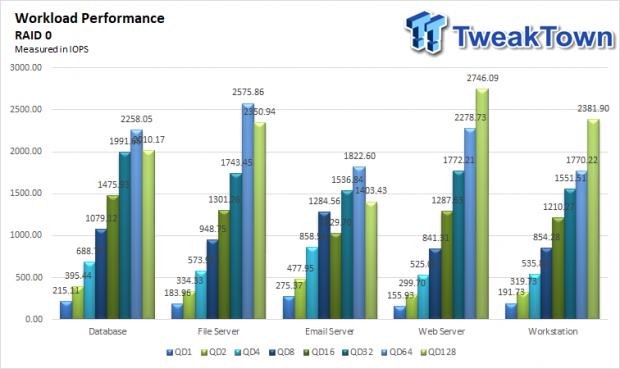 Running through standard workload testing, the 6Big produced a peak of 2746 IOPS, QD128, in Web Server. 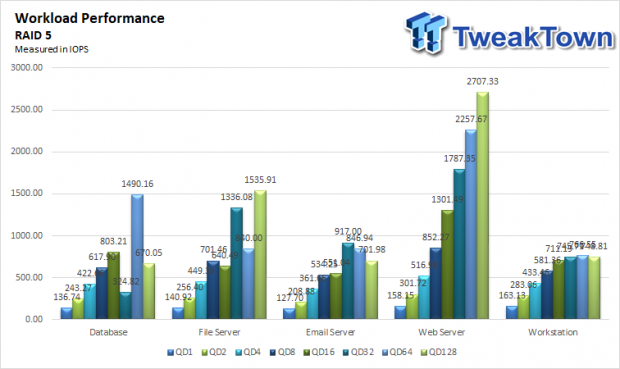 RIAD 5 saw a significant drop for most workload scenarios apart from Web Server, which still sees 2700 IOPS at QD128. 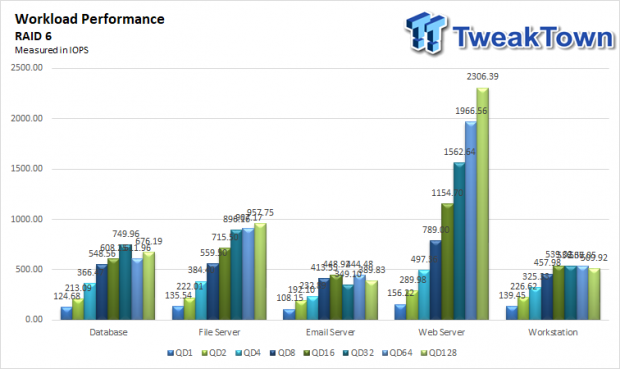 For a solution like the 6Big, build quality is at the top of the list for most. Coming away from this, I can say with certainty that this platform is built like a tank! For the most part, the 6Big sports a single-piece enclosure with internal steel supports. The rear panel is aluminum with a mesh cut out for the cooling fans. Drive trays are steel with plastic slides and plastic handles.

The 6Big isn't going to be for everyone. The significant investment into a platform like this alone will weed out those not truly committed. That said, with its MSRP at $2109 for the 24TB model, the turn-key nature of the platform is undoubtedly enticing, and with comparable solutions like the G-Speed Shuttle or Pegasus2 R6 coming in a bit higher, it's certainly worth putting the 6Big on your short-list. 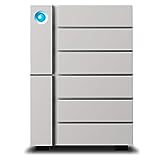 With the 6Big, LaCie has all the bases covered with both capacity and performance in a single appliance!