Corsair is no stranger to our case reviews, and they have had some that were good and some that were less than we expected them to be. Today we have one of the cube style iterations of a mid-tower chassis in the Crystal Series 680X. The 680X shares some defined previous chassis options Corsair offered, such as the air 540, 240, and associated cube style cases.

The Crystal 680X changes things up a bit for their cube style offerings, like the smoked tempered glass flanks the airflow openings for a unique aesthetic. With Corsairs' RGB options, it is only natural they would want to offer options where you can view RGB components such as fans. Corsair is attempting to embrace cooling focused users looking for a boutique-style chassis with cable management and component hiding capabilities that will attract those looking at showcasing specifically core components and liquid cooling.

Key features as listed by Corsair are as follows:

This feature set is quite good, and the inclusion of a surround tempered glass around the central chamber makes for an interesting dichotomy between plastic and glass surfaces. The ability to it multiple radiators internally will appeal to many liquid cooling enthusiasts, and having the high speed I/O ensures Corsairs' design does not feel dated.

The Corsair Crystal 680X came to market with a part number of CC-9011169-WW, which is not as simple to be able to remember as some we have reviewed previously. The dimensions of the cube style mid-tower come in at 505mm tall, 423mm deep, and 344mm wide. As you can see, the width is quite higher than a normal mid-tower, and this is due to the dual chamber design, which houses the storage and PSU behind the motherboard tray.

Motherboard fitment for the 680 is from ITX up to EATX. HDD and SSD are as previously mentioned with larger 3.5" coming in at three available trays, and a plastic quick-release cage for 2.5" drives carries up to four. PSU fitment is virtually unlimited with a spec of 225mm, and consumer PSU's don't stretch that far with one of the largest we have seen reaching 200mm for the Corsair AX1600i or even the EVGA SuperNOVA 1600W T2 at 220mm. Most users will likely employ a much more modest PSU in the 140 - 180mm range. There is technically not a PSU shroud as the entire rear cable management chamber is where the PSU resides along with storage, which all are found behind or adjacent to the motherboard tray.

Fan fitment has already been mentioned with up to 8x 120mm (3x front, 2x top, 1x rear, and 2x bottom) or 7x 140 (2x front, 2x top, 1x rear, and 2x bottom). Radiator fitment is the same fitment for radiators as its associated fans. If opting to air cool your CPU, the limit to height will be 180mm, which is not much of a ceiling and will allow pretty much any CPU cooler we have seen. The included fans are a point of interest for the 680X as it comes with triple 120mm LL RGB PWM fans in the front and a standard chassis fan on the rear as exhaust.

The 680X comes to the market at $249.99 and comes head to head with the Lian Li PC011 Dynamic XL. Corsair is going to have to show some excellent performance to fight against the PC011D XL model as that performed well in both performance and aesthetics. 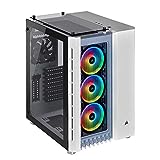