The Mushkin Helix-L is one of the best values available today for shoppers looking for a great user experience without the bill to go with it.
Buy at Amazon

Mushkin has a strong SSD line-up for 2019, but the company slow-walked new models to market. Amazon still shows SM2262-powered Pilot models in stock even though competitors ADATA and HP have long sold out of SX8200 and EX920 drives. The 2018 inventory may have played a role in the 2019 line-up delay. Regardless, the new Pilot-E and Helix-L hit Amazon recently, and we're ready to see what the American SSD company has to offer.

Today we're testing the mainstream model from Mushkin 2019 product line, the Helix-L. This NVMe SSD uses the Silicon Motion, Inc. SM2263XT controller with Micron's mighty 64L 3D TLC. Technically this is a DRAMless SSD, but through the magic of PCIe, the drive uses a small portion of your system's memory to map the flash translation layer giving the Helix-L similar performance to more expensive mainstream products with a DRAM buffer.

The endurance doubles with each capacity starting with 150 TBW for the 250GB drive. The 500GB allows for 300 TB of warrantied writes, and that again doubles to 600 TBW for the 1TB drive. The series carries a 3-year limited warranty. 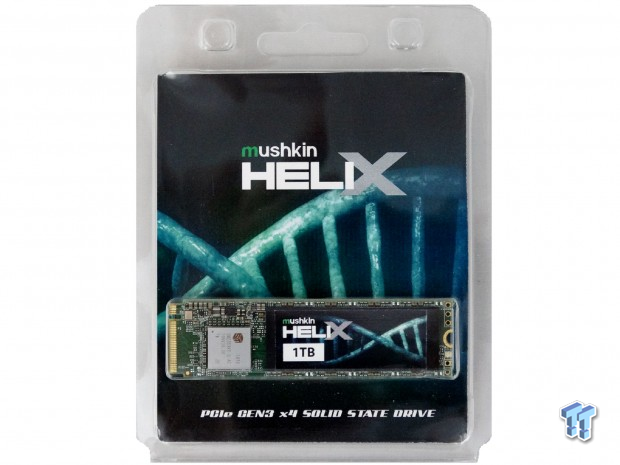 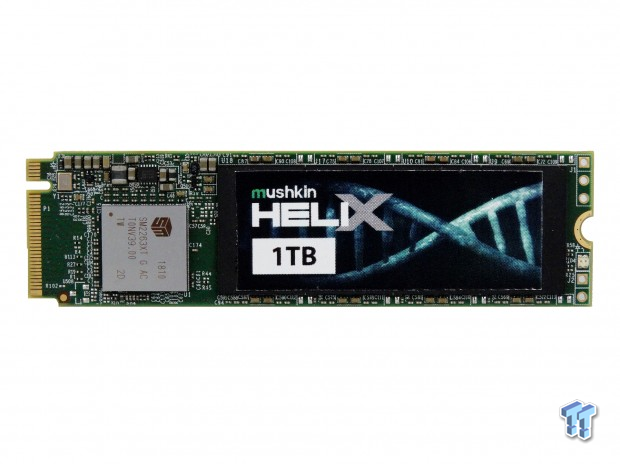 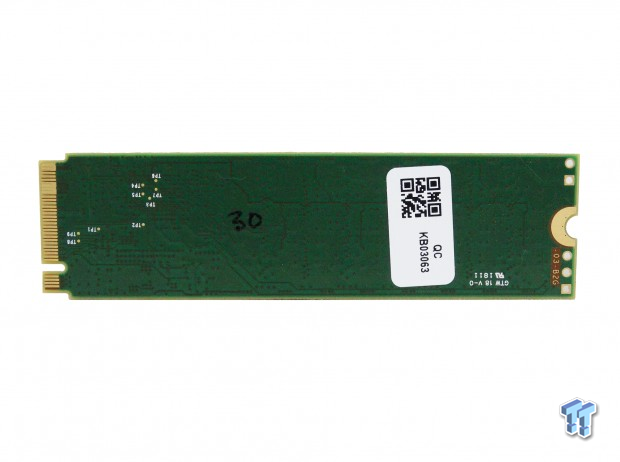 The Helix-L ships in a retail-friendly blister pack. You will quickly notice the package and the drive label list this as the Helix and not the Helix-L. The drive doesn't change much from the reference design SM2263XT we tested for Silicon Motion over a year ago. At the time, we never expected to see a 1TB NVMe SSD sell for less than $100.

We filled our charts with other lower-cost drives selling today plus the original Samsung 970 EVO (later replaced in Samsung's line-up with the 970 EVO Plus). The Helix-L is the only DRAMless model on the list, but it competes directly with the 4-bit per cell (QLC) drives from Intel and Crucial. The SX8200 and EX920 use older flagship controllers from Silicon Motion, the same also used in the Mushkin Pilot. The Pilot joins the other drives on Amazon today, but they all cost between $20 and $30 more than the Helix-L.

In the sequential read test where we scale the workload through queue depth (QD), the Helix-L trails the other drives but is very close to the Crucial and Intel QLC models it competes with directly on price.

The Helix-L also shows low performance in the sequential write test. DRAMless SSDs generally don't scale well with increased QD in write tests, so the results on this chart were expected. Users do get nearly 1,500 MB/s for transfers to the drive. This is nearly a 3x increase over high-quality SATA SSDs that sell for around the same price as the Helix-L 1TB.

The architecture uses a dynamic SLC buffer that scales depending on the amount of data you have on the drive. The system works well unless you fill the drive. We recommend keeping 20% of the drive's overall capacity free when possible.

We expected to see higher random read performance with the 1TB Helix-L. The drive matches the 1TB Samsung 970 EVO, so that's a plus. It also trails many of the other drives with the same Micron 64L flash. This is one of the areas where Micron's flash increases performance over Toshiba and Samsung with many products. In addition, the performance metric makes your computer feel fast using consumer-grade applications.

Even though the performance is on the lower-end of the scale between the drives tested, you still get nearly 12,000 random read IOPS at QD1. This is more than most SATA SSDs, and two years we would call it a performance leader for even NVMe products.

The 1TB Helix-L scales incredibly well with random data writes for a DRAMless drive. This is where the host memory buffer (HMB) technology really helps to increase performance. The performance path is nearly identical to the ADATA SX8200 from QD1 to QD8.

Mixing sequential data, reads and writes, the Helix-L outperforms the two QLC SSDs in our charts today. The Helix-L doesn't quite make it to the level of the DRAM drives with TLC memory.

Where the 1TB Helix-L stumbles in our synthetic tests is the random mixed workload. The drive only delivers 1/3 the performance as the next lowest drive at QD1, and the gap grows from there as you move up the list. This impacts multitasking and leads to more latency running several applications at one time.

Moving over to real-world workloads, this page shows the real impact of the sequential tests ran on the previous page.

Loading your video games is not IO intensive on its own. The Mushkin Helix-L stays within one second of the fastest drive on the chart today. The Helix-L is even faster than the mighty Samsung 970 EVO at this task.

The PCMark 8 Storage Test uses nine real-world applications in ten scenarios to measure storage performance. The applications vary from games to heavy Photoshop use giving is a well-rounded view from consumer to professional.

The Helix-L comes up short here, but the stumbles come from the heaviest of workloads in this test suite. The more basic tasks, launching and editing a Word document, loading games, and so on perform close to the class leaders.

The PCMark 8 Extended Storage Test starts with the drives in a dirty state, how your drive would be after heavy writing. This degrades the ability for the cache to increase performance and is very similar to running your PC with a full or nearly full drive.

The performance is inconsistent with most of the lower-cost drives in the chart. Samsung's V-NAND performs well even though it too relies heavily on the SLC buffer that the company calls TurboWrite.

The Total Service Time Test measures latency in the same tests. Latency has always been an issue with entry-level and mainstream SSDs, but the move to 3- and 4-bit per cell flash has ramped up the problem. In the recovery phases of the test, the Helix-L's firmware and programming keep the latency at an acceptable level. Many of the other drives, some costing quite a bit more, fail to keep latency in check after a heavy workload.

The SYSmark 2014 SE System Responsiveness Test is a system-wide measurement designed to compare PC to PC. We use this test to isolate the storage to take advantage of the application suite. This is your "feel" test, how quick the PC moves between applications, starts, and finishes tasks.

Like the previous test, the Helix-L performs well in this test thanks to the architecture and Micron's 64L memory.

In general, DRAMless designs don't perform well in the notebook battery life test using MobileMark. Mushkin managed to break the mold and surpass five hours of time on a single battery charge. Our test system is a Lenovo Ideapad Y700-17. This is a gaming notebook designed for high performance and high frame rates rather than battery life.

The 1TB Mushkin Helix-L performs much better in real-world applications than the synthetic workloads and specifications sheet lead us to believe. If your daily computing involves gaming and typical office activities, then the Helix-L is a strong low-cost option you should seriously consider.

The 1TB drive currently sells for less than $100 at Amazon, and that's a real bargain. There are products that deliver better performance, and SATA SSDs in this capacity that cost less, but the combination and overall value is strong with this model. The two smaller capacity drives priced at just $37.99 (250GB) and $54.99 (500GB) show strong potential when it comes to overall value. If you run a system with more than one drive and need a new boot drive with low latency, the smaller drives are worthy of consideration, too.

The real trouble comes in when you have a little more money to spend. Mushkin's new flagship model, Pilot-E, currently sells for just $139.99 in the 1TB capacity size. It's $40 more, nearly a third, but if you want the extra performance for heavier workloads, it's difficult to pass up.

For most of us, the Helix-L will deliver a strong user experience and give us years of enjoyment. We wish Mushkin would bring more 2TB models to market since the company's price points are so strong. Mushkin is one of the price-performance leaders right now and has been for the last couple of years. The Helix-L is another model that doesn't have a big following, and people rarely talk about, but it's one of the better options for cost-conscious shoppers available today.

The Mushkin Helix-L is one of the best values available today for shoppers looking for a great user experience without the bill to go with it.