Last we saw a CPU cooler from ARCTIC, it was the Freezer 33 eSports Edition, and sadly, while it was capable of cooling our CPU without throttling, compared to the mass amount of coolers we have to compare it to, we ended up not giving it that good of a rating.

However, after ARCTIC saw the review, they swiftly urged us to look at the next evolution of that cooler, to see if our opinion could be swayed in their favor this time. Here at TweakTown, we are all for advancements in technology or any improvements that the customer can benefit from, and with the latest cooler from ARCTIC, we have found that improvements are afoot.

With this latest cooler, ARCTIC did not just put lipstick on a pig and call it new. They went back to the drawing board to think about what was right on the Freezer 33 series but also took into question how they can make it better, and have made adjustments. For instance, the Freezer 33 is shorter than the current offering, and mainly due to ARCTIC adding five more fins to the stack, however, the thickness of the fins has gotten thinner.

At the same time, the weight had been reduced, and ARCTIC has also opted for a different set of fans to cool the new tower, with a broader range of speed, and a slight increase to the noise that comes from it. Outside of those changes, we do see much of that the Freezer 33 series offered, including the options of red, yellow, green, and white colorations to help these new coolers blend in with a build.

The Freezer 34 eSports Duo is the cooler in question today, and we can report that things have gotten better, thermally, for ARCTIC. Anyone into coolers realizes that there are many components to making a cooler produce good results, and the increased fin stack and faster fans are all part of that.

However, there has to be some give and take with the noise levels to get said performance. The question left then is how much noise can you tolerate, and is the sound worth the change? We plan to dive into all of these things and see if ARCTIC has improved the design enough to warrant the masses to run out and buy it. The Freezer 34 eSports Duo is compatible with all of the same platforms as its predecessor, where Intel is covered on LGA 115X LGA 2011 and v3, as well as LGA 2066. However, if you have an AMD processor to cool, it will have to be from Socket AM4 to use this tower. Dimensionally, the cooler stands 157mm tall now but remains 124mm wide and 103mm from edge of the front fan to the edge of the rear fan.

Total weight now is only 764 grams, down from the previous model, while using the same base plate with the exposed Direct Touch 6mm diameter heat pipes, of which there are still 4. Rather than a few less, yet thicker fins, this time around, ARCTIC opts for 54 aluminum fins in the stack, but each fin is 0.1mm thinner than in the Freezer 33. All of the changes to the design of the tower seems to have done little for the TDP, but it is still rated at 210W, which is plenty for any of the compatible processors.

The choice of fans has changed from the Freezer 33 to Freezer 34. Rather than opting to keep the 1800 RPM BioniX F120 fans, for the Freezer 34 eSports DUO, we see ARCTIC moved to a higher speed, BioniX P120 fans to flank this tower. Each fan is capable of speeds ranging from 200 to 2100 RPM this time, but all of the technical specs need to be found in the case fan category, by finding the BioniX P120 fans.

Once there, we see the fans are rated for 67.56CFM with 2.75mmH20 of pressure per fan, at maximum RPM. As for noise, the tower is rated at 0.5 Sone, which translates to roughly 25 or 26 dB(A). Looking at the fans specifications chart, ARTIC says there that they are rated at 28 dB(A). The last thing to mention, and an important note to many potential customers, is the mention of the ten-year warranty, which is one of the best in the game right now.

At the time we looked at the Freezer 33 eSports Edition, the cooler was demanding $47.99 to obtain it, which any cooler below the $50 mark is a slight win for the customers in our book, but ARCTIC felt they could do much better. Currently, as we dive into the interwebs for a price check, we are impressed with what we are seeing. At Amazon, they have the Freezer 34 eSports DUO listed at just $39.99 with ARCTIC registered as the seller.

Dropping by Newegg for a look-see, we found the Freezer 34 eSports DUO is even more affordable. Right now, Newegg has the best deal, where we see a price of just $34.99 with Newegg as the listed seller, and that offer comes with free shipping. So far, things are stacking up in favor of the Freezer 34 eSports DUO, but let's have a look at it and see how it performs before making any final judgments this early in the game. 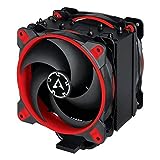