Anyone who followed the evolution of Enermax fans knows all about the Twister fans as well as the T.B. Vegas offerings. They have been a mainstay for Enermax, and along the lines have not only come up with fancy lighting back before RGB hit like a storm, and were innovative products as well. In fact, Enermax was one of the first manufacturers to offer fans with removable blades, which put them leaps and bounds above most others, especially when it came to cleaning and dust removal.

While we have seen just about all their fans to date, some of them presented in cases, many of them offered with various CPU coolers, we can say that we have never been disappointed with what Enermax has tried to bring forward into the fan market. That being said, it only makes sense that Enermax tries to get their own piece of the RGB pie and deliver fans with that specific capability as well.

Whether in the market to fill a chassis, looking to reduce noise, or looking for yet another option for RGB illumination of any case or cooler, Enermax has come up with something new. Today we have the 120mm Enermax T.B. RGB fan 3 Pack to discuss. The model number to this exact set of fans is UCTBRGB12-BP3, and in that product, you will receive three fans, a hub, and IR sensor, and remote control. Each fan in the kit will produce up to 47.53 CFM with 1.66 mmH2O, and the kit is covered with a one year warranty. 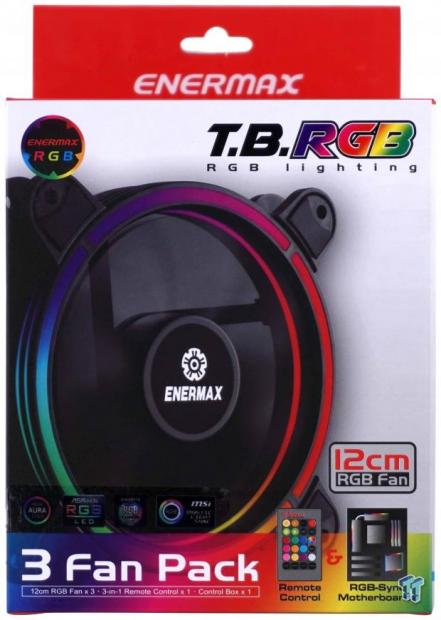 The packaging is quite bright and will attract your eyes to it right away in the sea of dark-colored packaging of many other solutions. On the front of the box, you see the fans with RGB illumination displayed on them, as well as the name of the fans above it, and a notation to their size below. Along the bottom of the box, we find this is a kit with three fans, there is a remote control for them, and the T.B RGB fans will also work with motherboard RGB control options. 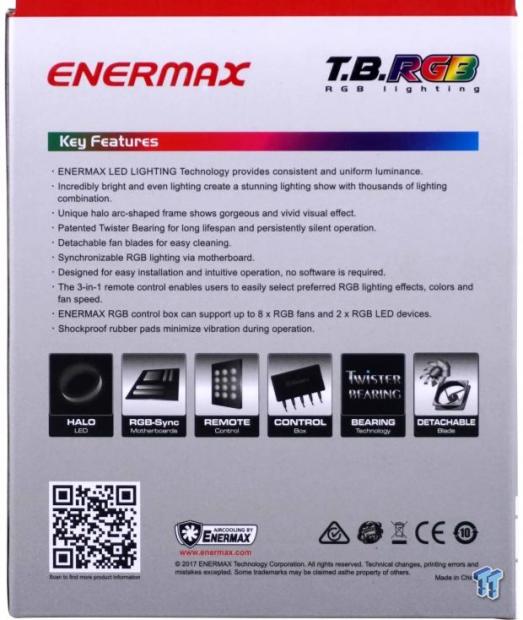 On the back of the box, more features are covered. We find mentions of LED lighting with superb brightness, unique frame, detachable blades, synchronizable RGB, 3-in-1 remote, and a hub which supports a total of eight fans. The icons across the back relate to many of the above features, but we also see the Twister Bearing mentioned, which leads to the name of the fans.

When the box is initially opened, the hardware box is resting on top of the boxes of fans. In it, we find the remote control, variously sized magnets with tape on the back to secure the remote and the fan hub, twelve screws to mount the trio of fans with, and the Molex power lead, which contains the IR sensor for the remote to signal to.

On either side of the fans, you will find four rubber pads to isolate the fans from cases or coolers, and each of the fans have seven black blades surrounded by rounded black frames. Four sections of the frame are cut out on the front edges, which allows the lighting to be easily seen. However, Enermax also makes sure these fans are brilliant looking from the side view as well. 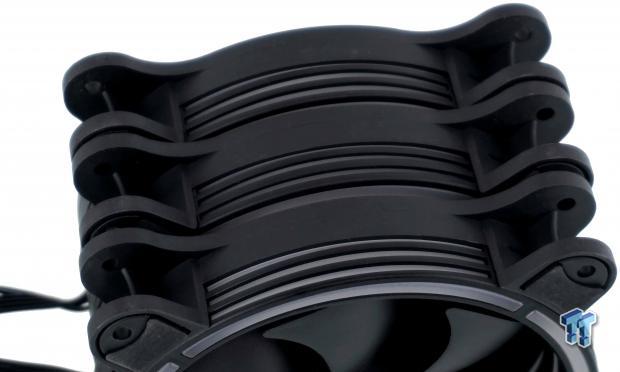 To brighten up the interior of a chassis, even more, Enermax also puts slits on each side of the fan frame, three in each of the four sides. These are all illuminated by the same wide opaque plastic section inserted into the frame, each of which contains roughly 20 RGB LEDs delivering a smooth, blended appearance of illumination versus the older T.B. Vegas fans where individual LEDs stuck out like sore thumbs. 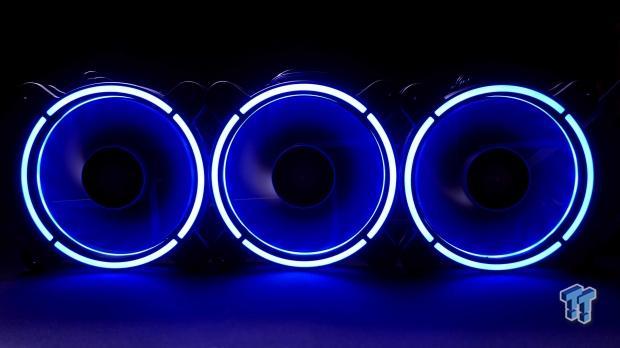 This may be only one of ten solid colors to be chosen, one of six modes, and the brightest of ten LED intensity levels, but it does go to show the amount of light which the Enermax T.B. RGB fans deliver to any environment. While the fans do not look bad from the front, our next image will show you just how nice the fans look from all views. 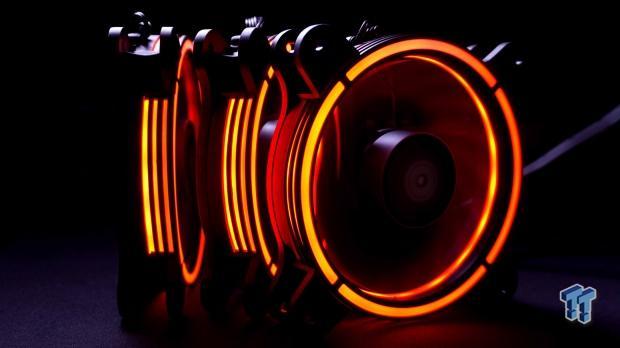 Typically, when moving to the side of the fans we have tested in the past when you move to an angle from the side, or even ninety degrees to the fan, either all of the lighting is on the leading edge, or none is visible at all. Through a tempered glass chassis, not only will the light shine through the front, but as long as these are not blocked by a radiator, the illumination can be enjoyed looking into the side panel of the chassis as well.

As far as performance is concerned, the near fifty CFM of airflow seems to be pretty standard right now in the RGB fan market. We do wish that there were options with more airflow and static pressure for use with radiators or thick tower coolers, but we also concede that manufacturers value silence over performance in instances such as this. With sufficient airflow coming from them at max RPM set with the remote control, the noise level does not cross the 33 dB mark.

However, if dust filters are placed close to the leading edge of the fans, they can tend to whistle a bit. What we do like when employing our dust filter treatment, is that the filters play less on airflow than many others we have seen. While it is reduced somewhat, it is much less noticeable with the T.B. RGB fans.

We do like the illumination, and we love that they can be set to match the motherboard via a 4-pin RGB connector, which is optional to connect, we do find the need to place a sensor for the ability to control them a bit complicated at times. In many cases, users will want to hide the wires, and not just have a sensor taped to the inside of the door panel.

This can complicate things slightly as the remote does require a direct line of sight for the remote to function. Even so, we had fun watching the various modes at work, the RGB mode is a calm blend of colors from one end of the spectrum to the other, and the ability to control fan speed as well as LED intensity from the remote is also convenient features to have. All around, the fans are well built, they deliver airflow, and look good doing it.

As it is right now, we are finding the Enermax T.B. RGB fans in two different package deals. The first is the three fan pack that we received, which is pleasantly priced at just $59.99. If you want to double down and get six fans at once, look for the UCTBRGB12-BP6 offering, which is a better deal yet at just $99.99. That is nearly the same price as what other 3-pack fan sets are selling for.

Oddly enough, even though each hub can control up to eight fans at once, we are not seeing any single fan offerings to complete the set at this time. If RGB fans are on the brain, and you want fans which not only present themselves from the front but also like the idea of some side illumination, Enermax has what you need at a more than fair price point. They may not be the easiest to install or use, but Enermax packs in the features, delivers similar performance to the rest of the RGB fans we have seen, and do so without digging as deep into your pockets as they could.

The Bottom Line: Stellar fans if you have deep pockets! For the money, we would opt for the LL140 fans as they have the best features but for a subtler look, the ML140 PRO RGB fans are a good choice. Beyond the lighting, we do feel that the ML-Series is the better fan of the two!