Not that long ago, we had a look at the smaller diameter trio of fans from Corsair, from their QL Series. What we found out then was that if anyone is in the market for the best of the best in fan RGB LED lighting and control, with the pockets deep enough to obtain them, they are well worth the investment. With that in mind, we have similar expectations of their bigger brothers that showed up with the 120mm trio.

This time around, we are digging into the iCUE QL140 RGB 140mm PWM Dual Fan with Lighting Node Core kit of fans! The contents are the same as what we saw last time with two changes. The fans are now 140mm in size, and there are only two, rather than three fans. The CO-9050100-WW kit specifications showed us that both fans could deliver 50.2 CFM, which is a bit more than the 120mm versions. However, with more CFM comes slightly less static pressure, with the QL140s rated at 1.4mmH2O. Of course, you also get the Lighting Node CORE in the box, along with all of the goodies needed to get everything installed and illuminated! The last thing you may need to know is that these fans, whether sold as a kit or when buying them individually, is that they come with two years of warranty coverage.

For those of you who have seen the QL120 fan review, we spilled the beans for this review, as it will take a small catastrophe or a considerable hike in the price to give us a reason not to like the larger QL140s as well! The thing is, though, we have all of that information already, and we can say Corsair did not let us down. At this time, we see that the QL140 RGB LED fans and Lighting Node Core kit is selling at $119.99 currently, and adding extra 140mm QL140 fans, they will cost you $49.99 per fan. Keep in mind; single fan packs do not include a Node as far as we can tell! 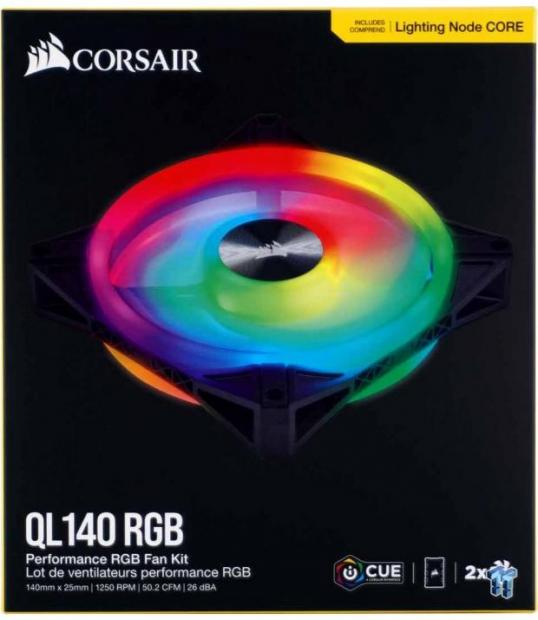 Corsairs name and logo are the first things you see at the top of the box, and in the much smaller text, we see mention of the inclusion of the Lighting Node Core. The image of the fan in the center is overexposed, but it highlights the fact that the RGB lighting is why you will buy these fans! At the bottom, we see the QL140 RGB name as it is called a performance RGB fan kit, with notations of iCUE support, and that the Node and two fans come inside the box. 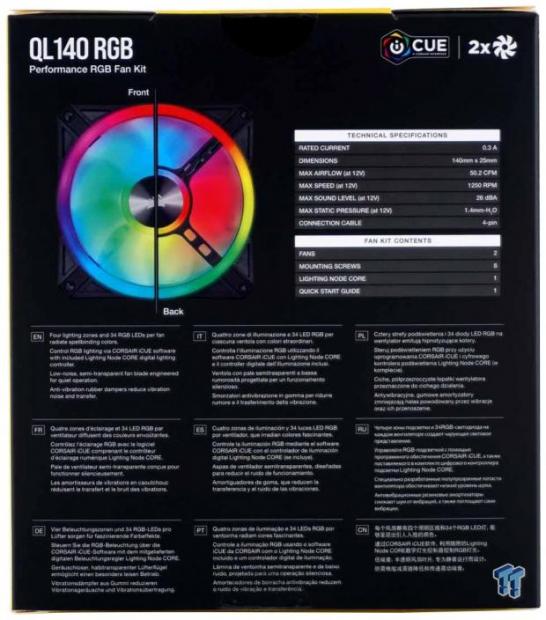 Now looking at the back of the box, we see both sides of the fan to show how the lighting is displayed, while to the right is a list of specifications. What we did not cover earlier is the 140mm fans 25mm thickness, the draw of 0.3A, and its 26 dB(A) noise rating. The lower section includes the light zones and the fact that each fan contains thirty-four RGB LEDs, that iCUE is used to control them, that they are engineered to be quiet, and anti-vibration measures are taken. 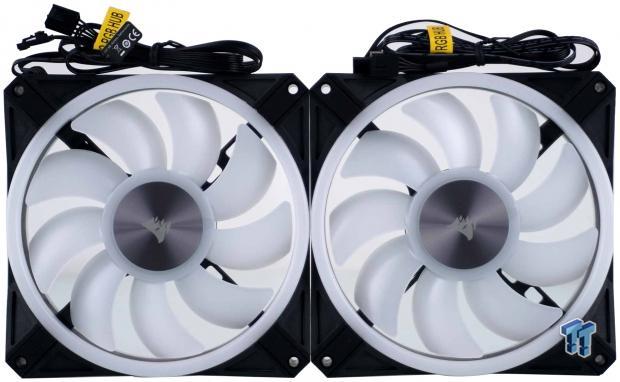 As the QL 120 fans do, the QL140s we have here look just as good, only bigger! Thick and rugged black frames surround the white hub and nine blades. With RGB LEDs in the fan hub as well as around the rings, Corsair ensures you are in for one hell of a light display from these fans! We would also like to point out the metal sticker on the hubs, as it is a high-end touch we did not expect in this series. 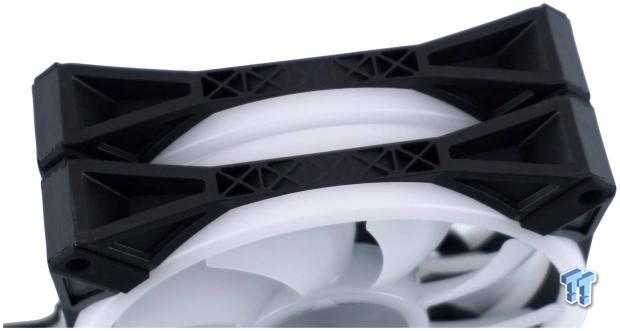 The frames are beefy near the corners, to ensure rigidity is kept when thinning the span between corners with the X-braced section between them. Doing this makes the rings on both sides of the fan easily visible from more angles that we have seen in previous models. Corsair also opts for a thick rubber sticker over the mounting holes, which spaces the fans a bit, but also stops vibrations from getting to the case. 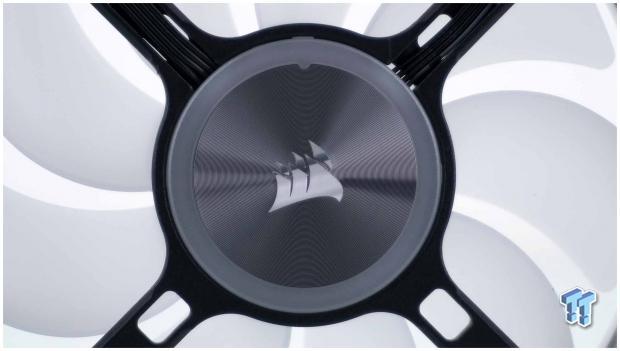 The back of the fan has the support X-frame with a lead running from the hub out two of the arms. In the middle of all of that, where we typically see a generic fan sticker, Corsair made sure what whichever way the fans were installed, that metal sticker with the corsair logo is plainly visible!

Each fan in the kit comes with a serial number that matches the other down to all but the last number. Each fan is identified individually with a -1 or -2 at the end of the number. To the right of the stickers is where the directional arrows are found to help ensure air is flowing in the intended direction when it comes time to install them. 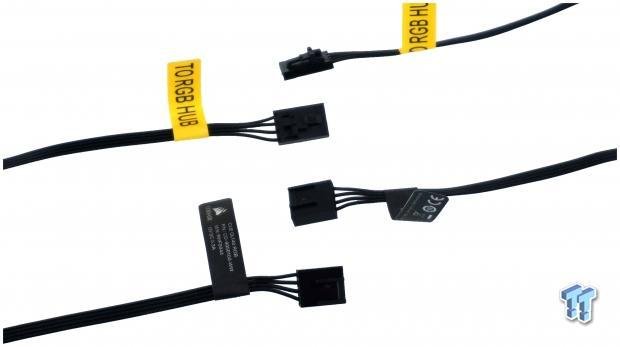 Each of the two fans has two leads. At the top are the 4-pin plugs that work exclusively with Corsair products, to control all of that RGB LED goodness. The lower pair of connections are standard 4-pin PWM fan leads, which allows the motherboard or fan hub to control the speeds. All four cables are roughly two feet in length, and with the RGB hub placed well, wire management will be of little concern. 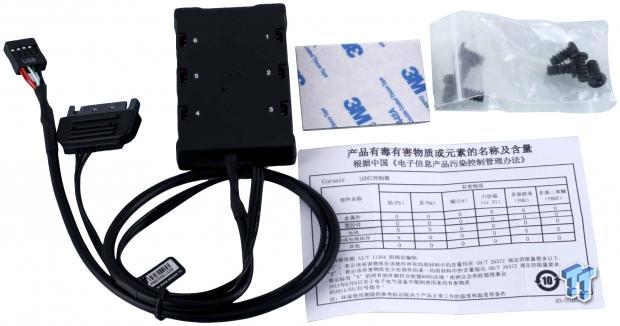 The lighting Node Core is what is at the left, with its six fan connections for RGB LED control, which is powered with the SATA connection, and talks to iCUE via the USB 2.0 connection. To the right is the 3M adhesive pad used to secure the Node to the chassis, and two bags of four fan screws. 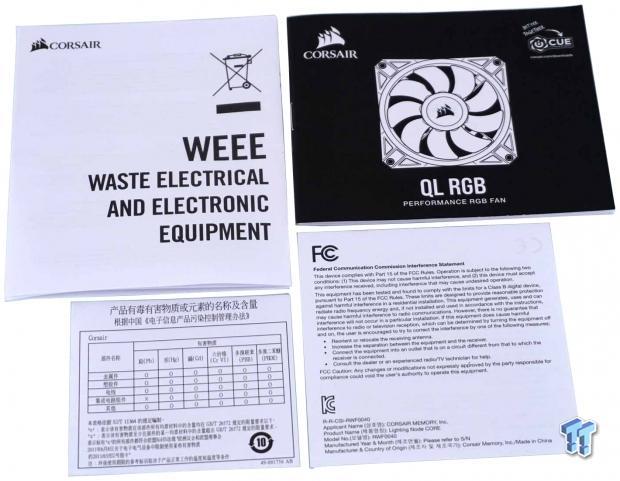 All of the literature we found in the QL120 kit is also in the QL140 kit. There is the disposal information, the manual that covers all aspects of parts, installation, connectivity, and where to obtain iCUE, and we also have more literature on lead, we think, and that the Node complies with FCC regulations. 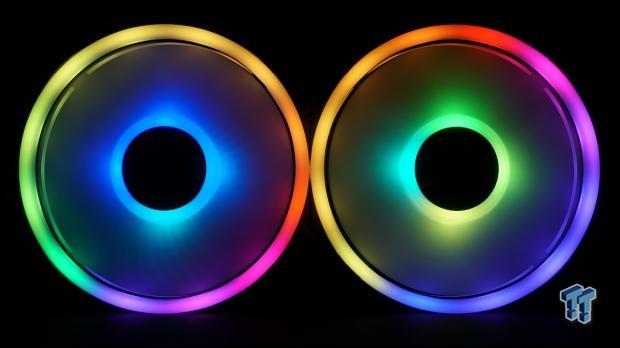 When the fans are connected properly, the payoff is enormous and paid in the form of RGB LED intensity and a rainbow of colors. As we mentioned, iCUE comes into play here, where the software will let you customize these fans and their thirty-four RGB LEDs in almost any way imaginable. There are no camera or editing software tricks at play here. In a dark room, this is what the QL140 fans will look like!

Two things became apparent when we got into the testing of the fans. We like the feel of the airflow from the 140mm versions with or without a fan filter in front of them. Even with a touch less static pressure, the amount of air behind the two 140mm fans seems stronger than that of all three of the QL120 fans. The second is that in PWM testing, we could barely hear them in operation, and even at full speed, they topped out at 34dB, a foot away from the fans. On top of the improvements we felt with the QL140s, you still have sixty-eight RGB LEDs at your disposal, and in combination with iCUE, all aspects of the lighting can be addressed, whether its intensity, colors, pre-set modes, or custom settings, whatever you are feeling like, you can make these fans do it.

It is hard to keep on going about the same things we loved about the QL120 RGB fan kit, but Corsair is at the top of their game with fans, and it has to be said! The intensity and display of RGB LEDs are like no other company we have tested. For those looking for the best and brightest in the industry, look to Corsair! The QL140 Dual Fan kit may not be for everyone, but for those with requirements for 140mm fans, where the QL120s won't work, you can have your cake and eat it too! Even though the fans are larger, containing the same amount of LEDs, there isn't any sort of gaps in the lighting display, as there are plenty to go around both rings and the fan hub. With so many LEDs in play and how the frames are designed, whether they are push or pull, installed in the top of, or the front of a chassis, or strapped to a CPU or GPU cooler, the brilliant display of RGB illumination can be seen from all angles!

At $119.99, it does seem steep for a pair of 140mm fans, but you get so much more than that! Indeed, the kit is based on a couple of fans, but the inclusion of the hub is a massive part of that cost. Basing the opinion on RGB hubs that Corsair does sell individually, we feel the Lighting Node CORE is worth at least $50 of the price! $35 a fan is still a bit expensive, but they are the best thing to hit RGB LED fans in quite some time! Even with the premium cost associated with the iCUE QL140 RGB PWM dual fan kit with Lighting Node CORE is well worth the investment to us. You could find more affordable solutions with fewer features, but if you want to light up the chassis with a rainbow of options, why not opt for the best thing going right now?

At this time, Corsair cornered the market on RGB PWM fans with the iCUE QL Series, and even if you have to wait to save up the cash, you will see that the wait was worth the effort! 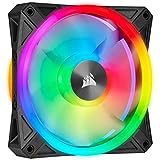 Corsair's QL series of RGB LED fans is where its at for the best display of illumination in a fan on the market! The QL140 RGB PWM fans with Lighting Node CORE is silent, brilliant to look at, and flood the chassis with air and a full array of colors!