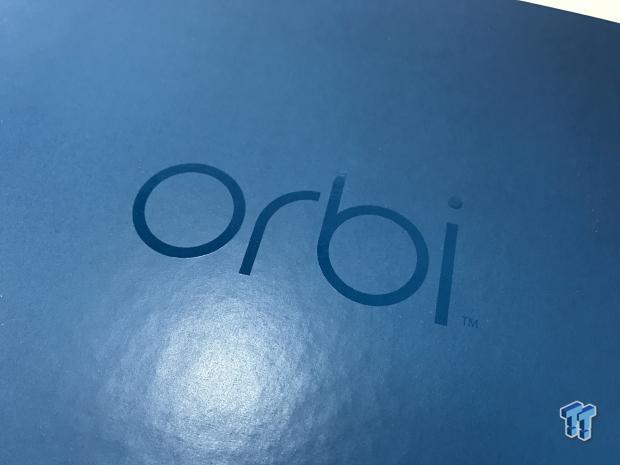 The router market has started to trend towards multiple base station units. I reviewed the Ubiquiti Amplifi HD as my first taste of this technology, and since then Netgear has sent over the Orbi, and Amped Wireless just sent the Ally Plus over so we have a good bit of testing to look forward to. Each of these systems are going to be different as each vendor has a different idea of this technology. At this point, there are only a few with true mesh networking - Luma, Eero, Google, and Ubiquiti. Netgear has chosen the same route as Amped Wireless with two base stations (a router and an extender).

Diving into the product in hand, the Orbi takes a unique approach in that Netgear is using a 5GHz wireless connection to pair the router and satellite together. In fact, this connection utilizes a higher 5GHz AC1733 Quad-Stream to ensure the satellites have the appropriate bandwidth required. With that, both the satellites and router are essentially AC1200 devices. They have 400 Mbps capabilities on the 2.4GHz band and 866 Mbps on the 5GHz band. 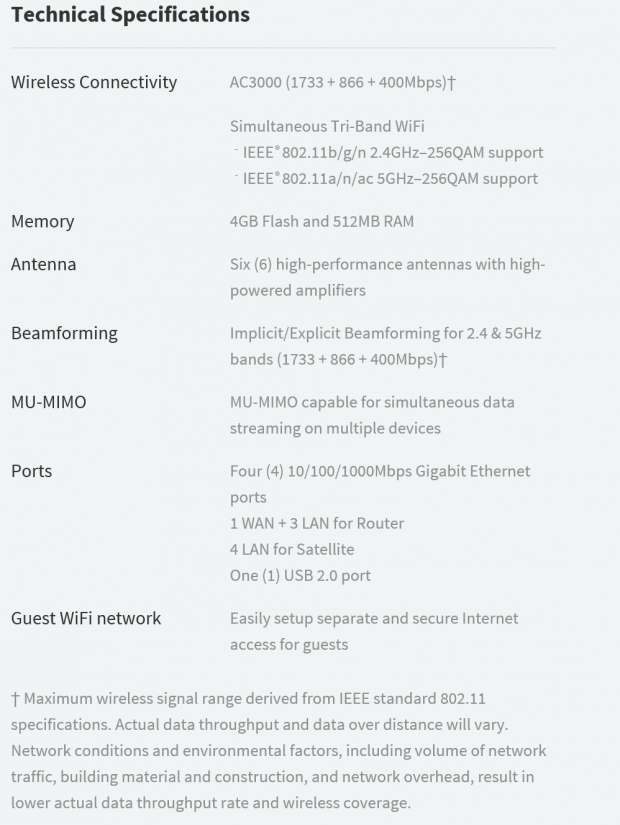 As you can see with the spec sheet above, Netgear has gotten a little creative in marketing this solution as AC3000 - of course, bigger is always better, right? At its heart, we have 4GB of flash and 512MB of memory coupled with six antennas, four Gigabit Ethernet ports, and one USB 2.0 port. This device does support both implicit and explicit beamforming and MU-MIMO.

The MSRP of the Netgear Orbi comes in at $379.99 with a one-year warranty. 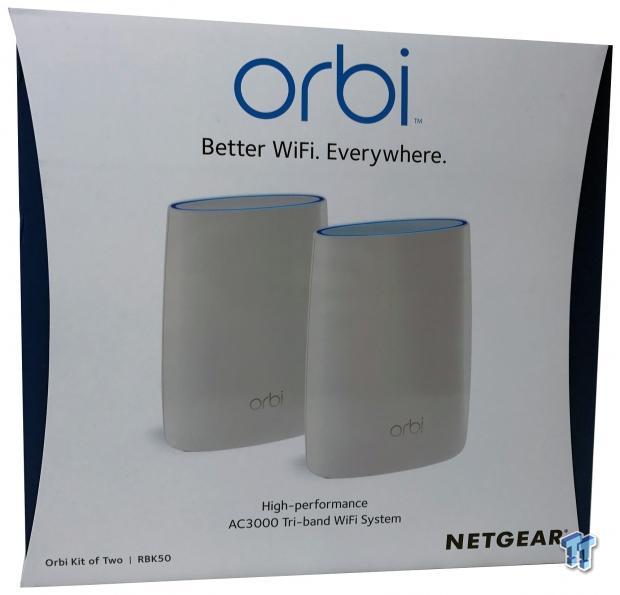 The product packaging carries the standard vibrant Netgear coloring scheme with an image of the router centered. 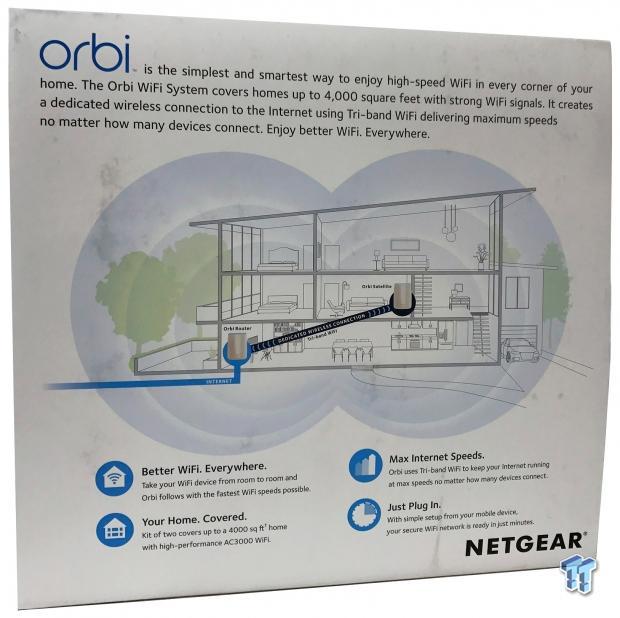 The rear goes into further detail about some of the features of this solution. 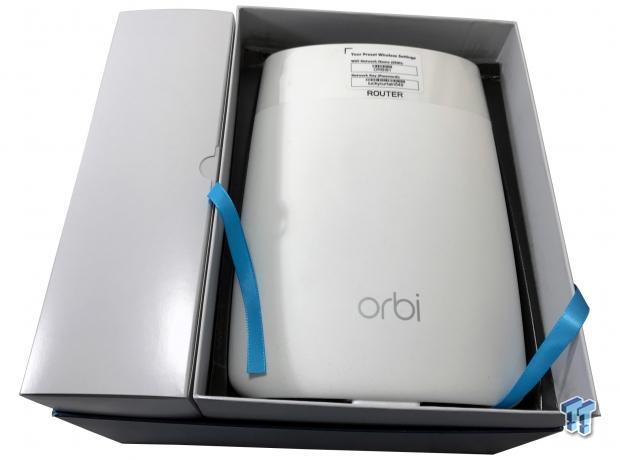 Internally, everything is packed together very orderly. The router sits on top exposed once you open the box while the satellite and cables sit underneath. 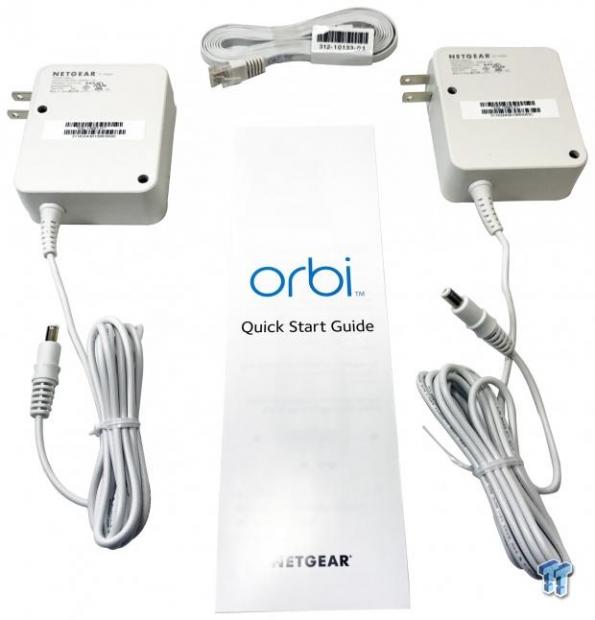 With this being a two-device kit, we have two power adapters and an Ethernet cable adding to the scope of delivery. 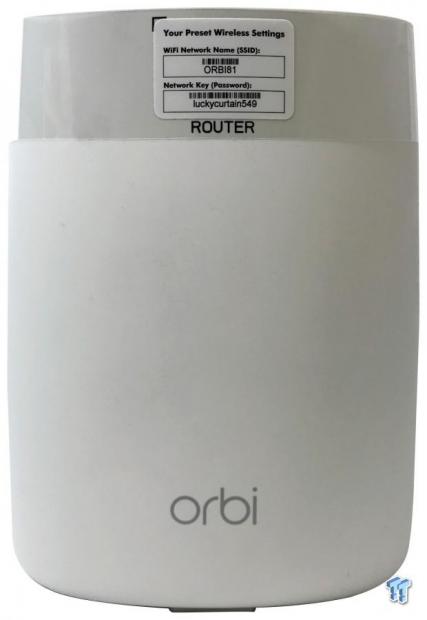 The Orbi is quite easily the largest setup as far as "mesh" or Wi-Fi "systems" are concerned. Looking at these devices online, one would think they are small with nothing next to them for comparison. The Orbi is about as tall as a bathroom trash can or two 120mm fans stacked vertically. Netgear has done great with the aesthetic of these devices; the bottom is a soft white plastic while the top is a glossy gray color with a blue led ring. 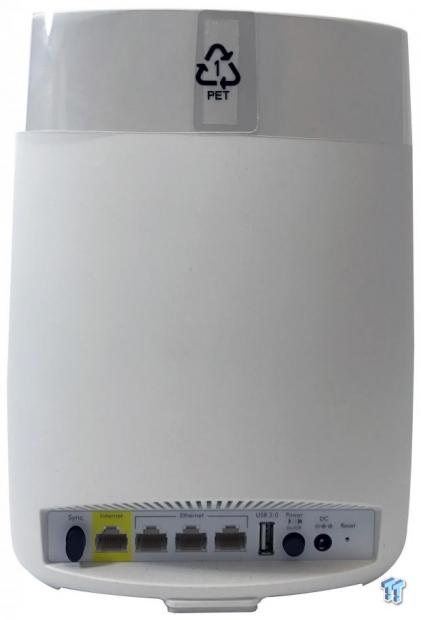 All of the antennas for Orbi are internal giving a smooth appearance. On the back, you will find a WAN port in yellow and three LAN ports. The router features a USB 2.0 port as well as a sync button to the far left. 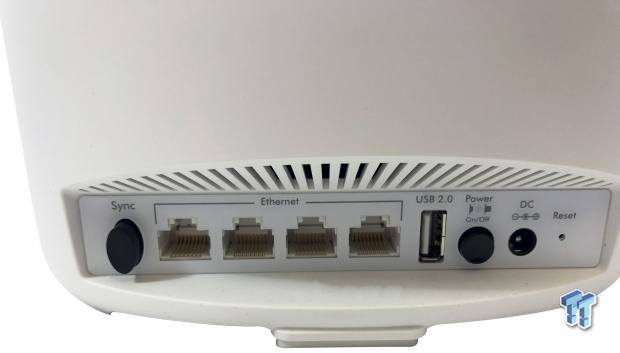 The satellite is identical in appearance but has a different I/O panel sticker. This time we have the sync button to the left followed by four LAN ports and a USB 2.0 port. 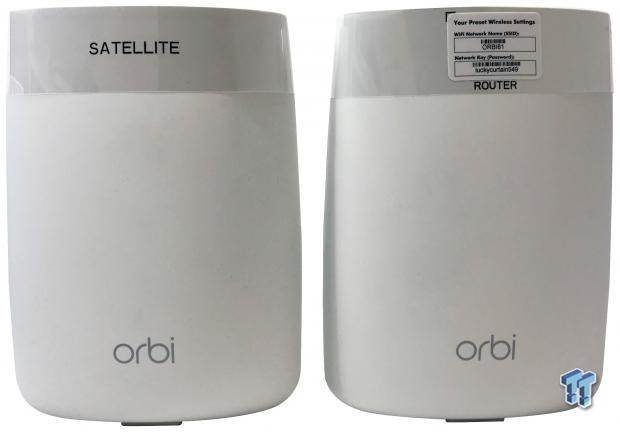 Above, we have both devices together. Orbi setup starts with the screen seen above and takes you through setting up the internet connection and satellites you have connected. 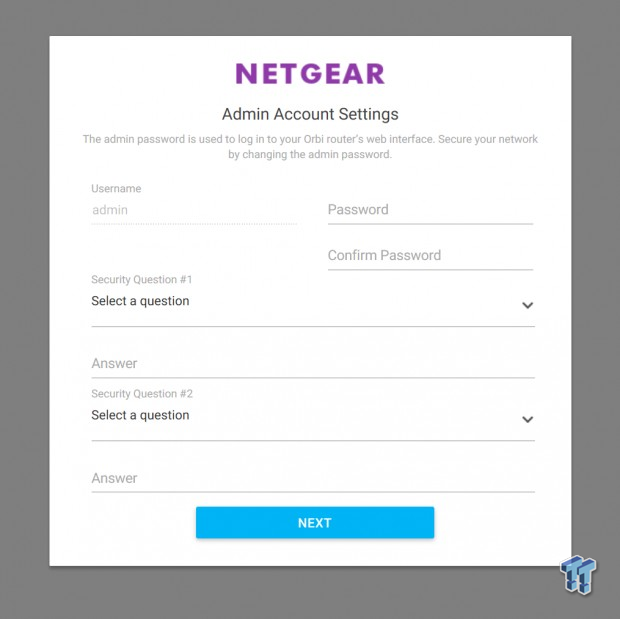 Once you get through the initial setup of Orbi, you can configure admin accounts followed by Wi-Fi. 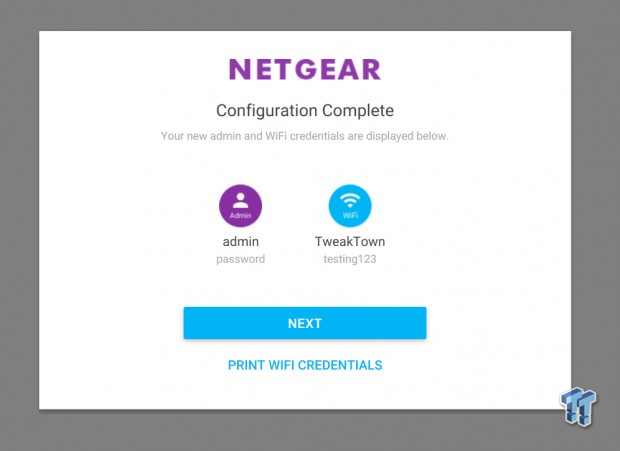 You will receive a confirmation, seen above, once you have finished all steps.

Once we completed initial setup, we were greeted with a firmware update. Version 1.3.0.12 was used for all testing. 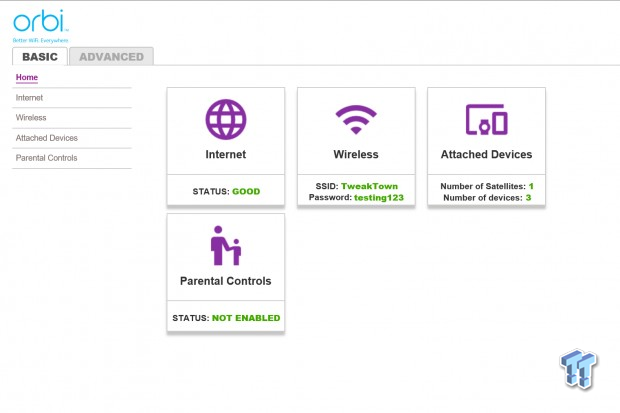 Orbi uses a simplified setup menu seen above. The dashboard gives you a glance at the number of devices connected along with the Wi-Fi SSID and password.

Going through the menus, we have the internet menu first that allows you to configure the router with your ISP settings.

Wireless for the Orbi uses band steering to choose channels for your devices. 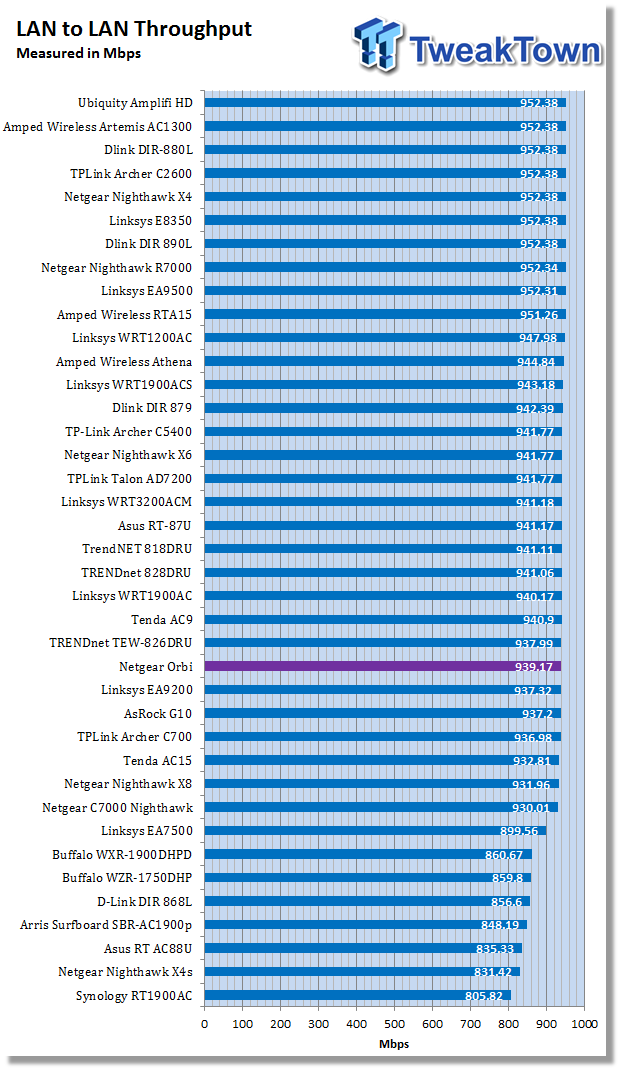 LAN throughput came in at 939.17 Mbps, comparable to most solutions tested. 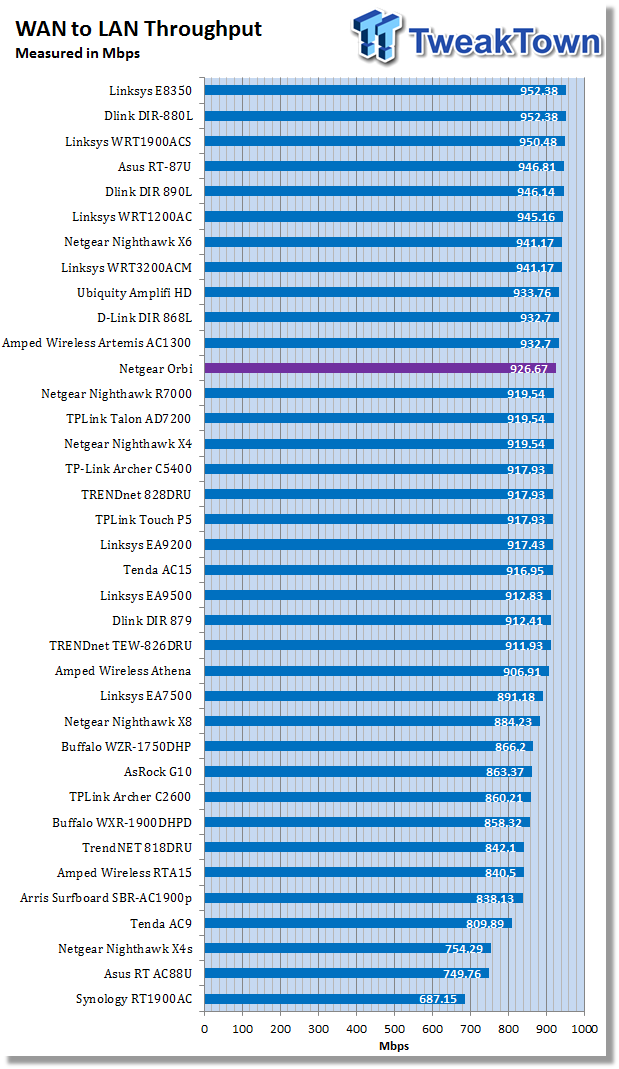 WAN throughput was rather good at 926 Mbps, near the top of the charts. 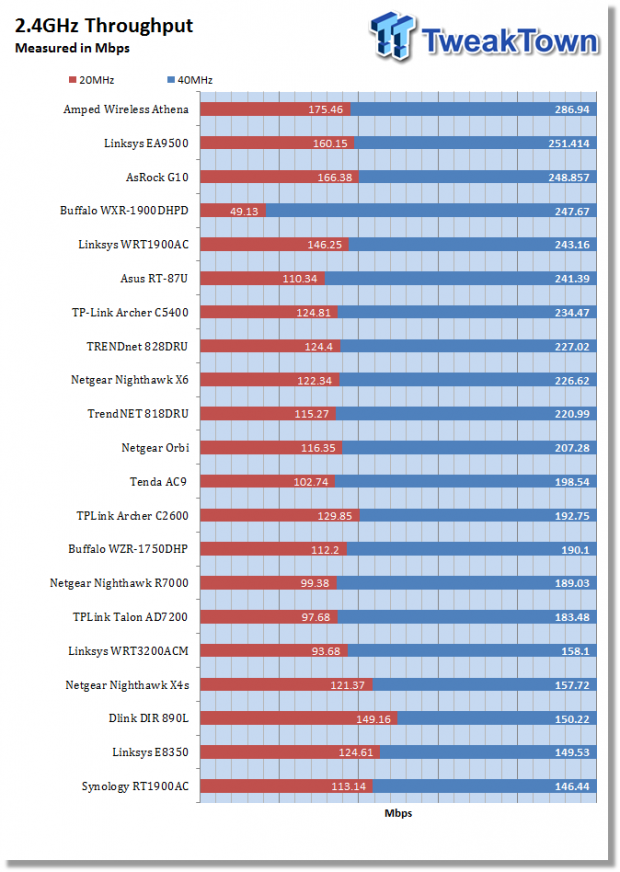 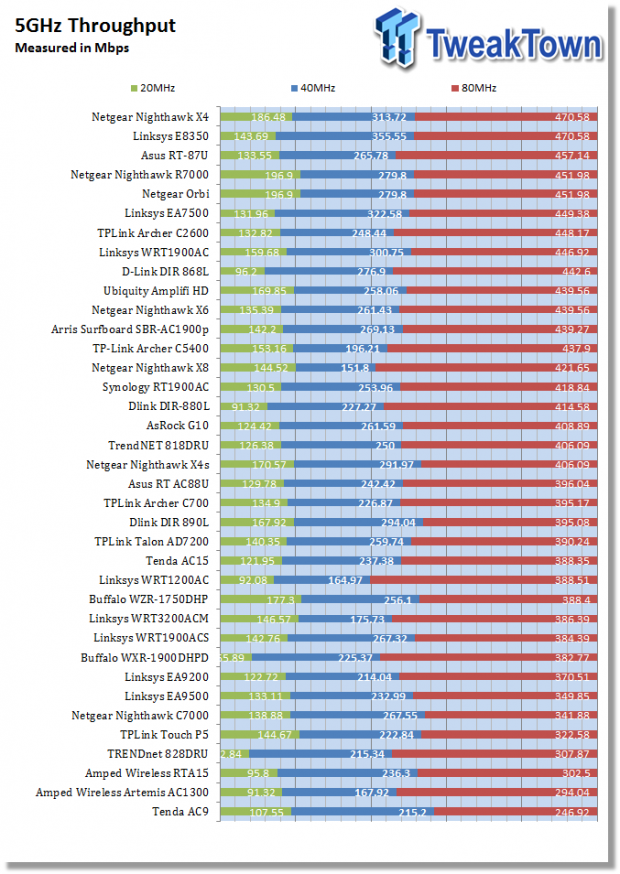 When I tested the Amplifi HD a few months back, that was the first real platform that was able to cover every corner of my home with beautiful Wi-Fi signal. For years, I cobbled routers and extender together but didn't quite get the same signal quality as I did from the Ubiquiti.

Netgear's Orbi was able to accomplish coverage in all corners of my home with two base units with the added bonus of the LED on the top of the unit guiding me in its placement. Blue is where you want to be with amber and magenta guiding you there. Sure, these units aren't small by any means, so you will need to plan for their placement, but the aesthetic of each unit does aid in blending into your home.

With the device not having a proper USB 3.0 port for storage, the review gets cut a little short as it wouldn't be fair to test USB 2.0 storage against the rest of the market running 3.0. With that said, let's get into my final thoughts of the Netgear Orbi.

Netgear's entry into the multi-point "Mesh" Wi-Fi market is a well-built product that performs well above its rating. However, I'm not a fan of marketing that pushed this device as AC3000 when in fact it is only AC1200. With that out of the way, I was very much pleased with the build quality of both the router and satellite in this kit. The soft white plastic mates well with the glossy gray and the blue ring LED gives it an elegant look.

The performance showed this solution standing tall with higher rated solutions reaching 939 Mbps over wired Ethernet. Wireless performance was rather decent as well reaching 207 Mbps on the 2.4GHz band and 451 Mbps on the 5GHz band.

Orbi is a unique platform with its AC1733 backhaul connecting the satellites to the base. I like Netgear has started you out with a two-device kit allowing you to expand as needed with each of the Orbi satellites sharing the exact hardware layout with the base. The WebGUI is very easy to navigate but does have some shortcomings as far as advanced features are concerned. After my testing, Netgear did release firmware updates for guest networks, but we still have no QoS as far as I know.

Overall, Orbi is a solid piece of kit, and if you are in the market for a Wi-Fi System, it's certainly worth a look.

The Bottom Line: NETGEAR's Orbi kit is one of the strongest wireless systems on the market thanks to its engineering, but with that comes a hefty price tag that will scare some away.