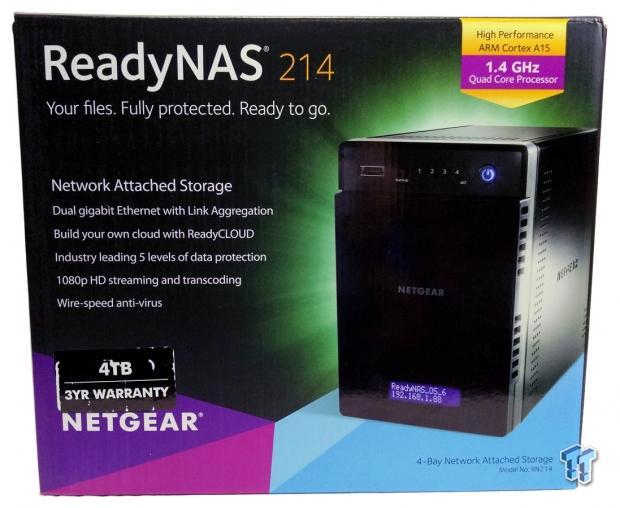 As many vendors have raced to compete by turning their NAS appliances into full media machines, Netgear has never really fallen into that. Instead, they have focused on building solutions that offer solid file performance at a low cost.

The RN214 is the latest four-bay solution to come from Netgear, and this appliance comes in several capacities. Of course, things start with a diskless unit with added options of 8TB with four 2TB drives and a larger option of 12TB with four 3TB drives. As I mentioned briefly above, Netgear has never really fallen into the media center idea, but they do support transcoding and streaming via Plex and other applications. In fact, this ReadyNAS 214 supports real-time 1080p transcoding. On the file side of things, Netgear has several pieces of software that compliment this appliance enabling you to backup and maintain your data. 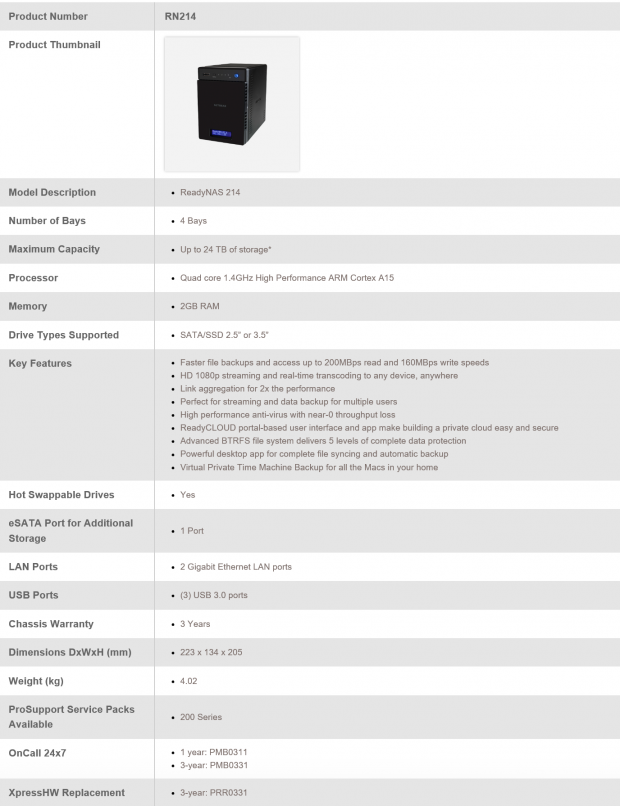 Getting on with the specifications of this appliance, the ReadyNAS 214 is a four-bay appliance supporting up to 24TB of capacity. It features a quad-core ARM Cortex A15 operating at 1.4GHz paired with 2GB of DDR3 and for connectivity one eSATA port, three USB 3.0 ports, and dual Gigabit LAN.

MSRP of the Netgear ReadyNAS 214 in its diskless form comes in at $499.99 with a three-year warranty.

Our unit was sent over with four 1TB drives, but the packaging stays the same across all capacities. On the front, we have an image of the device to the right while several features are listed to the left. 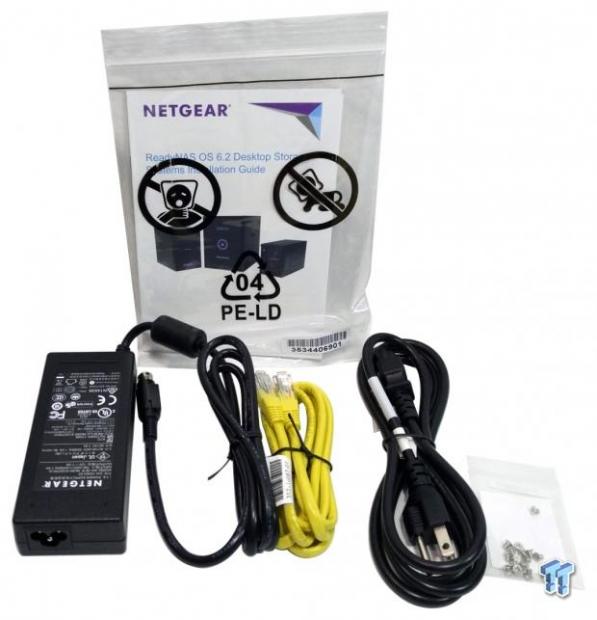 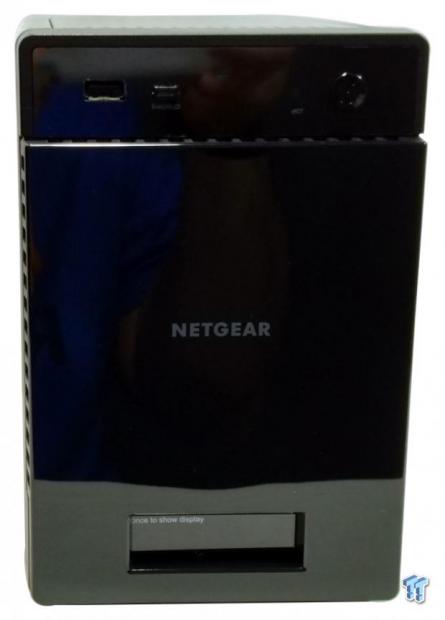 The front of the unit is quite glossy as noted by my reflection in the image above. We do have a small LCD screen at the bottom and power, USB and the backup button up top. 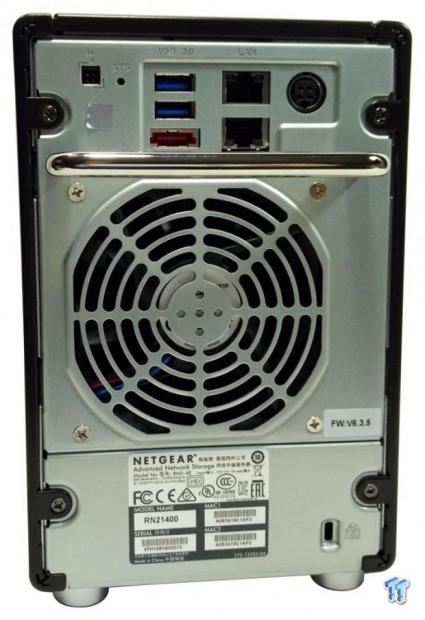 The back of the NAS houses both of the dual gigabit LAN ports and two more USB 3.0. Just below that we have the eSATA port and the cooling fan.

As I mentioned this appliance came loaded with 1TB drives. The trays are tool-less. 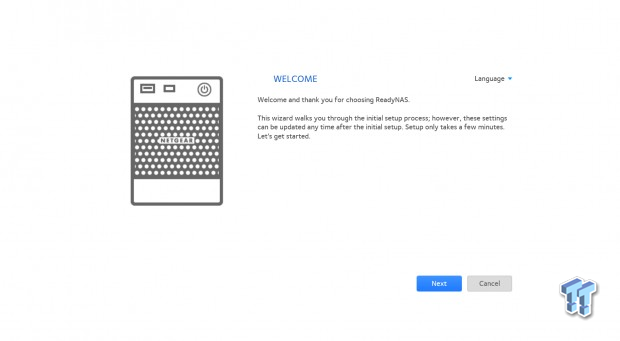 The ReadyNAS guides you through the setup with a simple wizard. 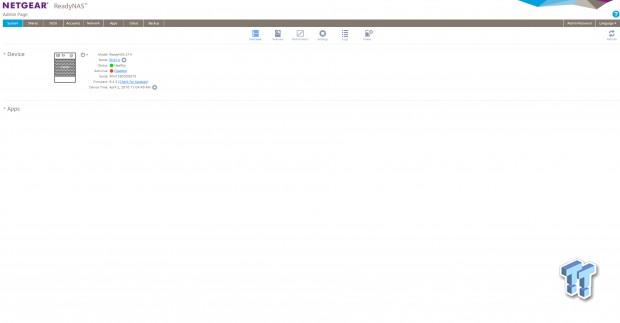 Once you make it through the initial setup, you will land here where you get a quick overview of the NAS. 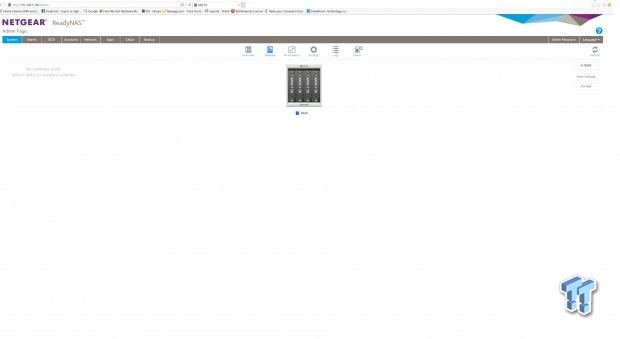 Netgear uses a flexible RAID system by default; you can choose to disable this and use legacy RAID options. 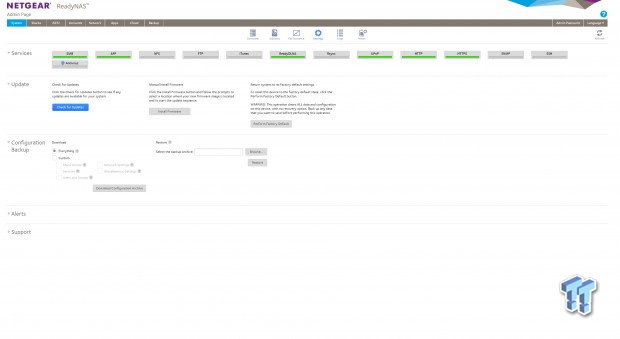 The services tab shows you everything that is enabled on the NAS. As you can see above, we are using SMB and AFP along with having the media server enabled. 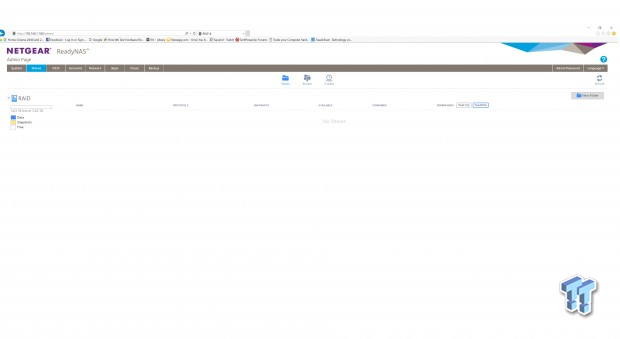 Moving on, we have a quick look at the shares menu. This is a Web GUI method of managing users along with your data. 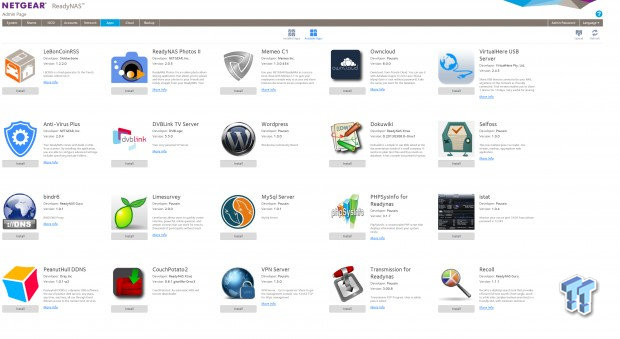 Netgear surprised me by having so many applications ready to go with this appliance, including Plex, Transmission, and Anti-Virus support. 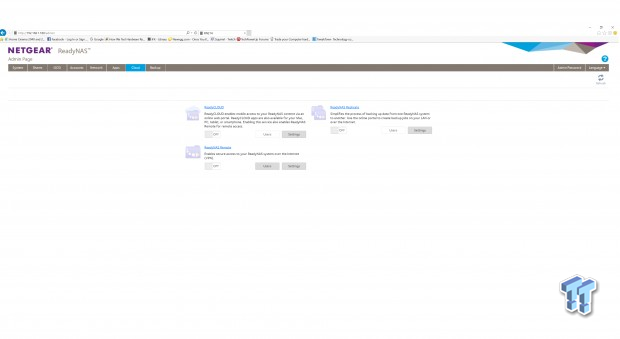 The ReadyCloud software if you choose to enable it will allow you to back up your mobile devices along with your PC and Mac devices. 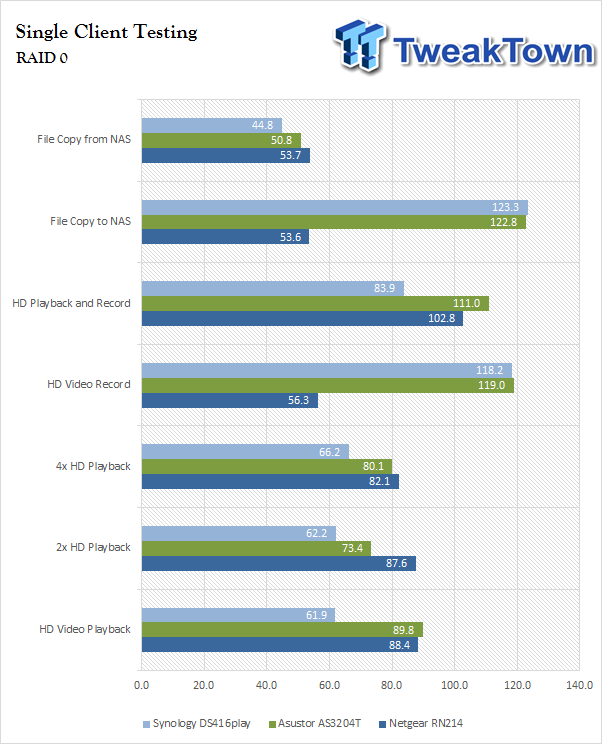 Getting right into the performance of the RN214, I found RAID 0 to do quite well. Playback testing was rather consistent around 88 MB/s while file copy to and from the NAS too hovered around 53 MB/s. 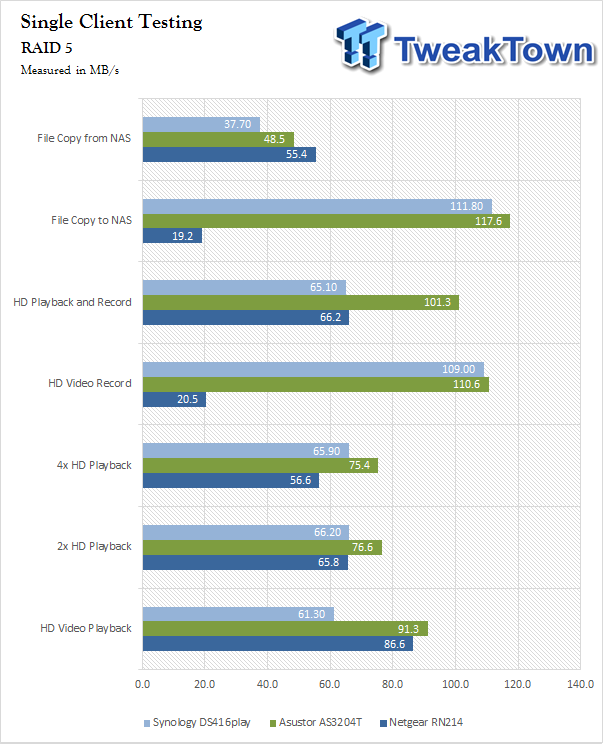 RAID 5 did well with a single playback stream and when adding in more performance started to drop slightly from 86 MB/s to 65 MB/s. 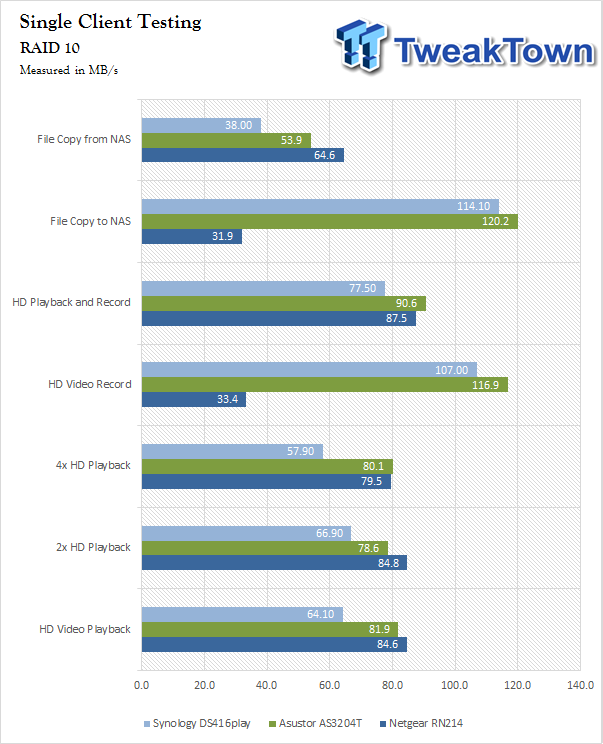 Next, we moved over to RAID 10 and performance here was equal to what we found with RAID 0. 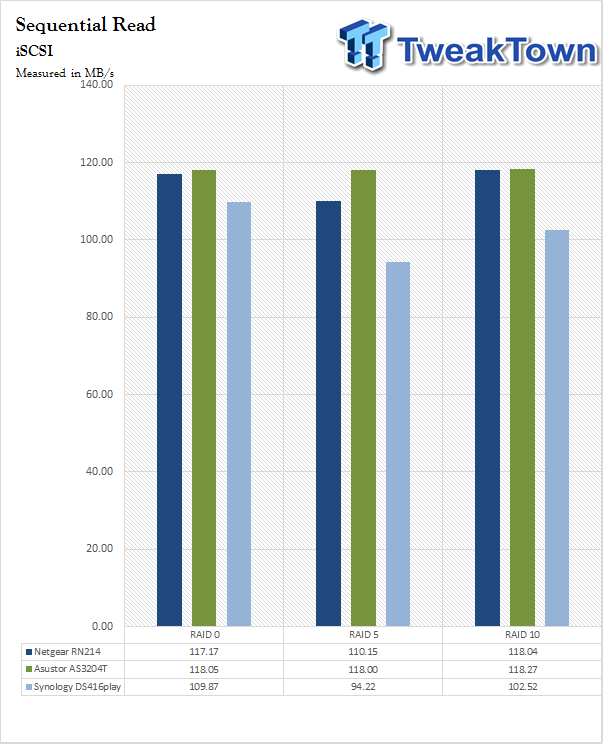 Sequential read performance allowed the RN214 to compete and even outperform the latest appliances on the market. RAID 0 came in at 117 MB/s while RAID 5 touched 110 MB/s. 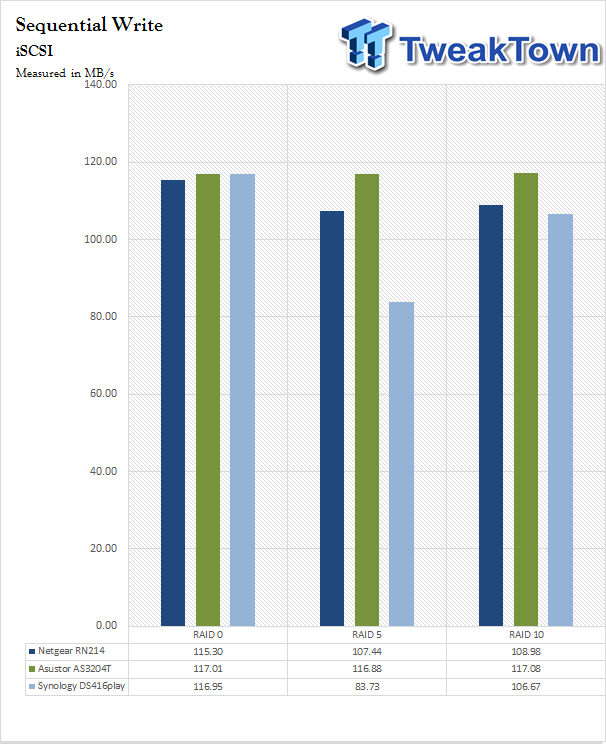 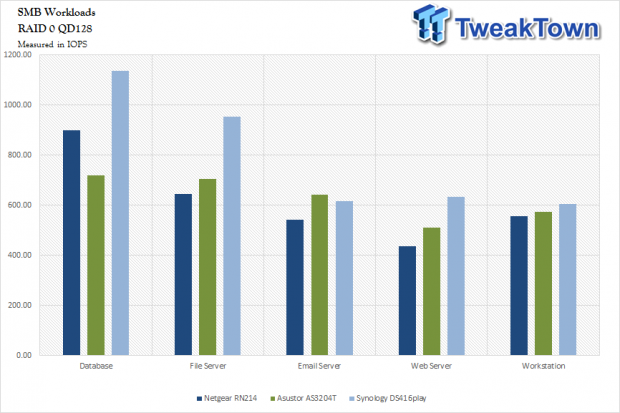 SMB workloads were a bit harder for the RN214. Database proved to be the best situation reaching close to 900 IOPS while the others were quite consistent between 400 and 600 IOPS. 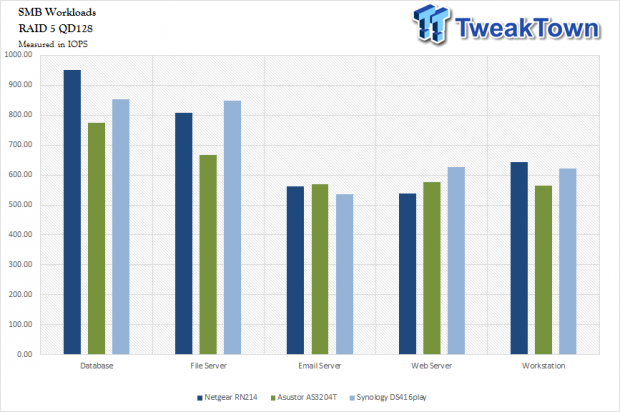 Over to RAID 5 performance did tick up a notch as we have 950 IOPS in Database followed by 800 IOPS in File Server. The last three tests all stuck around 600 IOPS. 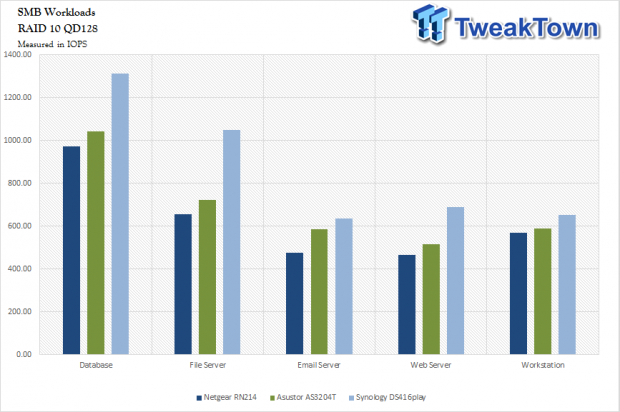 In our last test with RAID 10, Database was once again the top performer very near to 1000 IOPS. This was followed by 625 IOPS in File Server and a pretty consistent 500 IOPS with the last three tests.

To test the power consumption of the NAS appliance, I deploy a rather simple Kill-A-Watt device between the receptacle and NAS. I then monitor the power usage of several minutes in each stage to get an idea where the NAS lands. 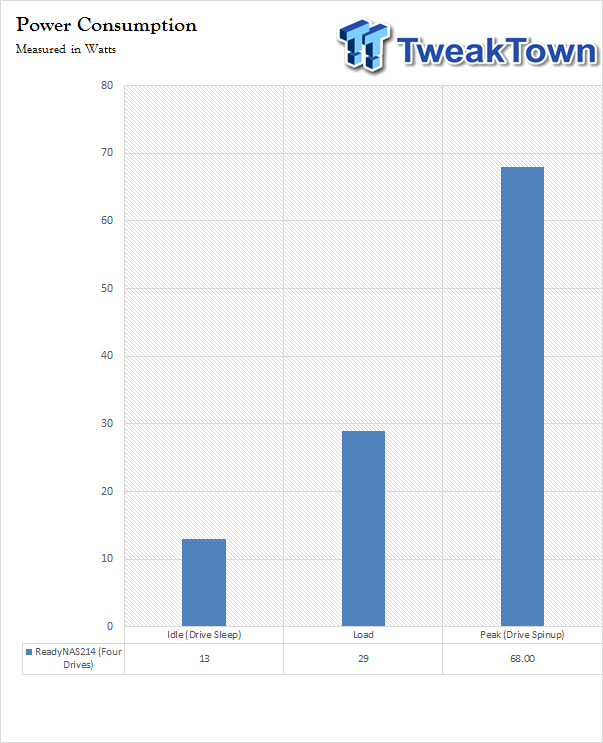 The ReadyNAS with its ARM platform did quite well using just 13 watts at idle while under testing this unit averaged 29 watts with four 1TB drives. Peak power consumption was seen during drive spin up at 68 watts.

These ReadyNAS units always throw me off my game when I consistently see the latest Intel platforms roll through on QNAP, Synology and ASUSTOR appliances. When I see a NAS using an ARM Cortex A15, I just immediately think it's going to be slow or won't be able to handle the workloads. Somehow now and in the past, Netgear seems to get these appliances dialed in to provide solid file performance on a consistent basis. This adds to the excellent build quality of these units as every device that I have ever tested is a tank in its own right.

With pure file performance, the ReadyNAS did quite well, especially in sequential where this device touched 118 MB/s in RAID 0 and RAID 10 while RAID 5 wasn't far behind at 110 MB/s. Single Client testing didn't paint the best picture for the RN214, but it was able to handle multiple streams in RAID 0 and RAID 10. In workloads, this NAS did amazingly well with the Database workload getting close to 1000 IOPS in every RAID mode.

As a bonus, Netgear does have a rather easy to learn Web GUI. It uses a tabbed layout over the desktop feel that many vendors go with and while at first you will need to dig around to get a feel for where everything is at, it is one of the most streamlined solutions. Adding to this is Netgear's ReadyCloud software that aids in setting up backups for all of your devices including PC, Macs, and smart devices, putting all of your data in one location that is accessible all the time.

In closing, the RN214 is a rock solid NAS appliance, and while it can perform exceptionally well as a media streaming solution, it performs even better as a file server. However, at the fairly heavy MSRP of $499.99, there may be better options to consider overall for your hard-earned dollars.

The Bottom Line: While Netgear does an amazing job tuning their appliances and offers top notch software that adds to the experience, at the MSRP of $499.99, if you want something more than a file server, there are a plethora of better options on the market.