Back in October, we brought the ASRock G10 into the lab for some performance testing and to get an overall feel of ASRock launch into the wireless networking market. Along with the G10 came a small adapter tucked into the shell of the gaming router, the H2R.

The H2R was initially announced late last year a month before me receiving my sample. While my initial focus was on the G10 router, today we are going to have a look at the H2R itself. The H2R is packing a lot of technology into a small stick about the side of a Chromecast or FireTV, but what makes this solution unique is along with its abilities to moonlight as a Miracast/ Airplay device, it can also act as your router while you on a business trip or holiday.

To control the H2R while in HDMI mode, you have a choice to Airplay your content via an Apple, Android or Windows device, or you can use software called EZCast. Output resolution lists 1920x1080 as the highest option while supporting MPEG4 and H.264 formats. 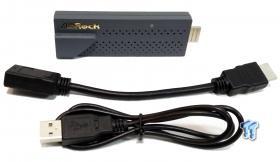 The scope of delivery includes the adapter along with a USB cable and HDMI extender.

Looking at the front of the adapter, we find ASRock branding in gold with a small LED to the right. 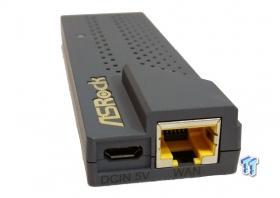 The one end of the H2R houses the USB power input and WAN connection. 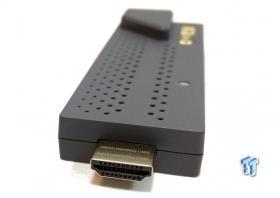 The opposite end houses just the HDMI connection.

Diving in a little deeper as I tend to do, I opened up the H2R to see what components are used. On one side, we were greeted by a Realtek RTL8192EU chipset for the wireless radio and 128MB of Winbond flash. 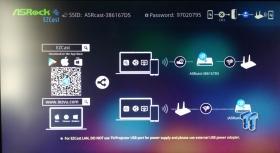 Starting things off with the testing phase, I went through the normal steps and downloaded the EZCast software. Above, we have the default display when connected via HDMI. 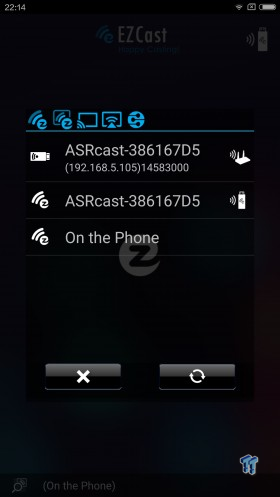 Moving on, within the EZCast software, I searched for devices. The ASRock was found as you can see above. 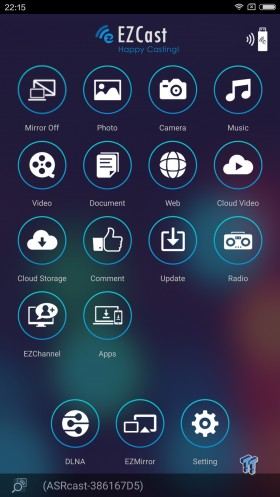 Above, we have the main menu for EZCast. From here, you can do nearly anything you want from sharing documents, video and photos along with browsing the web and listening to the radio. 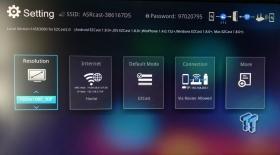 Above, I have the setting menu for the H2R. As you can see the resolution is limited to 1920x1080 at 30Hz, even when using this adapter on my 4K monitor. 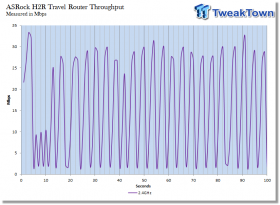 After playing with the Airplay functionality for a while, I switched my MacBook Pro over to the wireless network provided by the H2R. I then ran it through testing and came up with the odd pattern you see above. As you can see, we have peaks and valleys ranging from 30 Mbps to 3 Mbps. This had me switching devices to a Qualcomm-based smartphone and running the same test again. 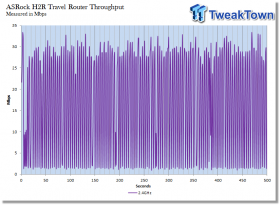 That same test with a Qualcomm device produced similar results. Although I did run the test much longer this time, we still see the same wavy pattern between 3 and 34 Mbps.

In my time with the H2R, I am pleased with the functionality I get out of it. Especially if you are one that is looking to upgrade their network and you go for the G10, the H2R is included. For those that may want to purchase this device as a standalone product, I'm not sure the "Chromecast" functionality is up to par with purpose-built solutions. Although, I did enjoy the Airplay functionality, but when I tried to "EZCast" to the device with a 4K camera on my smartphone, things did get quite chunky.

Color seems to be slightly off with the H2R as well when comparing my MacBook Pro via HDMI and over Airplay. I attribute this to the resolution which again is locked down to 30Hz. Build quality seems to be quite good. ASRock chose components that are largely used in many competing EZCast solutions, so they have been tested.

Performance, as I eluded to, was hit and miss. Airplay is great with my iPhone and iPad, but is a bit chunky with the MacBook Pro. As a travel router, this thing doesn't have the greatest performance, but it does give enough for web browsing while at the hotel, but could bog down a bit if you get too many users onboard.

Overall, I did enjoy the H2R, and while it may not be the perfect solution for all, if you need a Miracast capable HDMI device with the added benefit of being a travel router, it's a solid enough solution considering the price.

The Bottom Line: ASRock's H2R on its own is a great solution for casting content to your HDTV or projector, but adding to this is the router functionality that does an admirable job while you're out on business or holiday with the family.