Netgear's Nighthawk EX7000 is a solid solution for extending your network with an easy to setup solution. Apart from that, I wasn't impressed with the performance of the 2.4GHz band, and I do feel with the price hovering around $170 at the time of writing, it is a bit on the high-end for a solution such as this.

As I have touched on previously, 5GHz wireless, especially with the release of the 802.11ac specification, has opened the market up to an intense amount of products. One inherent feature of 5GHz wireless is its lack of range, and I too have spoken about that in many reviews. With that said, for those of you that are trying to build a network to cover a large space, this often requires the use of a range extender to get the full speed of 802.11ac in every corner.

Just like the wireless router market, range extenders come in varying flavors from AC600 all the way up to AC1900 and higher. The Nighthawk EX7000 in the lab today is the bigger brother to the EX6200 I reviewed over a year ago. This time around Netgear has packed AC1900 technology into their extender giving you 600 Mbps on the 2.4GHz band and 1300 Mbps on the 5GHz band. Going into more detail on the hardware side, this extender operates with a dual-core 1GHz processor at its heart while the wireless radios use a 700mW high power design for increased range.

MSRP of the Netgear Nighthawk EX7000 Range Extender is set at $169.99 and comes with a one-year warranty. 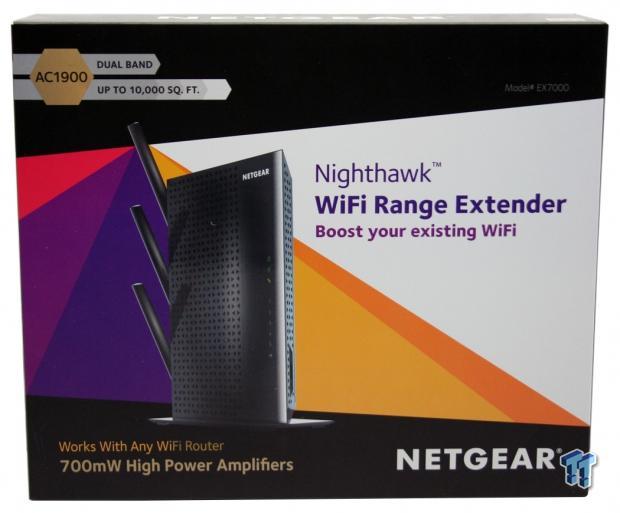 Starting things off with product packaging, the EX7000 enjoys similar box art to the rest of the Nighthawk series. At the top left, we have its AC1900 designation while the bottom has marketing information. 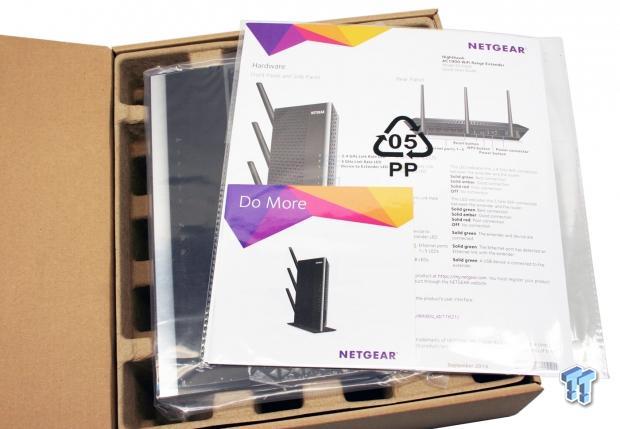 Opening the box, I was greeted with reading materials while the extender was packed securely underneath. 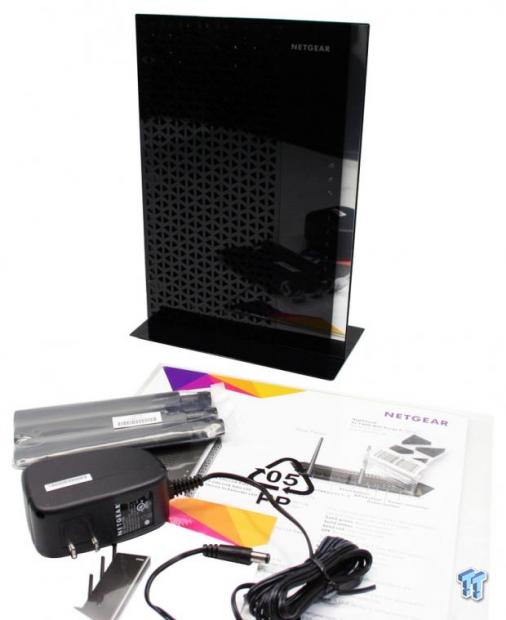 Above, we have the scope of delivery for the EX7000. This unit comes with a power adapter, three antennas, reading materials, and the extender itself.

The back of the extender houses gigabit LAN ports, along with three antenna connections. Towards the bottom, you will find the WPS button and the power switch. 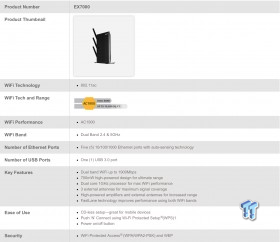 Above, we have the quick spec sheet for this extender that shows its AC1900 capability along with five Gigabit Ethernet ports and one USB 3.0 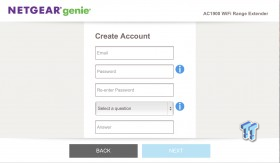 The setup process for the EX7000 is straight forward and starts out with creating an account, as seen above. 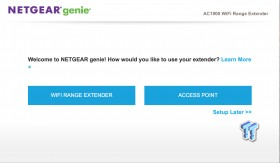 The extender then asks how you would like to use it with the available options of extender or access point. 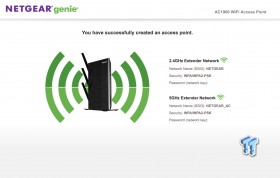 After a few minutes, the extender setup is complete, and it gives you the screen above with your setup information. 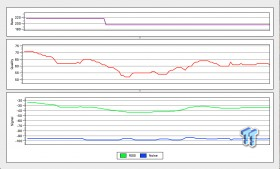 In our first test above, we are testing the range of the 2.4GHz band of the EX7000. Starting with myself standing within 5 foot of the device, I walked out to a maximum distance of forty feet. Our signal quality started out at 72db with the signal rate just under 220Mbps, as we moved out to around 15 feet that signal rate dropped just a touch under 200Mbps and at that time the quality was hovering around 60db. However, continuing to walk even further out netted no further drops in signal rate even with quality dropping to its low around 52db. 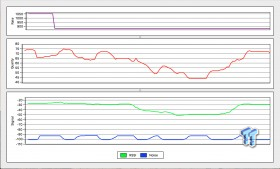 The 5GHz band went through the same testing scenario starting out with a signal rate of 1070 Mbps with quality just under 75db. Moving out to 10 foot, we met our first rate drop down to 866mbps while quality shifted between 65 and 75 dB. With the 5GHz band, we found no further rate drops even as the signal quality dropped down to 45db.

Just like wireless routers, I have had the opportunity over the last few years to check out and test quite a few extenders as well. With that said, the EX7000 for me lands somewhere in the middle. The build quality is alright, similar to the EX6200 and I do find the tower type range extenders to feel a bit tipsy. Other than that, the plastics feel solid, though solutions such as this and the EX6200 were a bit too glossy for my liking and tend to attract dust and fingerprint and even scratches easily.

The performance of the EX7000 was rather good on the 5GHz band and for me this is probably the most important aspect as most homes won't need an extended 2.4GHz network with its default range reaching upwards of 50 -75ft. With 5GHz, you rarely if ever get a decent amount of performance past around 30ft. With the EX7000 in tow, we were able to connect at a rate of 1050Mbps up to 10-15ft after which induced a drop to 866Mbps and that carried out a good 30ft adding around 900 - 1000 square feet to our wireless network.

Talking about the 2.4GHz band, I wasn't particularly impressed with the link rate hovering around 200 Mbps but the range was quite good throughout and for those times when you move outdoors, and the 5GHz band can no longer service your needs, the 2.4Ghz will certainly be there.

The setup procedure for this solution was among the easiest I have used and takes only a few minutes to have the extender up and running. Another thing of note here is I didn't find the EX7000 to be too picky on its placement. I had a few options in my home where power receptacles were placed in odd locations and even being almost 25 feet away from the base router, the EX7000 reported a good signal.

Overall, the EX7000 is a decent solution if you are looking for an easy to setup solution for extending your wireless network with AC1900 technology.

The Bottom Line: Netgear's Nighthawk EX7000 is a solid solution for extending your network with an easy to setup solution. Apart from that, I wasn't impressed with the performance of the 2.4GHz band, and I do feel with the price hovering around $170 at the time of writing, it is a bit on the high-end for a solution such as this.