The sound quality is great for the price, however, the comfort is non-existent. Maybe it would be fine for kids, but adults will experience a clamped skull.

Following its mainstream PC gamer release of the GameCom 788, Plantronics has also reached out to the console/PC hybrid audience, further touching on those looking for a wireless experience. Along comes the Plantronics GameCom P80 which consists of a GameCom 818H wireless headset bundled with an 818 USB dongle receiver. 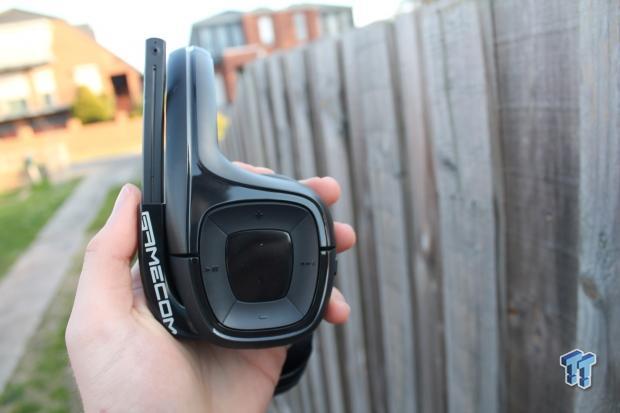 Packed with useful features as seen on other Plantronics headset models, can this product shake the old clamping issue as seen with the 777 and 377 models, while providing adequate sound for general applications? This entry-level headset has a bit to prove, but I'm a little impressed straight off the bat given the inside of the top flap reads 'GLHF' - well played Plantronics, well played. 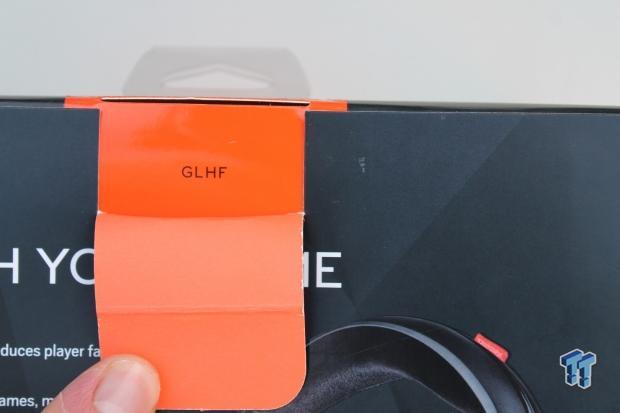 Bragging a reliable audio transmit distance of up to 40 ft, the GameCom P80 further offers 10 hours of wireless gameplay after four hours of total charge time. 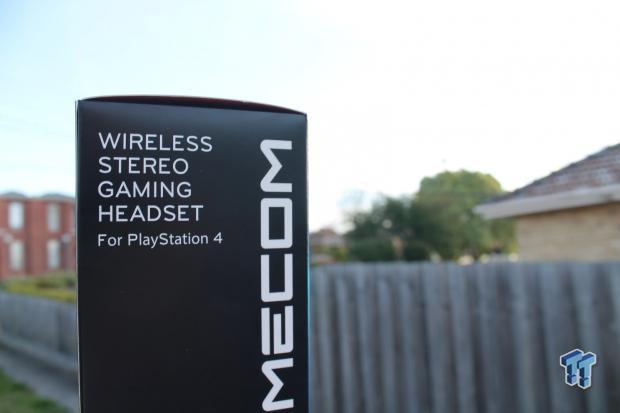 This lightweight headset incorporates a noise-cancelling microphone which mutes when the boom is raised and further offers a frequency response of 100Hz - 10kHz. The 40mm drivers in each ear produce a stereo 2.0 sound and offer a frequency response of 20Hz - 20kHz. Unfortunately no more technical specs are available online or in the user manuals. 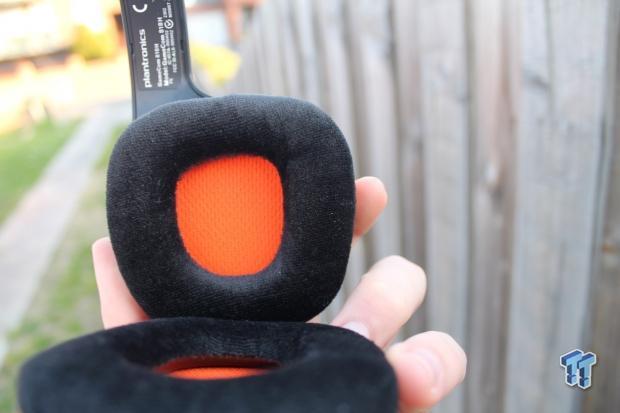 Supporting PC, Mac, or PS4, this headset offers a bunch of controls on the side of the headset (in lieu of an in-line controller) and includes the basics such as volume controls, power buttons, and more. Just in case you're wondering if the headset is on or not, there's also an included LED. As for more charging information, expect a four hour charge to gather 10 hours of use, a two hour charging time to earn you eight hours of game time, and a short one hour charge will get you two hours play time in total.

Selling to the public at an entry-level price point of $79.99 direct from the Plantronics store, this headset is certainly an affordable wireless option. This, however, causes concern for sound quality as $80 headsets (wired) can certainly perform poorly, added to this is wireless support in the P80. I hope the sound quality doesn't suffer as a result of cost cutting measures.

The package is fairly simple. Inside the box, you get the headset itself, the small USB dongle in order for the connection to work, and a mini-USB charging cable. It's a little disappointing that this headset doesn't utilize a micro-USB charging option as most users will already have these types of cables set up for phones or tablets. The charging cable is of adequate length though, which is more than I can say for most other headsets and Bluetooth speakers. 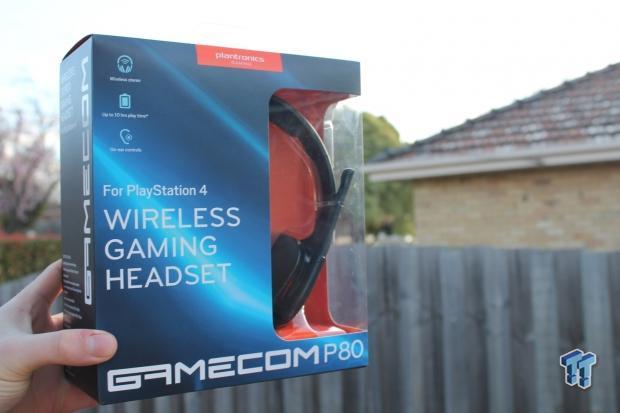 It's almost mandatory in my eyes that peripherals of today come with a carry pouch. There's nothing more handy than being able to easily store your precious gaming weapons when travelling to a LAN party, attending a gaming event, or simply visiting a friend's house. This headset unfortunately does not come with one. The headset utilizes cloth ear cups and a cloth head band, likely a cost saving measure which could help explain why this wireless product is priced the way it is. 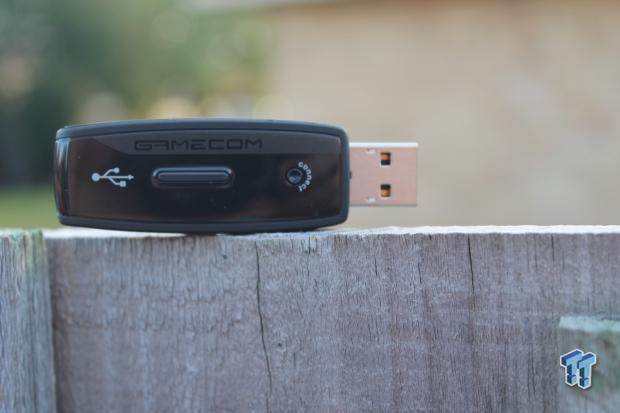 The included USB dongle has a handy blue LED to let you know about the connection status. It isn't too bright and won't annoy you while gaming in the dark. It connected to my computer and the drivers auto-downloaded, meaning all I had to do was plug it in and wait a little. There was no fiddling required.

Looking at this headset, I was a little worried about how comfortable it would be. Obviously Plantronics has tried to keep the cost and weight down with these as it's a common thing to do among console-targeted headsets and even with a battery located within, it's light on your head. 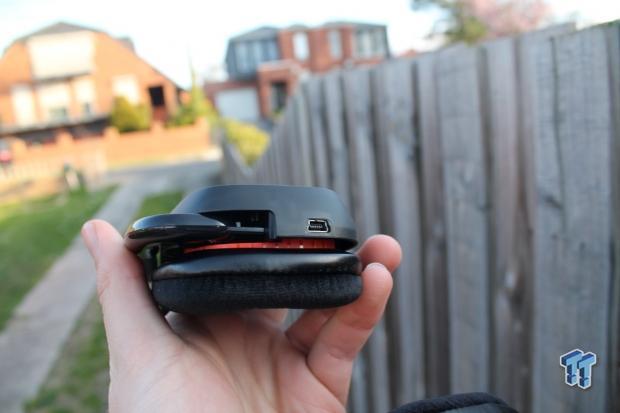 However, my concerns with comfort were proven real the minute I put on the headset. The cloth ear cups are quite solid and the headset grapples to your head like its Jack and you're stranded in the ocean thanks to a sinking Titanic. The squeeze with added hard cloth pads ensured my temples were hurting after only 20 minutes of use; an obvious downfall of this promising headset. I have a slightly larger than normal head and small ears, so it could be just me, but I couldn't stand to wear these for more than 45 minutes. The microphone auto-muting when swivelled up is a great addition and something that you see in many Plantronics headsets. What's even better is there is a little noise played in your ear every time it mutes and unmutes, making it harder for you to not realize why no one can hear you screaming at them in Skype. 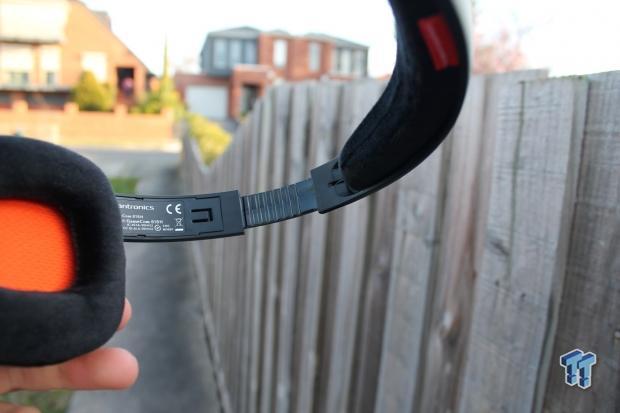 With a slightly larger (or adjustable design) and leather ear cups, even if it meant a small price hike, I think this headset would be much more usable. All of the on-ear controls work fine with my PC pumping Spotify. However, it's still a little annoying to use as with all on-headset controls. You can't see it, so unless you're used to headsets like this, a lot of fumbling and wrong presses can be quite frustrating.

Currently my game of choice, Dota 2, is great for gamers from competitive to casual. I'm currently going through a process of hitting the random button in all pick mode, meaning I can test the headset across many different soundscapes, ranging from booming ultimate abilities like Gyrocopter's bombs or the shrill shriek of Queen of Pain's 'Sonic Wave'. 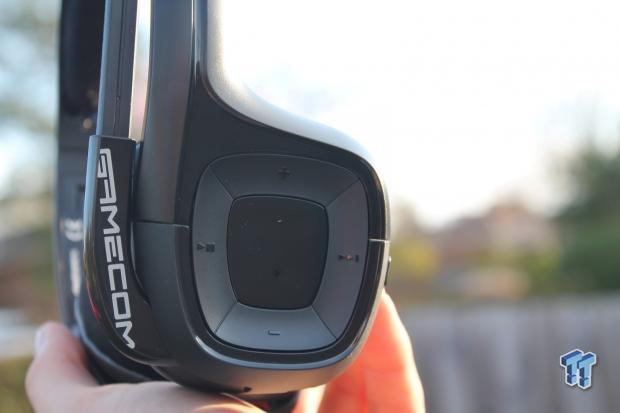 There's no issue of my ears getting too hot thanks to the lightweight and on-ear design, but the comfort is still a major issue after a single game, and that's a shame as the sound quality is great. The mid-range is full and the bass is better than many $100+ headsets I have tested so far. The open-ear design means that it's a little different when playing next to my girlfriend and I feel like it also ensures you can't become fully immersed in the gaming experience. All of this aside, the sound quality certainly surprised me; if only the comfort would match!

Game on, tunes on

Moving along to a cool old school tunes of Hotline Miami, a similar experience was had. This helps show the headset provides a well-rounded experience and will be perfectly suitable for a gamer looking to dabble in music, movies, FPS and League of Legends alike. The headset is marketed towards PS4, PC and Mac users and I can be positive in saying that this headset could suit all applications easily. 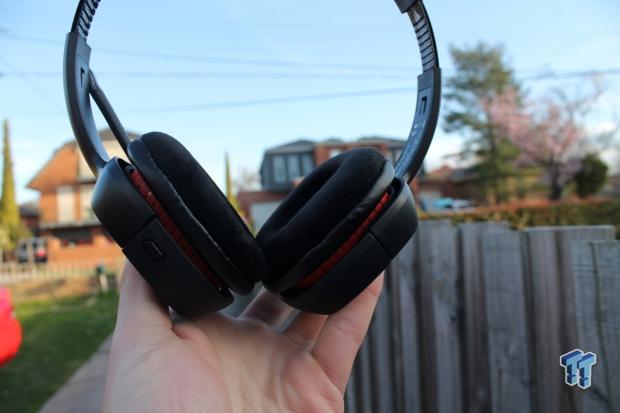 Moving onto a little more music, the clarity, full mid-range, and bass are once again apparent. I've been on a spree of old-school 80s rap currently and each bass hit, backbeat drop, and female backup singer high-note resonates clearly. This $80 headset matches the HyperX Cloud as a comparison, something that is similarly-priced, but wired. 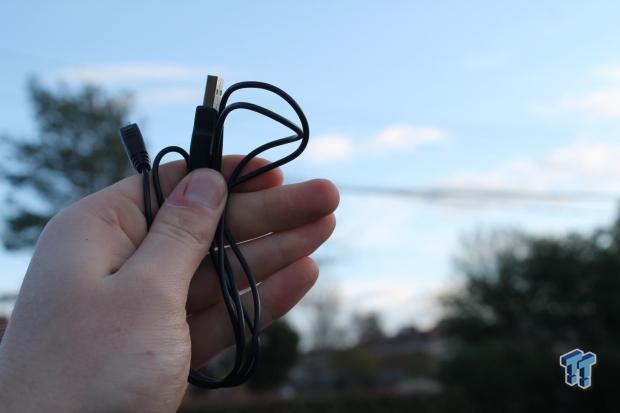 Full mid-range: Something that's quite hard to explain to people who haven't experienced this before, but a full mid-range ensures an overall positive sound experience.

The price: As mentioned a few times previously, for $80, this wireless headset provides better sound than most $100 wired products.

The comfort: A complete product killer for me, I can't stand more than 45 minutes with these things on my head. 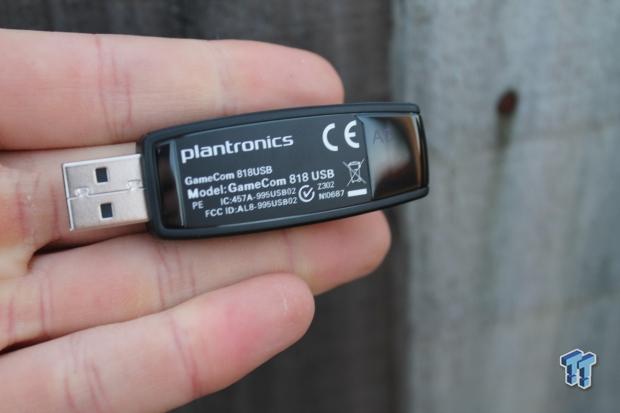 Cheap feeling: Due to the thin and light plastic frame, this product feels much cheaper than most Plantronics products.

Wireless only: It would be great if Plantronics could allow this to be wired and wireless, it does come with a charging USB cable after all.

No carry pouch: What can I say? Having one is really handy.

The sound is crisp and clear, and the bass is great. This $80 headset kills competitors in the sound department, but overall it is completely thrown away by the severe discomfort this product brings to my skill. 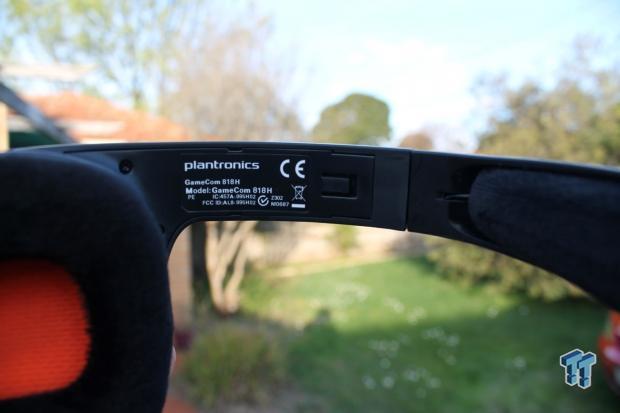 If you're looking at a sub-$100 wireless headset for your son, daughter, niece or nephew I would certainly recommend this product, but anyone older is likely to experience the same head discomfort that I am while writing this. You would be best to try this headset in store before buying it. It might work out alright for you, but it didn't for me.

The Bottom Line: The sound quality is great for the price, however, the comfort is non-existent. Maybe it would be fine for kids, but adults will experience a clamped skull.