4000mAh will get you around 150% charge on any mainstream mobile phone these days, putting the Arctic Power Bank 4000 in the middle ground of what's on offer globally. 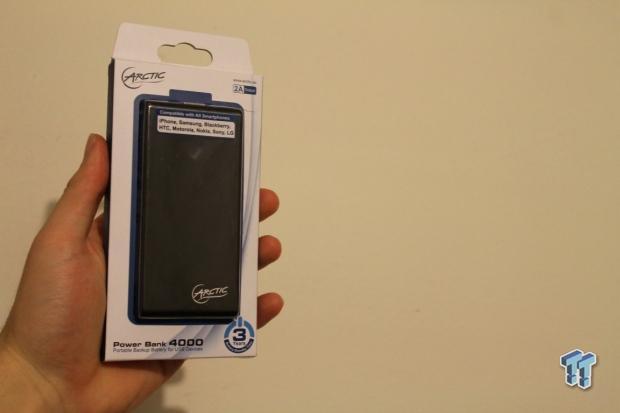 What it really has to sort out is whether the output ports, the included cable and the overall design are done well enough for everyday use on a public transport commute, on a business trip or for leisure. There's also the issue of a strong chassis and exterior - it's good enough to feel sturdy but as the post-use images in this review may point out, misguided cables can often leave the aesthetic looking less than pleasing. Arctic has released some great accessories recently, let's see if this is another addition to the pile.

Listed as the "same size, 3x the capacity of an iPhone 5," this 4000mAh charger is claimed to work with any USB powered device and provide you with a smart charge level indicator to let you know exactly how much is left in the tank. 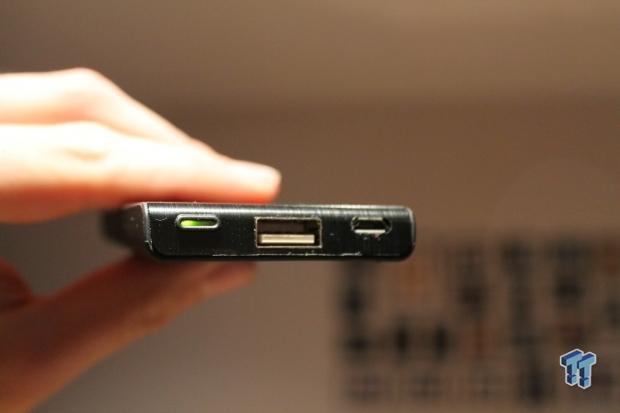 A little different to our previously reviewed batteries, this product contains a 800mAh input and 2A output rating, meaning this battery will see your devices charged at these comparative speeds:

The discharge speed is up there with the best, however, the 800mAh input is of slight concern - meaning your battery pack is going to take a while to charge, especially when compared to the discharging speeds.

As mentioned previously, this power pack contains a total of 4,000 mAh in the tank. If losses are completely taken out of the equation (you can probably expect around 3,500 mAh to be supplied), this portable battery will provide you with the following charge on various smartphone models:

The charging capacity is once again shown as very decent in this model. As for the battery indicator, it displays when the product is discharging and is there to ensure your pack is always topped up before you leave the house. If it matters to you, this product also boasts "3 years standby time due to a low leakage Mosfet" as seen on the official product page.

Listed for $14.95 on the Arctic official store page, this product is extremely well priced especially given the size and sleek look of what's on offer. How it performs when on the road will ultimately determine if it is worthwhile, however.

Providing a good package, this product comes complete with a carry pouch, micro-USB cable, mini-USB cable and the device itself. 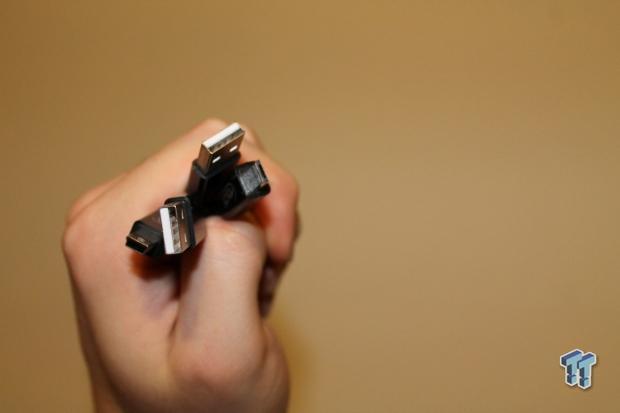 The carry pouch is a great inclusion as it saves the exterior from being scratched whilst on the road, along with the cables all being kept in one place to avoid losing them.

Interesting is the fact that this product comes with the mini-USB (house shape aka camera) cable, it's not used to charge the device (that's micro-USB) so we're a little confused why it's there - but it's not a bad thing. What is bad is the length of the cables supplied, they're seriously short and should be at least three times longer as seen with other brands.

It feels sturdy and well constructed, no issues come when carrying it in your pocket or bag on a daily commute as I did to university for two weeks straight. However, as the introduction pointed out, this product has the issue of scratches showing up on the exterior quite easily as seen in the images after two weeks of constant use. 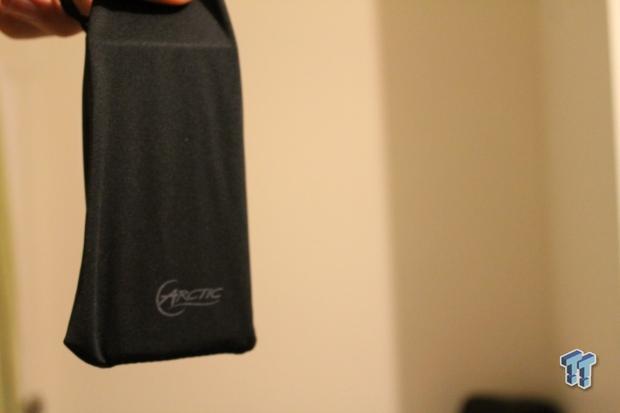 The output port looks a little clunky when the cable is plugged in as the design slants slightly and makes the able look like it it's quite plugged in perfectly - even though it is. The shape is good, it's nice and flat and fits in small pockets well, it also fits well behind the back of your phone, very similarly to the TYLT 5,000 mAh charger.

I'm going to start this off exactly as I did with some previous reviews I have done. To cut a long story short, the best consumer for this product would be someone who either: 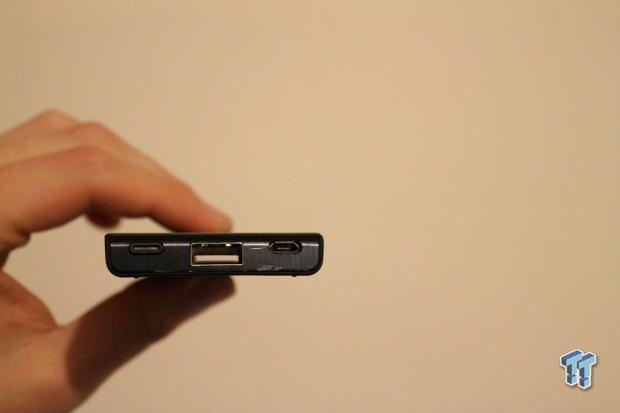 What does this mean? The shape is much better than previously reviewed items like the Hue Stik and the ScaleUp 3,000 and suits basically any user. The 2A output is great and will charge your smartphone quickly even while in heavy use, even though the 800mAh input is a little lacklustre.

The real issue comes with using this product on the go. As mentioned previously, the cable is extremely short and should be around 3-4 times as long as it is, this coupled with the fact that it connects on one extreme end of the charger means that it's a bit awkward sitting on your pocket and feels like you might snap off the cable out of the USB port. I haven't had any major issues with using it while on the run, but there's always the thought in the back of my mind that I might end up breaking the product if I bend over and put too much stress on it.

The price: For under $20, there's nothing better in the price department for the amount of juice on offer. 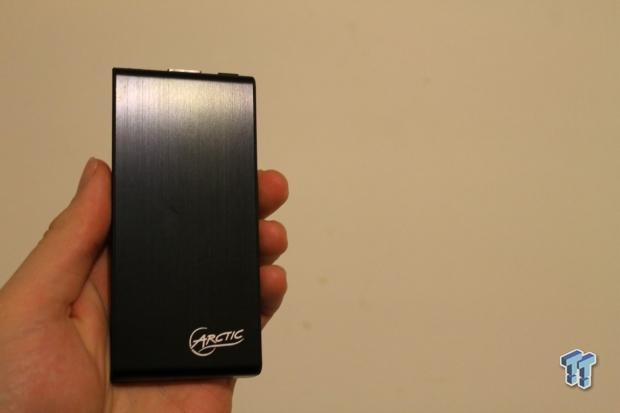 The shape: It fits well in your pocket alongside a smartphone like my Samsung Galaxy S4.

The capacity: 4000mAh in a portable pack will easily help you along on a full day of moderate to heavy use.

The cable connection: If you're charging your phone and walking, it feels like the cable might break in your pocket at the connection. 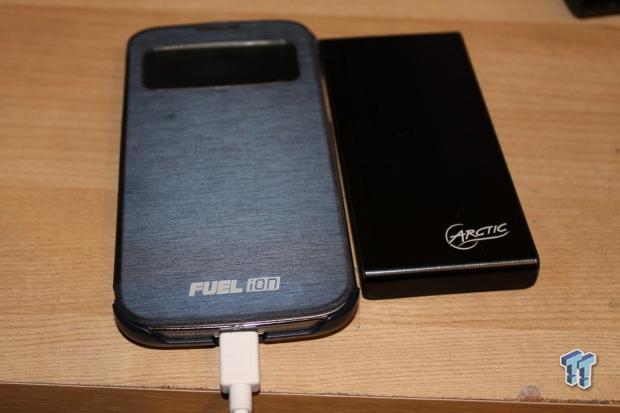 Input limitations: With input charging limited to only 800mAh, expect it to take a while to charge - best off leaving it overnight.

2A output, a range of accessories and the sleek nature coupled with a large capacity helps this charger achieve the score below. These mostly but don't completely outweigh the issues of a weird looking battery indicator and the cable feeling a little awkward when in use in your pocket. 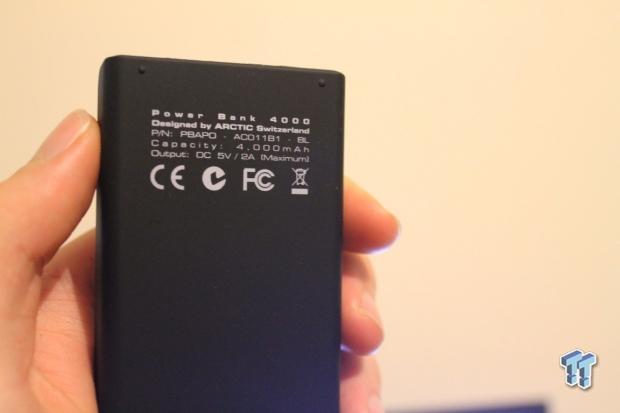 Overall this product is not bad and could benefit from longer cables coupled with a different output port positioning, but at under $20 for 4000mAh, you really cannot complain too much. It's something that I will be keeping as a backup to the 5,000 mAh TYLT Energi 5k offering.

The Bottom Line: The design is a little clunky, but it's cheap, large in capacity and comes with all the extras you may need. A great spare to keep on the shelf.