Spigen's Slim Armor case for the Samsung Galaxy S6 edge is a near perfect product, apart from the flimsy volume buttons. If you want to protect your investment, this is the case for you.

When I first pulled the trigger on the Samsung Galaxy S6 edge, I did so without organizing a case. Then, I received the smartphone and instantly, I knew I had to have one. I'm the type of person who likes their smartphones naked: no case, no screen protector - naked.

But, the Galaxy S6 edge is a bloody beautiful smartphone with a glass back and front, and while the front of the S6 edge is protected by Corning's Gorilla Glass 4, the back is completely out in the open. I decided to take a look around at some cases, with the Spigen brand really springing out at me. 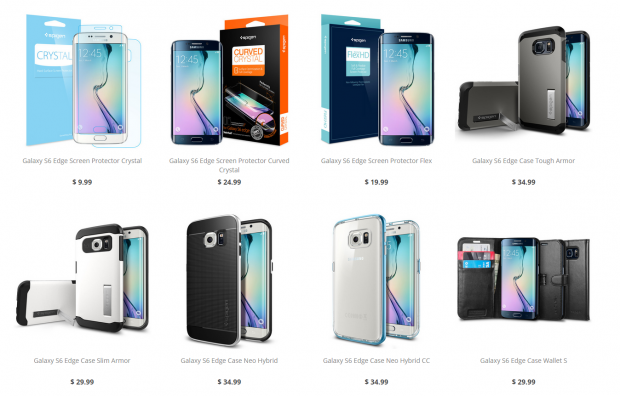 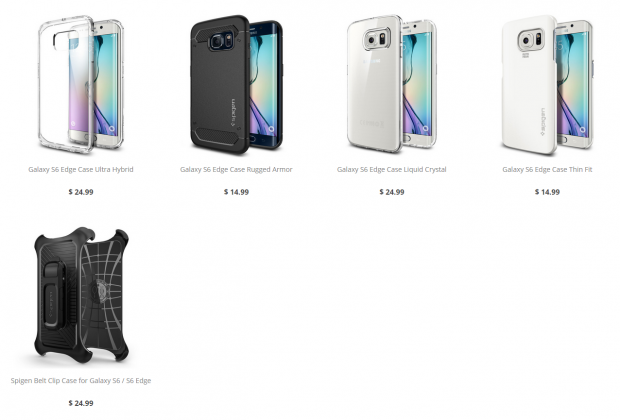 Spigen has quite the range of cases for the Samsung Galaxy S6 edge, but the Slim Armor Case is what stood out for me. It has a bunch of features that will protect your S6 edge, such as "Air Cushion Technology" and dual-layered protection. 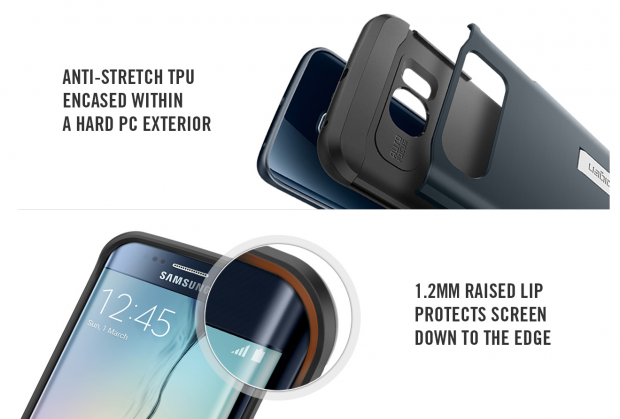 The Slim Armor Case also has a shock-absorbing TPU interior backed up by a polycarbonate exterior that keeps your S6 edge nice and snug, and most importantly: safe. The Slim Armor Case has a raised lip of 1.2mm which follows the edge screen, and protects it.

Up Close and Personal With the Spigen Slim Armor Case 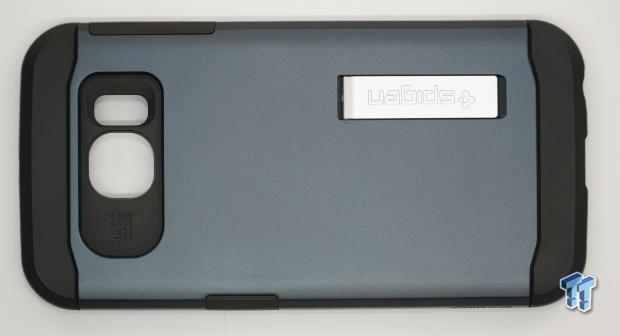 The back of the Spigen Slim Armor Case, with the fold-out kickstand visible in the top right. The camera and heartbeat monitor cutouts are sizable, so you'll have no issues using those two features on your Galaxy S6 edge. 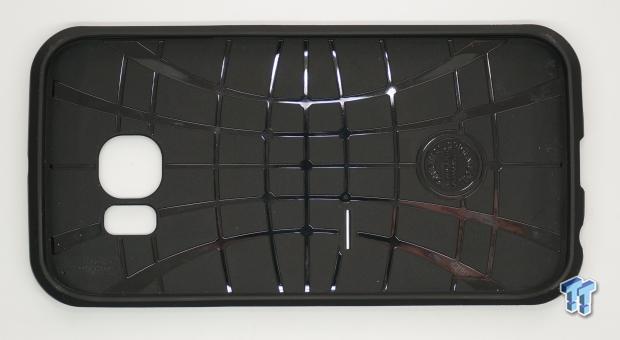 Inside of the Slim Armor Case, we can see that super protective rubber lining that keeps your S6 edge nice and snug. 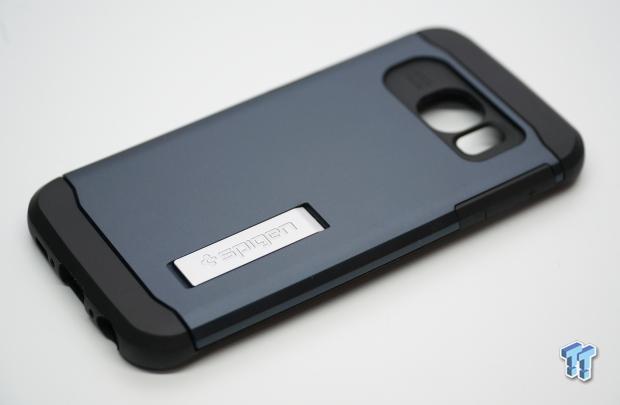 An overall look at the Slim Armor Case. 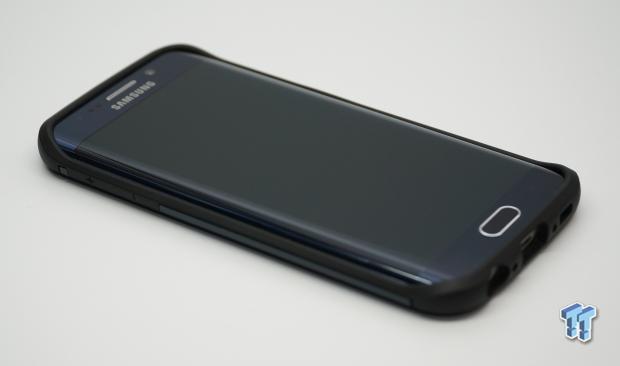 And again, with our Galaxy S6 edge installed. 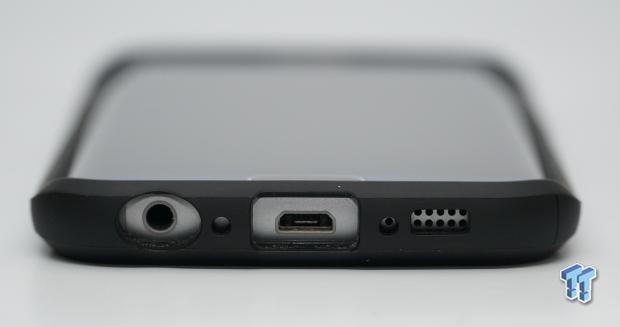 There's plenty of room to place your microUSB cable in for charging and syncing, as well as the 3.5mm jack for your headphones or speakers.

To the right, we have the 'PWR' button.

To the left, we have the volume up and down buttons. 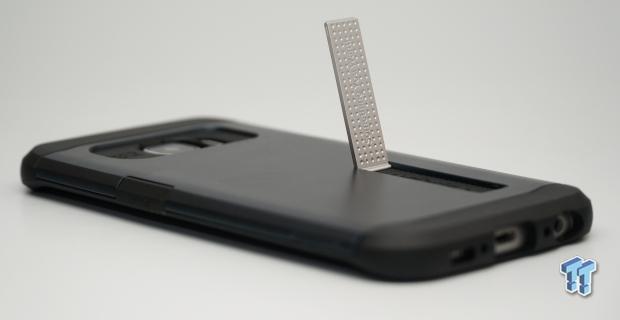 The fold out kickstand is such a great feature, something I've been using most days. 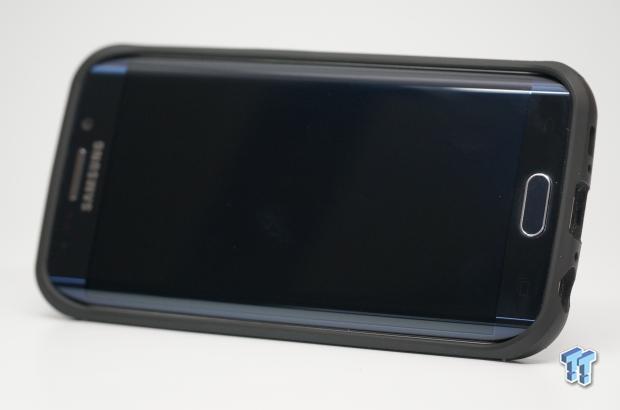 Here's the Galaxy S6 edge standing up thanks to the kickstand. 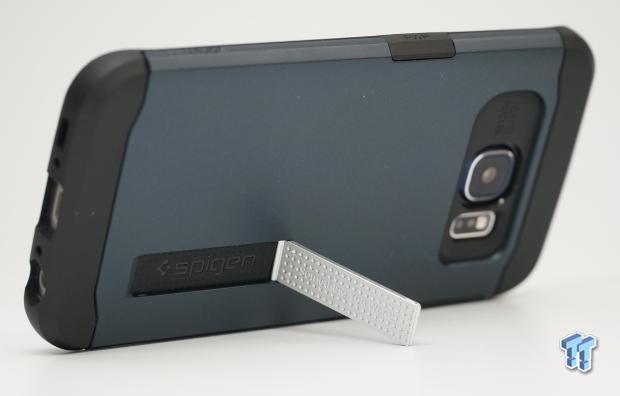 Here's what it looks like from the back when the kickstand is in use.

Installing my Galaxy S6 edge into the Spigen Slim Armor Case required next to no effort, it just slid in and voila, a protected S6 edge. From there, I have thoroughly loved the case, having only taken it off to make sure it was doing its job and to put the S6 edge into my new Gear VR headset. It does make the S6 edge considerably thicker, which is something you only really notice once you take the S6 edge out of the Slim Armor Case. Once it's in there though, you get used to the thickness and that feeling of 'is it too thick?' goes away.

When you have your S6 edge with the Slim Armor Case placed down on its face, the rim surrounding the case keeps your display off the surface it's on by a very slim margin. It's just enough that you won't scratch your S6 edge display, allowing you to go into a meeting and have it face down on your desk so that you have no distractions.

The kickstand is one of my favorite parts of the Slim Armor Case, but it was something I overlooked when I purchased it, and into the first few days with it on my S6 edge. I didn't think I'd use it that often, but I watch YouTube videos every night, so the kickstand become a part of my nightly ritual. Thanks for that addition, Spigen!

One of the main reasons I wanted to buy a case for my Galaxy S6 edge is that it is extremely slippery on its own, but the Slim Armor Case is nice and textured, which solved the problem completely. I never had a worry of dropping or having the Galaxy S6 edge slip out of my hands when the case was on, but when it was off... I felt like I was going to drop it every time I used it.

The volume buttons on the side of the Slim Armor Case are one of its major downfalls though, which is an issue. There's no definition between the buttons, so I found myself constantly fumbling to press the right one. I do wish that Spigen would fix this in the next iteration, as you can slide your finger up and down the side of the case and barely even feel that the volume buttons are there.

Great Protection For Your Galaxy S6 edge: When you're spending a large sum of money on a smartphone, you want to protect it. This is what the Spigen Slim Armor Case does best: keep your Galaxy S6 edge nice and safe away from danger.

It Looks Great: Not only does the Slim Armor Case protect your phone, it does so while looking great. I really love the style that Spigen has gone for with the case.

Excellent Materials Used = Feels Great in Your Hands: Spigen has used some impressive materials with the Slim Armor Case, with the anti-stretch TPU going a long way in making sure that the case lasts for a long time. It feels great to hold, and makes the slippery Galaxy S6 edge much better to hold in your hands.

Volume Buttons Are Fail: Seriously, this is one of the worst parts of the Slim Armor Case, because other than this little flaw, it's an excellent product. The volume buttons aren't something that I would warn you to not buy the case over, but it's something you should be aware of.

The Samsung Galaxy S6 edge is the most beautiful smartphone I've ever used, and because of its glass back and front, I wanted to protect it from the environment. My pocket, table, desk and every other spot I'll place it are dangers to its beautiful design as I don't want scratches or scuffs on it.

This is why I decided to go with the Spigen Slim Armor Case and I don't regret it at all. Sure, the volume buttons aren't great, but everything else about the case is a knockout of the park. The flip-out kickstand is simply awesome, where I've even spotted my wife using the kickstand on her Galaxy S6 edge with her Spigen case. She said to me today, the day I was writing the review (good timing, eh?!) that she "loved the little stand thing on the back of her case".

My wife added that she could watch her videos while her phone was sitting next to her on the lounge, which gives the Spigen Slim Armor Case my Wife's Seal of Approval. Too bad there's not an award for that - but seriously, this is a damn good case for your Galaxy S6 edge.

The Bottom Line: Spigen's Slim Armor case for the Samsung Galaxy S6 edge is a near perfect product, apart from the flimsy volume buttons. If you want to protect your investment, this is the case for you.