While many NAS appliances require you to bring your own disks, Buffalo's NAS solutions typically come as turnkey solutions, and that is the case with the latest TeraStation 1200. The TS1200 is a dual bay storage solution featuring capacities ranging from 2TB to 8TB.

RAID modes include 0 and 1, along with JBOD with network connectivity available via the rear-mounted gigabit LAN port. In addition to the aforementioned connectivity, the TeraStation 1200 also features a USB port on the rear of the unit.

Aesthetics of the unit are similar to what we have previously seen with LinkStation models with the red on black design; although, this unit does carry a removable front door to easily access the drives. 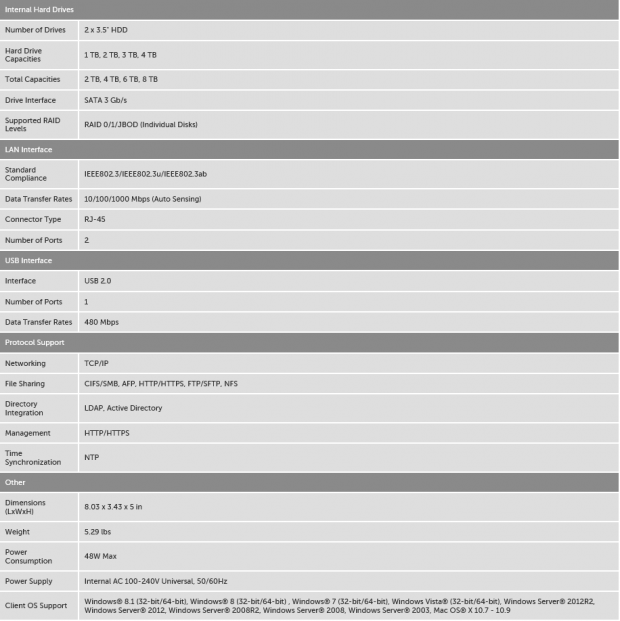 Behind the scenes of the TeraStation 1200, we have a dual-issue ARM 1.2GHz processor paired with 512MB of DDR3 memory. The drives are interfaces via SATA 3Gb/s technology, while offering RAID 0 and 1 availability. As a turnkey solution, the TeraStation 1200 comes with drives populating the slots in several configurations of up to 8TB. Network and USB connectivity is made available on the rear of the unit, while several network features include services such as SMB, AFP, and NFS, along with LDAP and Active Directory support.

PRICING: You can find the Buffalo TeraStation 1200 for sale below. The prices listed are valid at the time of writing, but can change at any time. Click the link to see the very latest pricing for the best deal. 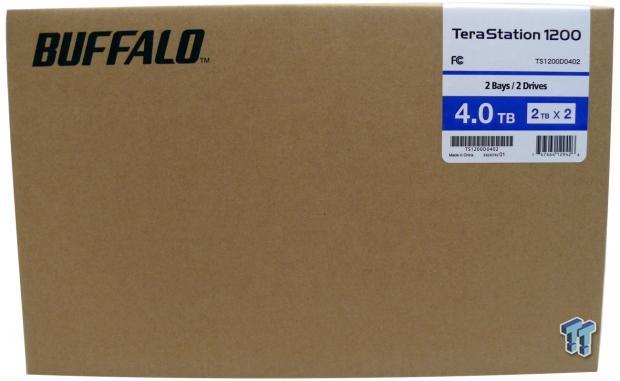 Packaging for the TeraStation 1200 carries model and capacity designations at the top right. 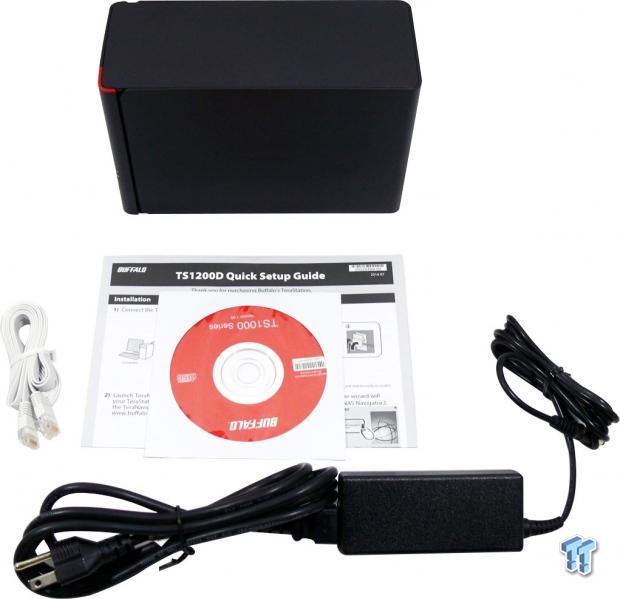 The scope of delivery for the 4TB TeraStation includes the power adapter, Ethernet cable, and reading materials. 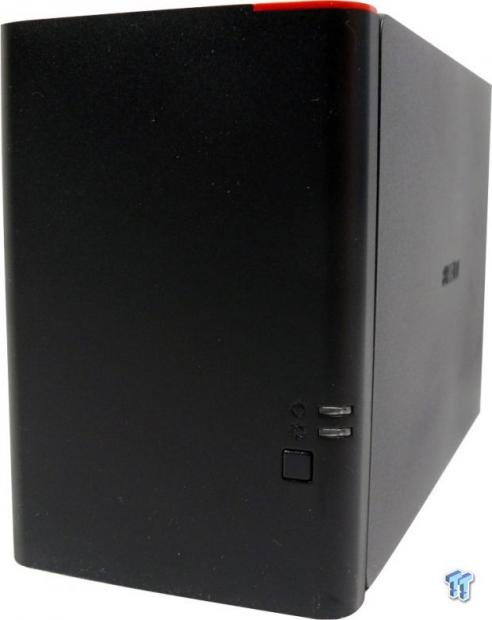 The front of the TeraStation 1200 carries the same design concept we saw with the LinkStation series. Here we have the same red on black scheme; although, this unit allows you to swap drives easily via the removable front. 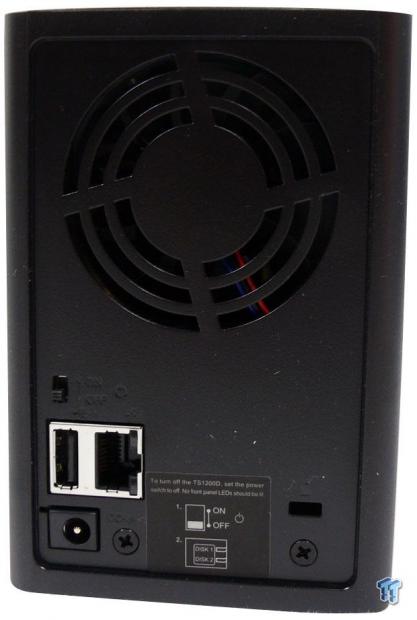 The back of the NAS houses the cooling fan, along with the power switch, and both LAN and USB 2.0 ports. At the very bottom, we have the power input and Kensington lock slot to the right. 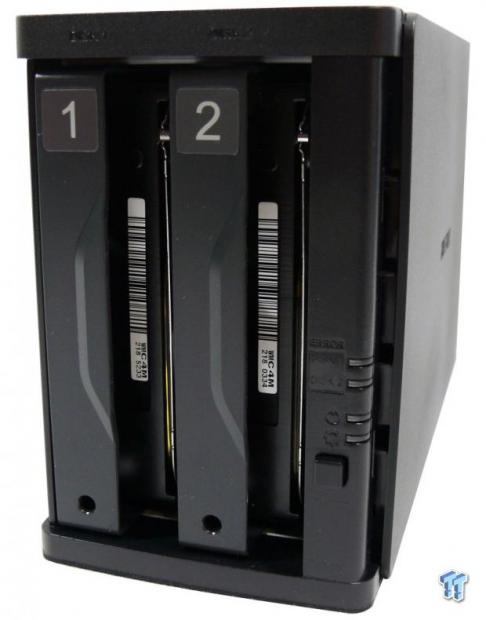 Upon removing the front panel, we see the plastic drive trays are numbered to simplify installation. 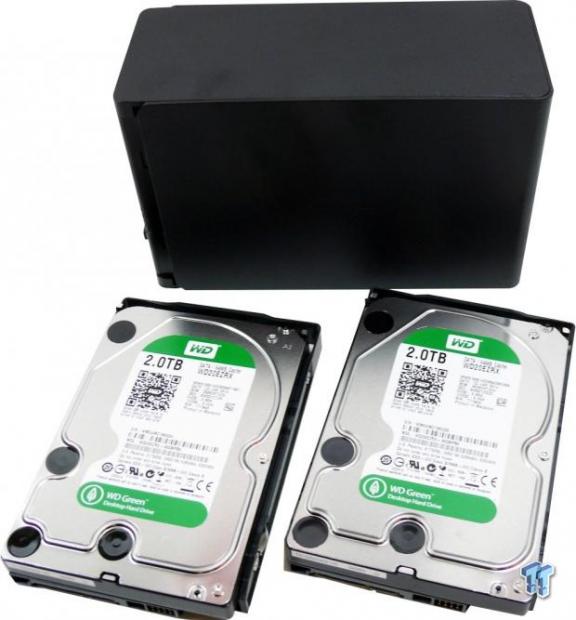 Our Consumer NAS test "system" is setup similar to what you have at home. Here we have the base of a GIGABYTE Z97X UD7 TH, housing an Intel Core i7 4770 with 16GB of RAM supporting. Our Operating System of choice is Windows 8 x64 Enterprise, with all available updates and patches installed on a pair of Samsung 840 SSDs. On the networking side, we utilized the Intel PRO1000 PT Server Adapter with a direct connection to each NAS appliance. This eliminates the need for a switch, and any bottlenecks that may occur. 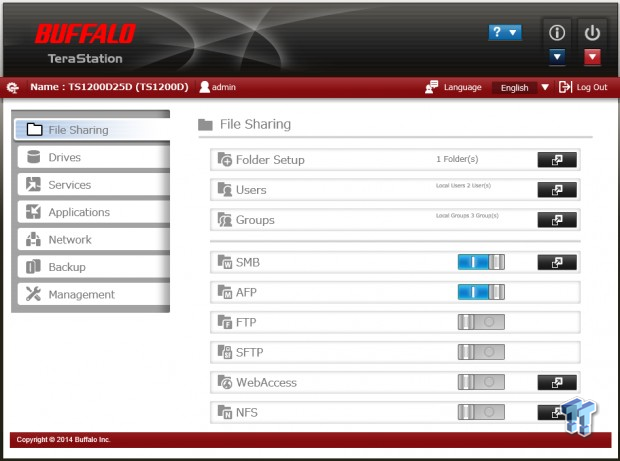 After logging into the web management for the TeraStation 1200, we land on the Filesharing tab. From here you can setup folders, add users and groups, and enable and disable filesharing services like SMB, AFP, and NFS. 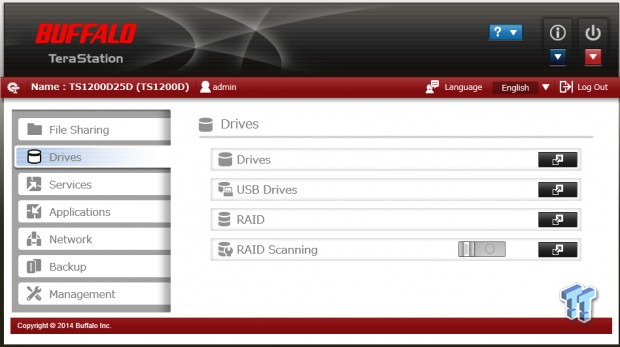 The Drives tab menu allows you to setup RAID on the internal drives, and set up external storage via the USB port on the rear of the unit. 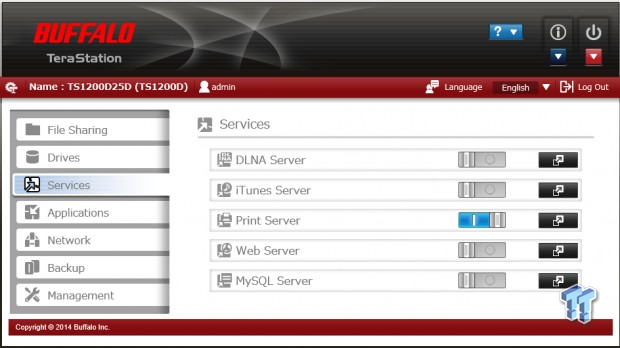 Further down, we enter the Services tab. From here you can choose from DLNA, iTunes, and Web Server, among others. 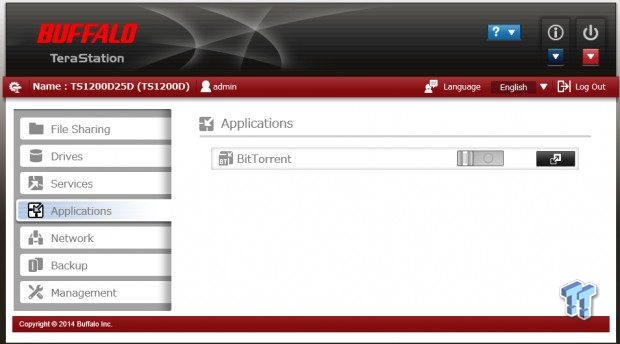 In the Applications tab, there is a single app available. 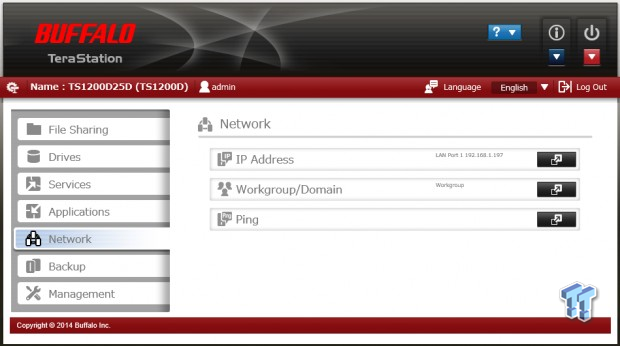 The Network tab allows you to setup the IP address of the NAS, and change the workgroup name, or join a domain. 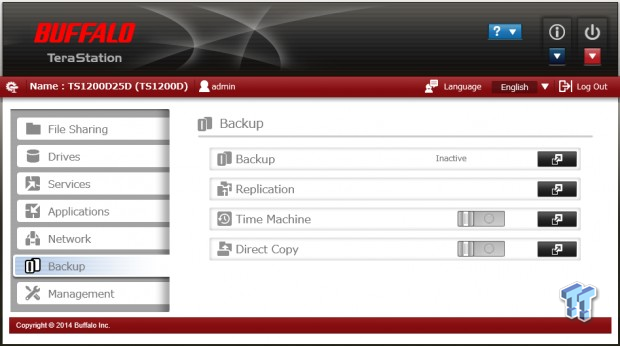 Within the Backup menu, you can choose to setup remote replication, time machine, and direct copy via USB. 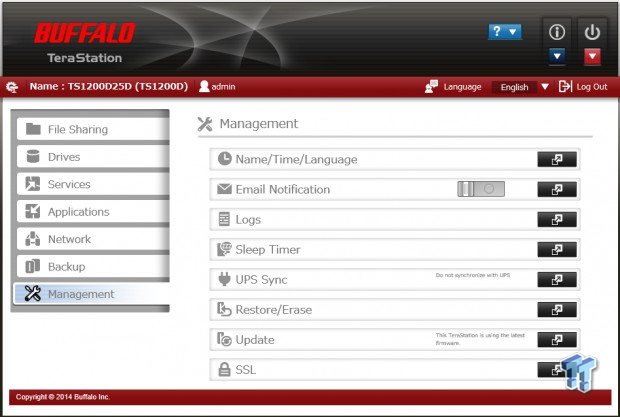 The Management screen allows you to adjust time and date settings, enable a sleep timer, and restore and update functions. 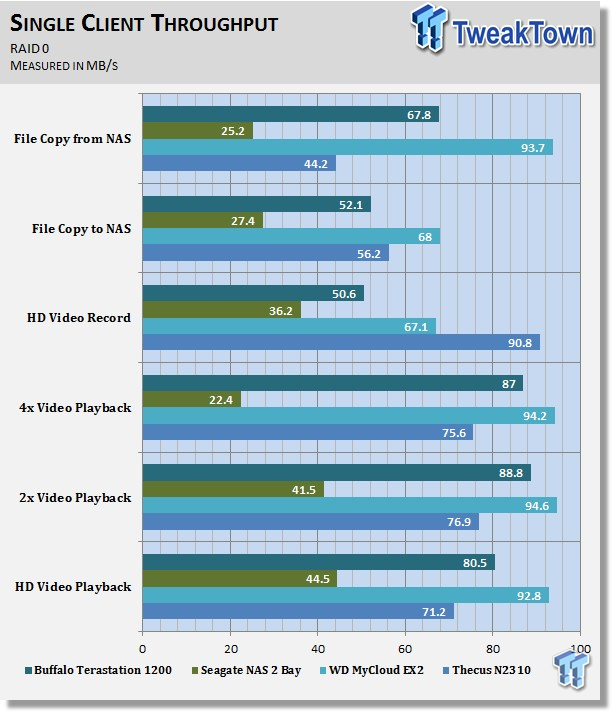 Starting off with RAID 0 results: the TeraStation 1200 did remarkably well. HD Video Playback came in at 80.5 MB/s, while peak results were 87 MB/s during 4x Playback. 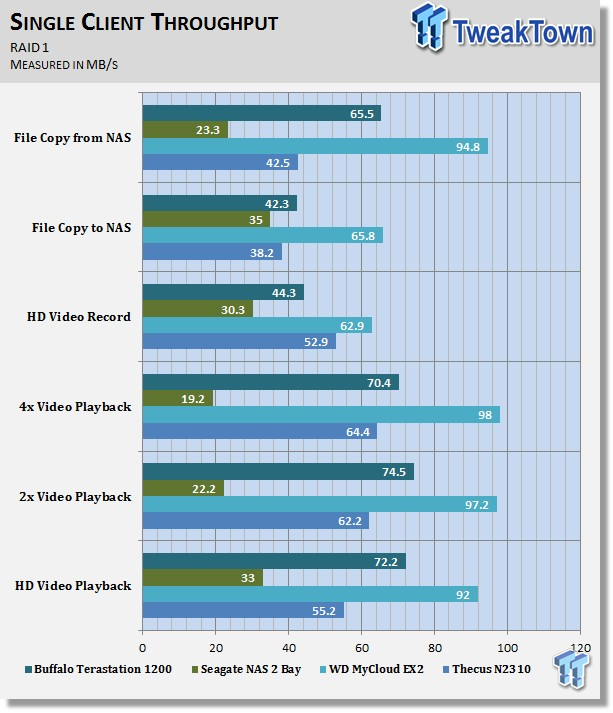 Moving over to RAID 1, results nearly topped the charts. Peak numbers came in at 74.5 MB/s during 2x playback, while video record and file copy to the NAS came in at 44.3 and 42.3 MB/s, respectively.

Our Sequential read/write workload is centered on 128K transfer sizes; again, with sixteen threads, and a Queue Depth of eight. 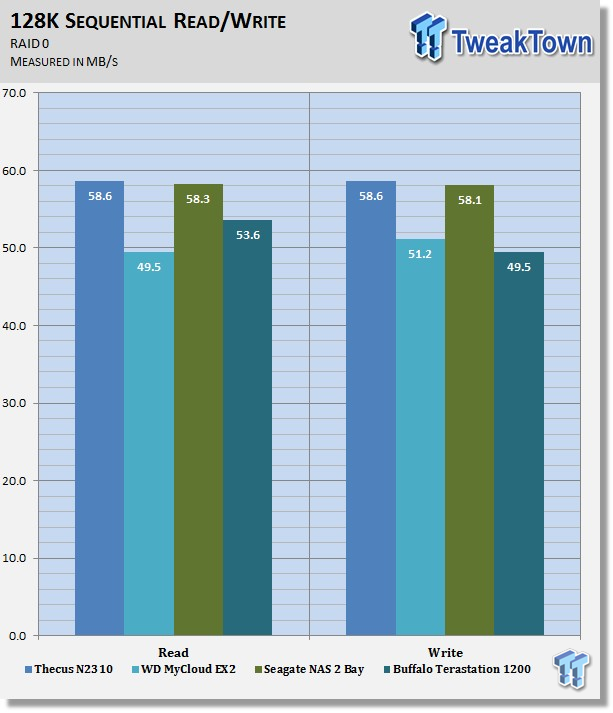 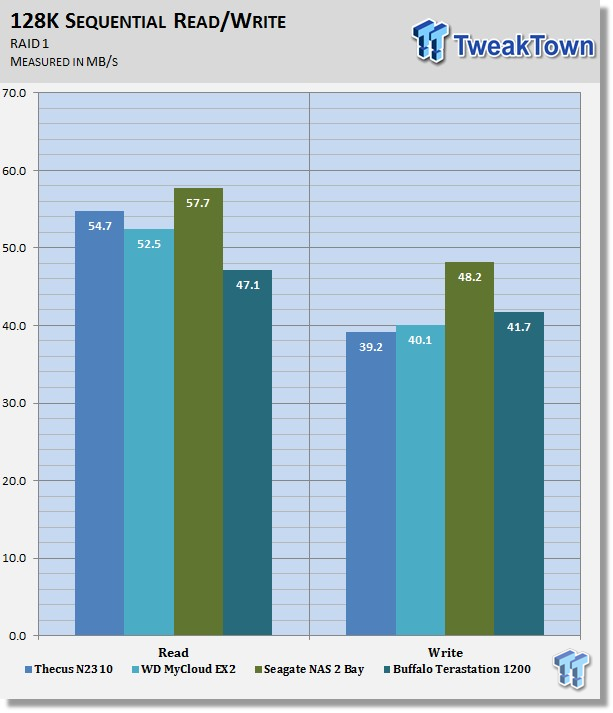 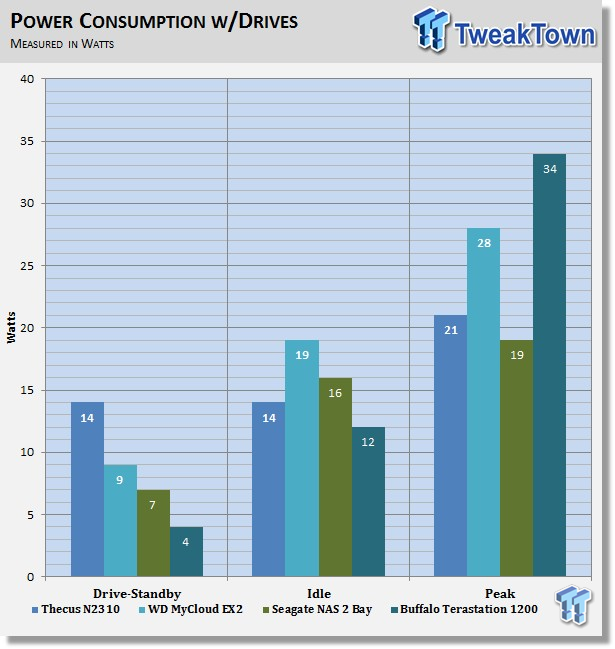 Power consumption for the TeraStation 1200 peaked at 34 watts, while idle and drive standby came in at twelve and four watts, respectively.

The latest turnkey NAS solution from Buffalo is quite a surprising solution. Build quality seems to be rather good; plastics fit tightly, and the front panel snaps on and off with ease - though the power cord does seem a bit loose fitting.

The web management for the TS1200 is very straight forward and easy to use, and carries all of the basic features a NAS appliance should carry. Within the management, access to everything from the basic filesharing including SMB, AFP, and NFS is included, along with some higher level features like FTP server. Furthermore, when you move to the services menu, the TeraStation allows access to a web server, print server, and media server via DLNA.

Storage performance of the TeraStation 1200 is decent for a consumer turnkey solution. Looking back at our charts, we see the Buffalo was able to outperform both of the Seagate two bay NAS and Thecus N2310 in our single client testing, and moving over to sequential performance, it still maintained a good throughput upwards of 60 MB/s. Power consumption of the TS1200 was rather high at its peak, but idle and standby consumption was the lowest we have seen for a two bay solution.

Overall, the Buffalo TeraStation 1200 in the 4TB capacity is an excellent solution for those that don't want the hassle that can come with typical BYOD NAS solutions. This NAS is very easy to setup, and the web management allows you to change settings without much effort.

PRICING: You can find the Buffalo TeraStation 1200 for sale below. The prices listed are valid at the time of writing, but can change at any time. Click the link to see the very latest pricing for the best deal.

The Bottom Line: Buffalo's TeraStation 1200 is one of the best turn-key solutions on the market for those that want something simple and easy to use. Adding to this, Buffalo is offering a great price point for each capacity, making it one of the best values in the consumer NAS market.