The design and sound output of the Supersonic-X is truly great when you consider its $56 price. Better yet is that it kicks ass at delivering a huge punch in the bass department, hitting way above its weight, and size. 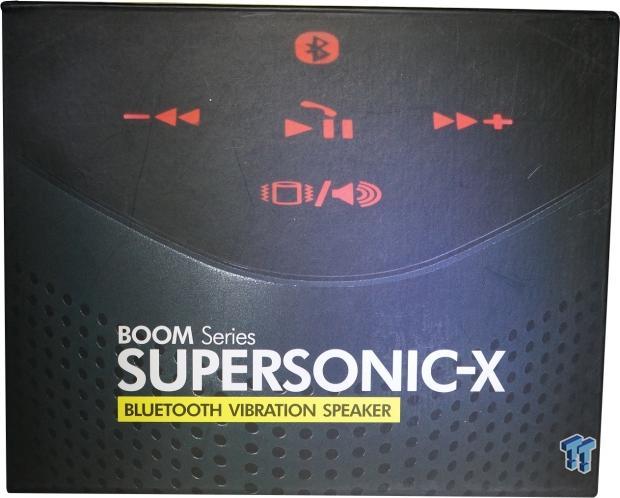 Andromedia is a name you've probably never heard of, and until my e-mail correspondence with the company, neither had I. The company has a bunch of mobile audio products, but the two stand out ones we have in our hands are from their Boom Series of Bluetooth speakers.

The speaker we have with us today is the Supersonic-X, an interesting new Bluetooth speaker that packs quite a punch in its small footprint. It's a small speaker, but with its 'Vibration Technology' it provides two uses for the speaker - one with thumping bass that vibrates the surface it is on, and the other takes the bass away for clearer, louder sound.

Andromedia have two speakers in their Boom Series, with the one we have here today being the Supersonic-X. Andromedia has baked in 4.1 speaker drivers and a subwoofer into the Supersonic-X, and mixed with the vibration effect, it's an incredibly loud and thumpy audio experience. We have an 850mAh battery that keeps you listening to music for hours on end, too.

The Supersonic-X has 'Vibration Technology" which Andromedia says is for "deep powerful bass" - and they're right. We also have speakerphone capabilities, an ergonomic touch key for operating the speaker, a built-in microphone, 15W of total output power, an 850mAh battery, and DC input for charging it up.

Andromedia has priced the Supersonic-X at just $56, making it an incredible speaker for the money. It is priced at the identical price of the Supersonic-P, which has similar features, minus the 3.5mm auxiliary jack, and four speaker setup.

When it comes to physical design, the Supersonic-X has a curved diamond shape which I really loved. The black and grey design with blood red lights on top really have an eye-catching look.

We'll first take a look at the Supersonic-X, from top, bottom, and all around. 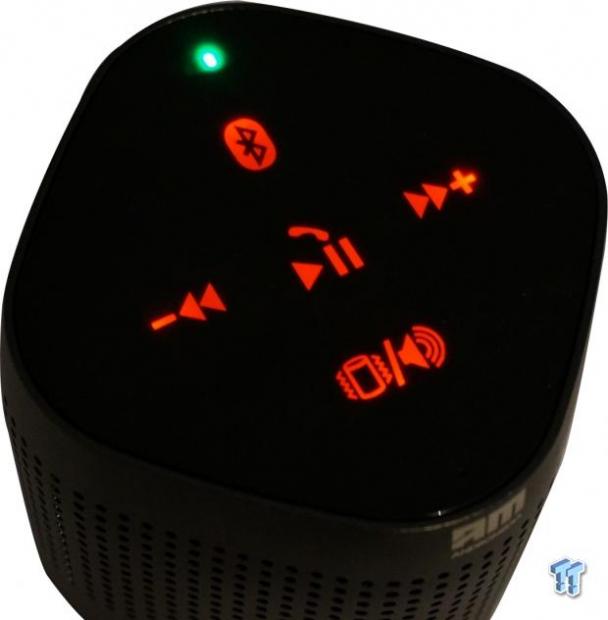 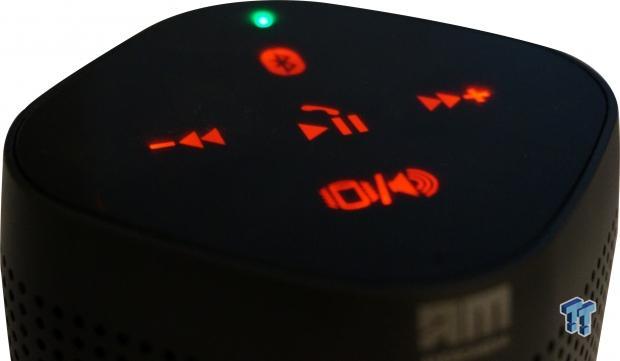 Starting at the top, we have a bunch of touch-capable keys to press. Starting at the top, we have the Bluetooth on/off button, rewind/previous track, play/pause/answer/hang-up call, fast forward/next track, and a button to turn on/off the vibration feature. Right up the top of the Supersonic-X are two LEDs, one red and one green. Green indicates that it is on, while the red light will flash when it is charging. 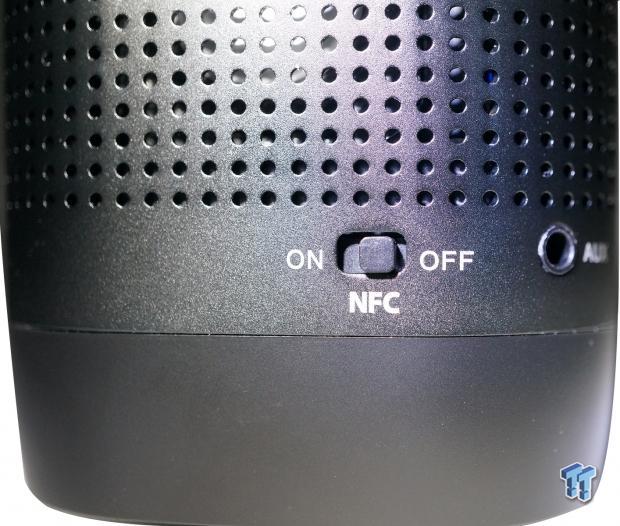 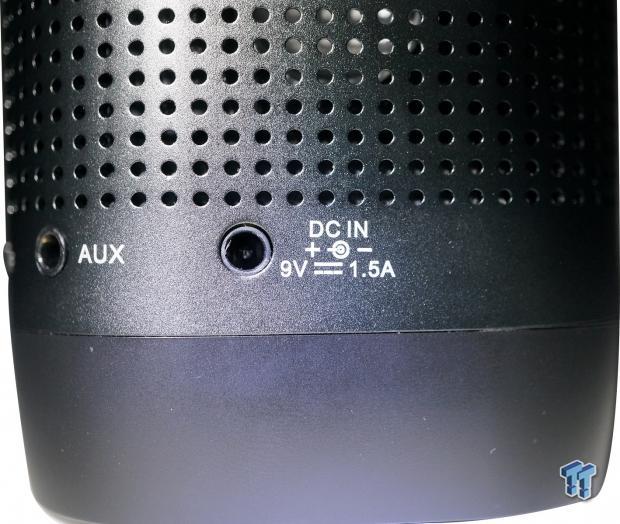 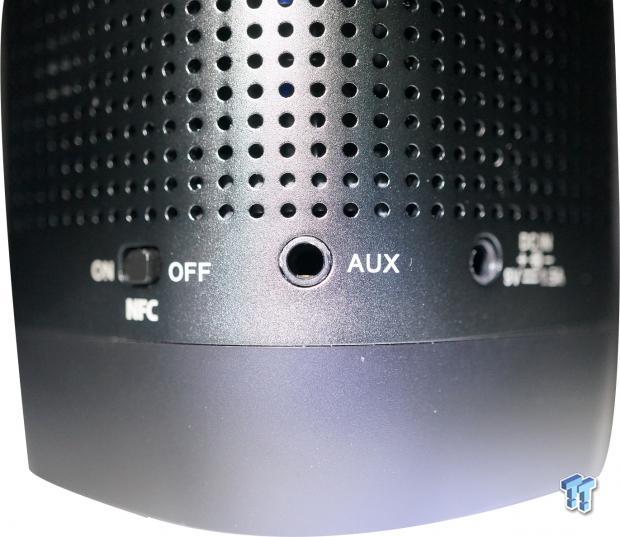 On the side of the Supersonic-X we have (from left to right) an on/off switch, 3.5mm auxiliary in, and the 9V/1.5A DC input for charging it up. 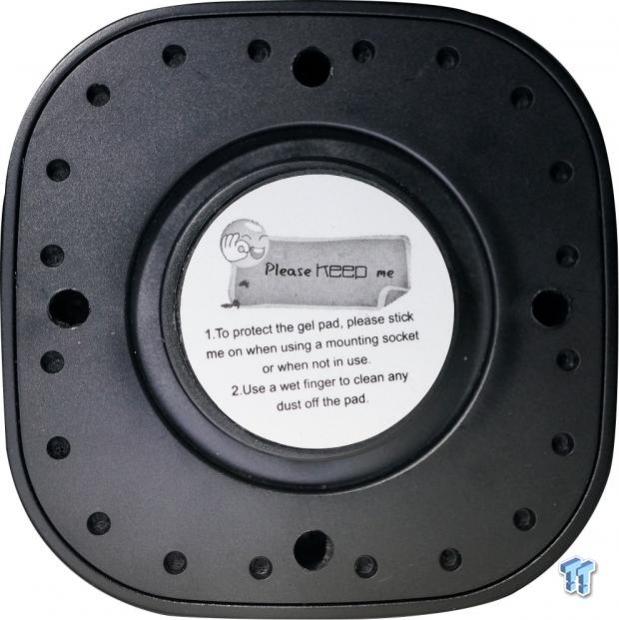 On the bottom of the Supersonic-X we have the subwoofer, which puts out some serious bass for a little speaker. 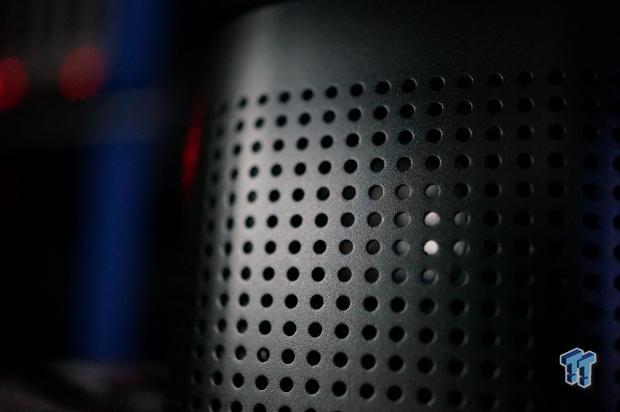 The sides of the Supersonic-X feature an awesome punctured design that allows the 360-degree omnidirectional sound to blast out. 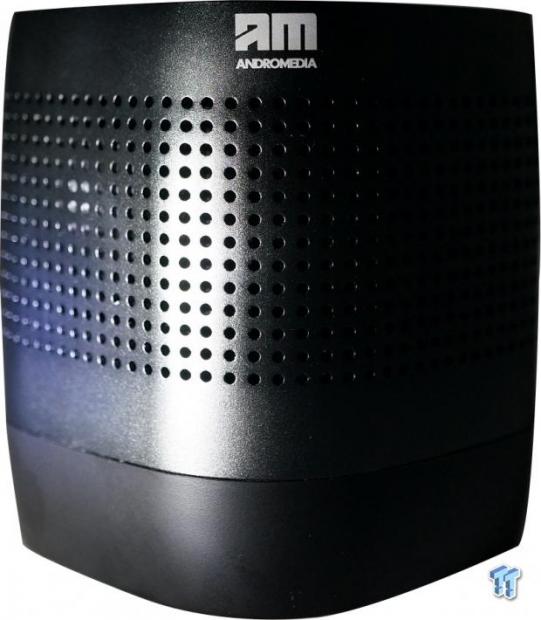 NFC capabilities and the Vibration Technology are the two standout features with the Supersonic-X, first we'll tackle the NFC part of the speaker.

I was using my Sony Xperia Z2 smartphone during my time with the Supersonic-X speaker, and getting NFC to work was a bit of a hassle. Holding my Xperia Z2 up to the side of the Supersonic-X, and only half the time it connected through NFC. I had to sometimes use Bluetooth because it was just, easier.

The Vibration Technology that Andromedia has baked into the Supersonic-X is actually pretty damn impressive. I can put down a tiny mobile speaker and have it thump bass directly into the surface it is sitting on, with some great results. You wouldn't think that this much bass can come from such a small speaker, but it can. 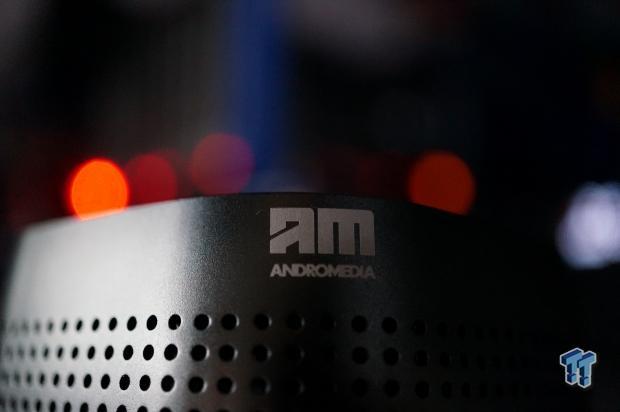 In my office, I listened to a variety of music styles on the Supersonic-X, where it surprised in nearly all aspects. From clarity for the vocal parts of the songs, to great bass in tracks from Rage Against the Machine, the Supersonic-X delivered.

The beauty about the 360-degree audio is that it's not just blasting audio in front of it, meaning that people sitting to the side or behind the speaker miss out on the music. When it's placed outside, I put it to the side of the group of people I was with, or right in the middle, allowing it to blast music out in all directions.

For those who want to sum up the entire review in a few points, the What's Hot and What's Not part of my review will help you. Skip right to this bit if you want a quick read, or if you want to find out what I found to be the most notable parts of the Supersonic-X, we're going to jump into that right now.

Its Size & Design: For a newcomer to the portable Bluetooth speaker game, Andromedia has delivered not only something that looks great, but it is also quite petite. The design is something that will appeal to a wide audience, while the size is perfect for carrying it around to a friend's house for some audio that will fill up a room without a problem.

Lots of Bass!: This is something I really didn't expect from the Supersonic-X, especially when I took it out of the box and felt it in my hands, noting its size. But, when it's cranked up, it will really vibrate your entire table without a problem.

DC input only: This is one downside of the Supersonic-X speaker, is that it requires DC power. I wish that Andromedia had gone with micro USB to power its speaker, but unfortunately you require a power cord if you want to use this all day. Alternatively, if you were to not have it charged up to 100%, and say at 50%, you couldn't trust it to last for a few hours without having to worry about the closest power point.

For one of their first audio products, Andromedia have surprised me. Not only have they crafted a great-looking mobile speaker, but it sounds great, too. The Vibration Technology that it sports is used to great effect, vibrating my entire table as I type this.

The one downside is the DC power input requirement, which will turn a lot of people away from this speaker. I think if Andromedia had included both - micro USB and DC input - it would've made one of the best mobile speaker offerings in quite a while. It doesn't pack a massive punch, but for its size, it's one hell of a speaker.

The Bottom Line: The design and sound output of the Supersonic-X is truly great when you consider its $56 price. Better yet is that it kicks ass at delivering a huge punch in the bass department, hitting way above its weight, and size.