While Apple has hit all of its marks on quality, sound and performance, Siri still needs work starting with improving voice recognition and accuracy.

There is no denying it took Apple way to long to enter the smart speaker market with Amazon launching Echo in 2014, Google releasing Home in 2016, and Harmon Kardon offering the Cortana powered Invoke in late 2017. In fact, the HomePod was announced a little over a year ago started shipping February of this year.

The HomePod comes in two colors; Space Gray and White. Weight comes in at 5.5lbs and dimensions of 6.8 inches tall and 5.6 inches in diameter. Apple notes the HomePod is powered by the Apple A8 chip, featuring seven-horn loaded tweeters, 4" high-excursion subwoofer, eight audio amplifiers and a six-microphone array. Further, we have 802.11ac Wi-Fi, Bluetooth 5 with AirPlay 2 and Audio beamforming.

Siri is the digital assistant captured inside the HomePod giving you access to Podcasts, Apple Music, Pandora, Spotify, iHeartRadio and Amazon Music to name a few. You can also listen an audiobook with iBooks and Audible and have your daily news read from a number of sources. Further, Siri can control your HomeKit devices acting as a hub for your entire smart home and if enabled personal requests such as read and send messages, add reminders and create notes is available if the paired iDevice is on the same Wi-Fi network.

MSRP of the Apple HomePod comes in at $349.99 with a one-year warranty. Additional warranty coverage can be purchased through AppleCare+ for $39. 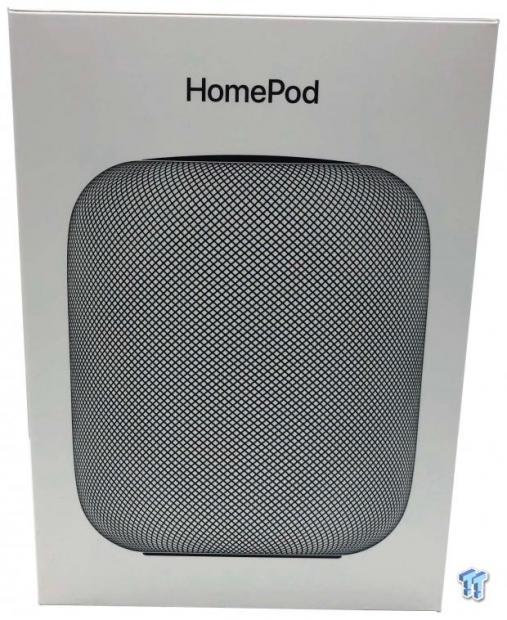 Packaging follows the standard set by Apple with all of their products. Above, we have a white box with an image of the HomePod. 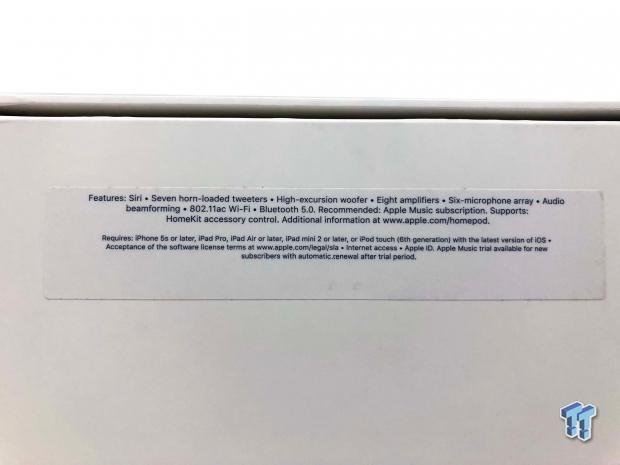 The bottom of the box offers specifications of the HomePod and its services. 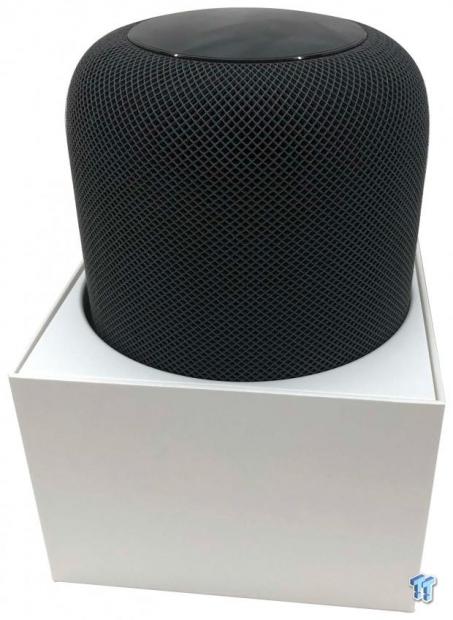 When opening the box, the experience furthers with the HomePod encased in a plastic retainer. 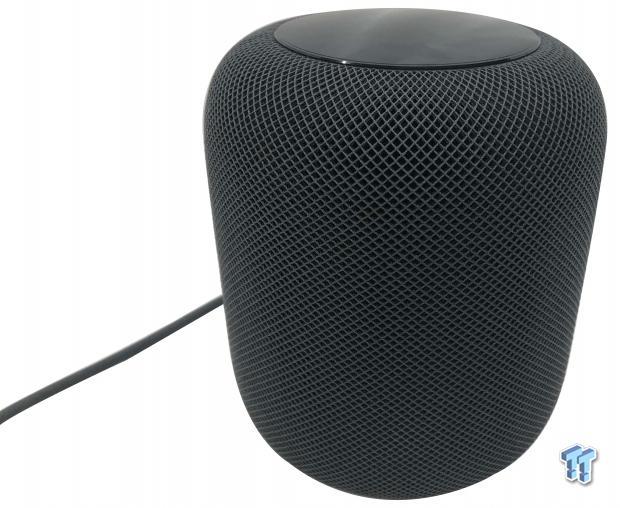 Removing the HomePod from the package, we have a mesh exterior with a bit of depth to it. 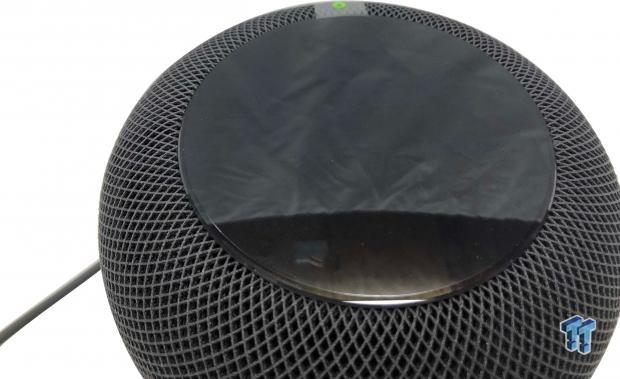 On top, we have a simple touchscreen for volume and Siri control. 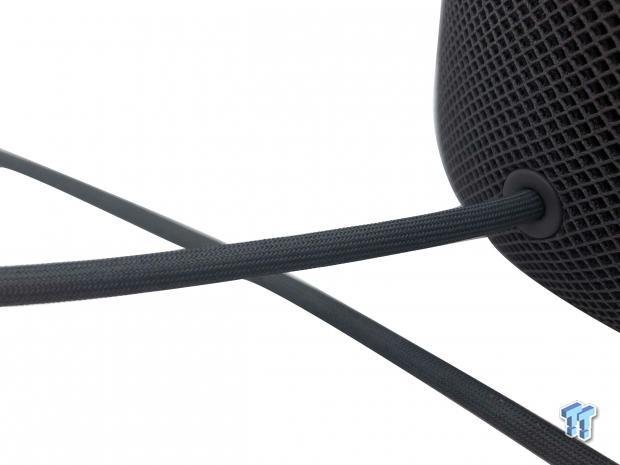 The power cord comes in around 5ft and is wrapped in paracord. 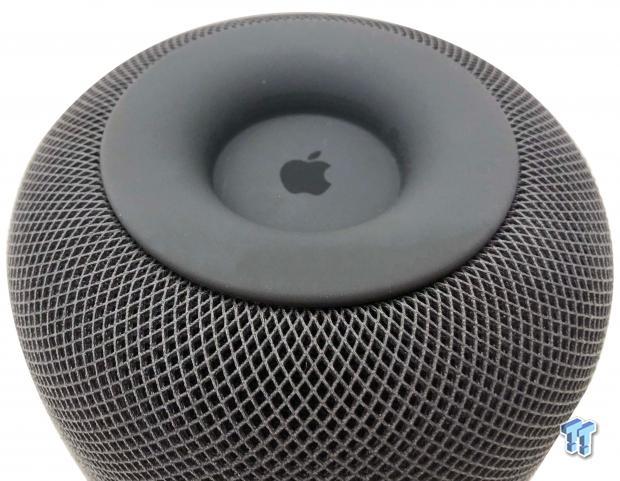 The bottom of the HomePod offers a silicon base with Apple branding.

HomePod setup is among the easiest I've encountered. Once the unit is plugged in and your iOS device comes near the HomePod you will see the screen above.

We then move through setup telling HomeKit the location of the HomePod.

As mentioned previously, you can choose to enable Personal Request.

Last, you can choose to transfer your iCloud settings to HomePod.

Once setup is complete, you will find HomePod in the Home app next to any other devices you may have setup. A hard press on the icon will move you into settings for the HomePod seen below.

Settings for HomePod are seen above and include music and podcast control along with Siri and location services.

Full disclosure, I've used Apple products since 2014. My first product, the retina MacBook Pro from Late 2013 came along as Thunderbolt 2 was introduced and we started testing storage solutions here at TweakTown. Since then, I have been through several generations of iPhone including 5s, 6p and 7p taking me to today where I use an iPhone X as my daily driver.

To this point, my audio history has included a mid-range Sony stereo system with floor standing speakers and for portability, I have used a few different Bluetooth speakers including a Philips BT2500 and recently Ultimate Ears Wonderboom. I have used digital assistants in the past including Siri via iPhone, Cortana via windows 10 and Alexa via Echo Dot.

It goes without saying that build quality is more often than not, going to be spectacular with Apple products. The HomePod is no exception as its built like a tank and on top of this the 3D mesh adds both an interesting tactile feel to the HomePod along with aesthetic appeal.

As a speaker, the HomePod is quite simply astonishing. For the longest time, I held out with no interest at all in purchasing a HomePod. That was until early June, when I visited an Apple store local to me looking for watch bands and phone cases and heard it for myself.

It really is mind-blowing what Apple has done with something as simple as a smart speaker. Taking the best parts of the Bluetooth speaker market and meshing it with its own digital assistant and services. The HomePod is loud with plenty of depth to the music that fills the room and for those wanting to take things further, stereo pairing with a second HomePod is nuclear.

On the flip side, the HomePod is not a Bluetooth speaker. In fact, android and windows users need not apply as you cannot even get past setup without an iOS device but for those already in the ecosystem or on the edge of switching, the HomePod gives you much more than an incredible speaker. With HomeKit via Siri and HomePod, you can have hands free control of your entire home by adding devices like switches, plugs and thermostats from a growing list of vendors.

The Bottom Line: While Apple has hit all of its marks on quality, sound and performance, Siri still needs work starting with improving voice recognition and accuracy.