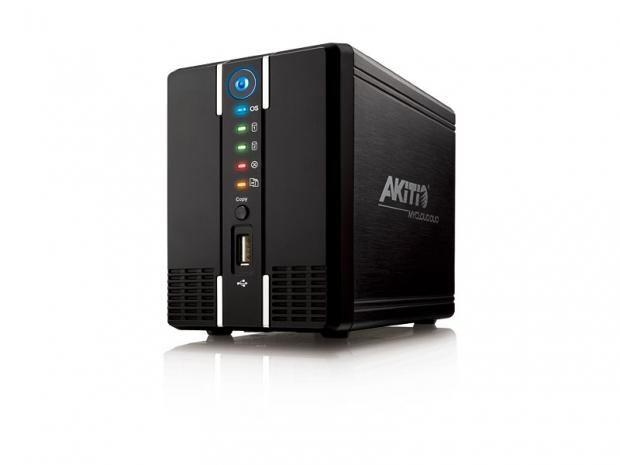 Thecus has done it, so has QNAP and Synology, but now easy to configure, web interface, personal cloud storage from your home has moved to very low cost NAS appliances. The Akitio MyCloud Duo is more than just a standard dual bay NAS server. With full DLNA, application server and now MyCloud web connectivity, the Akitio appliance is a full featured storage unit with several features previously found on units that cost several times more.

Like everything else in life though, low-cost means that corners were cut somewhere. The Akitio MyCloud Duo looks like a budget product. Most of the unit is made from steel or aluminum, but a healthy dose of plastic is thrown in. Also, as with many of these products we've looked at in the past, the data bandwidth to and from the device is limited, even if the spec sheet claims gigabit Ethernet support.

Let's dive in and see if the Akitio MyCloud Duo is able to beat the odds and supply the claimed bandwidth and functions that make us look past some of the corner cutting shortcomings.

The specifications list is certainly impressive with its massive list of features and functions. The duo part of the names comes from the dual HDDs that the unit is capable of holding. The unit will auto configure the RAID to RAID 1, full protection of your data, with just two clicks. During the RAID configuration setup you can select RAID 0, but we don't recommend that option, since your risk of losing data is increased.

The MyCloud Duo is stated to have gigabit Ethernet, but it'll be difficult for the 750MHz dual-core ARM processor to fill the pipeline with that amount of data. There is enough processing power to run a handful of background tasks, but the 128MB DDR2 DRAM is fairly small for a device you are asking to handle your Bit-Torrent, FTP, and media server tasks at the same time.

Akitio has their own web portal for your mobile connection back to your data. The site is myakitio.com and it works similar to the MyCloundNAS interface that QNAP released and we wrote about several months ago.

The difference in price between the QNAP unit we tested and the Akitio MyCloudNAS is massive. We managed to find the MyCloud Duo online for as low as $143 in the US. We also found a reference to a $129 price, but the web page was down when we inquired. The unit does not ship with drives so you'll need to purchase one or two SATA HDDs to get it up and running. 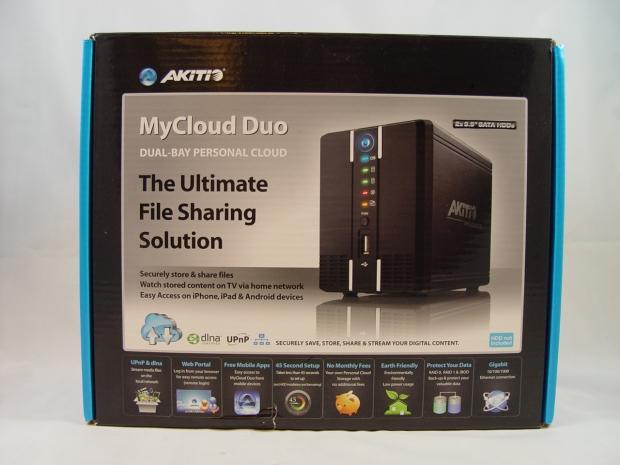 Akitio put together a nice retail package for the MyCloud Duo. Several of the features are listed on the front of the box and you get a nice image of the main unit. 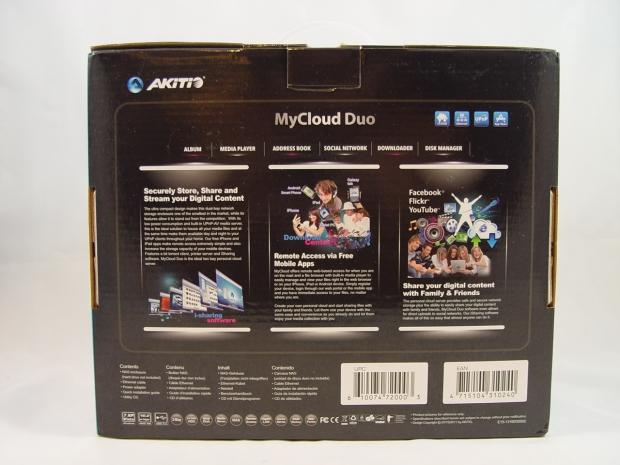 Several of the main features are listed in detail on the back of the package. 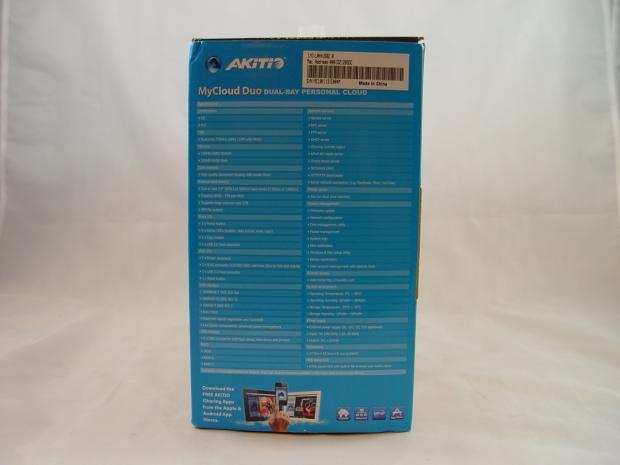 A features list like the one on the previous page is listed on one side of the box. 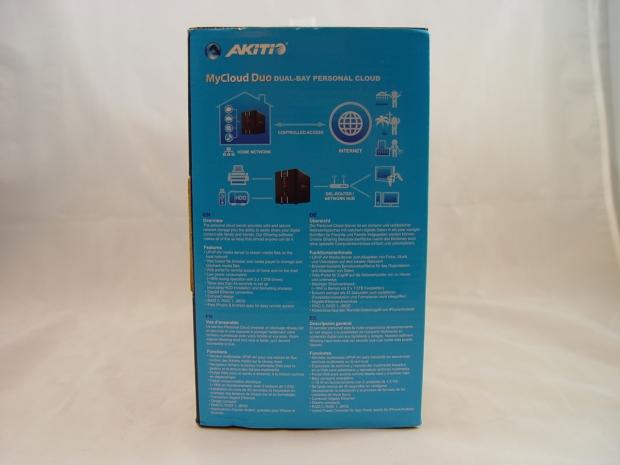 On the other side a nice diagram of a typical use scenario has a nice graphic. Another set of features are also listed. 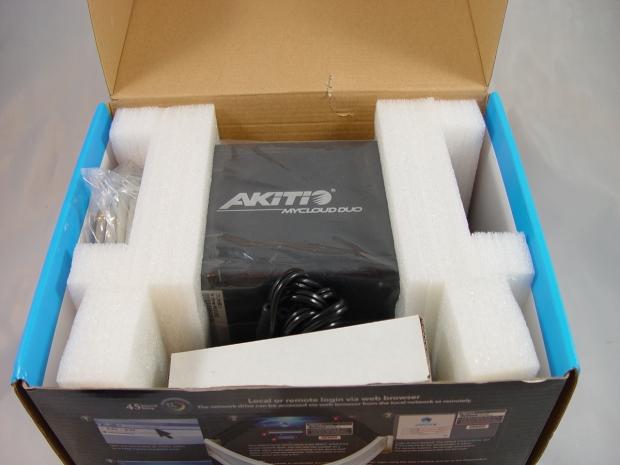 Inside we found a nicely packed NAS with the accessories kept in separate compartments from the main unit so there is little chance of damage during shipping. 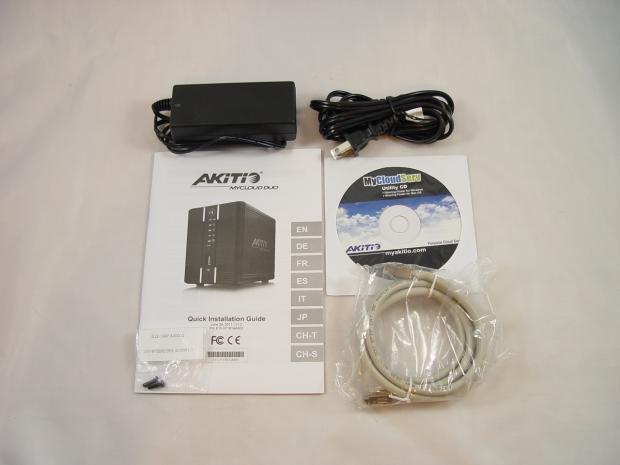 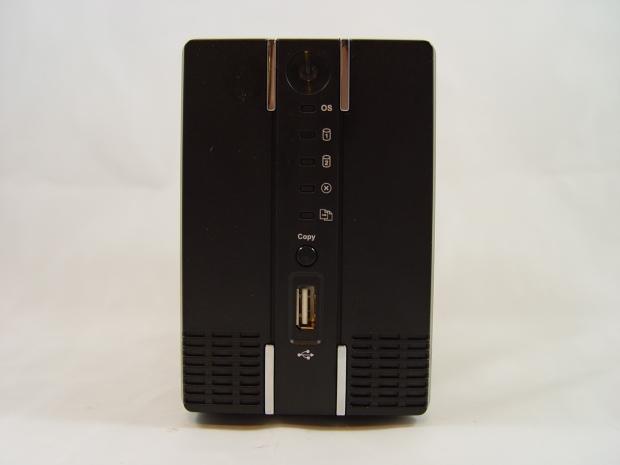 The main unit looks the part. It is thin with a very small footprint. This design is possible since the power regulation unit is external. The drives are not easily hot swappable since you need to unscrew the front panel to get to the drives.

On the front we found a power button that lights up blue when the unit is on. A number of other LEDs light up activity and status lights. Also, you can easily copy data from a USB device with the Copy button on the front of the appliance. 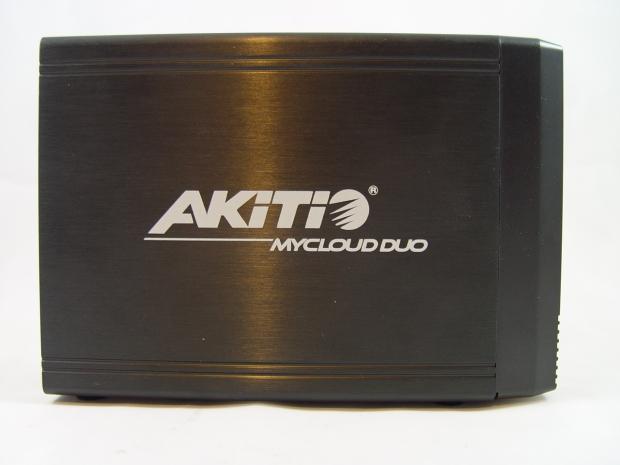 The side of the MyCloud Duo is brushed metal. 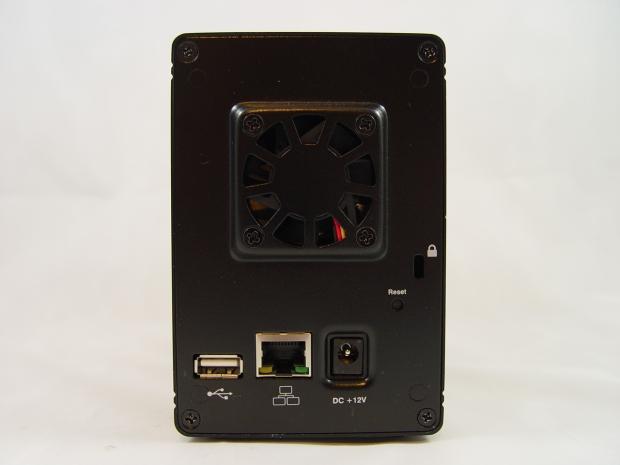 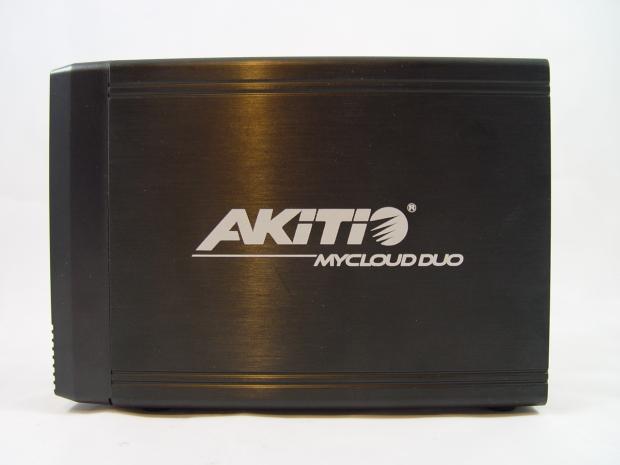 The other side of the NAS is identical to the first side we looked at. 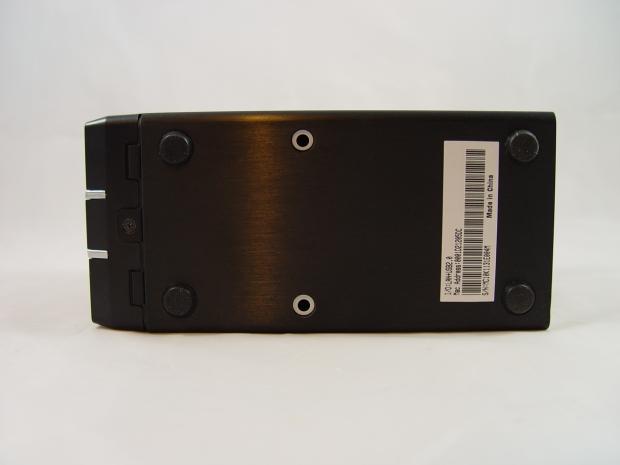 Under the NAS we see the four rubber feet that keep the unit from transferring vibration from your drives to the desk. Here we also see the screw that must be removed to add or remove drives from the unit. The silver holes we see in the middle of the NAS are for securing your drive to the NAS. 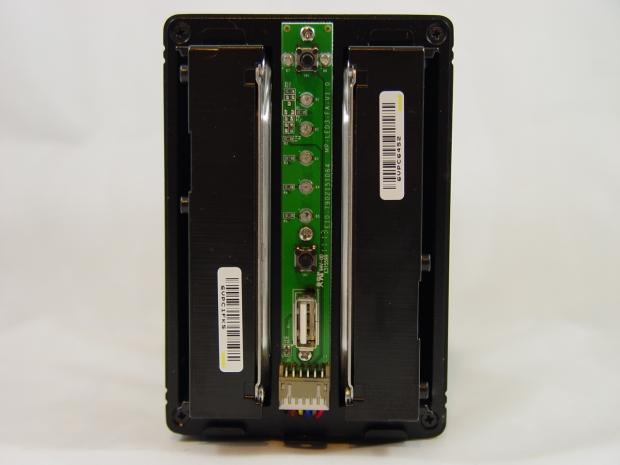 With the front cover off and drives installed we see how the drives fit inside the MyCloud Duo. 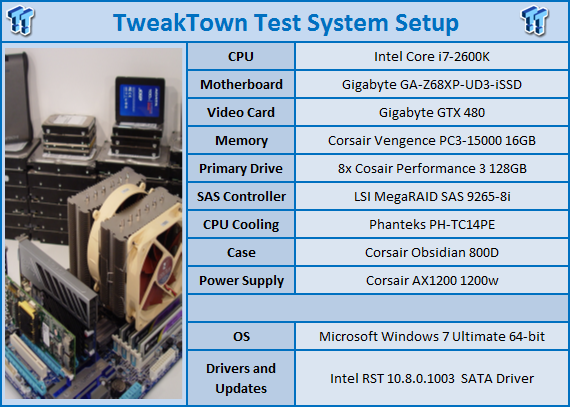 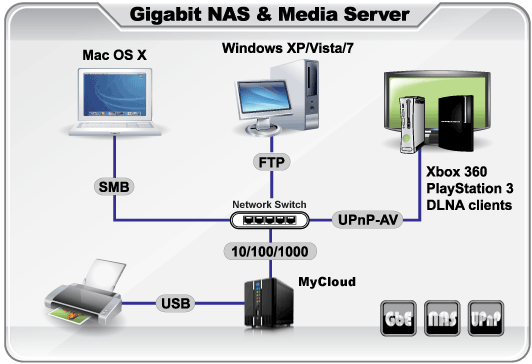 There are a couple of ways to use your Akitio MyCloud Duo. The first is on your personal intranet, inside of your router with your home devices. These are your typical NAS functions. 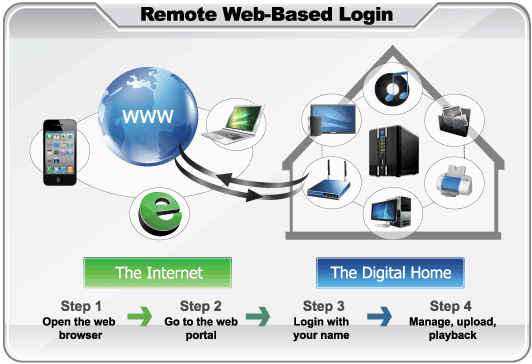 NAS servers have been around for ages and they have always been 'web enabled'. Their cloud functions were always tedious to setup since you needed to setup ports in your router, DNS forwarding and a number of other settings. You still need to set your router, but advances in router technology make the process easier. The NAS is even easier to setup with the configuration wizard. 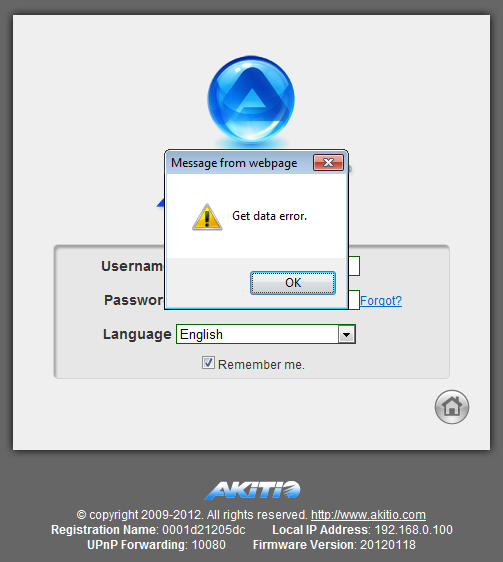 Getting into the system is supposed to be fairly straight forward if you know the IP address. Here you can see that right from the start the MyCloud Duo didn't like playing nice with us. This was an intermittent issue. We'll discuss it in more detail later in the review. 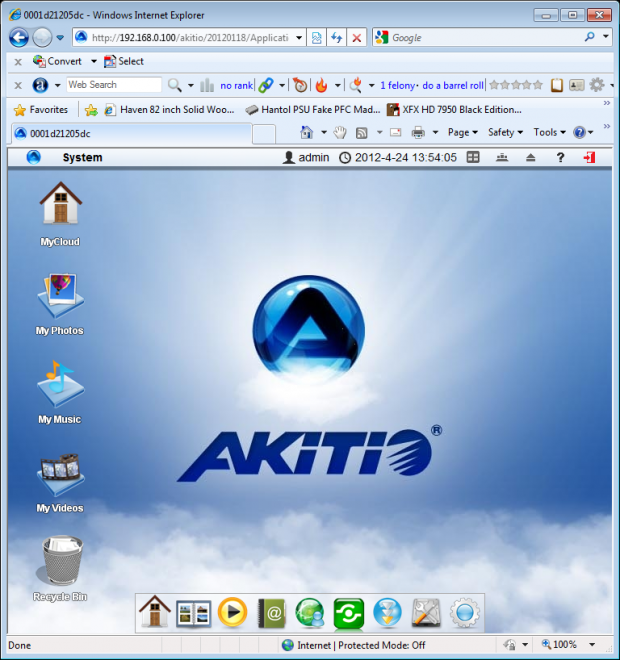 Once inside the NAS you have a decent user interface, but it is fairly slow and you have to poke around to find what you want. This is a lot like the interface you also get when connected via the cloud. 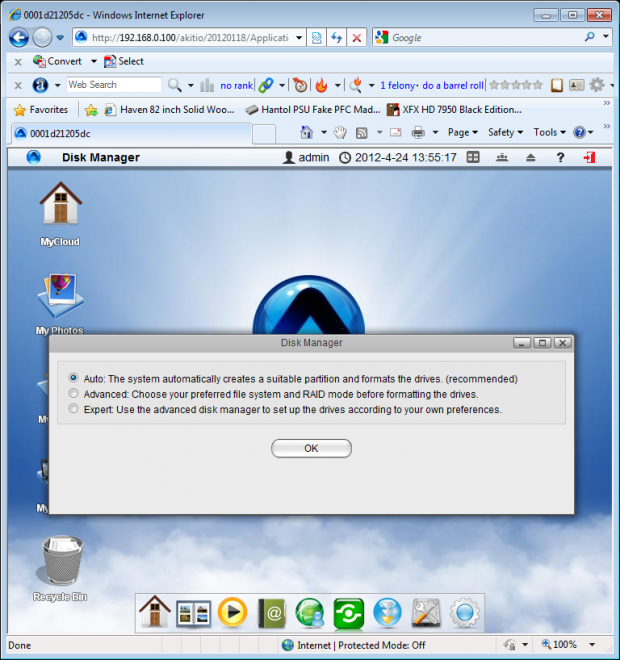 Setting up your array is straight forward and easy. We chose to just use the AUTO function since we wanted redundant data. The NAS did take a very long time to perform the array build, something we didn't expect from a two drive, RAID 1 array. 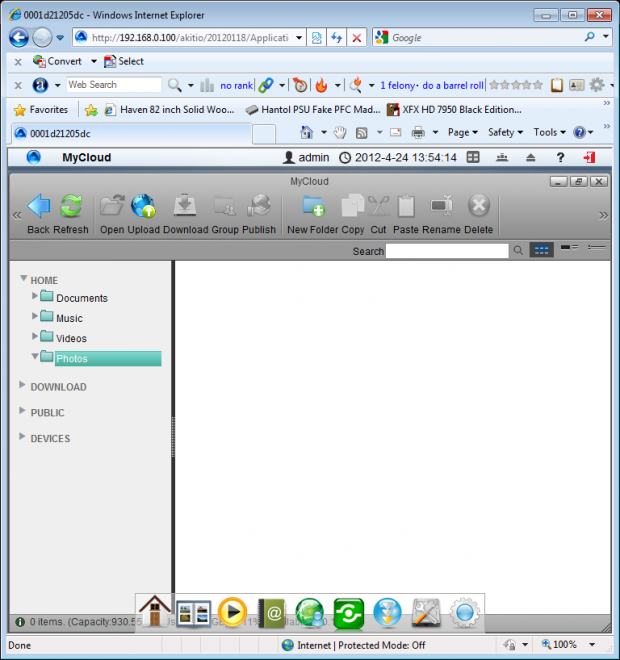 Once everything was configured, programmed, arrays built we were able to spend time with the user interface. One thing we didn't like though was not having the ability to drag and drop to the interface window. Most NAS appliances don't allow you to do that either, but most are not built so heavily around a web interface either. 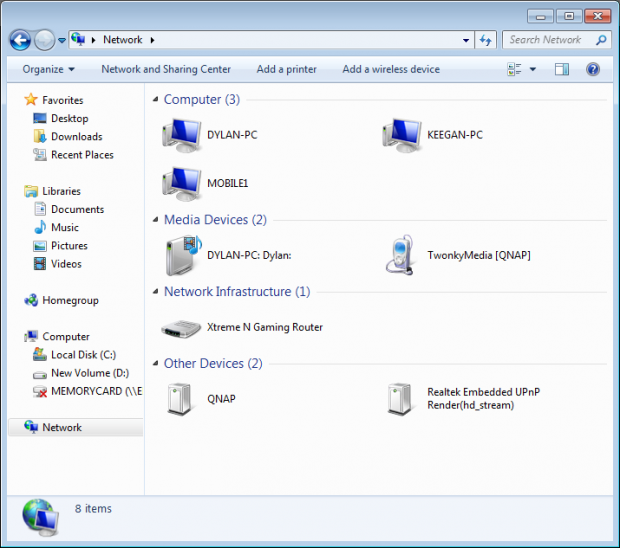 My Network Places wasn't much of a help either as the MyCloud Duo rarely appeared here. From time to time it did show up. We ended up just mapping a few folders in My Computer so we could access data and start our testing. 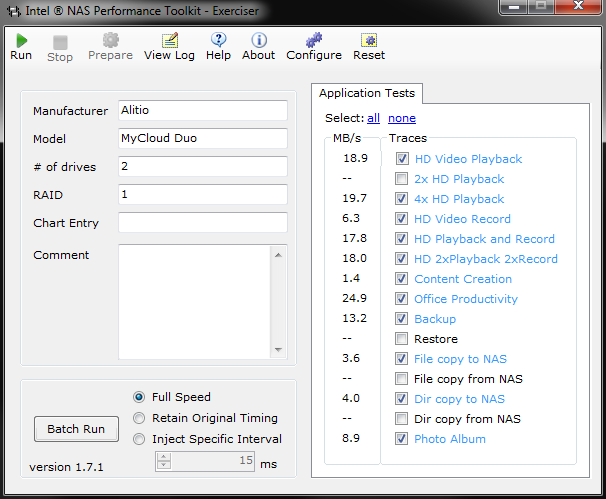 I photoshopped the results you see above for NASPT. There is nothing diabolical though, the benchmark results are accurate. The Akitio MyCloud NAS has issue when the work load gets intense and just drops off the network all together. To get around this issue we had to run every test individually so we ended up with 11 images that I condensed back into one. In the tests that you see blank the Duo failed to complete the task resulting in us not achieving a score.

This drop off the network behavior led us to countless hours of trouble shooting, looking for firmware updates, checking cables, routers, switches and such, but regardless of what we changed, the problem was the Akitio device and nothing else. The Akitio device was tested in the same way all of our NAS servers and with the same cables, components and test systems.

When it comes to benchmarks we were able to perform the MyCloud Duo was quite a bit slower than what we expect to see on a device that claims gigabit Ethernet speed. 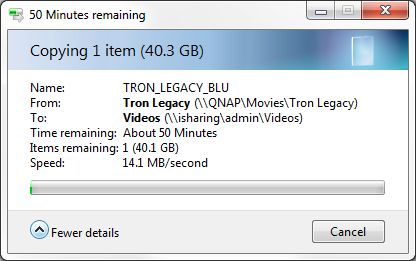 Transferring files to the MyCloud Duo takes place at just under 15MB/s. We were able to transfer DVD size files easily and without issue but... 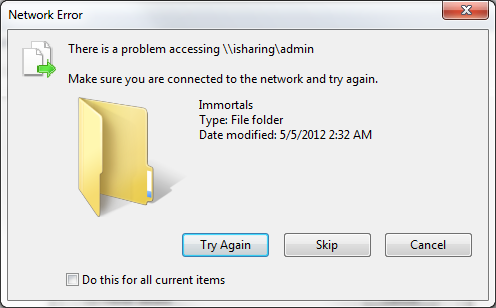 Transferring any Blu-Ray ISO to the MyCloud Duo resulted in the NAS dropping off the network. It didn't matter what Blu-Ray ISO we tried or from what source. 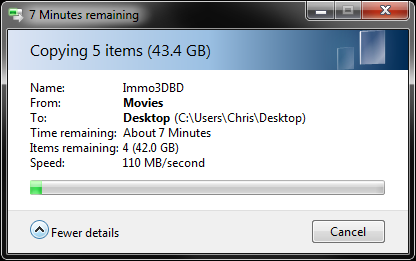 To check our configuration we swapped cables around and used our house server on the cable / port that the Akitio was on. The result was a nice steady transfer that held a steady 100 to 110MB/s. These are true gigabit Ethernet speeds and the Akitio MyCloud Duo only gives you around 10% of that performance, when it actually works properly.

Our experience with the Akitio MyCloud Duo was miserable and that comes just from the performance and user interface. Once you add in the dropping off the network, never being able to hit the NAS hard with file transfers or the intermittent "it just isn't there" problems, you can understand why we would recommend you stay far away.

Even if all of these low level issues were fixed that still leaves the file transfer performance. If Akitio didn't claim gigabit performance, we wouldn't really care so much, but 1000mb/s is available on nearly every NAS on the market and the Akitio can't get anywhere near those speeds.

On a positive note the price is only around $150. Then again you might feel like you wasted $150 if you get a product that performs and behaves like the review sample we received. 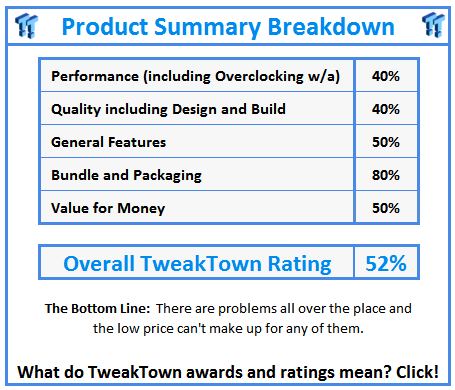