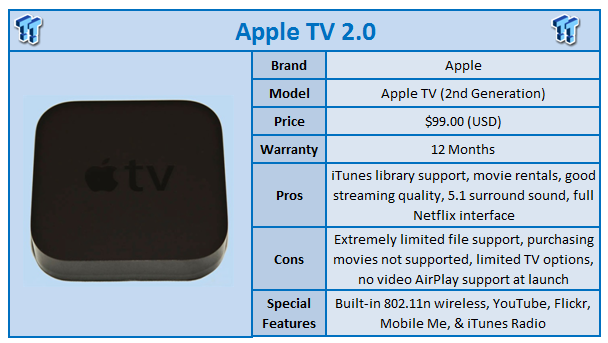 The Apple TV (somewhat rebranded now as iTV, but still being sold under that moniker) first arrived in home cinemas over three years ago, a curious oddity in a market torn between competing HD standards (Blu-ray and HD DVD). It had no support for either of the optical formats, and instead relied on an internal hard drive and streaming from a home PC running iTunes. Unlike the optical disc formats, the Apple TV was limited to the barest minimum of HD resolution; 720p. It was also very stringent on what types of digital media it would support (essentially, if you can't play it natively on an iPod, iTouch, or in iTunes, it won't play on the Apple TV either). Even with these limitations, the device sold very well and encouraged Apple to radically revamp the design in certain ways for its next generation release.

Apple TV 2.0 drops the internal hard drive (which ran as high as 160GB in size) in favor of 8GB of internal memory for buffering purposes. In return, the device is much smaller, about the size of a paperback book (though about a third shorter). While the original Apple TV had component and analog outputs, this new model gives you a HDMI port and optical out. That's it. Personally, I think that's a good move on Apple's part, but if you're (for some reason) still interested in component/analog connections, you won't want to upgrade. There's also an Ethernet port (for wired connections), built-in 801.11n wireless, and a USB port. Don't think for an instant that the USB port means you can hook up your own drive-based storage. It's only there for service and support purposes. Perhaps jailbreaking the iTV will one day allow for such a function, but as of now the port is entirely useless to you.

Booting up the Apple TV for the first time prompts you to choose your desired interface language (English, naturally), and then it asks you if you want to send performance statistics back to Apple. Just answer those two questions and you'll be met with the main menu. As this is called the "Apple TV", it's no surprise that the first menu items list the movie options, with a top listing of artwork that shows the top rentals from iTunes. 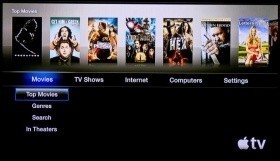 Navigating around the iTV interface is easy for anyone who has used a classic iPod; the control wheel scrolls through options with a middle button that makes selections, while the menu button will back up or return to the very top menu (if held down for a few seconds), and finally a Play/Pause button. It's very simple and easy to use, and the remote itself is very responsive to commands. Every menu item lists the most viewed (or listened to) items at the top, so if you find yourself constantly watching or listening to the same movie or album, it's within quick reach. 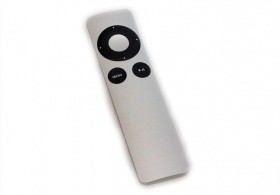 The Television option allows you to browse through the TV show rentals, and iTunes has a decent selection, but as far as streaming options go there are only four networks with such offerings (ABC, Disney, Fox & the BBC). When it comes to purchasing shows you have far more options, but the iTV doesn't allow you to make purchases. If you want to own an episode or movie rather than rent one for streaming, you have to do it from iTunes proper. This is somewhat understandable as the iTV only has 8 gigs of space, but having a purchase queue up in your iTunes downloads would have been nice. The quality of the video looks great, and some even come with 5.1 channel surround sound, but the technology is still lagging behind the quality found in Blu-ray discs. If full 1080p video and lossless audio is something that you want, you'll need to stick with the optical disc format. Movies and TV shows on iTunes top out at 720p in resolution and the surround sound audio is usually the same kinds of tracks found on the older DVD format. 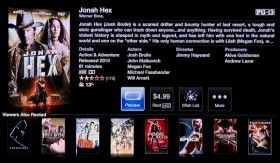 Netflix connectivity is the absolute best I've seen so far. Rather than using the typical interface that has come with every player I've seen so far, this Netflix integration is seamless with the interface of the Apple TV and allows you to browse the entirety of the "Instant Watch" library. There's no Instant Queue necessity here like in other set top Netflix implementations. You can still access your queue (and though some have complained of the "wall of titles" that typifies this view, I didn't have a problem with it), but searching through Netflix is a breeze and the quality is just as good as ever. The YouTube implementation also follows along the same lines. 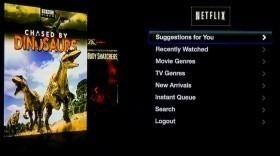 The last big service that the iTV offers is streaming content across your home network from your iTunes library to the device. This works perfectly well in practice, though the issue of having to use iTunes to share your library is a big limitation. First, if your iTunes isn't running, the service doesn't work. In fact, your computer won't even show up on the list. Second, this makes it difficult to share media from an external drive. Using a DNLA-enabled player, I can hook up an external drive full of MP3s and share that along with whatever other media I'm sharing from my desktop. Under the Apple TV, this is simply not an option. To share a different set of media you have to open the iTunes library and then you lose access to whatever is currently on your desktop. And switching between iTunes libraries is not an easy option that a typical user might be comfortable with. Even so, this sort of scenario isn't very typical, so the problem would most likely only affect power users in the first place. 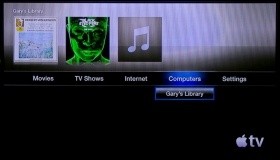 Users with an iPhone/iTouch can install the nifty "Remote" app that will allow you to control the iTV on your device. For navigation it's not really that much better than the bundled remote, but for searching it's a godsend as it gives you a full keyboard to type in key words. The iTV also supports AirPlay, which will allow you to send media that you are playing on your device to your iTV in seamless fashion. At launch AirPlay was only compatible with audio files, but video file support will be added in November of 2010. I would have liked to be able to test this function out, but I have an iPhone 3G which is still under iOS3 (due to performance issues) and the AirPlay function requires iOS4. I also have an iPod Classic which doesn't support this feature.

So who is the Apple TV geared toward? If you're looking for a good Netflix interface for your television, the iTV has one of the best I've played with so far and it's exactly as expensive as practically any device you could purchase for that purpose. If you have a lot of content on iTunes, then it's also great for streaming music and movies/television from your computer to your television and audio system. For those with a DVD/Blu-ray collection or who backup their movies to formats that aren't in Apple's narrow list of support (such as Xvid or MKV), there's not much that the iTV will help you with. Ultimately, I see very good things in store for the Apple TV as both Apple and the jailbreakers have their way with the hardware. If it suits your needs, the Apple TV 2.0 is a simple, easy-to-use device that can give you a leg up on consuming media in the digital world.