If you have seen Iron Man 2, you remember the scene where Tony Stark commandeers the televisions at the Senate hearing with his futuristic smartphone.

Well folks, that is actually possible today. With Actiontec's ScreenBeam Mini2 featuring Intel's WiDi (wireless display) technology, you can transmit HD video and even audio to any device with an HDMI port. 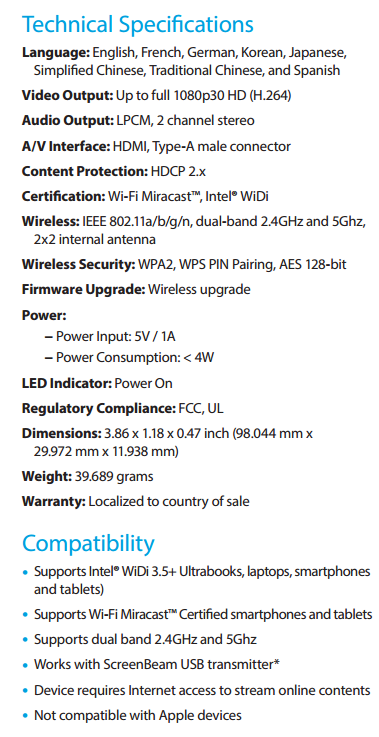 With WiDi v3.5, Intel introduced Miracast support, which basically uses direct Wi-Fi signals to communicate between devices, this added compatibility with a much larger pool of devices including many smartphones.

The ScreenBeam Mini2 supports v3.5+ including both Miracast and WiDi standards and comes in a small compact package akin to dongle. It is powered through a microUSB port and connects to any device through HDMI. 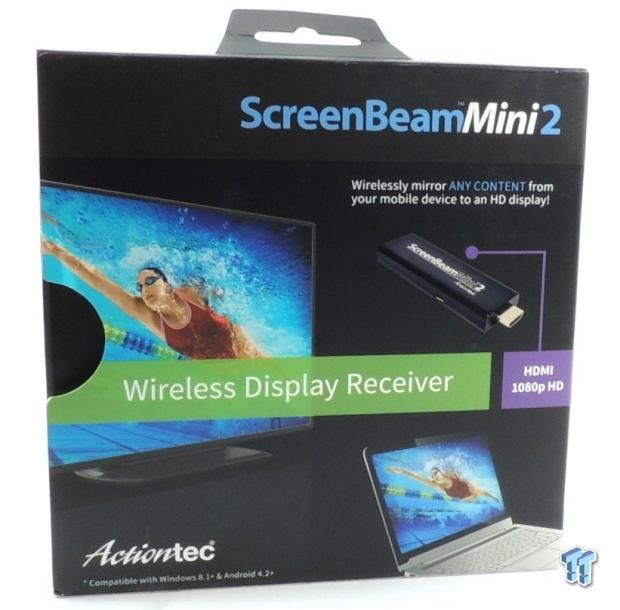 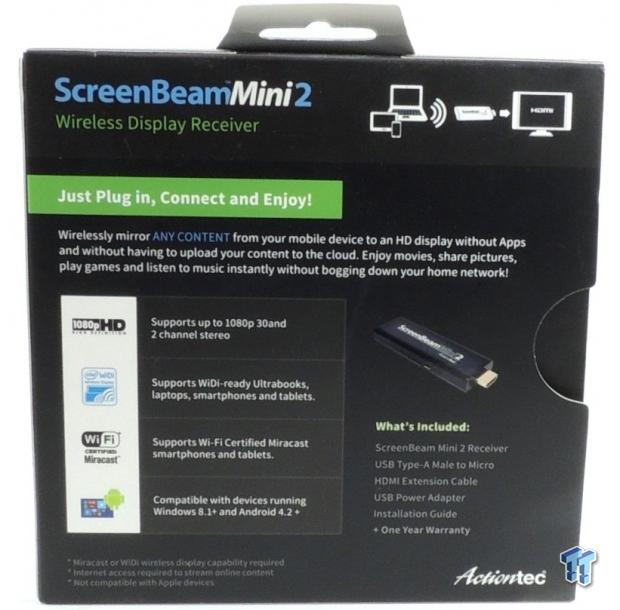 The packaging is solid and displays all the product highlights. The ScreenBeam Mini2 is a receiver, so you will need a transmitter such as a notebook with WiDi or a phone with Miracast. 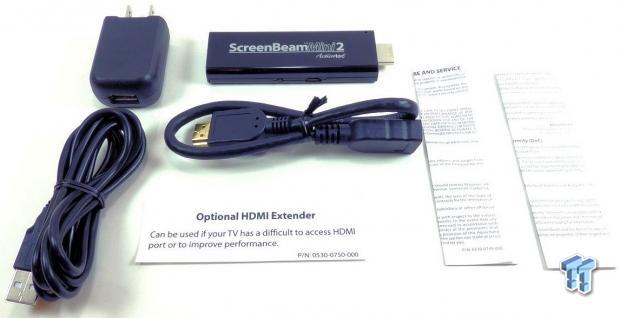 The package comes with everything you might need including a long micro USB cable with AC adapter for power and a small HDMI extension cable for hard to reach HDMI ports.

PRICING: You can find the Screenbeam Mini 2 Wireless Display Adapter for sale below. The prices listed are valid at the time of writing but can change at any time. Click the link to see the very latest pricing for the best deal.

A Closer Look and Operation

There isn't much on the device itself except a reset button. You must power the ScreenBeam Mini2 through its micro USB port, some TVs have them, but many don't.

Here at TweakTown we void our warranty so you don't have to! I am like Curious George, I always want to know what's inside the device, and the ScreenBeam Mini2 is no exception.

However, there isn't much to see here, everything sensitive is contained within shielding, and I wasn't about to unsolder the shielding from the board. You can get a glimpse of the receiver antenna in the PCB. 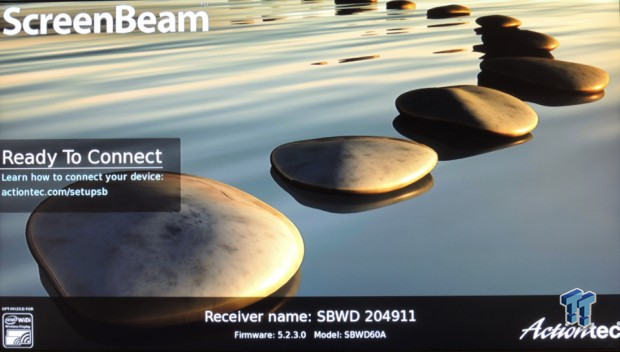 All you have to do is plug in the ScreenBeam Mini2 into the HDMI port on any TV and then switch the input on the TV to the HDMI port. I actually control this TV with my phone's IR transmitter so I used my phone to change the input. 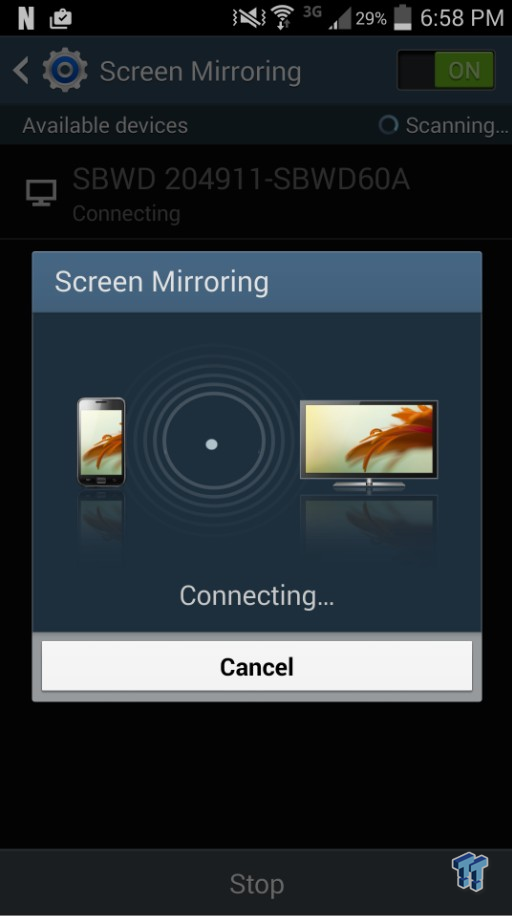 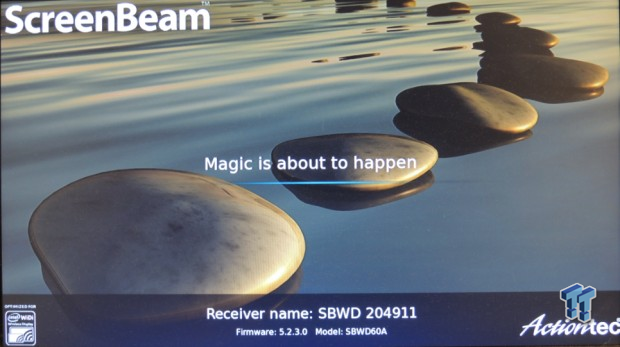 Once both devices see each other, the ScreenBeam Mini2 lets you know that "Magic is about to happen". 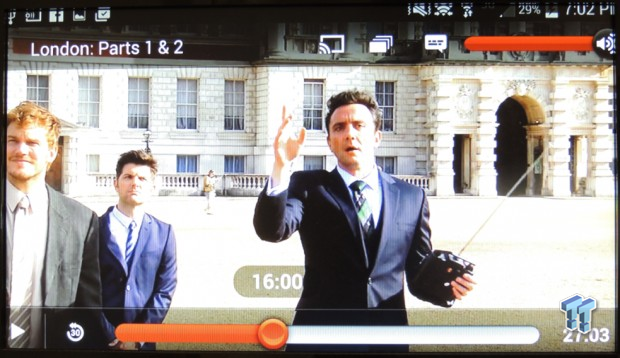 I decided to try Netflix streaming in HD. It worked. It worked well. You can almost see the HD quality in the photo of my TV. Audio came through very nicely as well. There was no noticeable lag between the phone and the TV like there was with early WiDi systems I had seen in 2011.

The ScreenBeam Mini2 provides Iron Man-like abilities to anyone.

I could literally plug this device into anyone's TV, use my phone's IR transmitter to change the input to HDMI, turn on screen mirroring in my phone, connect to the device, and commandeer their screen. However, I use this device on a daily basis a bit differently. The TV in my bedroom isn't smart, it can't stream Netflix or my Amazon movie collection, and this little device allows me to make it smart and stream whatever I want.

There are other devices out there that can make your TV smart, however, with the ScreenBeam Mini2, the transmitter is also the controller. You aren't limited to what streaming services the device supports; rather you are limited by what your device can play.

I was impressed by the quality of the stream, the video and audio both came through at the same time with basically no lag. I do lose the connection when I leave the room, and you need to reconnect again each time you come back in range.

For an affordable $39.99, Actiontec leads the way into the era of seamlessly transmitted HD video/audio with the ScreenBeam Mini2.

PRICING: You can find the Screenbeam Mini 2 Wireless Display Adapter for sale below. The prices listed are valid at the time of writing but can change at any time. Click the link to see the very latest pricing for the best deal.

The Bottom Line: Actiontec's ScreenBeam Mini2 performs just as you would expect. Its ability to take advantage of Miracast and WiDi means a larger pool of devices are supported and the latest in screen mirroring technology all in a small and affordable package makes for a solid product.