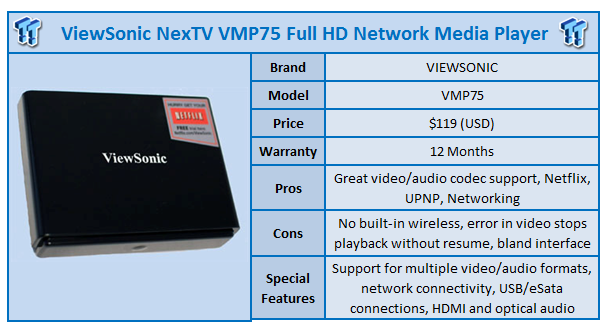 It's no longer necessary for an optical disc player to be the focal point of a home theater setup. Set-top media boxes, designed to play video and audio files either from a USB-connected hard drive or streamed across your home network are abound from such manufacturers as Western Digital, Apple, and D-Link. ViewSonic has debuted their NexTV VMP75 player, which boasts full network capability (wireless support comes via a USB dongle upgrade), Netflix streaming, loads of compatible formats, and even an eSata connector (a rarity in this USB dominated world). As sexy as that may sound, all those bullet points aren't very compelling if it won't play your media, so let's power up the ViewSonic player and see what we can throw at it.

The VMP75 is a small device, measuring a mere five inches (12.7 centimeters) in width and one inch (2.54 centimeters) in depth. The VMP75 supports HDMI and composite outputs for its video, and then HDMI, optical, and composite stereo for its audio. To keep things simple, I hooked it up via the HDMI connection to my surround sound receiver, which then piped the video on through to the television.

The first thing I discovered was that the VMP75 defaults to a video signal of 1080 60p, which my television had problems with. The picture would blink in and out a handful of times before going black. I had to quickly change to the settings menu and lower the resolution to one that was more supported by my HD television. This immediately took care of the issue and I didn't have any problems after that, but for safety's sake, perhaps the VMP75 should default to either 720 60p or 1080 60i.

The main menu is very Spartan in design and with the player hooked up to the network, the only thing it shows below the row of navigation icons is the current city and weather conditions. Options include browsing a USB/eSata connected hard drive, Netflix, web browser, Universal PnP/network connections, iMedia (with support for Live365, YouTube, SHOUTcast Radio and Flickr), a background music function, RSS reader, and finally the settings menu. The main screen also includes the current date and time, though the options for setting the correct time zone involve knowing how many hours you are off Greenwich Mean Time (aka Coordinated Universal Time), and I was too lazy to find out that that number was for the Central Time zone (hint: it's minus six) so the shown time was incorrect for me. Much like a blinking VCR, I suspect this will also be the case for a lot of potential users. 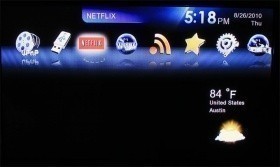 I first hooked up a 1TB USB hard drive, chock full of almost every kind of media file you can think of, and went to town. While the interface for navigating through the folders on the hard drive was clunky, the VMP75 did pretty well in this test, playing MKVs, AVIs, WMVs, MOVs and even FLAC files. It did not recognize the APE lossless audio file I threw on the hard drive for good measure, but I won't knock it for that given that APE isn't the de facto standard that FLAC is for compressed lossless audio. It had more of a problem with QuickTime MOV files, some of which it would play without a problem, and others would simply cause a "File not supported" error message to be thrown up on the screen. Strangely enough, I could never figure out exactly why a certain QuickTime file would play while another would not. Even among files that should have been encoded almost identically, one would play while another would generate a "File not supported" error. 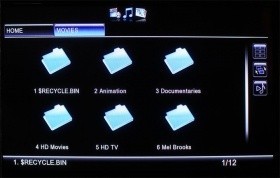 Playing back MKV files was also problematic. The MKVs themselves would start up just fine and looked fantastic (with support for integrated subtitles and secondary audio tracks in the OGG format), though as soon as any error was encountered in the file, the VMP75 would simply stop playing. Stopping an MKV with the stop button would always have the VMP75 ask if I wanted to resume when I selected it again, but in this instance I would not get that prompt, so recovering back to the point where the file messed up would require starting from the very beginning and having it skip ahead past the point where the error was in the file. I tried playing these problem MKVs on another player, and while the video would distort and playback would interrupt for a second or two, the player would recover and continue playing the file. The fact that the VMP75 cannot recover from errors in MKV files is a major disappointment.


Next I used the Universal PnP support to stream files from my desktop PC. I didn't have the wireless dongle, so I connected the VMP75 to my gigabit switch via a very long CAT6 cable. The player worked flawlessly playing back Xvid/DiVX AVIs, QuickTime files and music files, but MKV files are not supported. This isn't terribly surprising since I have yet to encounter a player that could do this, but it would have been a nice coup if the VMP75 could have handled it.

Next up was the online options that the ViewSonic offers. First was YouTube, which worked fine, but had a rather clunky interface. The whole web browsing experience is a half-hearted affair which tries to marry the traditional computer browser look with an interface more suited to being run via a remote control. Pushing the directional buttons moves the mouse until you near a link, at which time the cursor immediately "pops" over to it. It was somewhat confusing and not entirely accurate all the time (sometimes you'd think you had it figured out how to get it to pop over to a link but it wouldn't do so). While it works, I've seen much better integration with those online services. I'm a big Pandora Radio listener, and I was disappointed that no option was provided for it. I even tried using the web browser to navigate to it, but manually inputting the URL took me straight to the Google homepage every time. 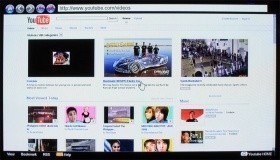 Netflix is a different story entirely as it is housed in an entirely separate application, which means there is a noticeable "shut down" of the VMP75 interface and then a launching of the Netflix interface. The Netflix app is identical to that of the Samsung BD-C6500 Blu-ray player, so I suspect I'll be seeing more of it in the future. It works just fine, but if you're looking for a player that allows you to search through the entire Instant Watch database instead of having to add desired content to your Instant Watch queue from your computer, then you'd better look elsewhere. 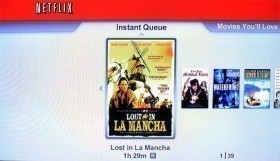 Then remote leaves a lot to be desired. The buttons are small, even for my petite fingers, and there is no backlight or "glow-in-the-dark" paint job to help figure out what you need to push to get what you want. Some of the buttons have odd secondary functions that make the layout even more puzzling. For instance, if you want to skip ahead to a point in a video, you push the zero on the numeric pad. Most other remotes I've played with have had this as a separate function or under the "Tools" (or something to that effect) button. Just finding the small white print that says "GOTO" underneath the zero button had me looking for a while. The "Stop" command is also poorly positioned in top middle of the last set of buttons at the bottom of the remote, quite a distance away from the "Play" button. 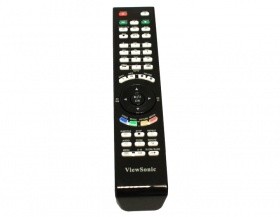 Despite the clunky interface, the ViewSonic VMP75 is a nifty little device that has a ton of audio and video codec support, and the Netflix streaming is nothing to sneeze at. Given its lack of robust error handling for video playback, however, it's a player that has one tremendous flaw. Unless the Netflix support has you willing to overlook the interruption in your viewing to reset problematic videos, it would probably be best to look elsewhere.