The first thing I have to make mention of before getting stuck into this review is that I haven't had the opportunity to have a look at any Team products before. While the company has been around for a while now and offers everything from high performance RAM to SSDs, this will be the first time having a play with some of their memory.

Having a look at the Team website, we can see three groups of RAM; the Value series at the bottom, above that the Elite series and sitting at the top of the food chain is the Xtreem series which is what we're looking at today.

In terms of DDR3 memory there's two series within the Xtreem series. The first is the standard stuff and the other is the LV series. Today we'll be looking at a PC3-12800 kit within that series. Currently the company offers two versions of PC3-12800; a CL7 set which offers a 7-7-7-21-2T setup and a CL6 set which we'll be looking at today. We won't go into details on the timings the kit offers just yet as we'll have a look at it in more detail on the next page.

So let's get stuck into the package that Team has put together before having a closer look at the modules. From there we'll have a look at how we went achieving the stock timings and if we had any luck when it came to overclocking before we check out the benchmarks and wrap everything up. 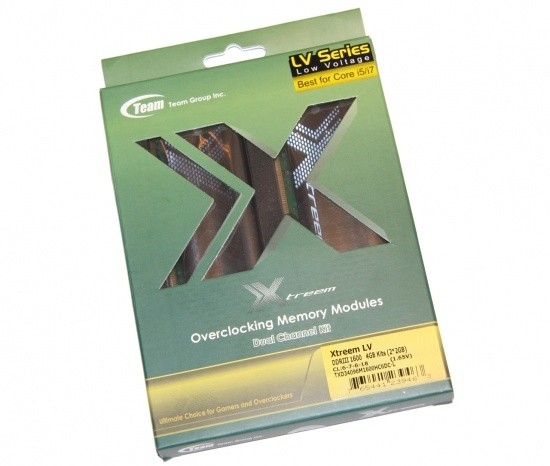 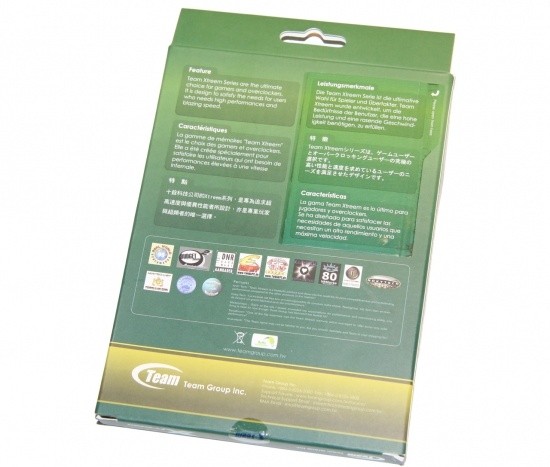 In typical memory fashion there's not a whole lot going on with the package. We can see a bit of the modules and across the top we can see that these are part of the Low Voltage series which is for i5 and i7 CPUs. We've got the main module details across the bottom of the package while the back gives us a run down on some of the features and awards.

Getting past the package and moving onto the modules, the first thing I have to make note of is the quality of the heatsink. While it's not too fancy, the feel to it is nothing short of perfect. It really feels like the team at Team has put together a really high quality heatsink which is great. 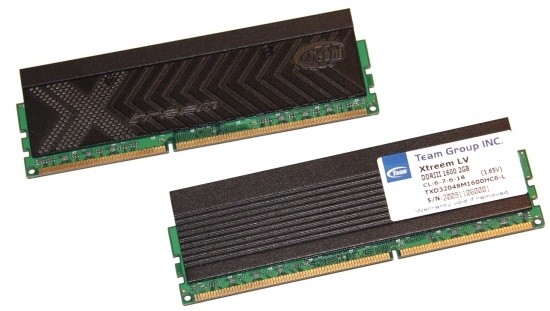 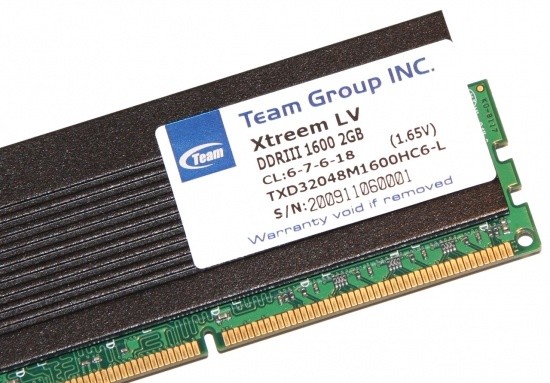 While one side has the Xtreem and Team logo embedded into it, the other has a sticker that gives us a run down on the modules. As you can see above, they're 2GB modules or 4GB kit that runs at 1600MHz DDR with the timings of 6-7-6-18 @ 1.65v. We've also got the model number and serial number here in case you're wondering on the exact modules we're using. 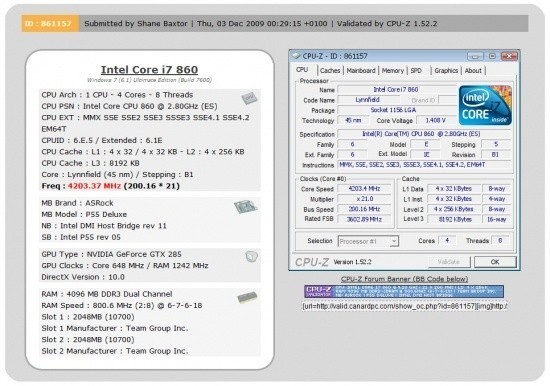 Since we had no issue with that, we took the time to see if we could achieve the same timings but move the command rate to 1T which is what most enthusiasts prefer to use. While we forgot to validate it, the modules didn't have a single issue running 1T. You can see the results for it in our benchmarks on the next page. 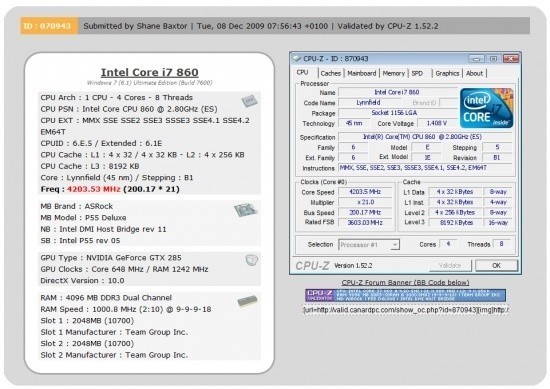 When it came to overclocking, we relaxed the main timings to 9-9-9 from 6-7-6. We then moved to the next divider which is a 2:10 one as opposed to the 2:8 one seen in the top CPU-Z validation. This gave us a memory clock of 2000MHz DDR and the good news is there wasn't a single issue running the modules at those speeds.


For our comparison today we'll have the Team modules running in the three different setups we achieved. The first is the stock timings; this is 1600MHz DDR 6-7-6-18-2T. The second is the same speed and timings except the command rate is now set to 1, making them 6-7-6-18-1T. Finally, we'll see how the modules performed at 9-9-9-18-2T at 2000MHz which was our overclocked speed.


Important Note: When modules are overclocked we adjust the BCLK which not only lets us fine tune the MHz out of a module, but in turn increases the overall CPU clock speed. While we always make the effort to include the BCLK and CPU Speed in our graphs, please just make sure that you make note of these when looking at the results. In some tests that don't purely test the memory speed, the extra MHz on offer from the CPU can increase the result. Of course, it's worth noting that having faster memory also gives you the ability to run your CPU at a higher speed. 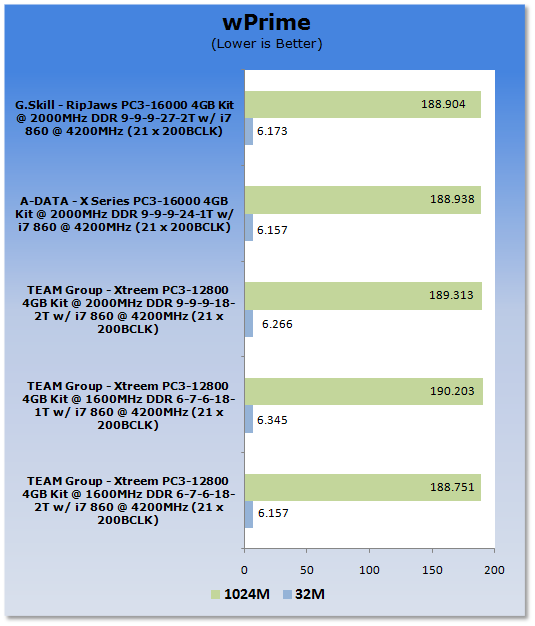 Across the board we can see there isn't a whole lot of time difference between all the setups. 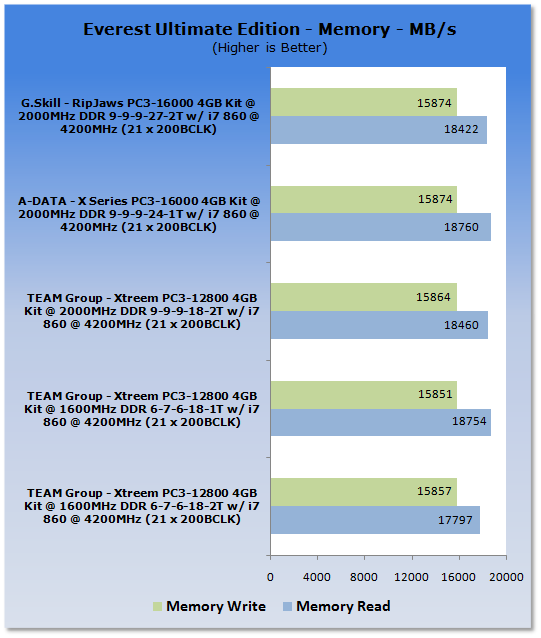 Having a look at EVEREST, we can see similar numbers across the board for all the different setups here including the higher MHz Team setup when compared to the stock 1600MHz DDR setup. 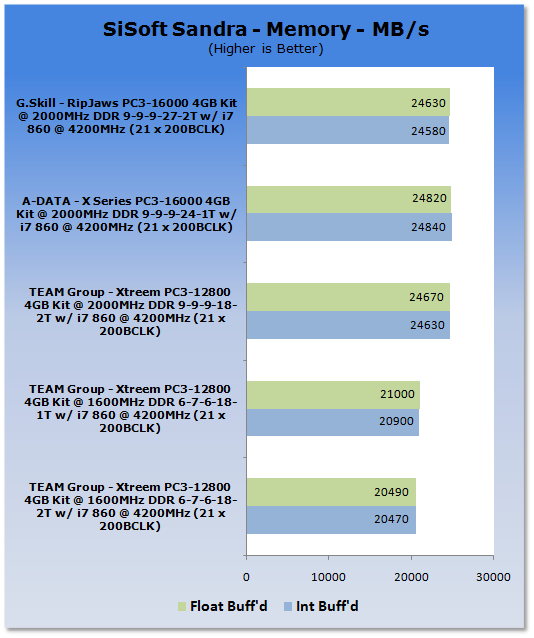 Looking at Sandra, we can see that when we move to 200MHz DDR there's a lot more breathing room for the memory and we can see a good jump in raw memory performance. 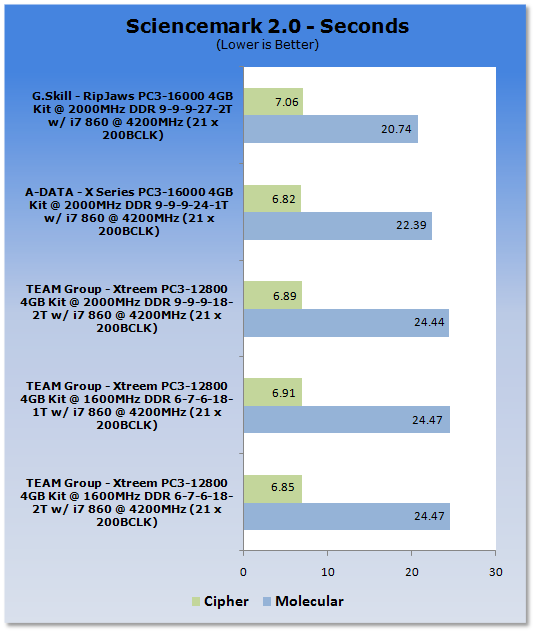 Under Sciencemark we can see that the kits sit a little further back when looking at the Molecular benchmark. Checking out the Cipher one, though, we can clearly see that all three setups score under 7 seconds. 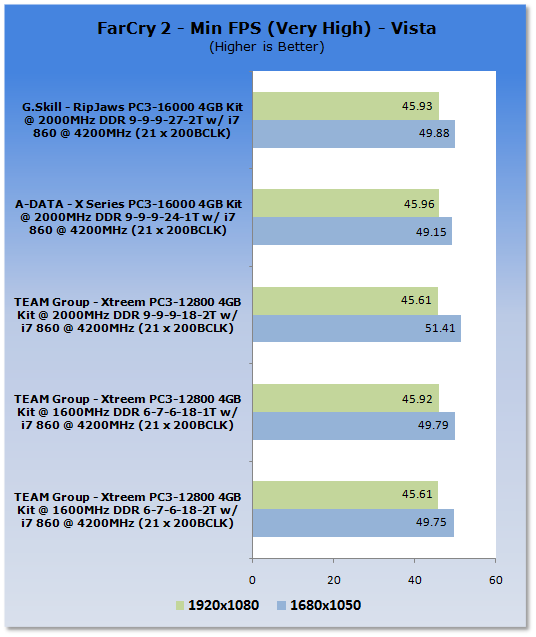 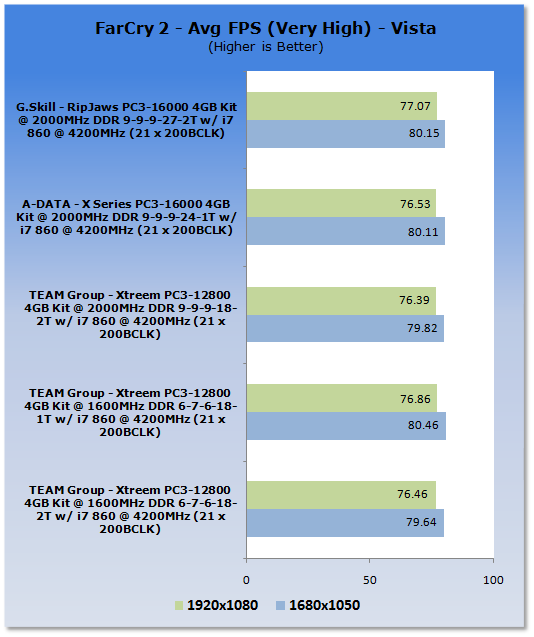 Across the board we can see that the numbers are very similar between all the different setups. That's mainly because when it comes to games the most important thing you want is more MHz on the CPU, this after first getting a faster video card of course.

Team has put together a really nice set of modules here. Not only does the quality of the heatsink feel absolutely top notch, there was some serious overclocking potential when we relaxed the timings.

What you might find yourself wondering, though, is what kind of user is going to want to buy PC3-12800 stuff? Well, if you're not looking at doing a whole lot of overclocking in the CPU and memory department, you're going to want to get the most aggressively timed modules possible.

With a 6-7-6-18 setup there's not a whole lot to complain about. While we could say that it's a bit of a pain that the company opted for a 2T command rate, we simply changed that in the BIOS to 1T and didn't adjust any other settings including the voltages and had absolutely no issue with the modules running.

The most important feature when it comes to memory is the MHz available on the modules. This is going to ultimately help determine your overclock a lot more than anything else. While there are so many dividers available these days, you still want to try and have the highest MHz possible when it comes to memory speeds. The good news is that if you eventually get the bug to start upping the memory MHz more, there seems to be some headroom here.

This is a great option for people who think they might overclock more a bit later down the track. For now you can have some aggressively timed 1600MHz DDR modules and later on you can relax the timings and start heading north. If you really catch the bug, you could then have a look at some higher MHz modules at default that are going to offer more aggressive timings.

Getting a hold of the kit in a country that sells Team memory isn't going to be a problem. The only thing that might be a problem is the price. Low latency memory tends to carry with it a higher cost and for less you're able to get 1866MHz or 2000MHz kits that carry with them much more relaxed timings. Value is ultimately going to come down to the user. If you want aggressive timings you're going to pay for it; the more aggressive timings also seem to mean that if we relax them we can get some serious MHz.

We've got a fantastic kit of memory here. Now you just need to decide if you want aggressively timed modules or something cheaper and more relaxed and maybe faster in the MHz department.