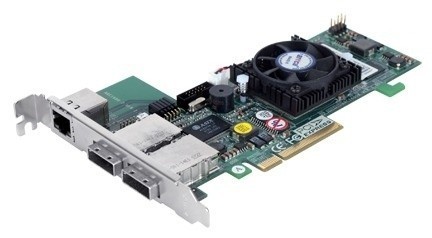 
For years enthusiasts looking to add a high performance RAID controller to their system have flocked to Areca Technology. Areca's reputation was built on their ability to design and sell controller cards that were able to perform very well, especially in RAID 0, an array type that is mainly used by computer enthusiasts since it is the fastest array possible. Areca is in a sense the underdog of the HBA industry; LSI and Adaptec both have a majority of their sales going to system integrators and Areca HBAs are mostly found in DIY computer systems.

A few weeks ago I started testing the iStorage Pro iT8SAE, a SAS enclosure that uses an Areca ARC-8020 SAS expander. This was my first run in with a SATA/SAS expander or for that matter any external SAS product. Most enthusiasts tend to use internal RAID controllers and I have done the same ever since SATA Ultra Wide.

The prosumer market is a different animal all together. Most of the A/V guys have drunk the Kool-Aid and are now addicted to their Mac Pros. The high end Macs don't offer a great deal of room for internal hard drives and even though products are on the market that allow more expansion, sometimes just using eight SATA HDDs doesn't cut it. This has lead to a many Mac inspired external drive systems to hit the market and many use components commonly found in PCs enterprise products.

The Areca ARC-1680X comes from Areca's line of low profile SATA/SAS controllers and uses the Intel IOP348 controller running at 1200MHz. The card interfaces with your system by PCIe 1.0 and uses 8 lanes. Cache is handled by 512MB of onboard DDR2 and it is not upgradable like Areca's flagship models. As mentioned previously, there are two SFF-8088 ports on the back of the controller and it will allow you to connect external SATA/SAS products to your system.

Not mentioned in the specifications above is the out of band Ethernet port that will allow you to manage your controller from another system. 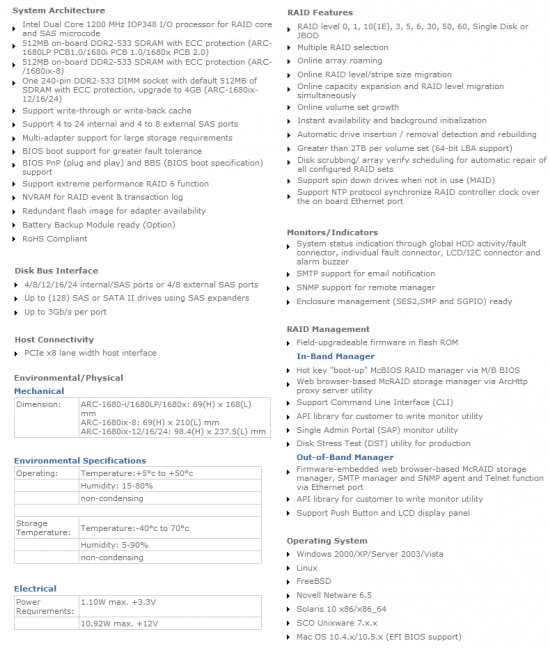 I was able to put together the above list of additional specifications and features for the ARC-1680X. For the most part the 1680X isn't that much different from Areca's award winning line of internal controllers. As you can see, several array options are present and all of the basics are covered.

Areca has enjoyed solid success in the aftermarket and you can currently find their controllers in several e-tail outlets. The lowest price I was able to find for the ARC-1680X came from Provantage and they have it listed for 549.57. In our review today we will be using the new LSI 9280-8E to compare to the 1680X and its lowest price online at this time is 688 Dollars from Buy.com, so the ARC-1680X costs quite a bit less as long as you don't require the next generation features that the LSI has to offer. 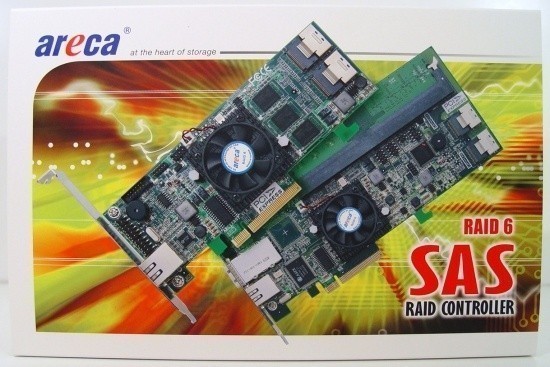 Areca has been using the same basic packaging for the last couple of years. We are pretty used to getting the same product pics on the front of the box.

On the side you can see where a sticker would be placed over the box to indicate which product is in the package. 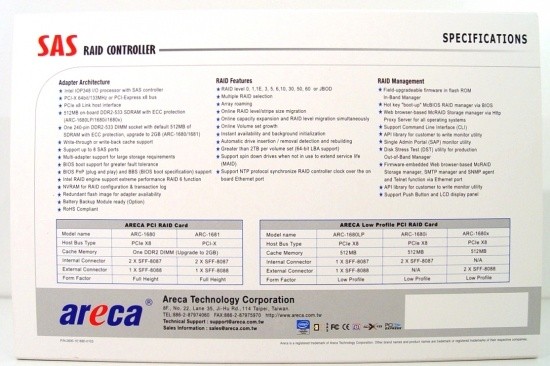 The back of the box lists specifications for each of the controllers offered. 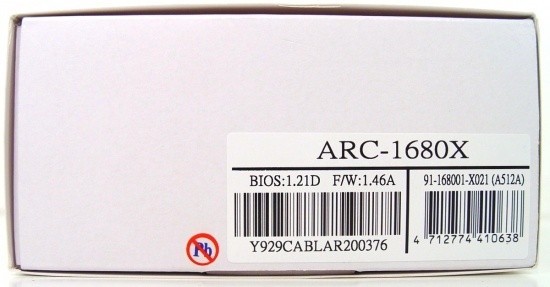 The side of the package is labelled with the product inside as well as the shipping firmware. 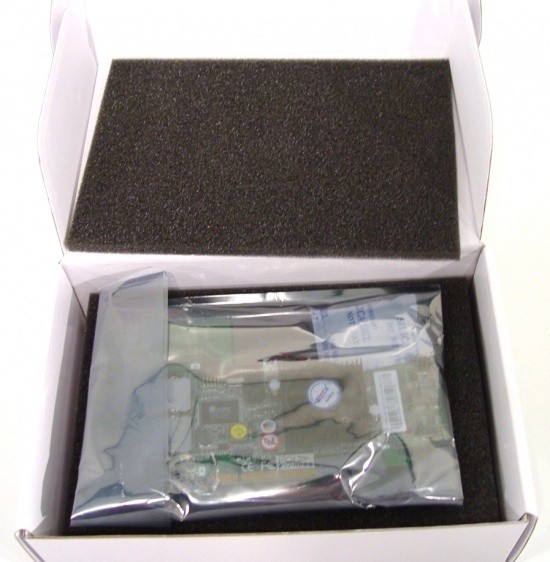 The internal packaging is pretty straight forward. Areca sandwiches the card between two pieces of open cell foam. The accessories and manuals are below in a separate section. 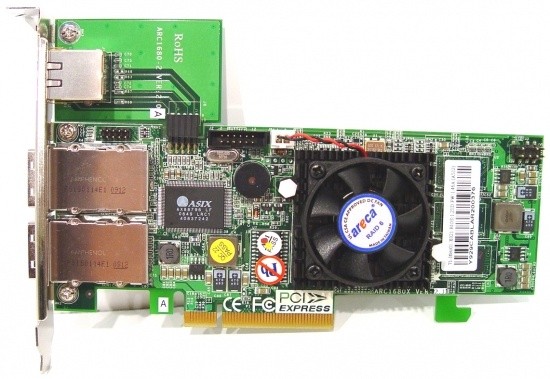 Here is our first look at the Areca ARC-1680X. The card is able to use a battery backup unit and the connector for it is on the top right side. The out of bandwidth management port is located on a daughter card at the top. If you are using the card in a low profile system with the included low profile bracket you will lose the ability to manage the card over the network with the daughter card. 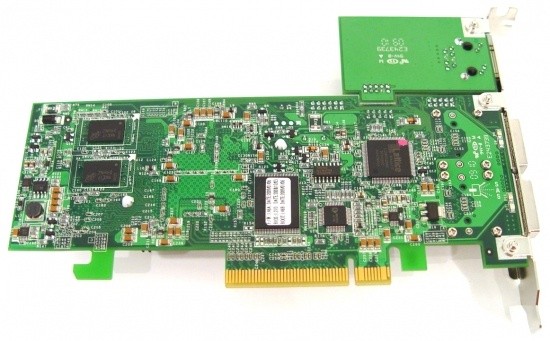 The back of the card is void of connectors or other user related features.

Here we see the SFF-8088 miniSAS data ports and the out of bandwidth management system. 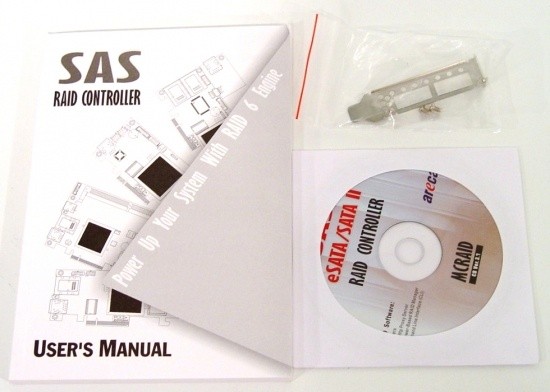 Areca includes an extensive manual, drive/software disk and a low profile bracket with the ARC-1680X.

Our original plan was to test the iStorage Pro iT8SAE with the new LSI MegaRAID 9280-8E SATA/SAS controller, but ran into an issue where the iT8SAE would not link with the controller. Since the 9280-8E is a new controller that runs native SAS 6 Gbps we thought it was a compatibility issue. After talking to both LSI, iStorage Pro and Areca we learned that this combination had yet to be tested and approved. Areca quickly volunteered one of their ARC-1680X controllers, a model that has been validated in the iStorage Pro and Areca's own test lab.

With the Areca controller in hand two days later, it was time to get back to work and get this system up and running in our lab. It became clear that the problem had little to do with the controller and we rushed out to get a new cable hoping that the main unit wasn't defective. The cable provided to us by iStorage Pro ended up being defective.

With the Areca ARC-1680X card on hand and the benchmarks already ran, we moved to the next step and started to review it.

Data storage was left up to the Seagate 15K.7; the fastest platter based hard drive on the planet at this time. Seagate graciously provided us with 8 drives to fill the system with. You can read a full review of the Seagate 15K.7 in this article that was published just a few weeks ago. 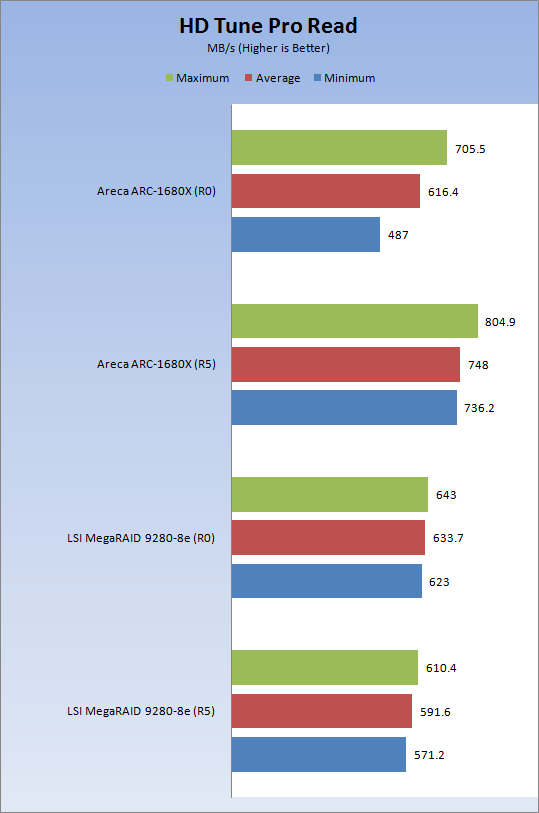 I have always enjoyed comparing two products to see where their strengths and weaknesses are. Controllers are designed to excel at specific tasks. Here we see the Areca ARC-1680X performing better in RAID 5 than in RAID 0. 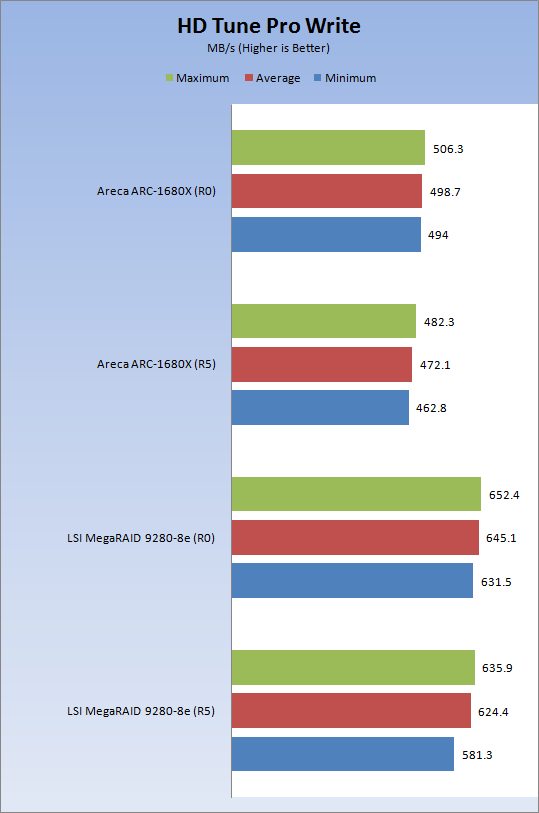 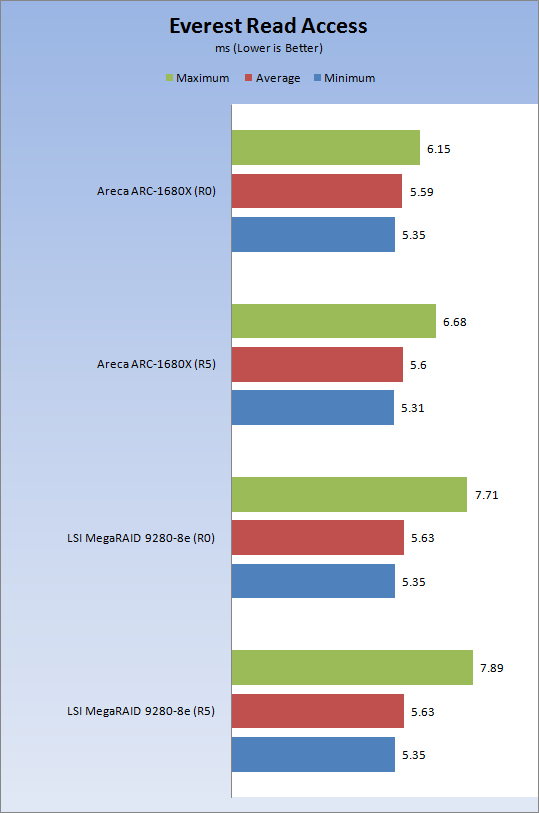 Our Seagate 15K RPM 15K.7 drives really do a good job of keeping the latency low with both controllers. 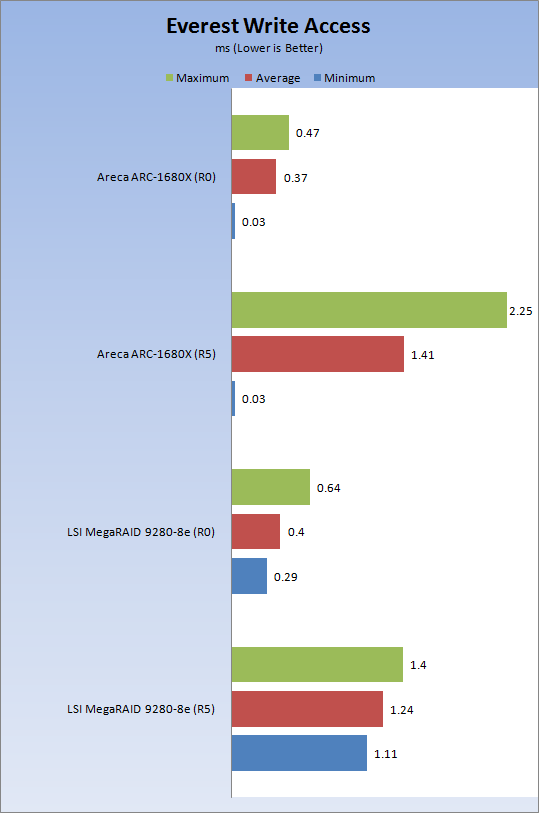 In RAID 5 the 1680X had a couple of small blips on the graph and it really hurt its average score.

In all tests the LSI controller was able to outperform the 1680X, but do the results justify the price difference for you? All of the results were very close. 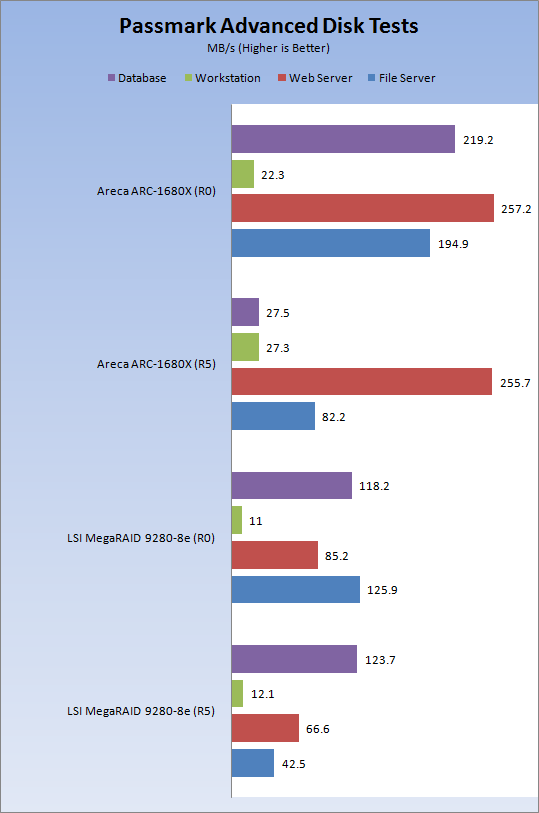 Passmark shows us how your choice in controller can affect your real world performance. Here we see that certain configurations are better suited for different needs. The Areca ARC-1680X was able to outperform the LSI controller in many tests by a 2 to 1 margin. 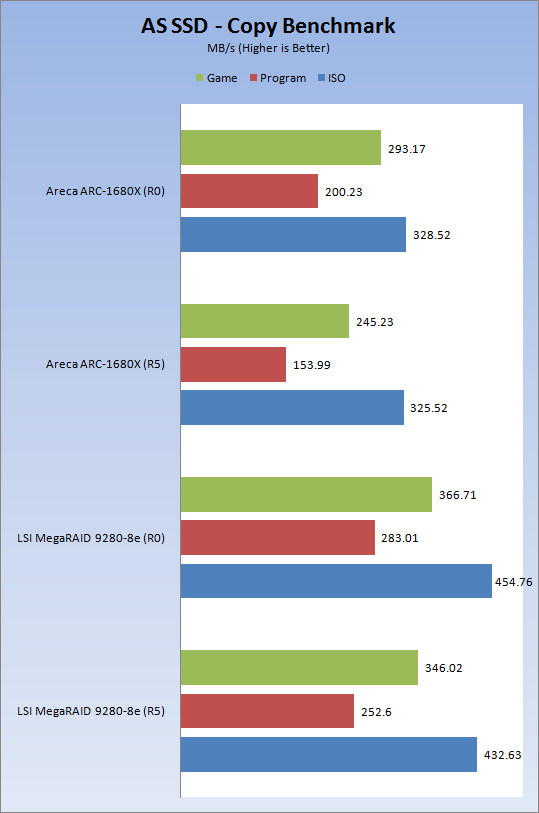 In the direct copy tests we see that the LSI controller is able to outperform the Areca ARC-1680X.

Areca has always produced great RAID controllers and the ARC-1680X is not an exception. One thing that has really stuck out in this review is how the controller performs in server specific tests compared to the consumer friendly tests. When it comes to the server tests the ARC-1680 really excels and even outperforms the LSI 9280-8E under identical conditions. We only tested both cards with one port since only one external expander system was available, but this is how most users will use the cards so we were comfortable with releasing this article.

The Areca ARC-1680X has a healthy cost advantage over the LSI 9280-8E, but the controller is now considered "old" in computer time. The newest release SAS controllers will all feature PCIe 2.0 connectivity and support SAS 2.0. It is because of this that we may be able to find some great bargains on the 1680 Series of controllers. Areca has yet to announce their next generation product line-up, but when they do the 1680 generation should see massive price drops. That savings matched with previous generation SAS drives like the Seagate 15K.6 will make it possible to build a very high performance enterprise class storage system for thousands less than it would have cost just a year prior.

There will always be those who demand the latest and greatest, but when it comes to the price vs. performance it is difficult to turn a blind eye to great technology that only has an imperfection with the date code.