The Promise DS4600 review was quite popular and even I was surprised at the number of people talking about it. Up until now we focused primarily on Network Attached Storage (NAS) servers, but Direct Attached Storage (DAS) seems to be a level that consumers are more eager to venture. There could be many reasons for this. DAS products cost less while offering many of the benefits of NAS servers. In this economy disposable income for many has been reduced, but the problems still remain; how is one supposed to keep all their digital files safe from mechanical failure?

AXUS Microsystems is a company that most of us are not familiar with. Their parent company is ASUStek, someone we have all come to know and love for many years now. I am a little surprised to see ASUS not launching storage systems under their own name considering the global brand recognition they have, but Shakespeare said it best; does a rose by any other name not smell as sweet?

Over time I am sure we can get used to the AXUS name, as long as they are able to deliver the same level of quality ASUS brings to the table. Let's have a look at the specifications of the AXUS FiT 500E. 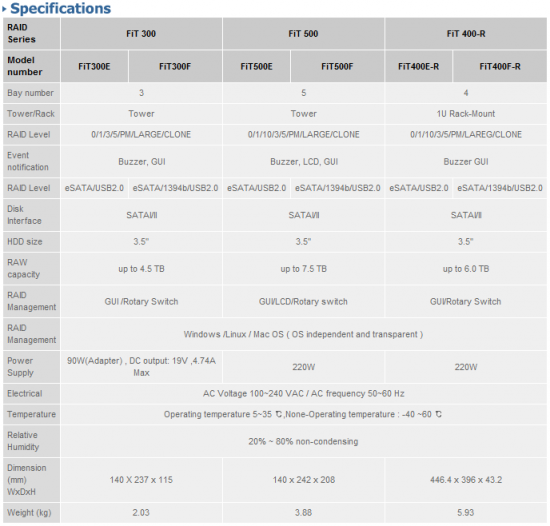 The AXUS FiT 500 is part of the FiT Series which consists of several different products. The 500E and 500F are nearly identical except for the addition of IEEE 1394b (FireWire 800) being included with the 500F. Today we are reviewing the FiT 500E, a five bay tower style direct attached storage unit that is able to connect to the host machine via USB 2.0 or eSATA.

Utilizing a maximum of five 3.5 inch form factor hard drives, the FiT 500E can run RAID 0,1,3, 5 and 10 as well as some special modes like Clone and Large. The Large mode is better known as Span on other devices and does not offer any data redundancy or performance increase. A majority of users should use RAID 5 over three or more hard drives for its data redundancy and performance increase over a single drive.

Like most other DAS systems, you are able to use Linux, Apple and Microsoft operating systems since all of the RAID activities are handled by the DAS controller. The operating system sees the DAS as a simple hard drive.

Pricing and availability is still a little skittish for the FiT 500E. In the U.S. only one e-tailer is carrying the unit, PC Pit Stop, and they are leveraging their position by offering it for nearly 500 Dollars, a full 70 Dollars more than the MSRP. This practice is so disturbing that we are not even going to link to the page, but hopefully over the next couple of months we will start to see more e-tailers carrying the AXUS product line. 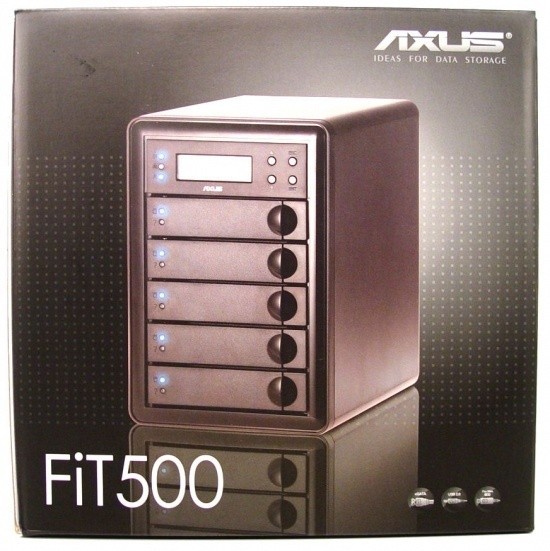 The front of the package has an attractive appearance and on the bottom right shows the types of data connections the system is able to use. 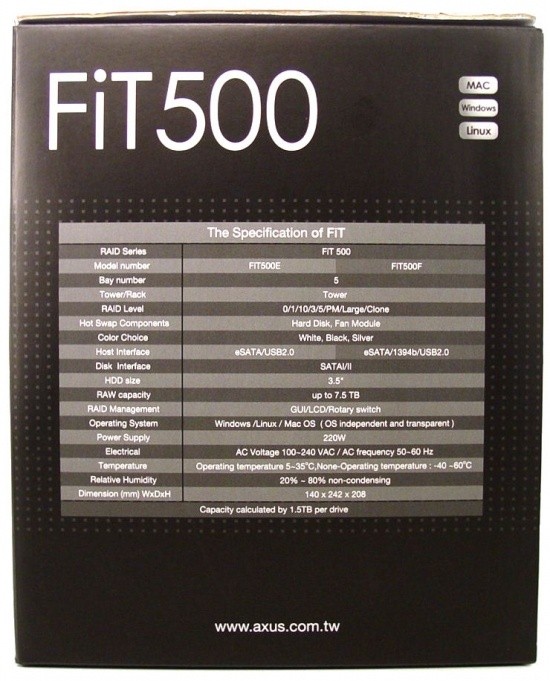 The full list of hardware specifications is listed on the side of the package. 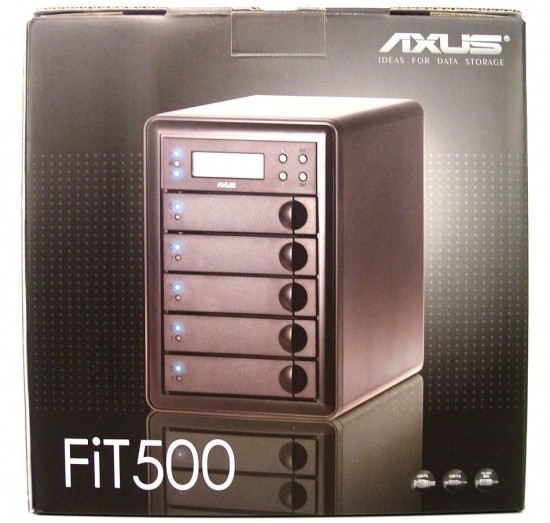 The rear side of the box is identical to the front. 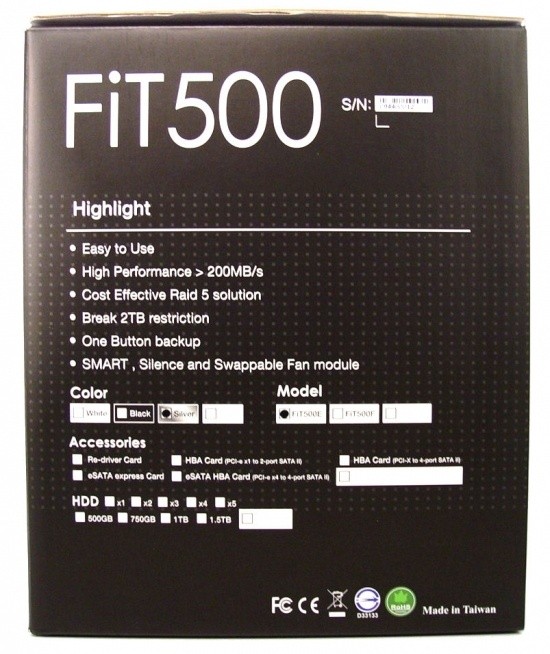 This side is where you can check the contents of the package. The FiT 500E and F use the same box and you can even get the DAS in white, black or silver. 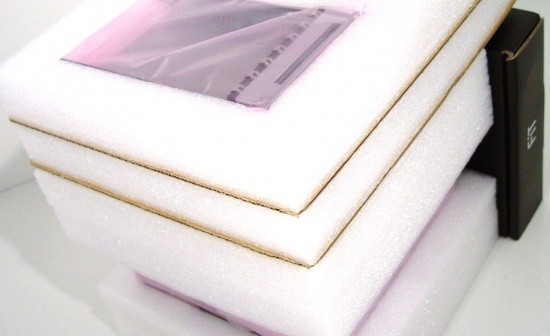 The inner packaging was the best we have seen to date for any NAS or DAS server. Here you can see that even the drive sleds are packaged separately from each other. 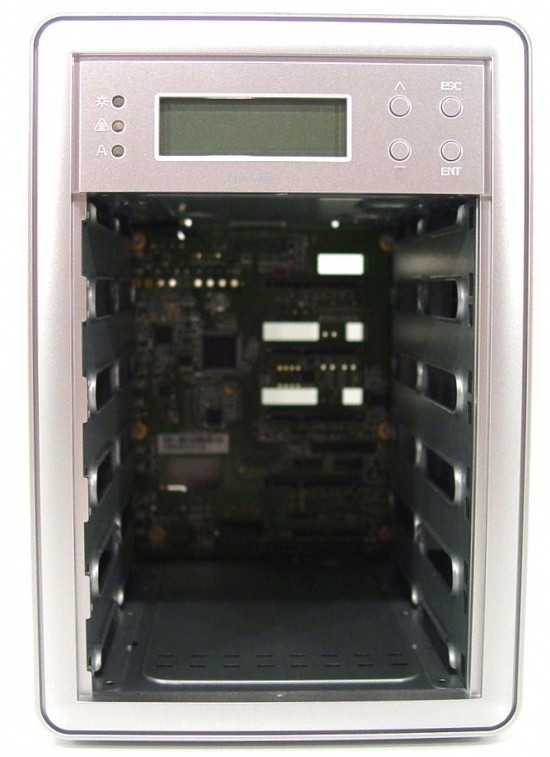 The system ships with the drive bays removed, so we took the opportunity to show the system bare. 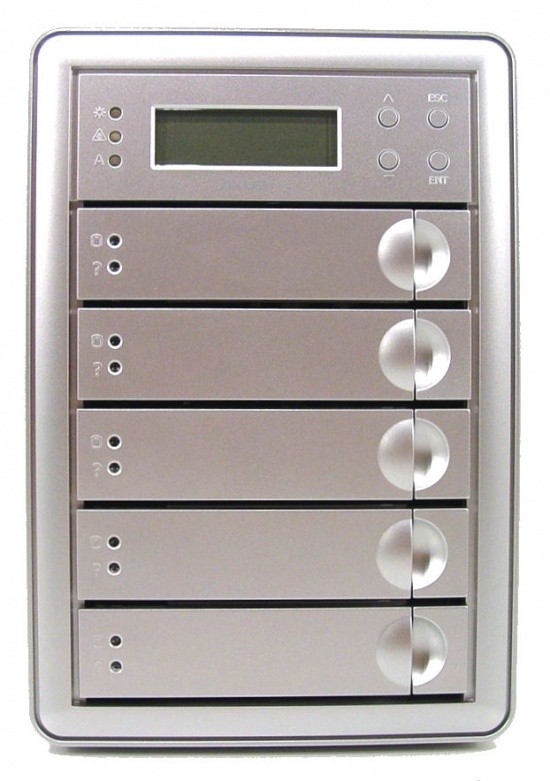 Here we see the drives installed. At the top a control panel allows the user to easily view the system status and set the RAID modes at startup. I configured the system for the first time with just the front display and can tell you that it is easier to navigate than the Thecus and QNAP front displays. 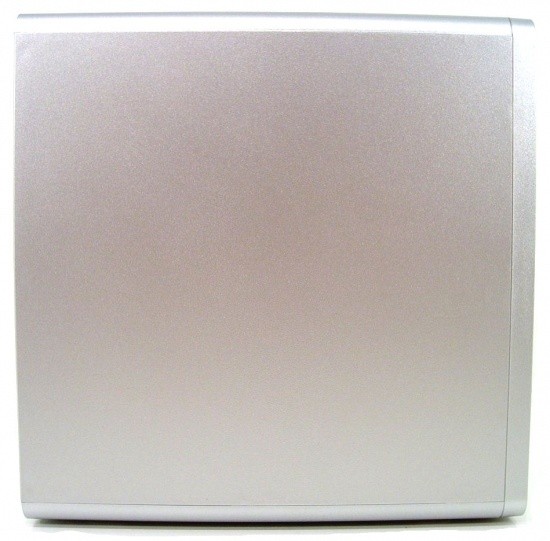 The side of the system is solid, but gets the job done. 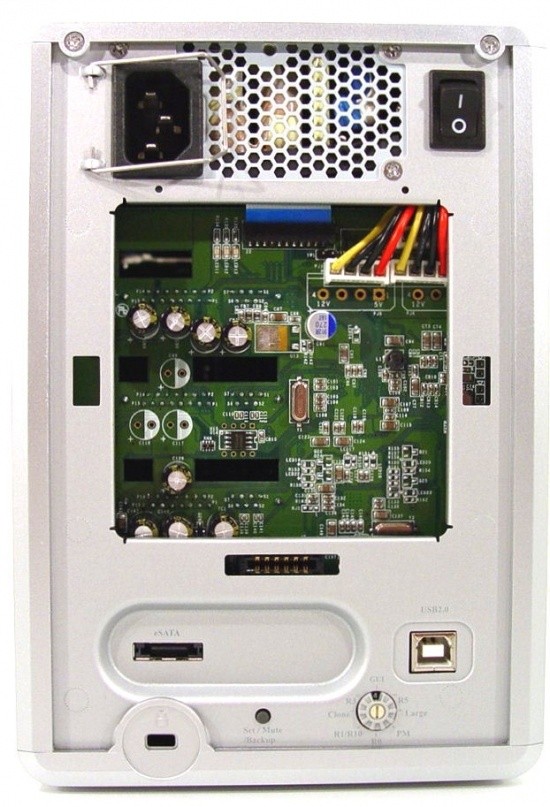 The FiT 500E ships without the rear fan connected to the system. 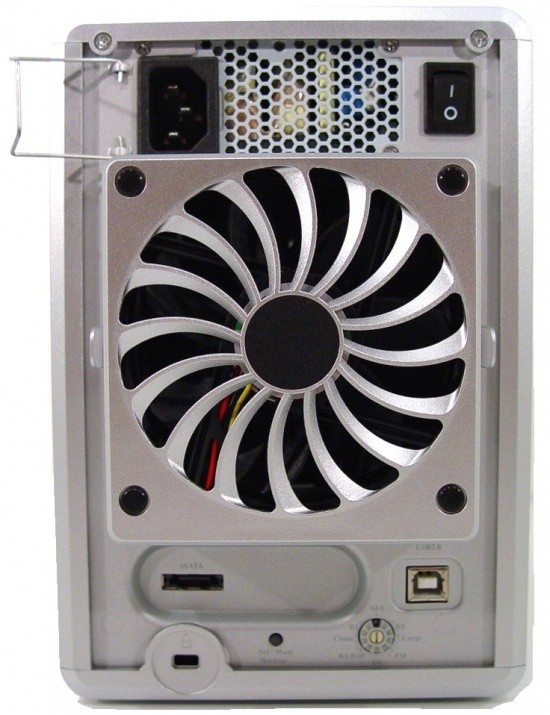 Here we see the fan installed. This adds around an inch to the overall length to the system, but it is quite small to begin with so it is not an issue. 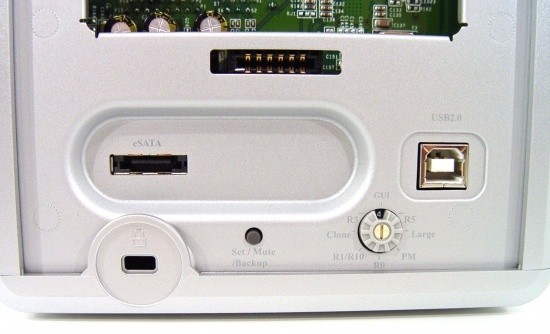 The eSATA and USB ports are on the back, as is a rotary switch that makes setup quite easy. You can set the RAID level with the switch or set it to GUI which allows you to adjust the array via the host software or the front panel. 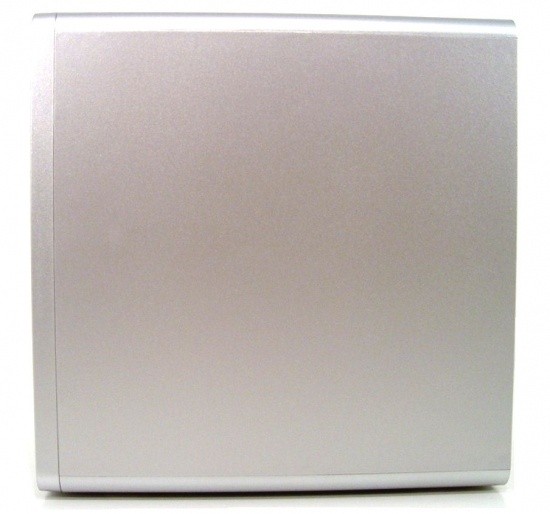 I was quite surprised to see that the FiT 500 doesn't have any ventilation on the sides of the DAS at all. That means that all of the incoming air passes over the drives. 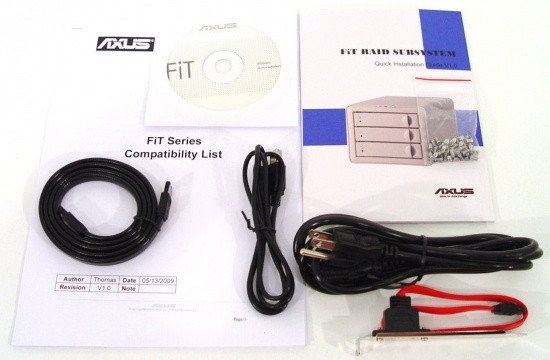 The accessories package for the FiT 500 is quite impressive. Every cable needed is included with the system including the eSATA cable and bracket. AXUS has also included a compatibility list which shows the hardware they have tested. The software CD includes all of the manuals and the host PC software that makes setting the system up much easier.

For this review we are going to compare the AXUS FiT 500E to the Promise SmartStor DS4600 that we reviewed just a few short weeks ago. The SmartStor is a four drive DAS that was also tested with eSATA and under RAID 5. 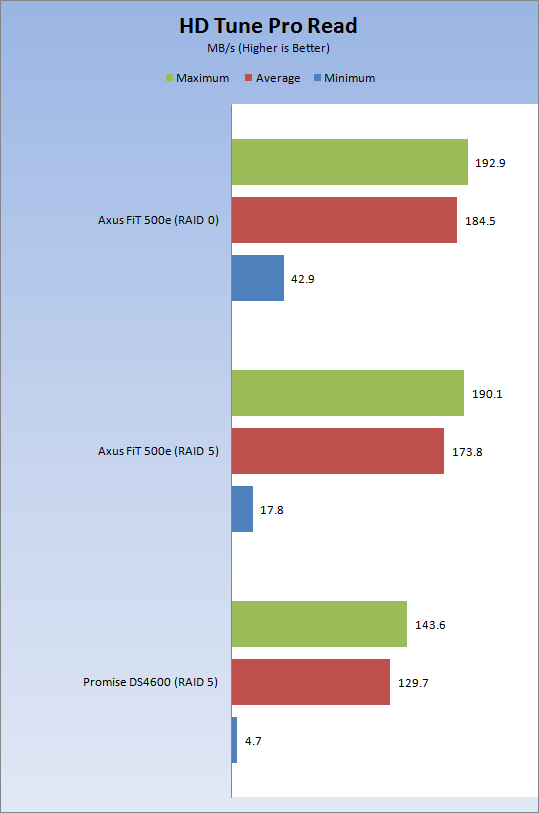 I would never suggest running a storage server in RAID 0 since there are just too many things that can happen that will lead to a loss of data. The RAID 5 numbers for the FiT 500E look pretty good considering you are pushing five drives worth of data through a single eSATA connection. The FiT 500 is faster than the Promise SmartStor DS4600 in read speeds. 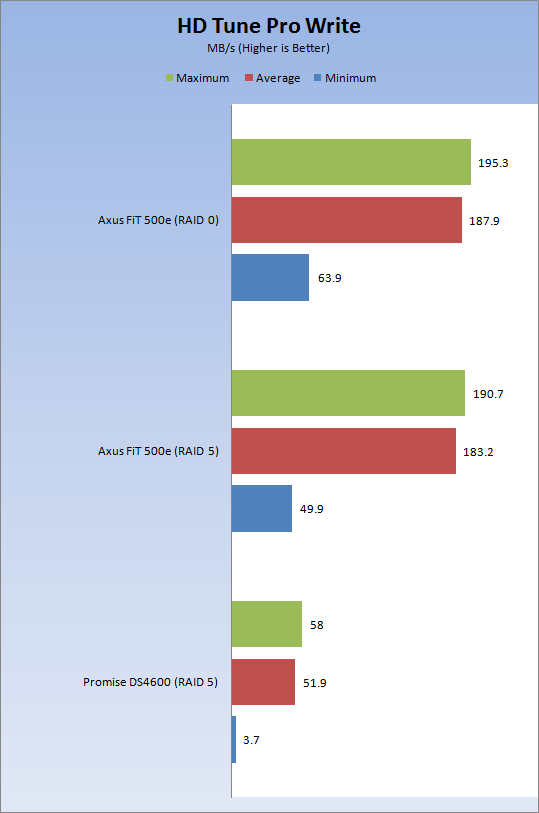 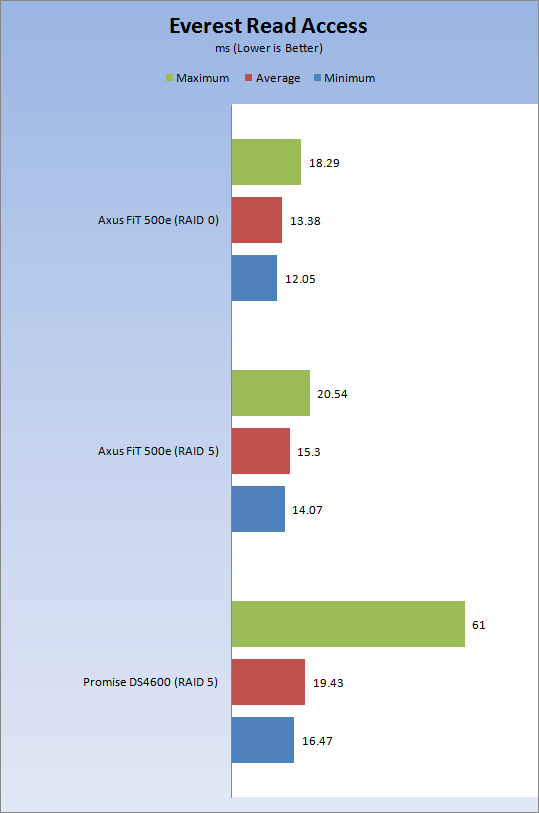 The read access times look pretty good for the AXUS FiT 500E in both RAID 0 and 5. 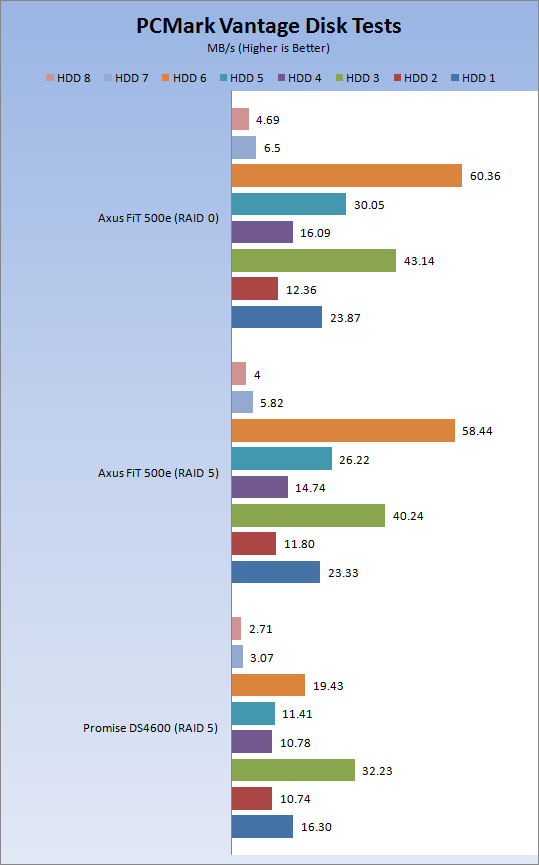 Our real world Windows tests show strong performance in multimedia tests. Most users are using their DAS for these specific purposes and we are glad to see such high performance numbers in these tests. 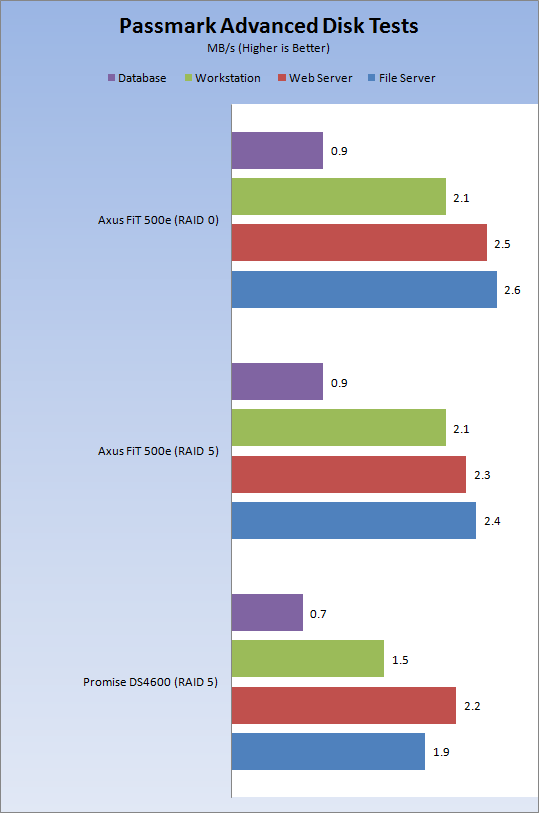 Once again we see the FiT 500E outperforming the DS4600 in all tests. It appears that the RAID 5 penalty is very low in almost all of the tests, so be sure to enable this option to keep your files safe.

Direct Access Storage is a great alternative to the high priced NAS servers. If you only use a single computer in your home then DAS is actually a better option since all of your data is tied to that system and is not exposed to wireless networks. When it really comes down to it, the AXUS FiT 500 is even cheaper than a dedicated internal RAID controller and for many a better option since not every case has room for an additional five hard drives or the power to keep them running smoothly.

The performance of the AXUS FiT 500E maxes the eSATA interface, so it would be nearly impossible to get more performance until we start to see external SATA 6 Gb/s products. But with no mention of eSATA 6 Gb/s coming from SATA-IO, it will be awhile before those dreams materialize.

When it comes to the cost of the AXUS FiT 500E, the MSRP of 429.00 USD is in line with similar products in this class. I can't say I like only finding the 500E available from only one e-tailer in the U.S. but I was assured that more are coming and we should start to see AXUS products being made widely available in North America in the coming months.