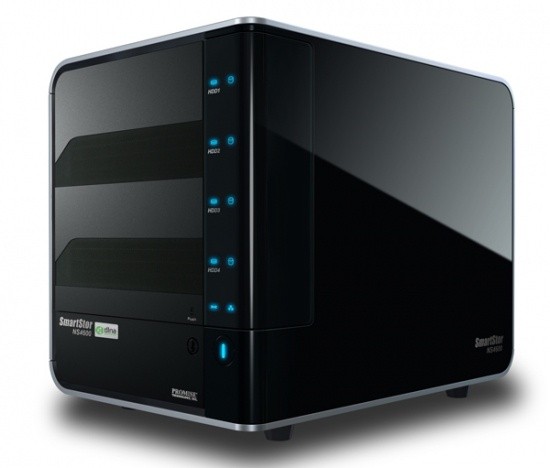 
We talk about the benefits of NAS servers a couple of times a month around here. It really doesn't matter if you are storing a collection of family photos or your businesses tax returns, it's all important data that you wouldn't want to lose. The more data you have to store, the more expensive a NAS server can be. For home users a four to five drive NAS tends to be the optimal balance of protection and speed, but the cost can be as much as a new complete computer.

For single computer families a NAS server can be cost prohibitive. Enter Direct Attached Storage or DAS servers. DAS servers can connect to your PC through USB, Firewire or eSATA and offer the redundancy of a full NAS, but at a substantial cost reduction.

The Promise DS4600 has the specifications of a NAS server that costs several hundred dollars more than what it is offered at. Newegg currently lists the DS4600 for 324.99 USD, quite a bit lower than the Thecus and QNAP NAS servers we review here every couple of months. The DS4600 uses four hard drives (that you must provide later) and supports the usual levels of RAID that keep your data secure.

Before I get too far along into the specifications, let's move on to the Specifications section of this review. 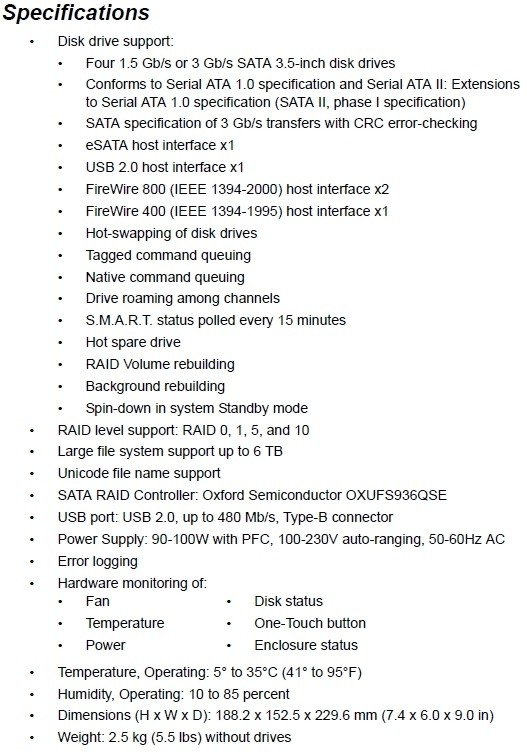 The Promise SmartStor DS4600 is a four drive server that connects to your computer through USB, eSATA or Firewire (400 and 800). RAID 0, 1, 5 and 10 are all supported just like NAS servers and you can rest assured that your data is protected nearly the same way. eSATA is the fastest option available for connectivity and if everything goes as it should we should see transfer rates that are only limited by the speed of your motherboards SATA bus.

Once connected and configured the DS4600 will appear to your computer system as a hard drive, just as if you installed a drive inside the box. Promise includes a bracket for eSATA and an eSATA cable making installation simple. The included software makes setup easy, even easier than setting up a NAS server.

As we mentioned earlier the cost of the SmartStor DS4600 is remarkably low. After a quick search we were able to find the DAS at Newegg for only 324.99 USD. That is 550 USD cheaper than the Thecus N5500 we reviewed here just days ago. You will still need to purchase hard drives for your DAS just like NAS servers. The good thing is that large capacity drives have come down in cost and you can find 1TB drives for 80 Dollars or less.

Let's have a look and see what all is included with the Promise SmartStor DS4600. 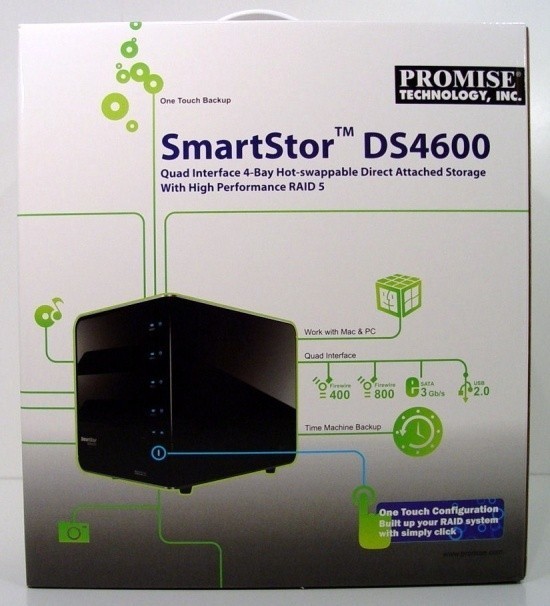 Promise products are available in many retail outlets like Fry's Electronics. Here we see that the DS4600 comes in a full retail package. On the front we found a wealth of useful information like PC and MAC support as well as the connectivity options that are available with the product. 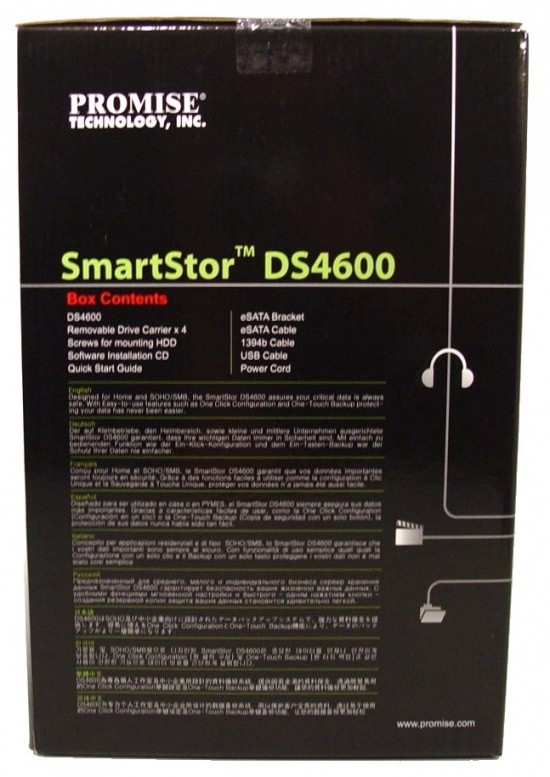 The contents of the retail package are listed on the side of the box. 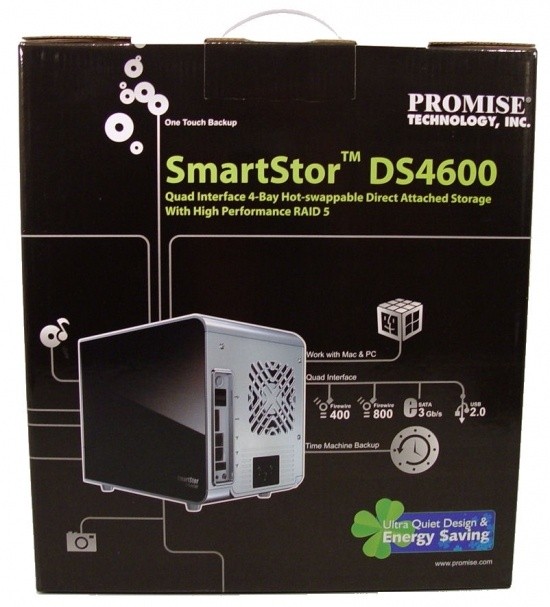 The back of the package is nearly identical to the front. 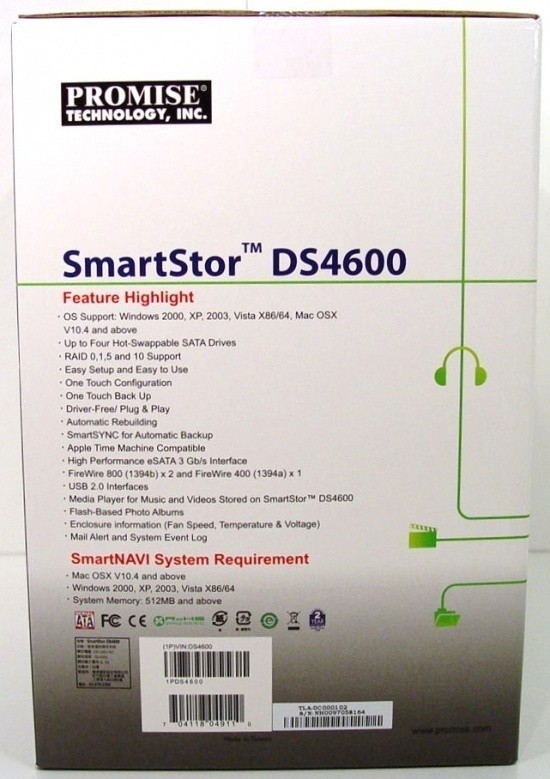 The product features and software requirements are listed on the side. Windows 7 is not listed as a software option but I can confirm that it works flawlessly. 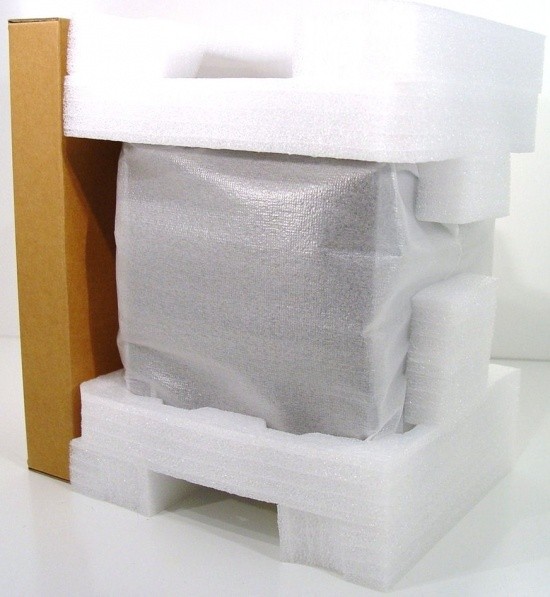 The inner package secures the DAS safely for transport and shipping. All of the accessories are inside of an additional box and it keeps them from bouncing around and scratching the DAS. 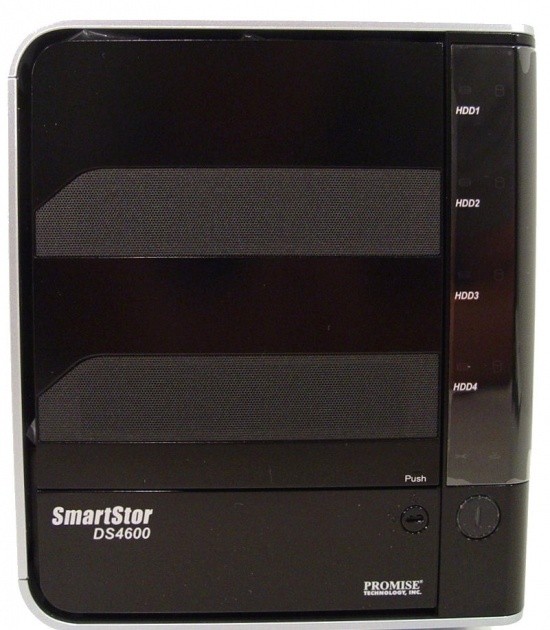 The front of the SmartStor DS4600 has a lockable door that will keep your drives secure. Each drive has an LED section assigned to it and it shows when the drive is in operation or when a problem has occurred. 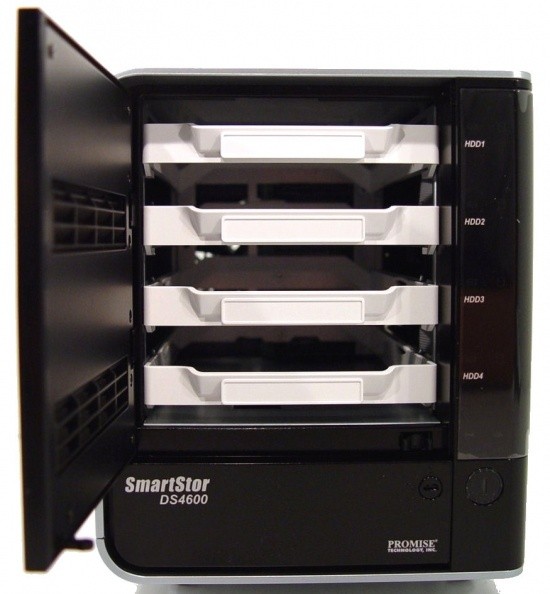 With the door open we see the drive carriers in place. 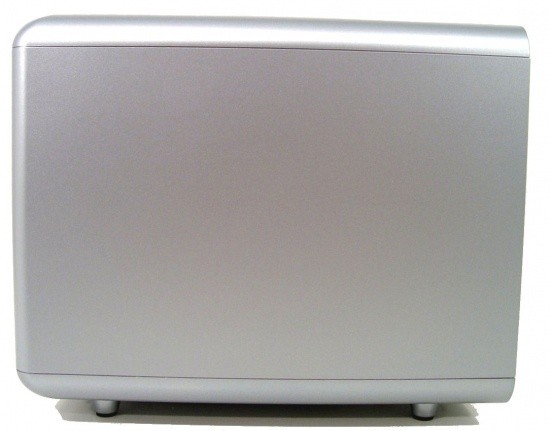 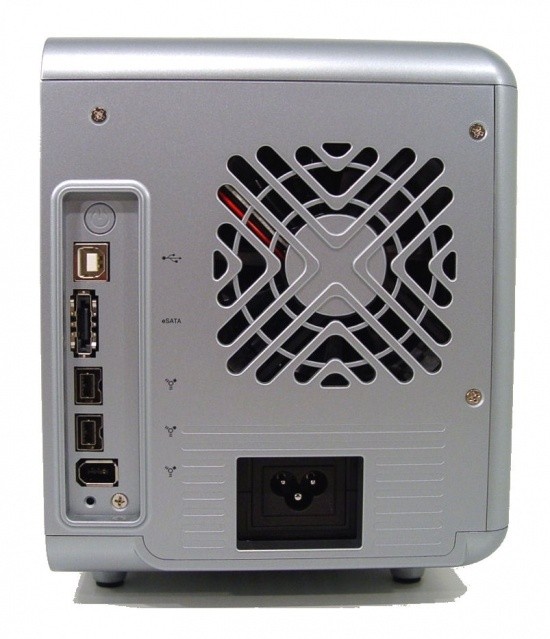 The back of the DS4600 is where most of the action is. Here we see the ports that you can use to connect the unit to your PC or Mac. The power button is also located in this area as is the power cord. A large fan keeps the drives and other hardware cool while staying quiet. 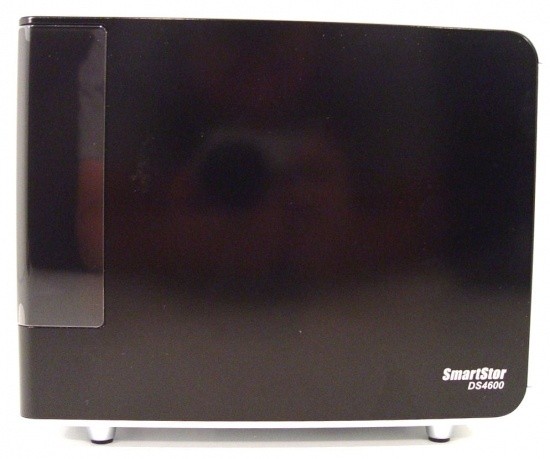 Promise spiced up this side of the DAS with some black paneling. 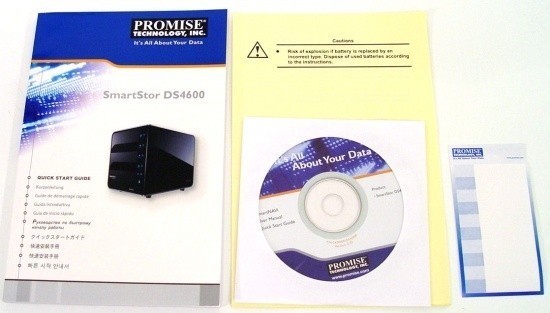 The unit comes with a full product manual, software disk and notes on setup. 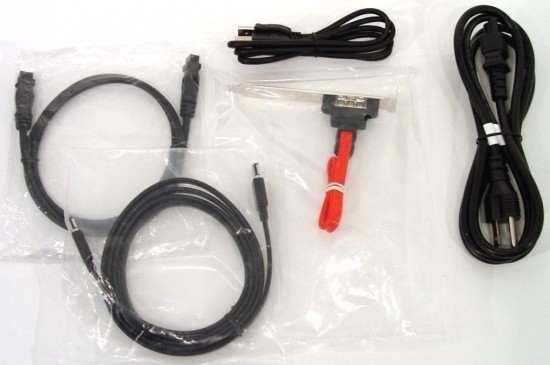 The accessory package for the DS4600 includes an eSATA bracket, eSATA, Firewire, USB and power cables.


We are going to test the Promise DS4600 with our latest Storage Product Testing Workstation. You can view more about the new system and the procedures used in this article.

The drives used for testing the DS4600 were provided by Seagate and they are Seagate 7200.11 1TB models.

Since this is the first time we have tested a DAS there is little data available for us to compare the performance to. We will be testing the system in RAID 5 with four drives and attaching the DS4600 to the rear eSATA port found on the ASUS P6T7 WS SuperComputer motherboard. 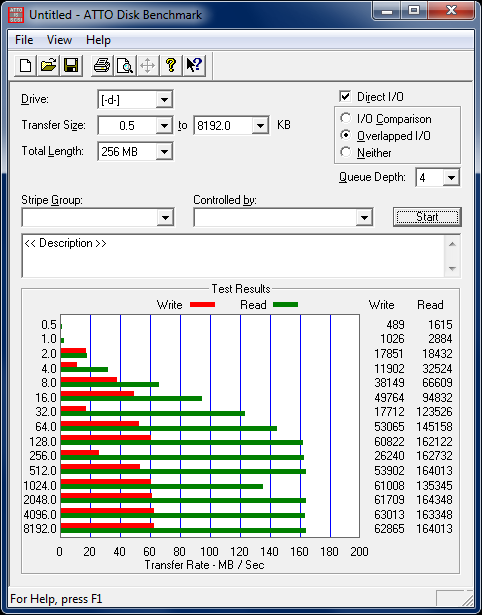 We started out testing off with ATTO to get a baseline of performance for the DS4600. As we expected the read speeds were very good and the DS4600 pretty much maxed out our SATA port. Unfortunately we also expected the write numbers to be low since the DS4600 has to handle all of the XOR calculations. Still, the system is far from slow but it does take longer to write data than it does to read it. 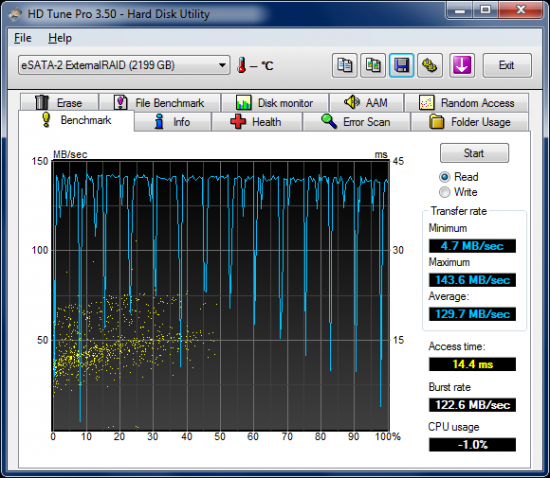 Our read sustained transfer rate test shows some interesting data. We were able to average 129 MB/s but the system has some intense drop offs in performance going down to as low as 4.9 MB/s. 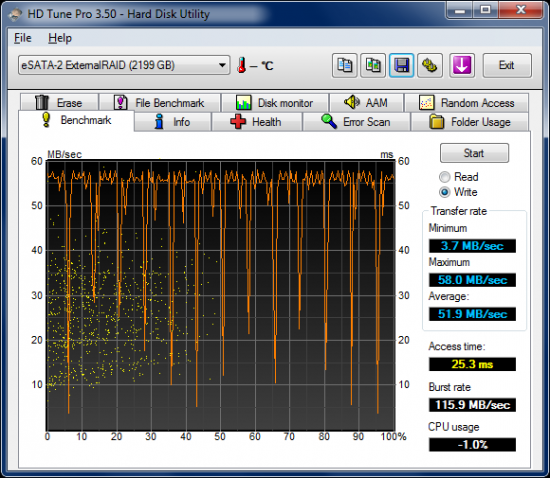 The write tests show the same type of numbers, only lower. It will be interesting to see how results like these affect our real world tests. 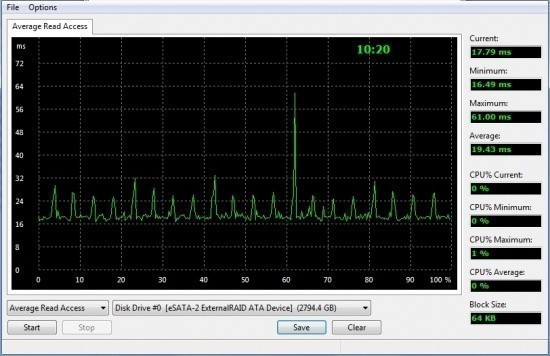 The latency of the SmartStor DS4600 is much higher than that of a standard hard drive or internal RAID controller with the same amount of drives in RAID 5. 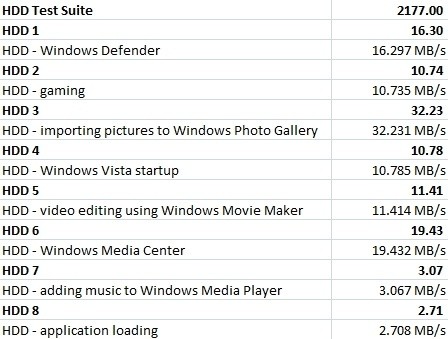 It is clear from the benchmark results that working directly on the SmartStor DS4600 to edit videos or photos could be a painful task. 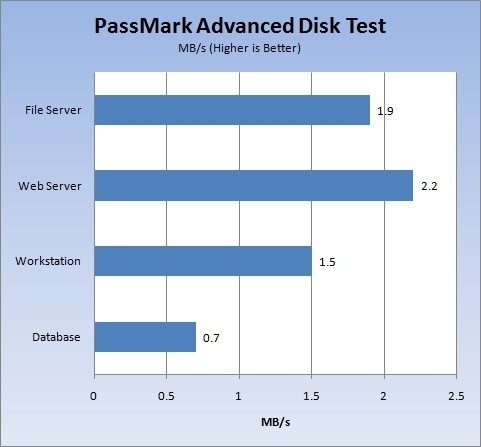 The final test shows the DS4600 is a consumer product that isn't ready to take on the high bandwidth needs of server applications. Here we see the DAS barely breaking 2 MB/s in its best run.

The final verdict for the Promise SmartStor DS4600 really comes down to the consumer and how it is going to be used. If you are going to attempt to use the DS4600 as a large hard drive to store workable material, like editing several video clips together then forget about it, you are going to need something more powerful. If you are a looking to just store data like pictures, music, movies or documents and not need to access them at high speeds then the DS4600 can be one of the best options around. The whole thing just really comes down to personal use and if you are honest with yourself about it the DS4600 could end up being a great value solution.

Speaking of value, as long as you are just looking for a long term storage solution, at 324.99 USD the Promise SmartStor DS4600 is a really good deal. Once you figure in four 1TB HDDs for 320 Dollars you have less than 650 Dollars wrapped up in a RAID 5 device with enough storage to handle most people's personal data collection. The real issue here is redundancy and it is something that we all need.