I've had force feedback devices before, such as a joystick that was pretty much useless for anything but flight sims. But what NOVINT have brought to the table here is by no means an evolution of the force feedback joystick. It's much different!

This concept has been redesigned from the ground up to really give you a perspective based control over the environment, either through an FPS game, a flight simulation or even 3D object manipulation and design. 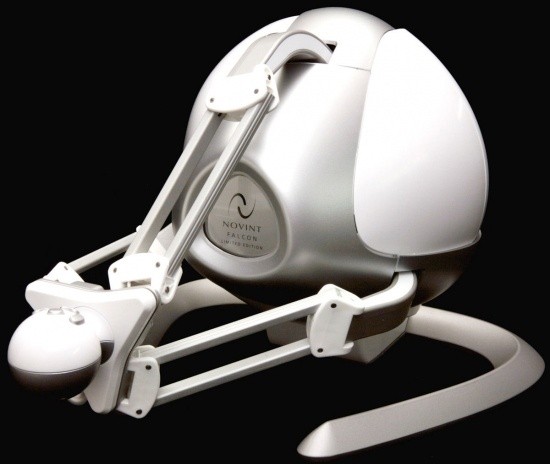 First things first, let's have a look at the specifications of this device fresh from the manufacturer's site:

What's of most interest to us is the 3D Touch Workspace, giving us 4 cubic inches of freedom to move around in. This is generally greater than the extent you can comfortably move your hand at the wrist in free-space, so there is a lot of room to play with.

Force Capabilities will tell you how hard the unit can push and pull your hand around; and unless you have some sort of iron wrist from too much ............gaming ............you will find your hand jerked around by the physics reactions from the environment.

The DPI resolution is nothing to write home about, but when you are controlling motion in a three dimensional space, resolution is the least of your concerns.

The quick disconnect handle is worth mentioning as well. With a simple pinch of two tabs you can quickly pop in and out any different controllers, from the ball to the pistol grip. Unfortunately for now there are only the two grips available, but NOVINT is currently working and researching new interface paradigms to blow your mind and increase your interaction experience.

It's good to know that the company is actively supporting companies to implement their device, with SDK easily available and forthcoming F-Gen drivers which will make the device compatible with every game. In the mean time you will just have to play some current favourites such as Team Fortress 2, Left 4 Dead and Battlefield 2! 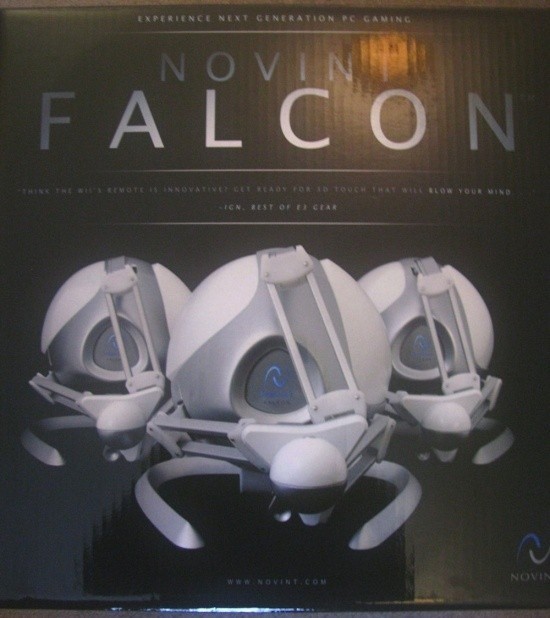 The box has some impressive art work and a great quote from IGN to get you hyped about the toy nestled inside in the cocoon of Styrofoam. 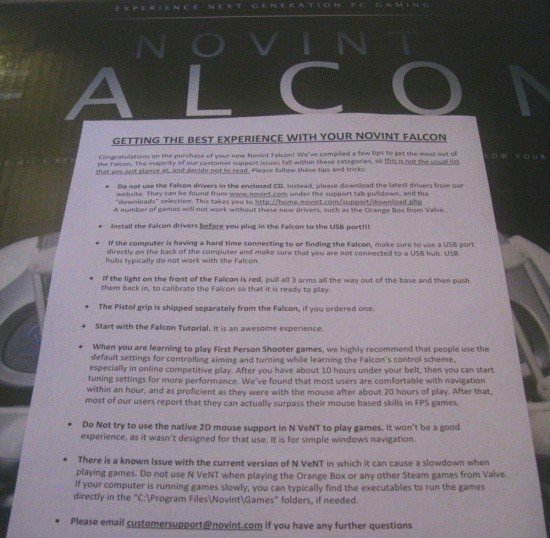 And upon opening the box we see a nice note from the manufacturers letting us know how to get the best out of our NOVINT; also with a note at the bottom from the CEO of NOVINT to let you know that he is at your disposal should you want to contact him about anything.

He also actively patrols the forums and answers any questions he can too, which is a nice level of involvement with the end user base. 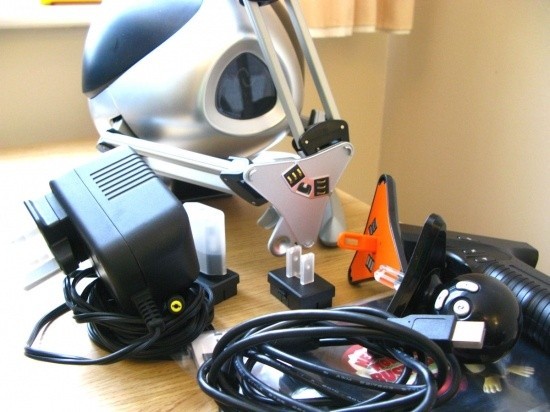 Out of the box, you can see the unit comes with a multi socket power adapter with plugs for UK, US and EU. A USB cable and the ball/knob attachment is also included. Worth a pickup as well is the pistol grip to make playing games that bit easier and more realistic. 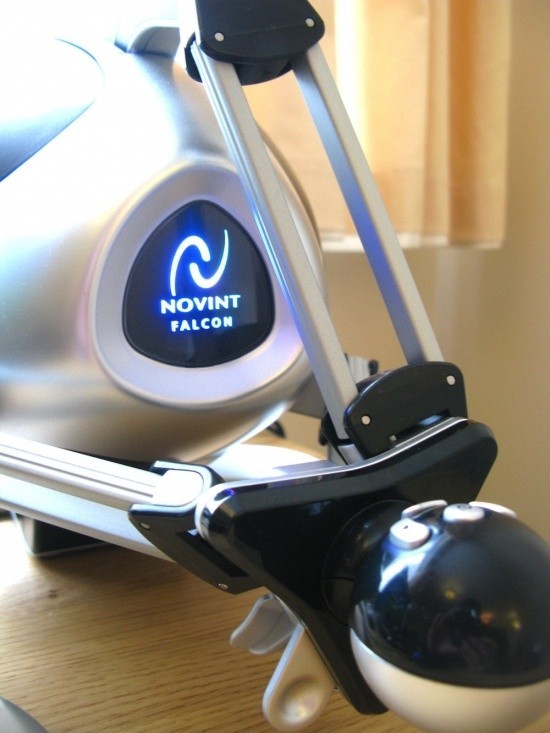 A close up now on the Falcon in its dormant on state, you can see the multi-coloured lighting and the slack motors letting the handle droop to the bottom. Unlike the force feedback joysticks, calibration is simple and just involves pulling and pushing the knob in and out to its full extent, where the light will turn from red (uncalibrated) to green (calibrated). 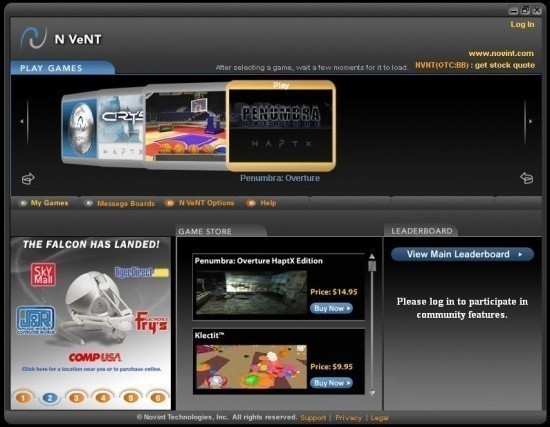 So, as suggested in the included piece of paper, we disregarded the driver CD and went straight online and downloaded all the latest gumph to drive this unit. Then after plugging it in and running the tutorials, there is a world of textures and physics mini-games to play with to help you get used to the device.

The reproduction of surfaces and texture feedback is nice to feel, as you run your virtual hand over a sphere of varying surface materials and even try to push your hand through the sphere of rubber and then honey!

Ok, so maybe I'm being taken in a bit by the wow-factor of the device here, so it's time to get serious and put my game face on, firing up a couple of choice FPS games with the pistol grip to find out how well they have implemented the feedbacks and immersion.

It is suggested that it will take between 10 and 20 hours of play to get used to the device and for it to feel natural and comfortable as a mouse, so I'm not expecting to get many headshots in this review session.

First on the block is Left for Dead, a well-established industry leading zombie explode'em-up that demands not so much precision as jumpy disposition, twitch trigger finger and a hatred for the undead.

After half an hour of fleeing hoards of brain munching blood thirsty reanimated corpses, my wrist is aching already from the feedback of unloading a shotgun countless times in the face of some screaming ghoul!

But you know what? I forgot I was using the damn thing! It's incredible how natural this feels to use in a game with the pistol grip. 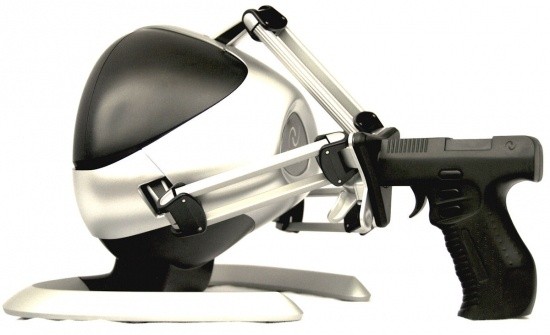 Next on the chopping block is a good old standard, Battlefield 2. A bit of online pwnage and helicopter stealing never goes amiss in a review. But more importantly it's a good chance to try out the Falcon for its accuracy as well as ability to navigate your character over large amounts of terrain rather than running corridors.

This game certainly took a little longer to get used to with the Falcon, as you have to adjust your characters view a lot more than a regular fps. But to help that you can tweak all the settings to your heart's content so it's only a matter of time before I'm hijacking tanks and popping enemy helicopters out of the air with this new controller.

Also worth mentioning is the fact that when you are shot at in game, the feedback will push your hand away from where you were hit so it's a lot easier to tell if someone is shooting you in the side or in the back!

So, what's the bottom line with this new controller? How does it stack up against using a mouse and how does it change the way you play games?

The fact is that you are always going to be used to a mouse; you have been using them for so long that anything else is going to feel strange (assuming you aren't one of those freaks who still uses trackballs).

The addition of an extra dimension of freedom means that you can really get more involved in the POV style of control and your overall experience of the game increases significantly.

Force feedback really forces you to rethink your game as well, with recoil on weapons throwing your aim off. You will have to keep re-sighting on that sniper that keeps getting a headshot every freaking time!

But enough about my lack of abilities, the included notice does say that you need approximately 20+ hours to really feel as comfortable as you do with a mouse, so don't expect to become the worlds greatest gamer overnight.

If you want to get competitive you can tone down the forces so that you cursor control doesn't flail around every time you get shot, and what NOVINT have been striving for is to actually help make your multiplayer gaming experience more competitive.

The feedback actually gives you an edge over most people once you are used to the controller due to the greater level of immersion in the game.

Now, there is a down side to this immersive game play issue...the cost!

For a penny off $200USD you can be the proud owner of a Falcon with the pistol grip, or for $189.99 you can get the plain unit with the ball-grip attachment.

That's a lot of money! But there is hope! I have here for TweakTown readers a 20% Discount code!

Just enter OFFER20 when you purchase it through their online store.

The CEO of NOVINT has contacted me to pass on a link to his own video of the Falcon being used during Team Fortress 2. He reinforces the idea that the device can actually help you become more competitive in your game than a regular mouse can, thanks to the feedback generated so you know where your enemy are when they shoot you. You can watch the video below :-