The Recon controller proudly displays a "Designed for Xbox" logo on the front face of the box, but will it be the new Xbox controller you need? 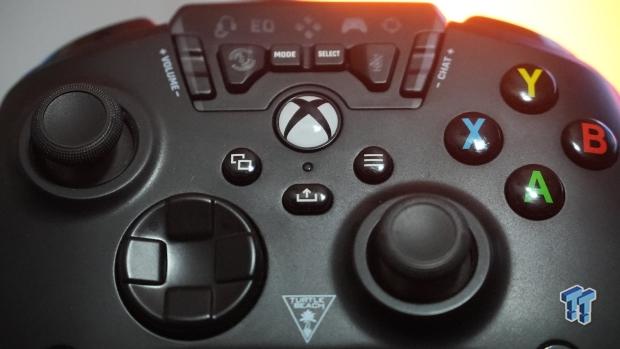 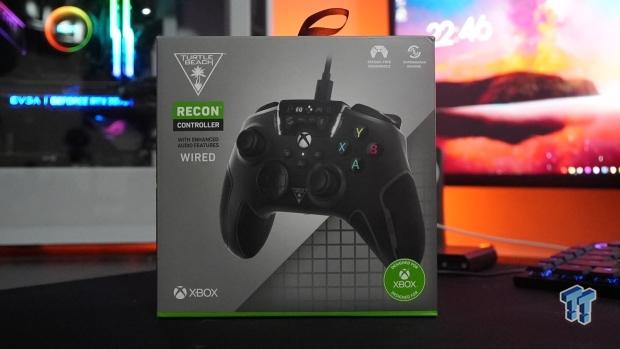 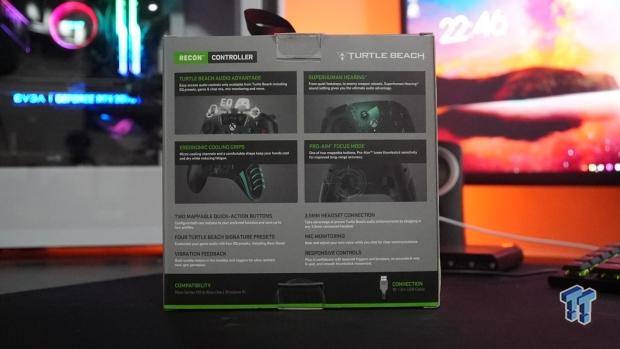 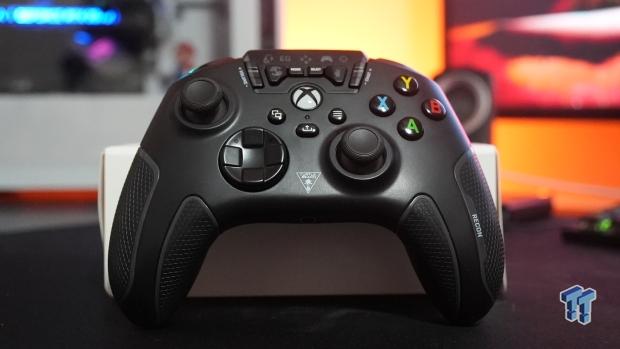 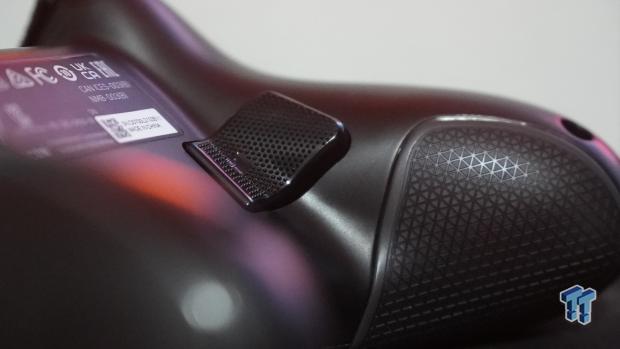 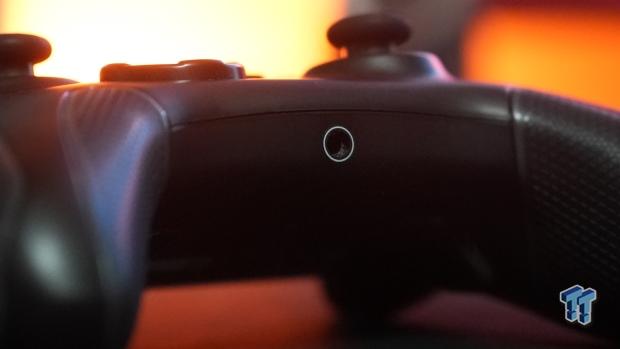 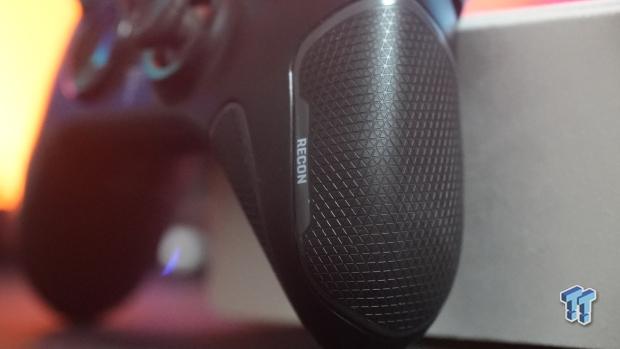 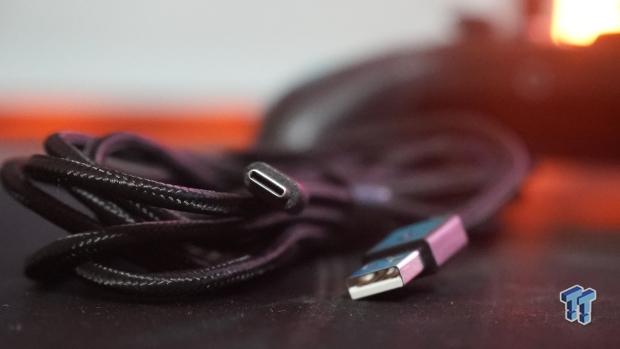 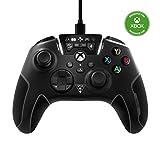 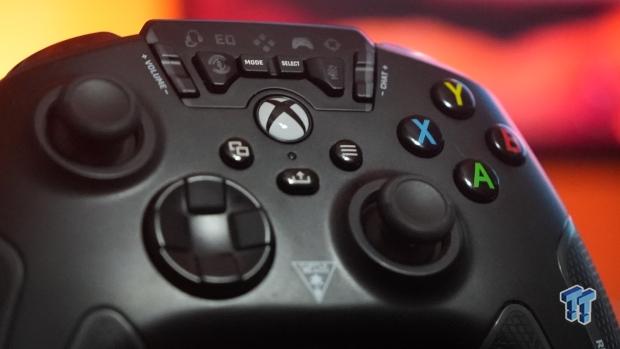 Included in the box is the controller itself, documentation (an instruction manual, warranty & customer support sheets, a small Turtle Beach sticker measuring 55mm²), and a sleek, 3 meter braided USB-C cable with an in-line Velcro cable tie.

Lacking any wireless functionality, the Recon controller requires a USB-C cable to be plugged in at all times. The Recon controller weighs in at ~227 grams, and has a comfortably sturdy feel in hand. Compared to the Xbox Series controller at ~241 grams without batteries (or ~287 grams with), the Recon is significantly lighter than its wireless counterparts, resulting in less fatigue in the hands with extended use.

The grips of the controller have rubberized sections on both the inside and outside to help dissipate heat from the user's hands and provide comfort and extra grip. The triggers, bumpers, and underside paddles all have a raised hexagonal dot-matrix texturing to provide extra grip. The analog sticks have a similar texture around the edges to reduce the likelihood of one's thumbs slipping off, which is accentuated by the concave top for the thumb to sit in that is also present in the directional pad.

The button labeling on the bumpers and triggers is inverted in the same fashion as other modern controllers for easy identification when turning the controller up towards oneself. On the underside of the controller recessed in the shell of the controller are five small Phillips head screws, easily accessible with a thin screwdriver for disassembly should one desire to modify or repair components in the future.

Plug and play works seamlessly with Steam, with the controller being identified as "Xbox One Controller" and using the respective profile, which is widely supported amongst PC titles. When accessing Controller Settings via Steam's Big Picture Mode, Xbox Configuration Support and Xbox Extended Feature Support can be enabled to support individual addressing of the paddles to specific key binds for Xbox Elite Controllers.

The paddles on the underside are very comfortably placed, with the middle fingers of each hand resting naturally over them with the index finger covering the triggers and bumpers. With an index and middle finger operating the bumpers and triggers simultaneously, the ring finger has to travel from its natural gripping point further down the handles of the controller to reach the paddle. However, this experience will vary from user to user. I found assigning the bumpers' functionality to the paddles so I can leave my middle fingers on the paddles and index fingers on the triggers ideal. 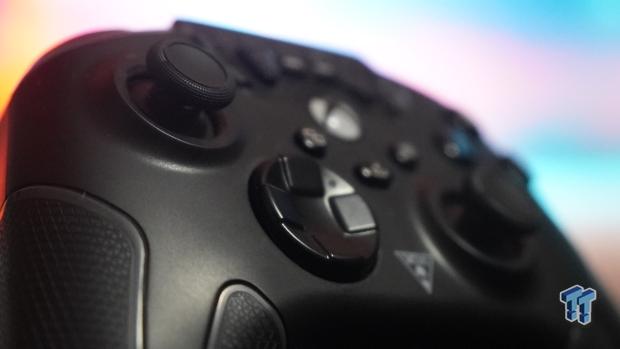 On the control panel at the top of the Recon, the illuminated icons from left to right are controls for microphone monitoring levels, EQ adjustment, button mapping modes, and Pro-Aim focus mode. Mode selection and alteration is surprisingly intuitive, with the mode button cycling left to right through each option.

The select button cycles through the presets for each option, indicated by the grid in the middle, which lights up in a clockwise fashion, giving four settings for EQ and button layout, and five for microphone monitoring and Pro-Aim with the addition of an off setting. When no audio device is connected to the 3.5mm port on the controller, only the button mapping and Pro-Aim modes can be cycled between and modified.

Microphone monitoring boosts the volume of the players' voice as detected by their microphone in their own headset. This can be helpful to ensure you're not yelling excessively, although it may be of some annoyance at higher levels. When using a headset connected via USB and 3.5mm, if microphone audio is carried over USB and not the 3.5mm jack, this feature will not work. TRRS 3.5mm jacks carry microphone audio, identified by three black rings on the connector instead of two. Only headsets which all audio through their 3.5mm (TRRS) jack into the controller will be able to take advantage of this.

EQ settings cycle through a default mode, boosting bass, boosting bass & treble (V-shaped EQ), and boosting vocals. All modes serve a purpose, and personal preference will ultimately determine which you settle with or cycle between.

Button remapping allows for four different profiles to be easily cycled between after mapping the paddles to the desired buttons, which is convenient for swapping between games where you prefer a different button assignment.

Pro-Aim focus mode reduces the sensitivity of the right stick when the right underside paddle is pressed and held. A larger reduction in sensitivity is achieved with higher settings indicated by the light-up grid on the panel. This lets the player stick with a preferred sensitivity while allowing them to easily tone it down for more precise aiming in a pinch, or allow for smoother panning of shots for photo mode connoisseurs. 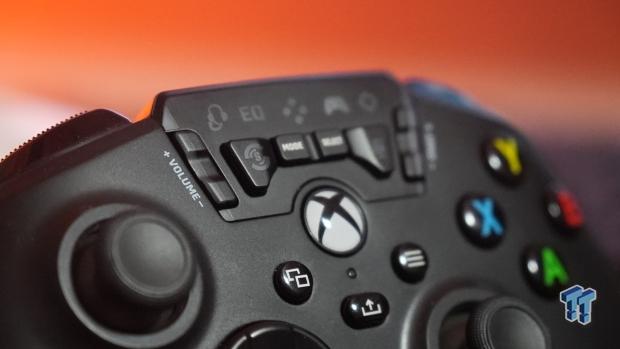 Flanking the Mode and Select buttons are buttons to enable Superhuman Hearing and microphone mute button. Fundamentally the Superhuman Hearing acts as another EQ setting, overriding whichever EQ setting is active and disabling the ability to change it while it is active. Superhuman Hearing boosts specific higher frequencies to make sounds like footsteps, reloading, and other important in-game sounds more pronounced and help increase the player's awareness of their surroundings in competitive settings.

Depending on the player, this may be of negligible impact, or not enough to justify the detriment to the overall mix and audio experience. The mute microphone button works as expected; however, microphone monitoring will not disable a microphone that does not run directly through the 3.5mm port of the controller.

On the outer edges of the panel are volume controls for system volume level and adjusting the volume of party or lobby chat in the overall mix. The latter comes with the caveat in the quick start guide that it is not supported on PC. Both controls adjust up or down in increments of 10%. When reaching 50%, a short beep is played to signify the halfway point. Both volume controls light up when an audio device is connected, and increase or decrease in brightness independently to reflect their settings. When disconnecting a device, they return to the base level of brightness the other buttons have when the controller is plugged in and powers on.

The Recon controller offers gamers a comfortable grip that is bolstered by its range of audio enhancement features.

Additionally, headsets with extra features may not have complete support for them when being used with the controller. The gesture inputs for volume and track skipping, stopping multimedia playback on headphone removal, and other features of the Sony WH-1000XM4 do not register, so control over music while gaming or otherwise is hampered. In-line controls of other devices for overall volume adjustment will work. However, your experience will depend upon what audio device you pair with the controller.

Overall the Recon controller is a comfortable, sleek, and extremely functional device. Some features will be more universally appreciated than others, and the extent to which some are used will be dictated by the player's imagination. 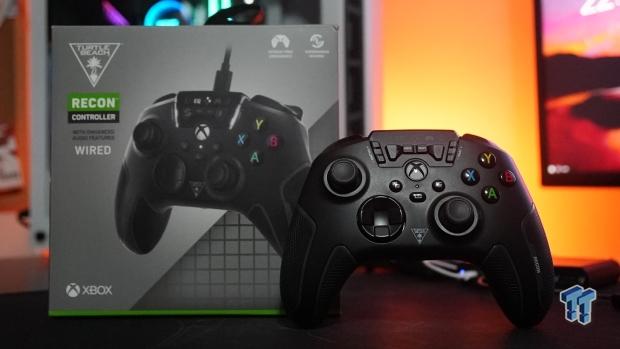 So, is Turtle Beach's Recon controller worth replacing the Xbox Series X controller you are currently using? If you fit the following description, I would say yes. Suppose you are a gamer that is looking to step up your in-game audio experience while having a degree of customization and aren't too fussed about having a wireless controller. In that case, the Recon controller is a fantastic option.

With an MSRP of $59.99 that matches that of Microsoft's Xbox Series controller, it is a compelling offering for the player that appreciates the Recon controller's extra features, and even for those who won't be bothered by them.