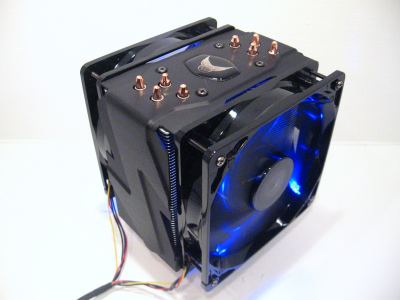 This is the first cooler from Vigor that I have tested, but they have had a couple of other CPU coolers on the market, both of which were TEC air coolers. Vigor also has a nice lineup of cases as well as complete systems. This time instead of the plain looking coolers mounted to their TEC's, Vigor has taken a different approach. They opted out of the TEC part and have gone with a stand-alone air cooler.

What we have with us today is the Vigor Monsoon III LT, Vigor's first CPU cooler without a TEC to share the Monsoon name. Previously Vigor's lineup was the Monsoon II and the Monsoon II Lite, both using a TEC plate to aid in how they cooled. The Monsoon III LT is an eye catching design and the obvious use of dual fans is a plus to getting more airflow. First impressions of this cooler are that it looks nice in all-black attire and it seems up to the task of keeping the newer over clocked CPU's within healthy operating temperatures.

Vigor's claim with this cooler is that they took "what would be a traditional air cooler, and pump it so full of steroids that even BALCO would be impressed". With that being said, I expect good things to be had from purchasing this cooler. Lets strap it to the CPU torture test and see how well the Monsoon III LT stacks up to the rest. 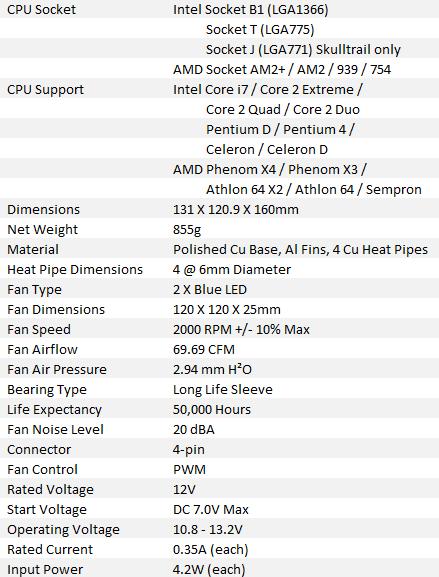 The Vigor Monsoon III LT weighs in at 855 grams and is 160mm tall. This cooler supports a large array of CPU's, including the new Socket Bi (LGA 1366) Core i7 lineup. To keep the Vigor cool, they went with black translucent fans with blue LED's to add to the lighting decor.

The Monsoon III LT comes with a flat copper base that transfers heat through four 6mm copper heat pipes. The heat then travels up to the dual aluminum fin configuration, sandwiched between two 9 bladed fans. The heat is then removed from the fins in just under 70CFM of airflow per fan. With the fans being rated at a max of 20 dBA, this cooler should be barely audible in any chassis.

Taking a quick trip over to Newegg reveals that the Vigor Monsoon III LT retails at $59.99 with free shipping at the moment. At this time I can only find the cooler at one other e-tailer, but I would expect others to carry the line as well. The Monsoon III LT does break the magic $50 mark that a few premium coolers ring in at as well. We shall see a bit later how it holds up to the other coolers in its price bracket.

I can only hope more companies get on the ball and start getting their i7 hardware into the respective coolers. Seeing what I have, with people already using the new Intel line of CPU's, cooling on air is getting to be a really tough job. Many people have their favorites, but not all come with the supported hardware to keep these coolers functional with an upgrade. With engineering comes cost, though, so let's see if the cost here is for added features or performance. 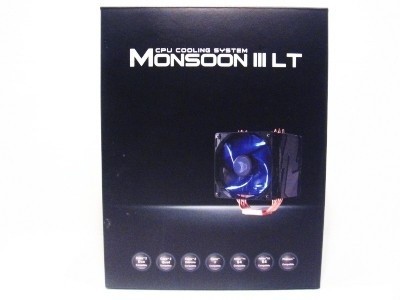 The Vigor Monsoon III LT CPU cooling system is contained in a non-descript black box, with appropriately enough, an image of the cooler in action. The bottom of this side shows bubbles containing compatible processors as well. 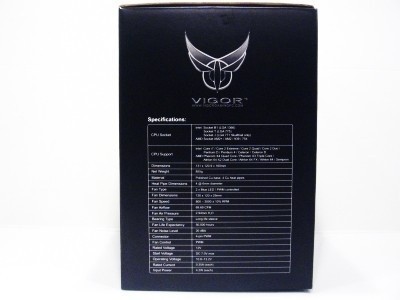 The right side of the package is emblazoned with Vigor's logo, with the specifications chart directly below it. 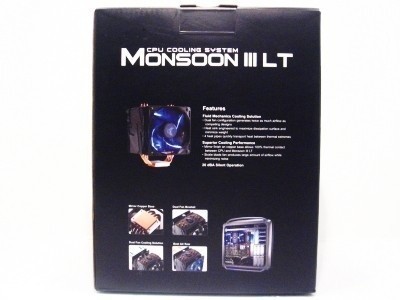 The back of the box shows the features in a list and with four individual images of said features. Something to note is that Vigor chose to place its cooler inside of a Cooler Master Cosmos case for the full on product image. 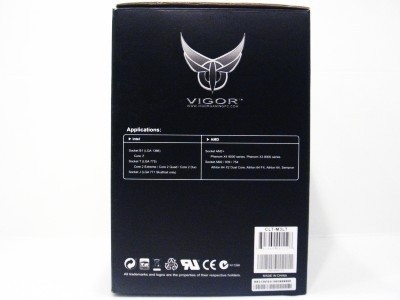 The left side of the box is again re-iterating the bubbles on the front, but this time in an applications chart. 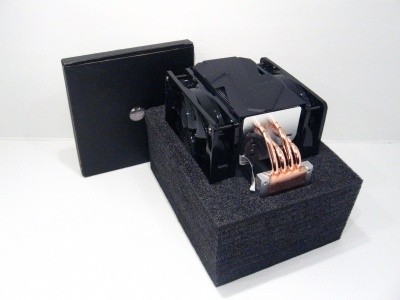 Upon removing the inner packaging and removing half of the inner high density foam packaging, this is what I was greeted with. The high density foam keeps the cooler protected from any shipping mishaps. The instructions and mounting goodies can all be found inside of the cardboard box that is shipped under the foam inside the package. 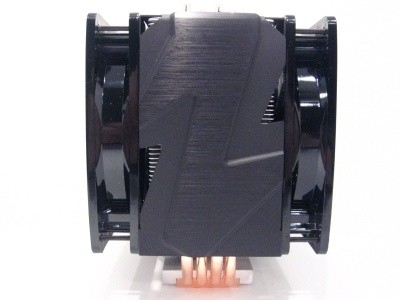 The Vigor Monsoon III LT is shipped with an all black theme. Starting on the left, there is a nine bladed, 120mm translucent black LED fan. That fan gets securely screwed to the all-black anodized centre shroud with a brushed "Z" pattern on the sides. The right side is of course a match to the left side with a 120mm fan. 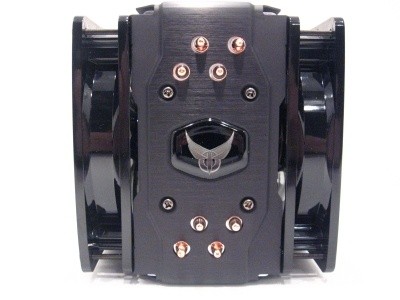 The top of cooler has a few things to look at. One is the Vigor logo nicely placed in the center of the shroud, a nice addition for those with windowed cases. Secondly, the shroud itself is all one piece and is mounted with four screws. Lastly is the protrusion of the works of the cooler, allowing the copper pipes to show which is a nice contrast to the all black exterior. 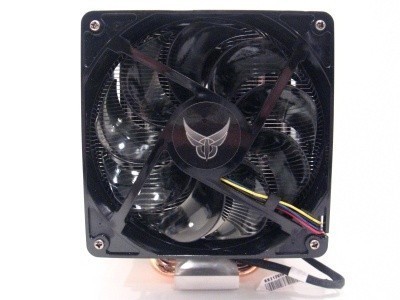 Here is a look at the coolers outbound side of things. You can see that the nine bladed 120mm fans cover almost all of the fin foot print, allowing for adequate heat transfer to the case. Don't forget there are two of these 69 CFM fans aboard this cooler. 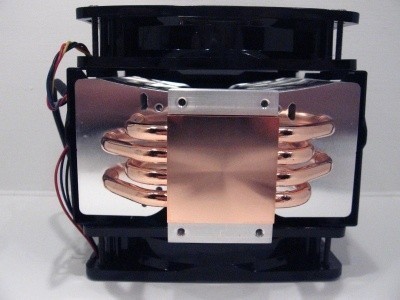 The bottom of this cooler is flat, but not what I would call mirror like. From there the four 6mm copper pipes carry the heat to the separated system of aluminum fins. Then it's all up to the fans to get rid of the heat from there. 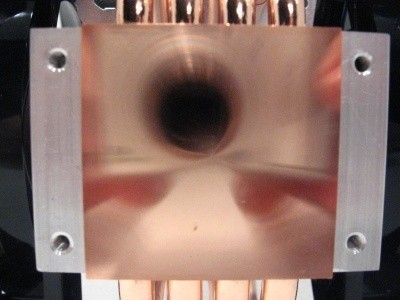 This is a closer look at the bottom. The box does specify a mirror finish, but I couldn't get an image of anything to really reflect in the base. This is with the camera within about four to five inches away, just to give a better perspective of it. 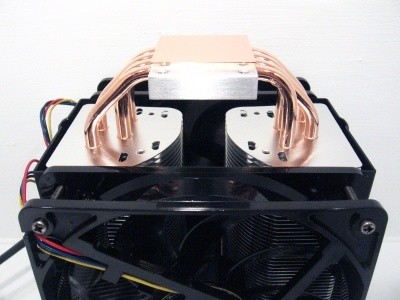 A better look at the bottom of the cooler shows the separated system of fins I referred to earlier. Each set of four pipes travels from the base to one of either fin sets, allowing for two separate coolers in essence. I have, however, seen this design previously in coolers on the market today. 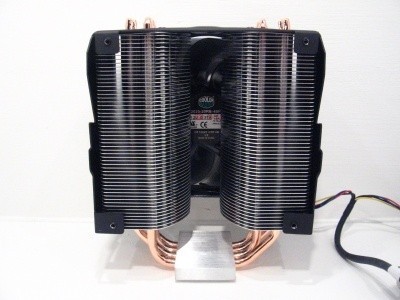 On a hunch, I decided to pull off one of the Vigor stickered 120mm fans and this is what I had found. I thought this cooler reminded me of the Cooler Master Hyper 212 and by removing the fan you can see it is very similar. The main differences are the specially designed shroud and the addition of the second fan. 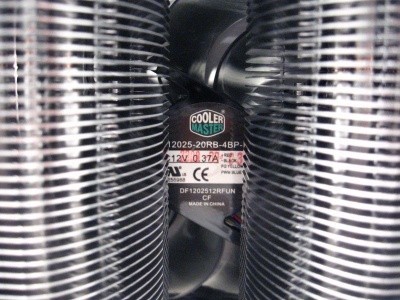 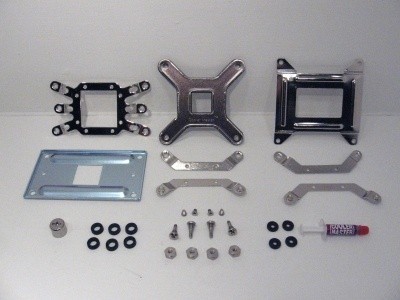 The Vigor Monsoon III LT comes with a really large assortment of parts. On the left is the supplied AMD and in the centre is Cooler Masters LGA775 kit. The new addition is the 1366 mounting kit on the right. While I have seen this with my testing for Cooler Master as well as in previous reviews here, it's a really tedious process to assemble. Once you get the motherboard out and all the parts set up it is a rock solid design, but I wouldn't mind something a bit simpler. 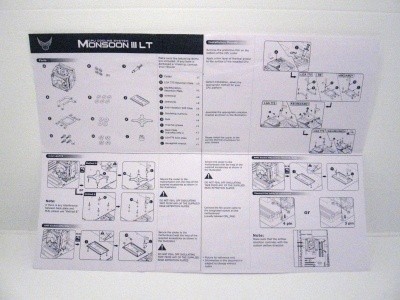 The instructions are printed to the one side of this foldout. They supply different ways to mount if clearance is an issue for the backing plates as well.

Keeping with tradition, I have been passed down the proverbial torch of cooler testing. Chris Ram was gracious enough to pass me along the testing setup to keep the CPU cooler fires burning.

The Vigor Monsoon III LT was a little disappointing. While performing better than the original design of the Hyper 212, it isn't by much. With just less than two degrees better performance at load, I feel more of the emphasis is on looks than performance with this cooler. I bet this cooler could have performed much better with twin 90CFM fans versus the 69.69CFM fans Vigor has opted to go with. 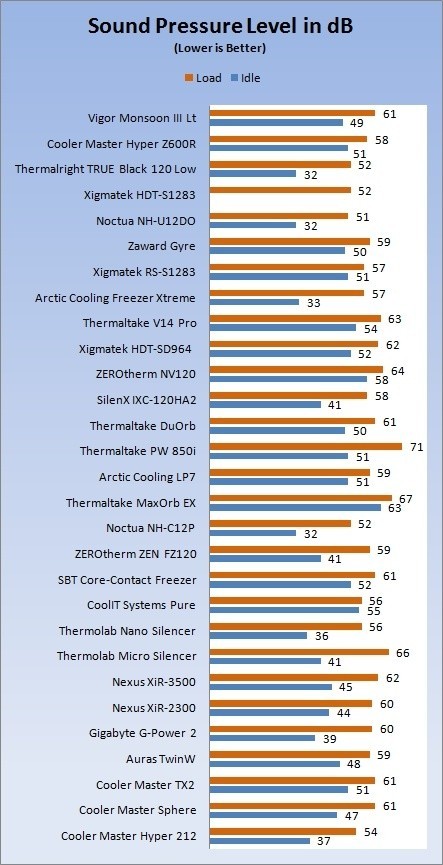 The blue LED fans supplied in this set up are quite good in keeping fan noise to a minimum. With two fans at full operation only reaching 61 dB, it isn't much louder than most of its competition.

The Vigor Monsoon III LT takes Vigor outside the realm of their previous TEC coolers. With the Monsoon III LT being an all air CPU cooler, they did admirably in their pursuit of taking a marketed cooler and adding their own touches. I would like to see more attempts at this same philosophy to other coolers as well.

You can tell by the charts, the Monsoon III LT performs well in its price range. With a two fan system the noise level is kept to a minimum and this cooler is redesigned to add a bit of flare to any rig. With this cooler being priced at $59.99, $18 above the Hyper 212, it makes it a bit tougher of a decision based on price vs. performance. If you are looking for a good cooler with little added noise, a flood of blue light from the fans and an all black look, this may very well be the cooler for you. 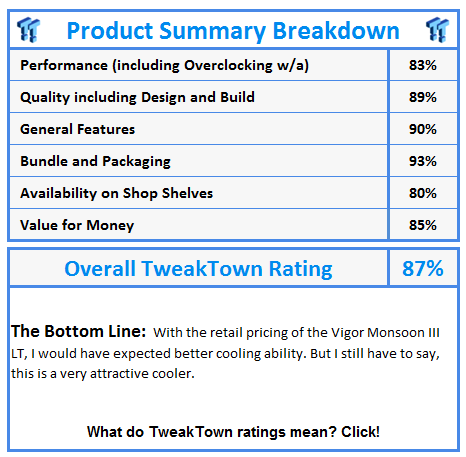