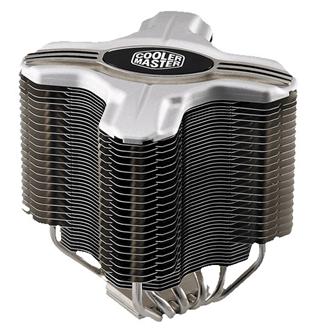 Cooler Master sends us a large number of CPU coolers a year to evaluate; more than anyone else. This level of attention from the company gives us a large amount of insight into the company's design philosophy and where they are headed with new products. For the past year Cooler Master has been content with playing the numbers; average height, average width, average cost and average performance; everything an average user could ask for. Things are starting to change at Cooler Master and the first two CPU coolers that show this change have arrived here at our lab.

Today we are looking at the Cooler Master Hyper Z600R, the first product in Cooler Masters revised arsenal that is ready to battle flagship processors from Intel and AMD. The Hyper Z600R is a large cooler with premium packaging and the ability to add a second 120mm fan. From the looks of the design the cooler screams high efficiency with low acoustic interference. Overclockers will like the coolers ability to add a second fan and average users will like the quiet nature of this beast.

Next in our list of cooler reviews will be the long awaited article for Cooler Masters flagship V8 air cooler. Be sure to check back in to see the results when both coolers go head to head, but for now enjoy the Hyper Z600R. Let's have a detailed look. 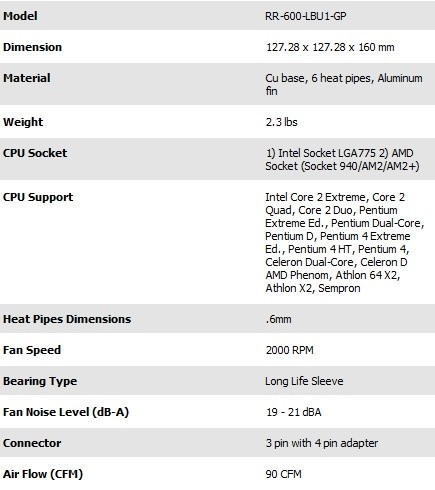 The Hyper Z600R is a large cooler measuring 160mm tall with a perfect square 127mm aluminum fin area. The base of the cooler is copper and it uses six large 6mm heat pipes to transfer heat from the base to the fins.

Cooler Master includes one 120mm fan with the Hyper Z600R that has a staggering nine blades that pushes up to 90 CFM. The cooler includes brackets for an additional fan that can be purchased from Cooler Master or one of their extensive reseller partners. The claimed decibel rating for each fan is only 21dB so it should be whisper quiet, but we will wait for the test results to get into those details.

The Cooler Master Hyper Z600R is available at Newegg for 69.99 U.S.D. but I was unable to find the cooler listed on TweakTown's Shopping Network. The cooler is new and while availability is high, most e-tailers have not got the cooler listed on their shopping engines. The cooler does have a high cost of ownership, but this is the direction Cooler Master is going with their new coolers designed for high wattage CPUs.

Other companies will follow suit, but with my current NDAs I can't divulge any more details other than to say the CPUs that will arrive later next month will need very good cooling to operate under normal situations and great coolers to overclock. As you know, you get what you pay for, so investing in a great CPU cooler will be a priority over the next 30 days. 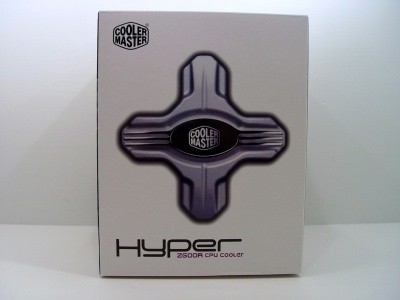 The Hyper Z600R package is a step up from the other coolers in the Hyper family. The front of the box takes a minimalist approach, almost inviting you to turn it around to see the other sides. 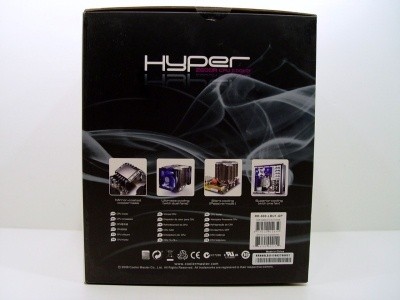 The side of the package shows us some product images and tells us in eight-teen different languages how to spell CPU Cooler. 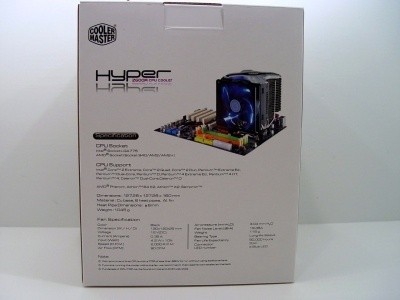 The back of the box is where the goodies are listed; the specifications and features. 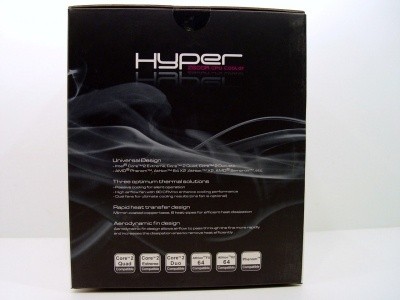 More features are listed on the other side. 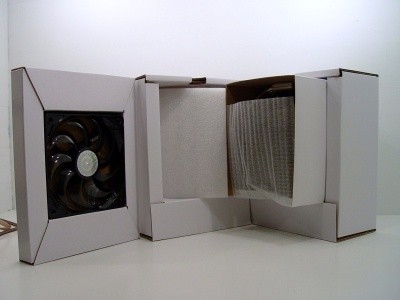 With the inner package removed you can see exactly what I mean by premium packaging. There is enough cardboard here to have a small tree, but it is used wisely and allows the cooler to be protected from all of the little parts and fan. 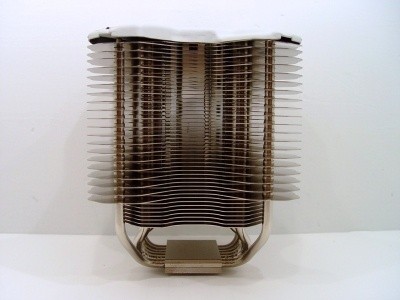 The premium nature of the Hyper Z600R carries over to the cooler itself. Here we see the fins are spaced exactly the same distance apart. If you look closely you will see two sets of fins, the larger outer fins and the smaller inner set. 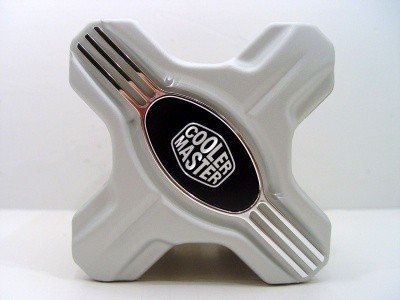 The top of the cooler brings the bling with a chrome inlay and brushed aluminum top. 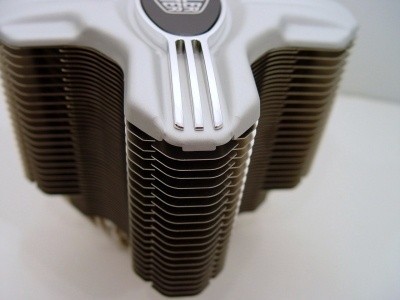 Each side of the cooler is the exact same size, so you will have a lot of options when mounting the cooling fan. Two fans will give you even more options. Each extended side has recessed room for the fan mounts. 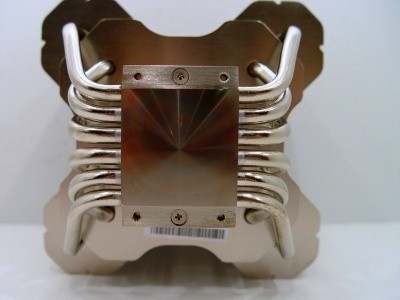 The first thing you notice when looking at the bottom is all of those heat pipes, but the focus should be on the base. The base doesn't have a mirror finish but is smooth to the touch. 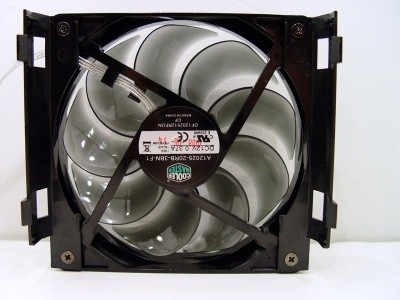 The fan screws into the mounting plates. These plates are then used to mount the cooler to the fan. Once the cooler is installed on your motherboard you can mount the fan any direction that seems appropriate. 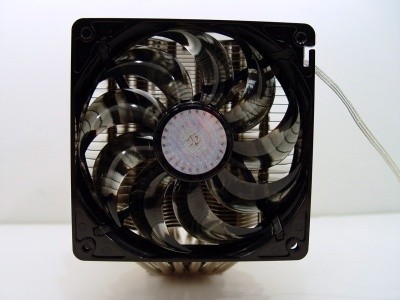 Here is a shot of those nine blades on the fan. My only complaint so far is I wish Cooler Master would have sent an extra fan so we could test the cooler in single and dual operation. 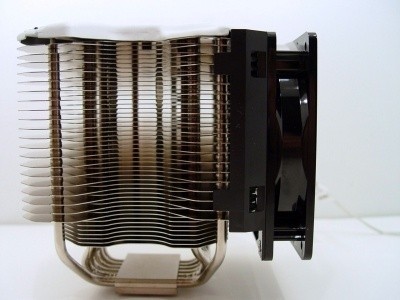 Here we see a side view of the fan and cooler joined in TweakTown matrimony. They were made for each other. 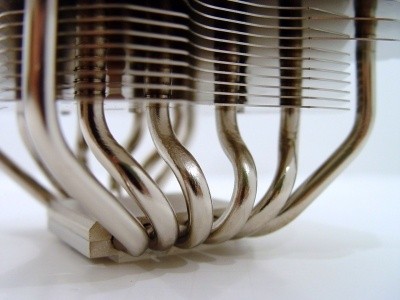 The Z600R has pipes, lots of nice nickel plated, 6mm pipes that are perfectly designed to take heat from the hottest parts of the CPU to the coolest places on the fins. This is a really good design that Cooler Master has come up with. 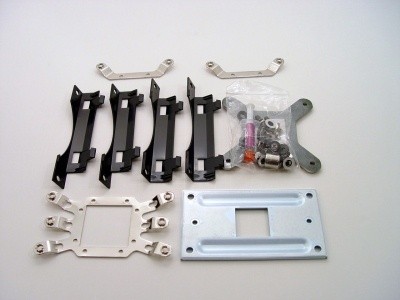 The Hyper Z600R comes with an extensive amount of hardware for mounting the cooler to both AMD and Intel based motherboards. I have been saying for the last year that the actual mounting hardware needs a revision since it is over three years old and to be honest much better solutions are available. Hopefully sometime in 2009 Cooler Master will dedicate a couple of engineers to come up with a solution that does not require the removal of your motherboard.

On the bright side, Cooler Master included enough fan brackets for two fans; a big plus for overclockers. 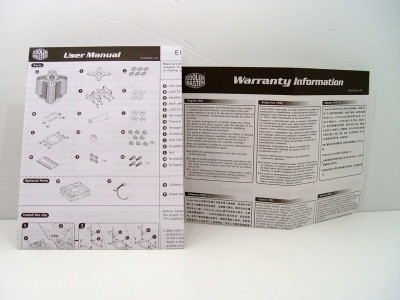 The manual is well written which is a good thing since the cooler uses a complicated mounting system. (Is this getting repetitive yet?)

The Cooler Master Hyper Z600R is an efficient cooler. We can tell this by looking at how close the idle and load temperatures are held. As you can see the cooler performs well when compared to the other high end coolers we have tested over the last couple of months. A two fan setup would be enough to take this cooler to the top of our leader board.

One of the best features is the low noise associated with the Hyper Z600R. The fan is very quiet with both 7 and 12 volts. No records were broken, but it is well above average.

The Cooler Master Hyper Z600R breaks Cooler Master out of the mold of average CPU coolers and puts them down the path of premium greatness. This is a good direction for Cooler Master and allows the company to manufacture and sell coolers that will follow what the company has achieved with their premium line of cases such as the Stacker and new ATCS 840.

The performance of the new Hyper Z600R is spot on to where the price is listed. Either way you look at it, from the perspective of an overclocker or someone looking for great cooling with little acoustic noise, the Hyper Z600R is a great little cooler that fits the bill.

My only complaints are the lack of a second fan with the cooler; this is a common practice but it would have been nice to see Cooler Master break the norm. My other complaint is one that I have been talking about for the last year, the mounting hardware and the way the cooler mounts to the motherboard. It is time for Cooler Master to take a good look at what others are doing and at minimum follow suit or dazzle us with a totally new design, which I am positive their engineers are capable of doing. 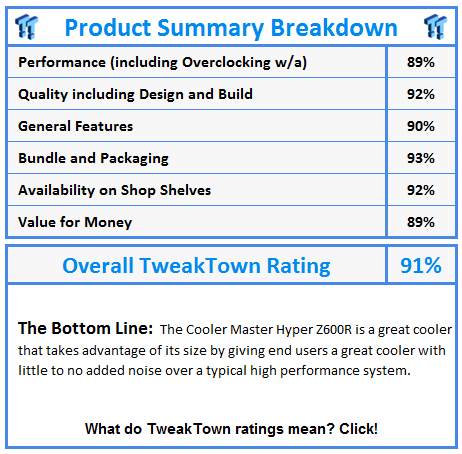